LAWRENCE, Kan. – Kansas baseball (3-4, 0-0 Big 12) heads to St. Louis to take on the SLU Billikens (1-7, 0-0 Atlantic 10) March 5-7 at Billiken Sports Center. The Jayhawks were originally scheduled to face Lipscomb in Nashville this weekend, but due to COVID safety protocols within the Bison program, the series was canceled.

The Jayhawks last played a four-game series at FGCU, falling to the Eagles 1-3. Kansas opened the series with a 5-3 victory behind strong pitching performances by Ryan Cyr and Jonah Ulane. Cyr tallied his second game of the season with seven innings pitched, while earning his second victory. Ulane pitched the final two innings for the Jayhawks earning his first save of the season.

Nolan Metcalf boasts team highs in batting average (.440), hits (11), home runs (2), RBI (8) and total bases (19). Skyler Messinger was effective against the FGCU pitching and improved his average to second best on the team (.348). Messinger has started all seven games and has eight hits, two doubles and four RBI. Anthony Tulimero, who has started six of the seven games behind the plate, is tied with Metcalf for the team lead in plate appearances (25). The redshirt-freshman has 13 total bases, while leading the Jayhawks in doubles.

Cole Larsen continues to make his presence felt on the mound, he has tallied back-to-back games with nine strikeouts. The right hander has a team-best 1.80 earned run average (Min. 5.0 innings pitched) in 10 innings pitched this season. Larsen is the team leader with 18 strikeouts, while Cyr is second with 15. Eli Davis joined Larsen in pitching a complete game last Sunday, both going six innings against the Eagles. Davis is 1-1 on the season with 13 strikeouts in 11 innings pitched with a 2.45 ERA. 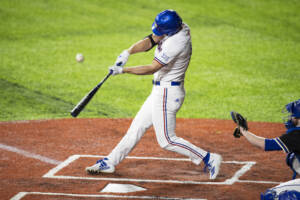 OPPONENT PREVIEW: ST. LOUIS
St. Louis opened the season with an 8-7 victory at Kennesaw State before droppings its next seven games. The Billikens finished their series with KSU 1-3, before being swept by North Dakota State. St. Louis dropped a 10-run contest to SIUE March 2.

Kyle Fitzgerald and Cam Redding lead the Billikens at the plate. Fitzgerald is second on the team with a .296 average (8-for-27), while tying Redding for the team lead with 11 total bases. Redding has a .269 average wile leading St. Louis with seven RBI and a home run.

Five pitchers have earned starts for St. Louis, with Trevor Harris leading the team with three. Harris is the team leader in strikeouts (14) and walks (10), while posting a 6.30 ERA. Grant Fremion has made the most appearances (4) this season for St. Louis.

UP NEXT
Kansas hosts Omaha for a four-game series March 12-14 at Hoglund Ballpark for the Jayhawks first home games of the season.