"We’re super excited to announce our 2021 class. We’ve added two front-line players, as well as another big shooting guard. All three of these signees possess high-level international experience, good size and skill level at their positions and exceptional basketball IQ’s. As a staff, we feel these young women fit our culture and vision for the program perfectly." 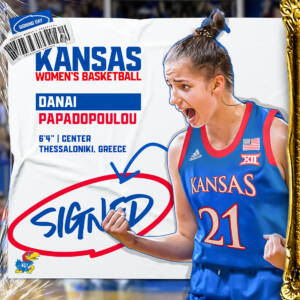 Papadopoulou, a 6-4 center, comes to Lawrence from Thessaloniki, Greece, where she competed on the national stage as a part of the Greek national team with current Jayhawk Ioanna Chatzileonti. In the 2017 FIBA U16 Women’s European Championship, Papadopoulou averaged 11 points, 3.8 rebounds and shot 85.5% from the field.

More recently she competed in the 2019 FIBA U16 Women’s European Championship where she averaged 5.9 points and 6.6 rebounds in August of 2019. Papadopoulou also plays for her local club, Panathlitikos, which is a part of the Greek Women’s Basketball League. When she gets to Kansas, she plans to study engineering.

“Danai is a skilled back to the basket post player with good hands, good feet and a soft touch around the rim,” said Schneider.  “She comes from a basketball family and understands what it takes to compete at the highest level.”

“I am really excited about this opportunity,” Papadopoulou said. “It was a great combination of high-level basketball and high-level academics that helped me with my decision. The recruiting process was great. I love what Kansas has to offer and the history of the program. Coach Brandon and Coach Jhasmin (Player) spoke with me and my family about how awesome everything is in Lawrence and I was sold. I’m excited to join the family.” 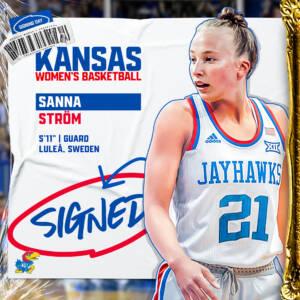 Ström joins the Jayhawks as a 5-11 guard from Luleå, Sweden. Ström has not only played on the national stage but has won on it as well. In the women’s U16 Division B, her team placed first in the European Championships. She has also won first, second and third place at the Swedish Championships with three different teams. With her club team, RIG Luleå, she placed first in her local league on the Division I level.

Ström has also been selected to play on two different all-star teams. She earned a spot on the Swedish Championships all-stars team and on the European Girls Basketball League (EGBL) all-stars squad, where she also was dubbed the league’s Most Valuable Player.

“Sanna is a big shooting guard who can score at all three levels,” said Schneider.  “She has a terrific release with deep range and has a great feel for the game. She’s strong and plays tough on both ends of the floor.”

“When I was on campus, I really liked everything,” Ström said. “I also liked all the coaches and they were very welcoming! Coach Jhasmin gave me a ton of information and made me feel really comfortable in making my decision. I felt like Kansas would be a good fit (for me) because of those things and also the way they play and their ambitions for the future.” 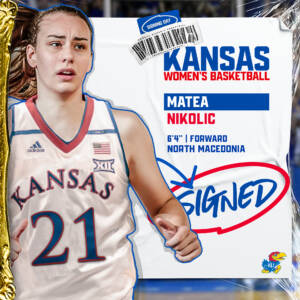 “Matea is a versatile forward with tremendous size and strength,” Schneider said. “Her offensive skill set makes her a very difficult matchup, and she has the potential to take our front line to another level.”

Nikolic has also played on both the U16 and U18 counterparts of the North Macedonian national squads. In 2019, when she represented North Macedonia at the European Championships U18 Division B, Nikolic averaged seven points and four rebounds in three games. In that same year, Nikolic competed with a Division I professional Spanish team.

“I love the history of Kansas basketball,” Nikolic said. “I am impressed with everything KU has to offer with the basketball program. I am really looking forward to playing with the team, especially the international players. I also enjoyed getting to know the staff during the recruiting process. They all believe in Coach Brandon’s coaching philosophy. I really appreciate how Coach Player and Coach Brandon were patient with me through this process and believed in my talents and abilities. Due to COVID, I was not able to visit campus, but I am looking forward to meeting my new Kansas family and seeing the beautiful campus in person.”