The call for racial justice over the past months has put a spotlight on athletic departments to step up and let their athletes speak out. Kansas Athletics provides a platform for student-athletes to share their experiences and encourage others to make a change. Countless resources are offered to student-athletes to support them in any way necessary.

In under 24 hours, the University of Kansas women’s basketball team organized and led an on-campus march for social justice. The rapid turnaround of this idea, sparked in their locker room the day before, shows how athletes’ voices are being put into action.

“Our young women deserve all of the credit,” women’s head basketball coach, Brandon Schneider, said. “This was their idea and I just couldn’t be prouder of their voice and their ability to put together such a successful, peaceful march.” 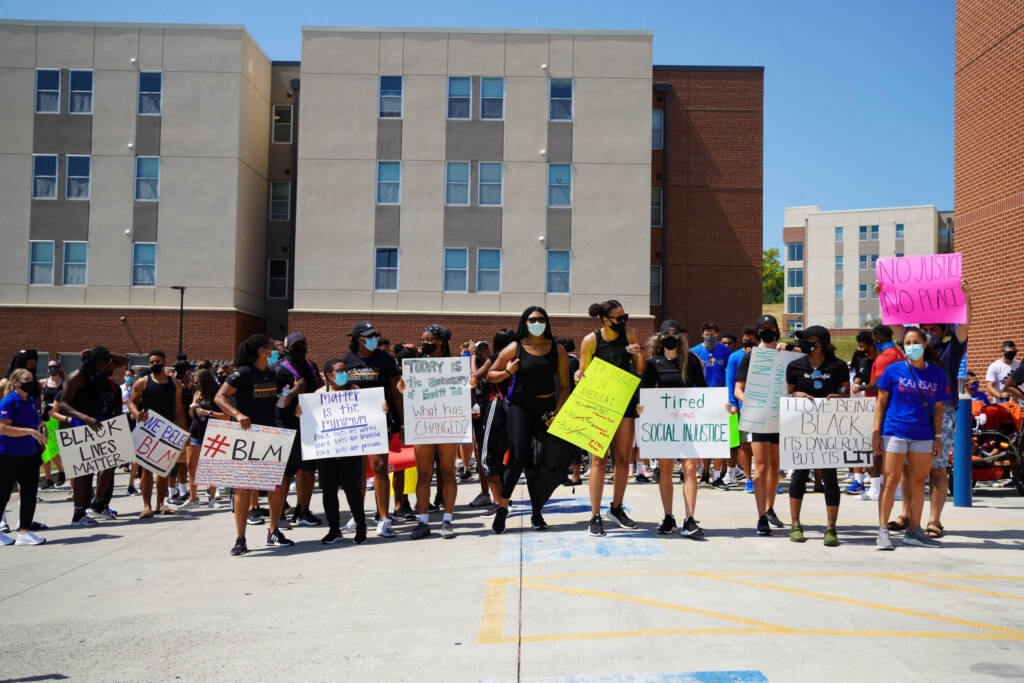 The unity of Kansas Athletics is of utmost importance. As the statement released after recent social injustices occurred said, the department is devoted to supporting all of its student-athletes.

“In a lot of places, talking is important, but we want to challenge you as student-athletes to take action,” Jeff Long, KU athletic director, said. “This [march] happened like a fire hitting flat paper because these women stood up, announced it and then we went and helped them make it happen.”

KU men’s basketball also focused its attention on social injustices, conducting team activities where conversation and personal experiences could be shared. The team watched the 2016 movie “13th,” brought in law enforcement to talk with the team and listened to a Brown v. Board of Education presentation. 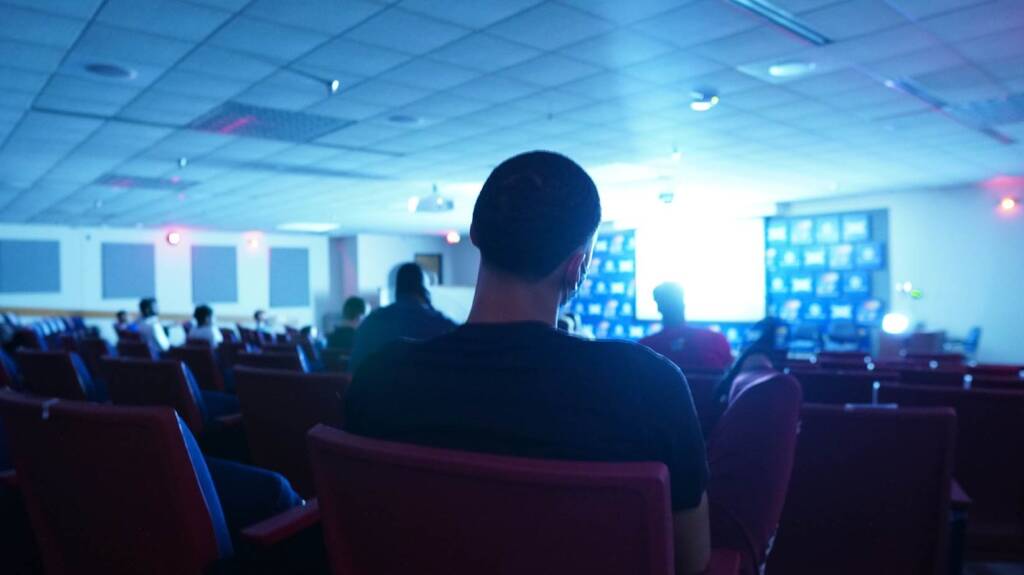 “I think that Athletics has done a fantastic job of making sure we feel like we are in a safe place and a safe space to talk and express how we feel with everything going on during this time,” David McCormack, KU men’s basketball player, said. “You’ve got to look beyond the jersey. I’m not just a basketball player, I’m a person.”

McCormack is also a member of the KU Task Force Committee. According to the junior forward, the task force is a place where activists from all backgrounds are able to share ideas on how to make Lawrence more inclusive.

Bill Self, KU men’s basketball head coach, continues to speak on behalf of his team and others experiencing the effects of social injustices. 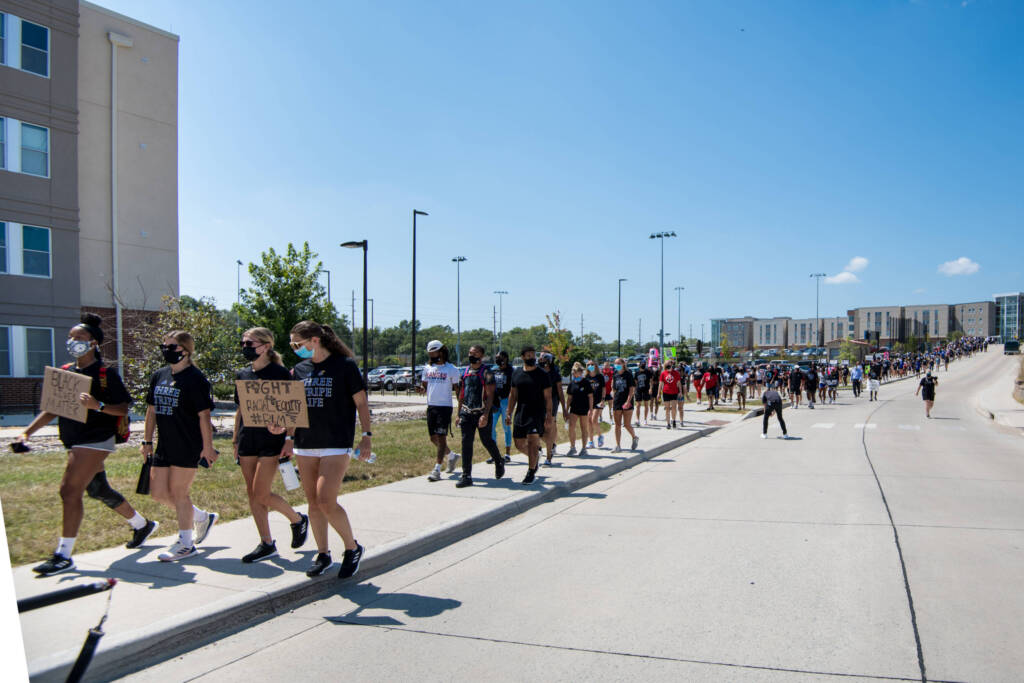 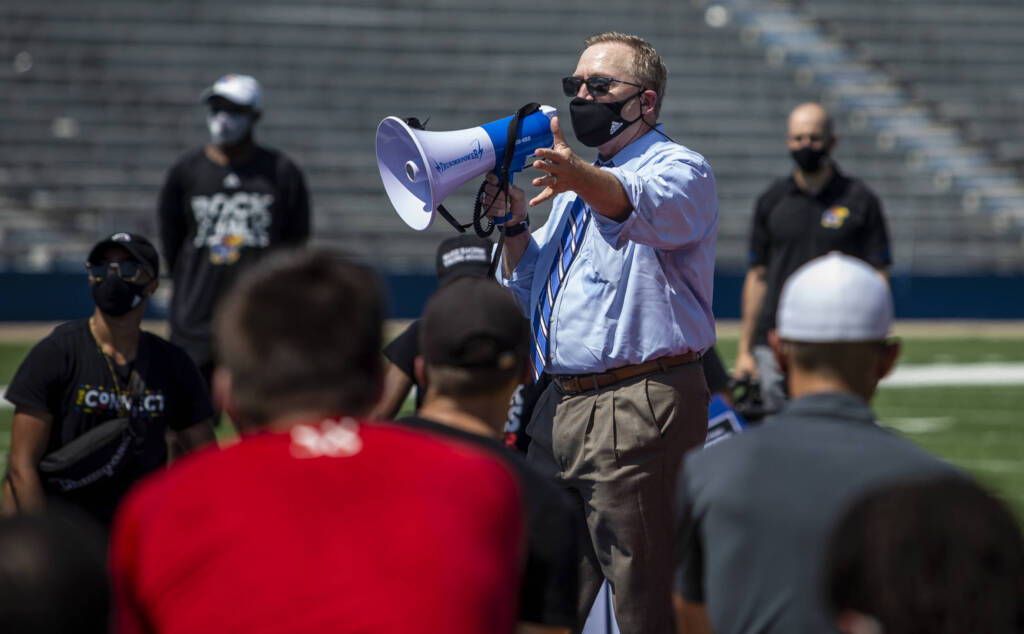 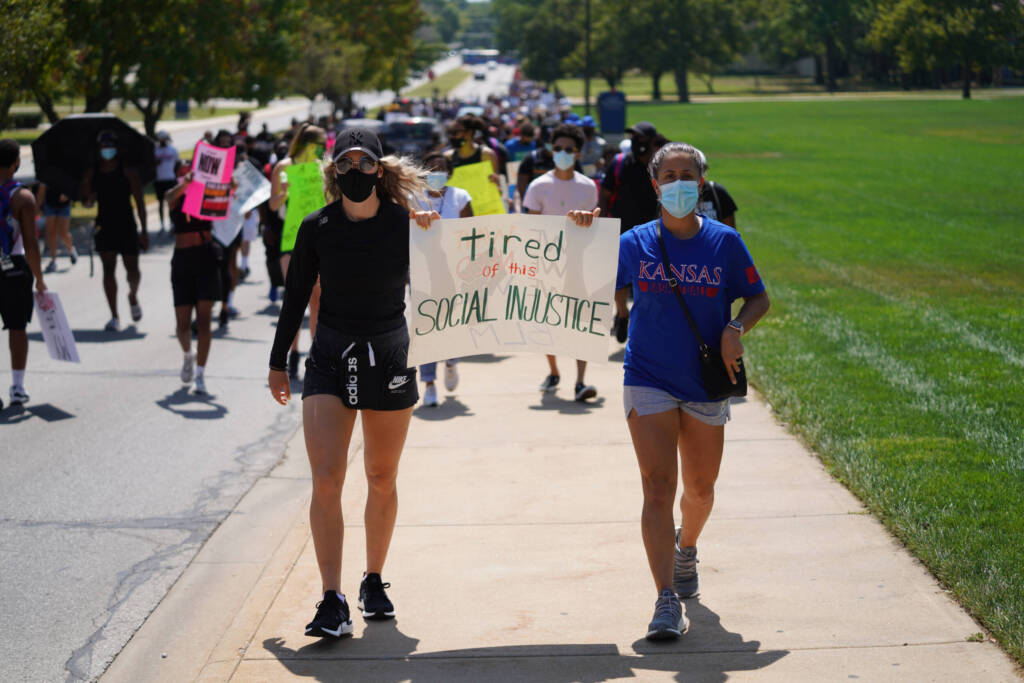 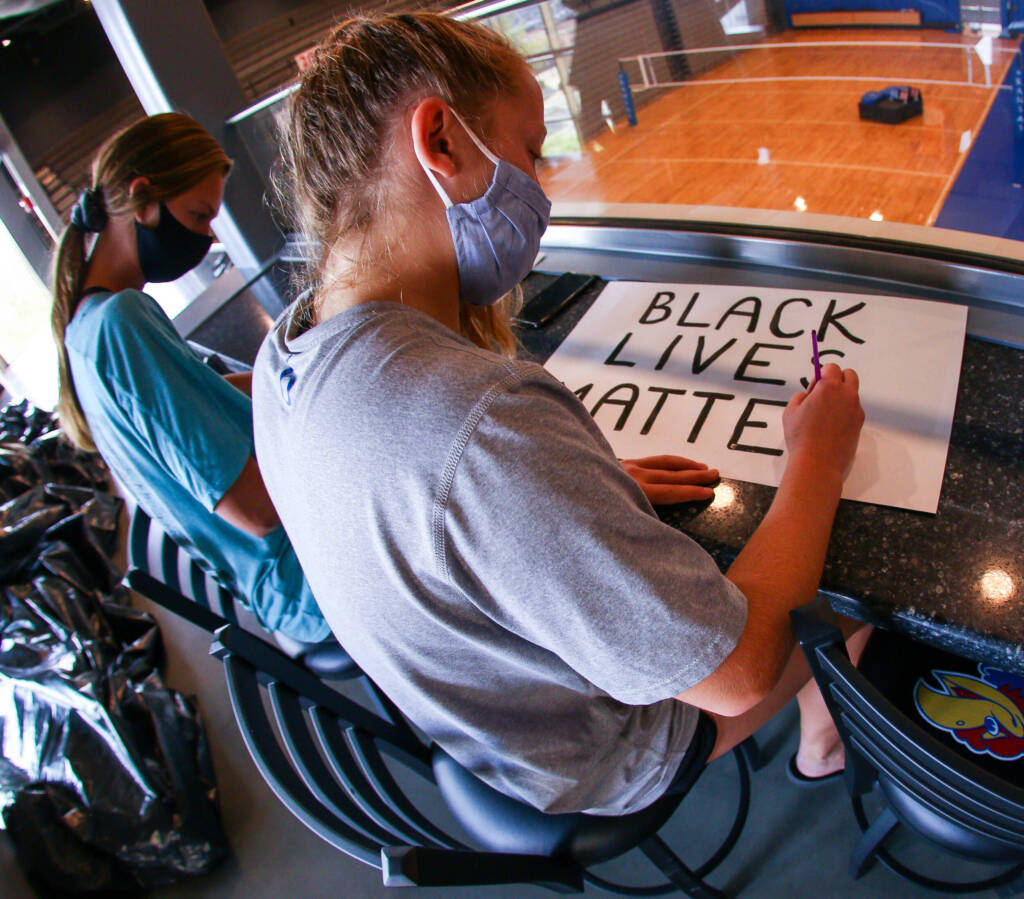 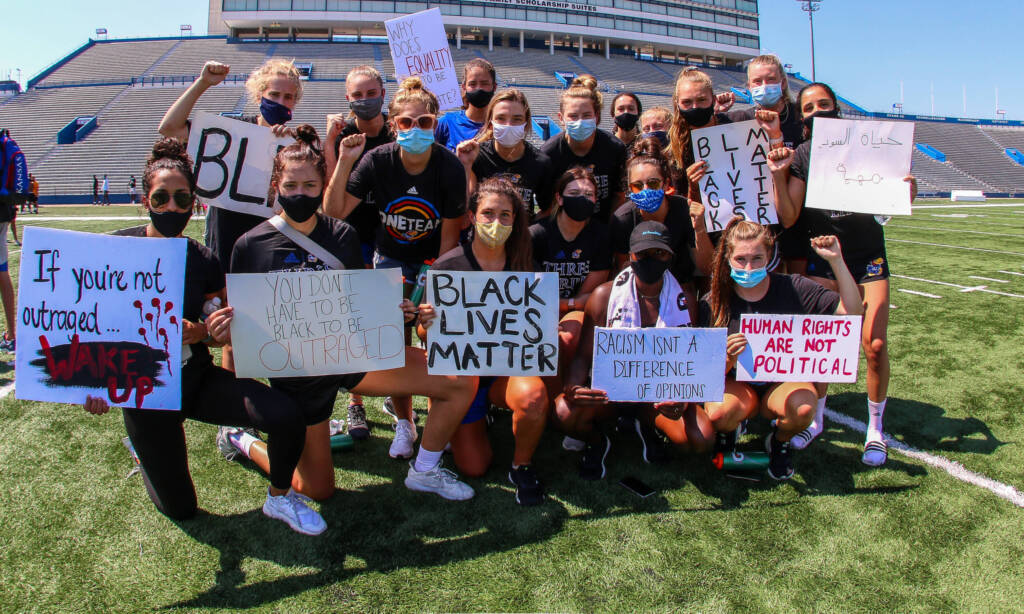 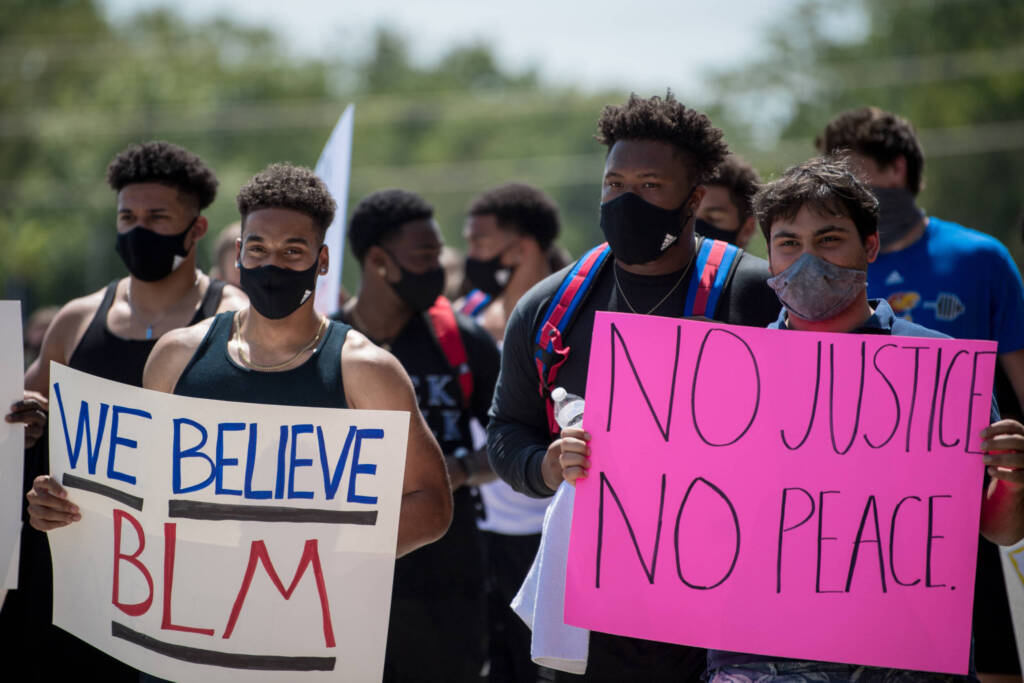 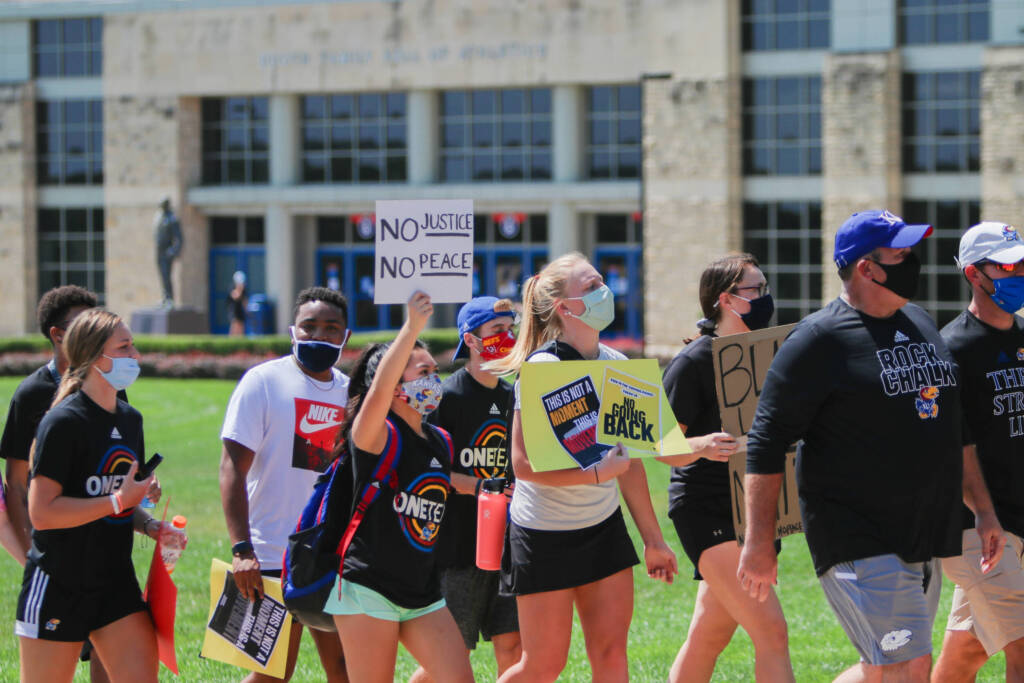 Women’s basketball, in addition to the march, brought in Dr. Angela Charlton, sports psychologist, to talk about enacting change as black female athletes. The team also participated in a voter registration drive with KU’s R.I.S.E., spoke with Dr. Barbara Ballard about leadership and hosted a presidential debate watch party.

Lawyer Rhavean Anderson, a former KU track & field student-athlete, and James Minor, a leader in the Lawrence NAACP, attended the watch party. After the debate, athletes were given the opportunity to ask them questions.

Many other Jayhawk teams have also taken the time to share personal experiences and discuss their viewpoints on social injustice. Many of the conversations have created a greater understanding among teammates according to many Kansas student-athletes.

“We all have the same mindset. We all love each other. We all support each other and it’s just amazing to be in a program that cares so much about you as a person and your skin color, everything,” KU women’s basketball player, Emma Merriweather, said.

Empowering student-athletes to speak their mind on social injustices is an athletics-wide movement. Coaching staffs across many sports have spoken out about how they recognize injustice and want to help their student-athletes make a change.

“We need to listen, respect and value the lives of those individuals who continue to be mistreated,” Les Miles, KU head football coach, said. “We must use our voices and platforms to drive positive change and promote equality.”