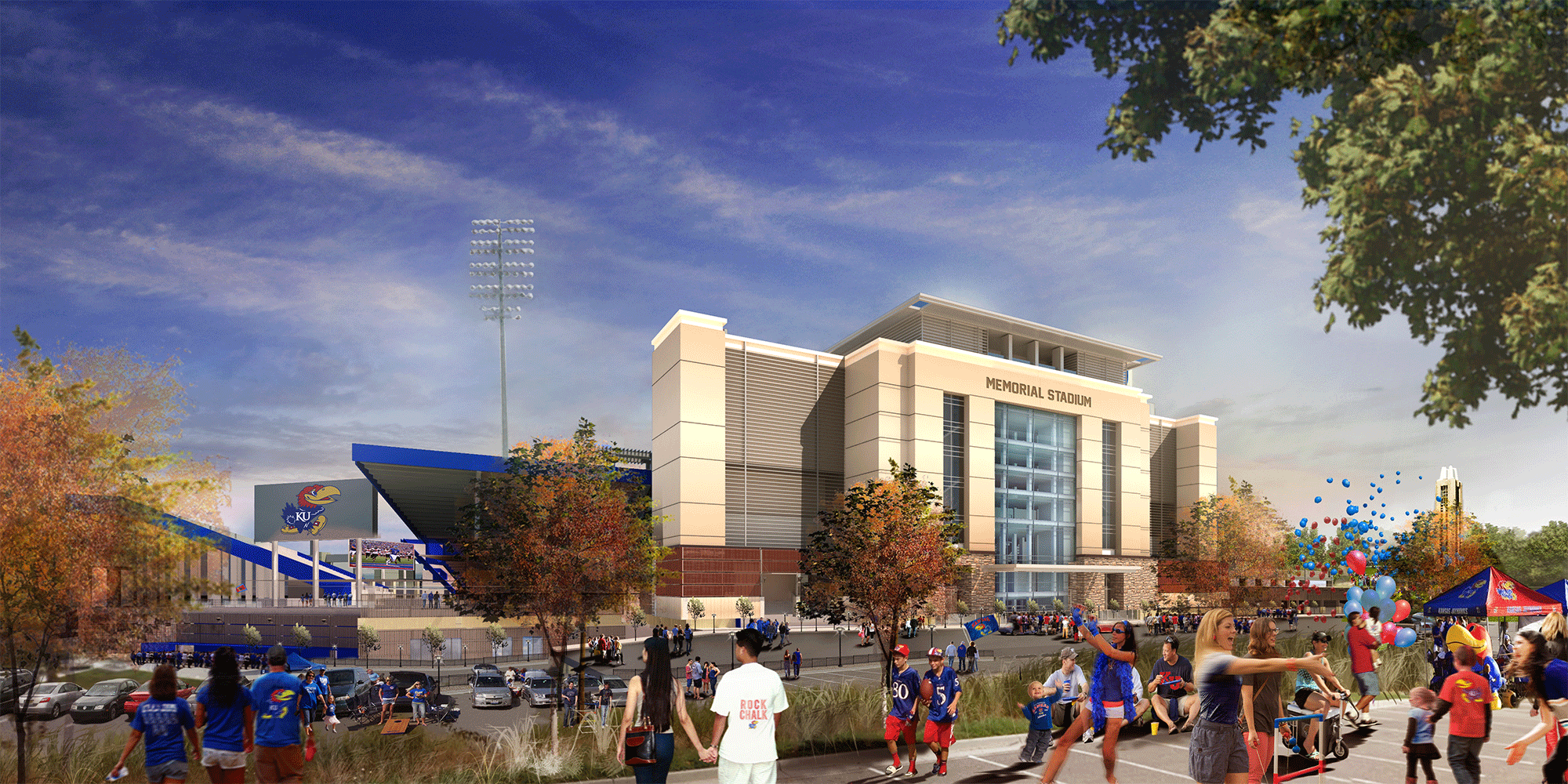 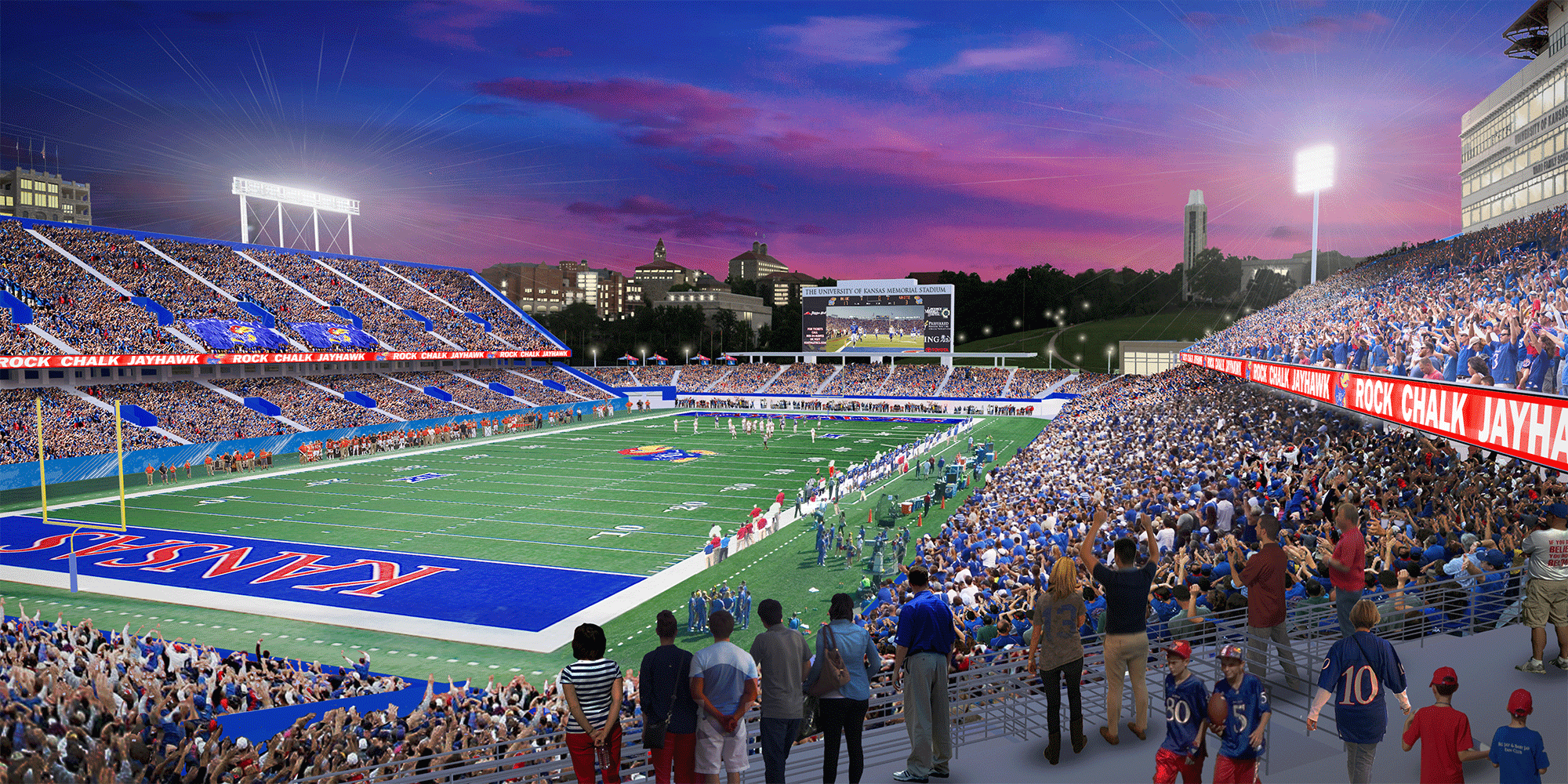 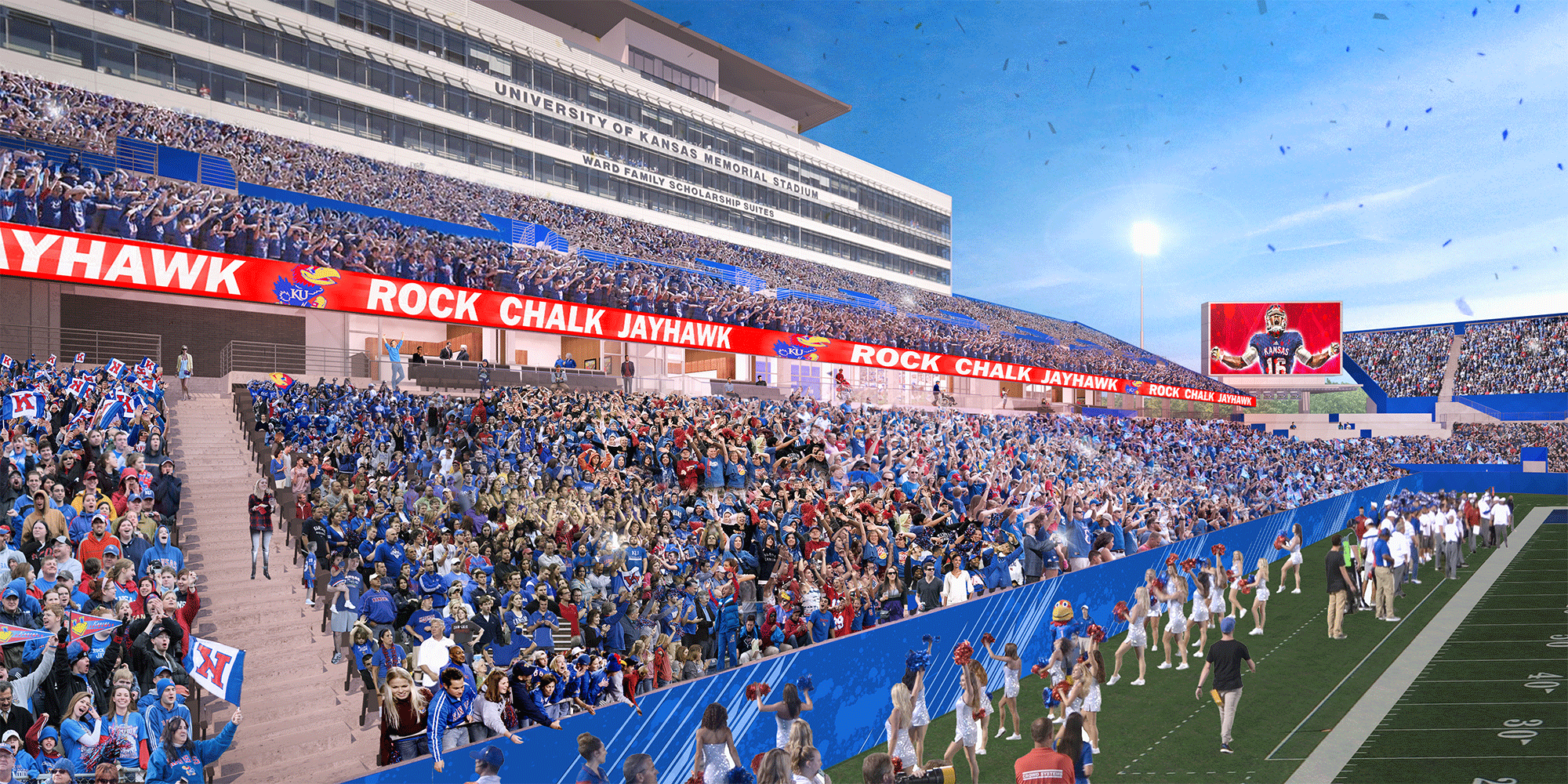 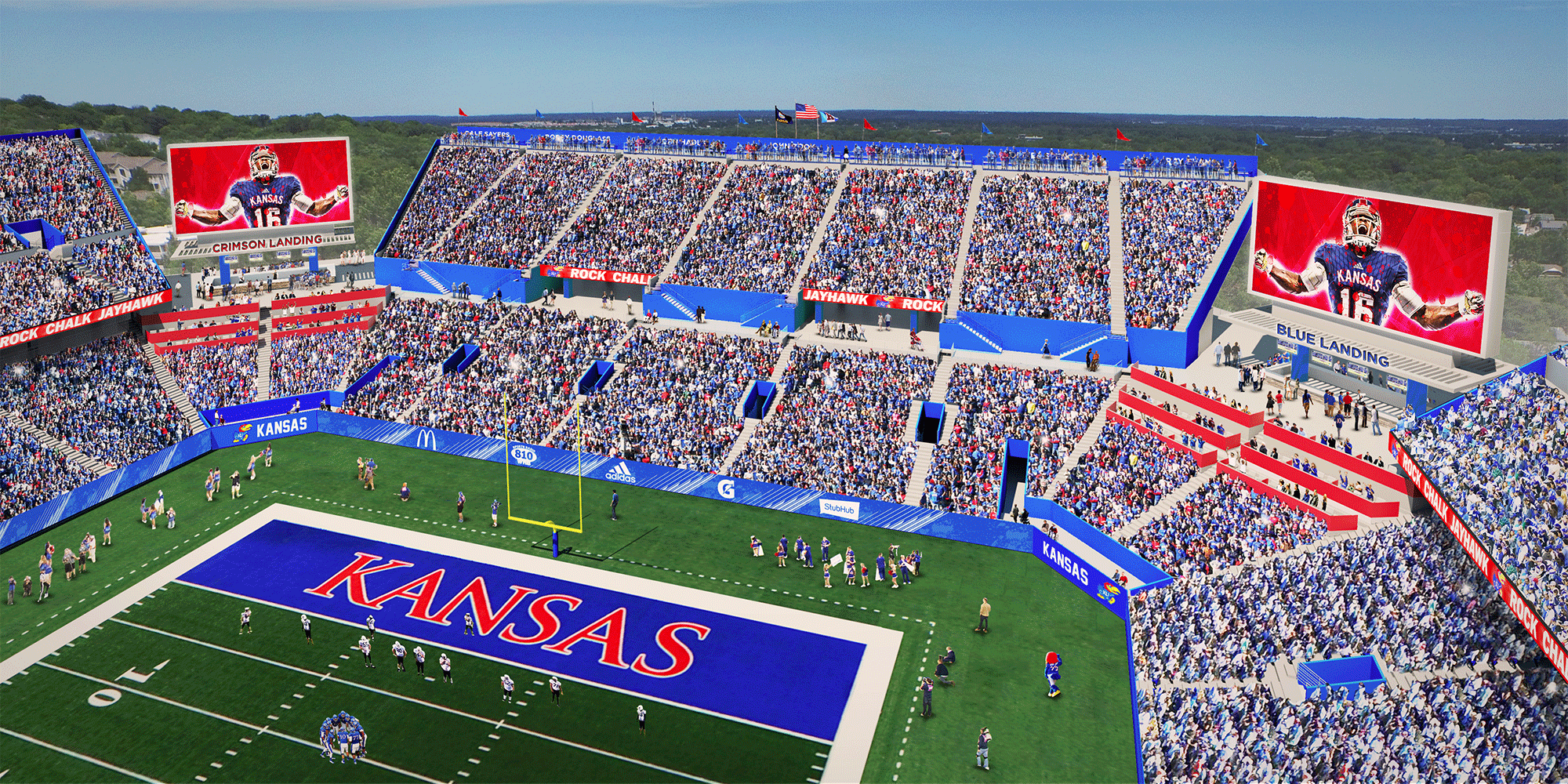 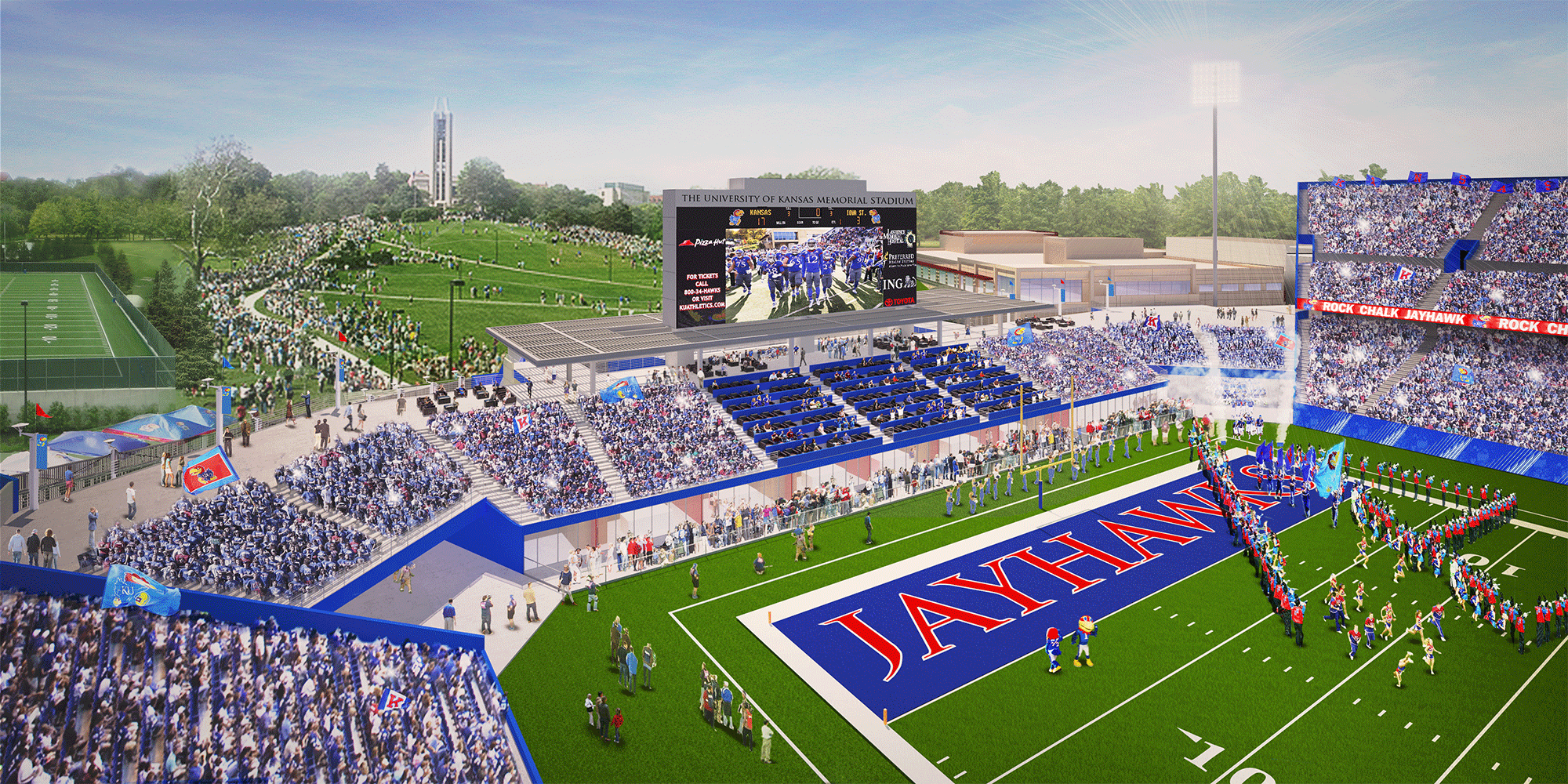 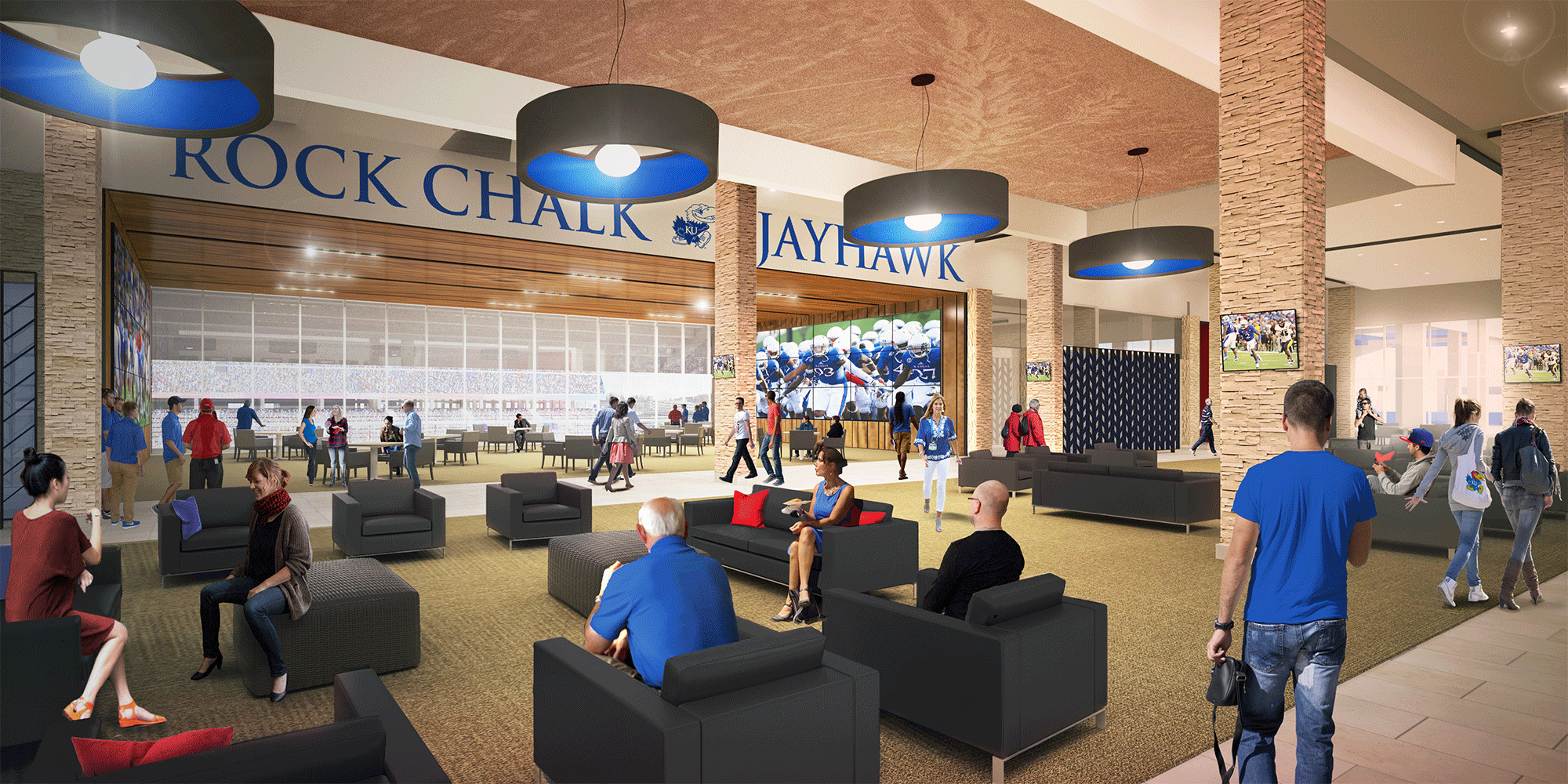 The largest gift in the history of Kansas Athletics has kicked off Raise The Chant, a transformational $350-million fundraising campaign, focused primarily on football.

Friday evening in Lawrence, during a dinner at The Jayhawk Club with some of Kansas Athletics’ most generous benefactors, University of Kansas Chancellor Douglas Girod and Athletics Director Sheahon Zenger shared their five-year, $350 million Athletics strategic vision.  Kansas alumnus and benefactor David Booth attended the dinner and boldly kicked off the campaign with a $50 million pledge, the largest in Kansas Athletics history.

The Booth gift will launch far-reaching improvements to Memorial Stadium, Girod and Zenger said, beginning with the construction of an indoor football practice facility immediately following this season.  Improvements to the south end zone and the west side of the stadium will follow after the completion of the 2018 season; enhancements to the north end zone and the stadium’s east side will commence at a time to be determined. Renovations will include a variety of premium seating options at all price points, enhanced fan amenities such as suites, lounges, reserved chairback seating, concourse viewing decks, expanded concourses and premium concession options.

“In listening to Sheahon’s vision of many years,” Booth said, “and believing in where Coach Self’s program is and where Coach Beaty’s program is headed, I am proud to support my alma mater’s athletic program.  I believe Sheahon’s plan for football and basketball is essential not only to the future of Kansas Athletics, but also to the university as a whole.”

“The Raise The Chant campaign, with its primary focus on football, addresses an institutional priority for the University of Kansas,” Chancellor Girod said.  “A competitive football program benefits the entire university and is important for KU to continue being a strong member of the Big 12 Conference.  In recent years, we have transformed the university with nearly $1 billion in new and renovated facilities, and this is the next step in that transformation.  I have the utmost confidence in Sheahon and believe we have the right people at the right time for this campaign.”

The comprehensive campaign comes on the heels of six years of unprecedented athletic facility growth in soccer, men’s and women’s track & field, softball, tennis, and men’s and women’s golf.  This six-year period of expansion also includes the construction of the DeBruce Center – the home of the original rules of basketball – and McCarthy Hall, the impressive new residence for the men’s basketball team and other exceptional students.

The generosity did not end with Booth.  Girod and Zenger announced that Stewart Horejsi, a long-time KU benefactor, has further enriched the campaign with his family’s $10-million pledge, which will enable Kansas Athletics to construct a new, 3,000-seat arena for the nationally ranked and defending Big 12 Conference Champion volleyball program.  Construction on the Horejsi Family Volleyball Arena will begin immediately following the 2017 season.

“My family and I have been thrilled to watch all the success of KU volleyball as it outgrew the current Horejsi Family Athletic Center,” Horejsi said.  “We loved the concept of the new arena, especially Sheahon’s vision of connecting a hospitality area to the existing one in Allen Fieldhouse.  That will take fan enjoyment to a new level.  We look forward to watching great Big 12 and NCAA matches in the new Horejsi.”

Girod and Zenger also announced other major gifts to the campaign from long-time, dedicated Jayhawks, including Dana and Sue Anderson, of Lawrence, and the Mike Beatty family, of Salina.  They also said this campaign includes the renovation of Hoglund Ballpark, home of KU’s baseball program.

The successful renegotiation and extension of KAI’s apparel rights agreement with current partner adidas was also shared with the group. One of the largest such contracts in college athletics, it will provide $191 million in sponsorship and apparel over the next 14 years.  “This is a strategic partnership,” Zenger said, “a comprehensive, institutional approach unlike any apparel agreement in the country. It will not only help us achieve our goals of renovating Memorial Stadium and Allen Fieldhouse, but it will also reflect adidas and Kansas Athletics’ commitment to academics and community involvement.

“We want to extend a heartfelt thanks to our generous donors,” Zenger continued, “in particular David Booth, and Stewart Horejsi and his family.  They, once again, have not only bought in to our vision of what Kansas Athletics can be, but also have actively participated in that vision.  We appreciate very much the leadership they have shown, and we are confident that others will follow their lead and help make that vision a reality.  I’d also like to express our appreciation to Dale Seuferling and the KU Endowment Association for its leadership as we embark on this important campaign.”