Mason Finley – Let’s Do This Again

I remember feeling like a deer in the headlights when I experienced the Olympics for the very first time in 2016. I didn’t know what to expect.

Everything was just so brand new.

There was this storm of people and energy unlike anything I’d ever seen before. Just coming out from the stadium and witnessing that crowd—it was just like, wow, man. All of this stimulus within an instant, you know?

But things are different this time around. Maybe it’s because I’ve been here before, or it could be the fact that I’m really good friends with nearly all of the competitors today.

But something else has changed in the last five years.

I’m married with a baby girl coming on October 31. So I’m more secure in my goals and who I am as a person now than ever before. I think it just puts everything into perspective. My identity is more of a husband and soon-to-be-father, and throwing is no longer life or death.

That storm, for me at least—it’s gone.

Back in the days

The goal still remains the same that it’s been ever since I was a kid watching the 2004 Olympics on TIVO. Does anyone remember those days?

Whether it’s gold, silver, or bronze, I’m looking to take home a medal.

When I was younger, other athletes would talk about the importance of winning a medal. You can go out to small meets and throw far, and it still means a lot, right? But doing it at the Olympic Games, I don’t know man—it’s just another level.

That’s where it all counts. It’s the reason for all of the training.

Winning on that stage means an athlete really achieved the highest level of success in their game. No, throwing isn’t life or death, but I still want to experience a moment like that one—you know, standing on that podium.

Growing up, I remember watching the sport and seeing these really tall, super athletic guys throwing the discus and just marveling at how effortless it was for them. I was just a kid throwing in the yard with my dad at the time.

But seeing all of the fans there at that Olympic event, I never stopped thinking about how cool a moment like that would be to compete and win.

I kind of got that itch.

And I’ve had it ever since.

That itch carried me to multiple state championships in high school and eventually being recruited by the University of Kansas.

One thing I’ll always remember is my recruiting visit there. I knew so little about college sports, and I saw a shirt with the words “Believe in Self” written on it. I bought it thinking it was like, “Believe in Yourself.” That’s pretty cool, right?

But it was really talking about Coach Bill Self for the basketball team. That was just one of those fun moments where I looked back and saw how passionate the Jayhawks fan base was about their sports.

It was a good selling point.

Once I met Throwing Coach Andy Kokhanovsky, that’s when I knew KU was the best place for me to turn my Olympic dreams into a reality. We hit it off right off the bat, and I just got a really good vibe from him.

Over a decade later, Coach Kokhanovsky is still by my side, helping to train me in my efforts to win a gold medal.

I came in looking for a coach that I got along with and ended up finding a lifelong friend and mentor instead. 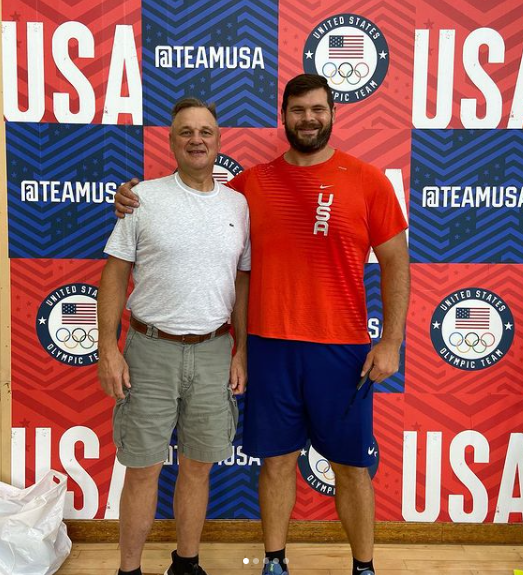 But as much as things are the same, they’re very different in my second rodeo. Do you want to know the coolest thing about heading into the Olympics this time around?

My family doesn’t care much about the outcome.

For the lack of a better word, they couldn’t care less how far I make it. I can hear my mom right now, “Just be safe and don’t hurt yourself.”

At the end of the day, my wife and the rest of my family are happy just to see me happy. That’s something you can’t put a price tag on. To them, I’m a winner before I even go out there and compete in front of the rest of the world.

Of course, my goals are still to get on the podium and go for that gold medal. On second thought, honestly, any medal for me is just as good as gold. I’m just very relaxed and ready to go.

Even though I’ve been here before, there’s still going to be things I might not be used to because we’ve never done an Olympics under these circumstances. But I just feel like I’m going to take any weird COVID adversity in stride and just have a good attitude about it. I’m just so happy that the games are even happening.

To even have this opportunity for a second time, I just feel super blessed.

I have a feeling this trip to the Olympics is going to feel like more of a business trip, and I’m completely okay with that.

There’s usually a lot more experience that goes into the event. You’d normally get to walk around, take in the sights and see the city, but things will be different this time around. You basically have one day to get ready, then you compete and leave the next day.

But I’m ready for business. I’m ready to achieve that synchronicity between my body and mind at the highest level just like I did at the World Championships back in 2017.

If I could choose the most defining moment in my career, it would probably be that performance. I went out for a Diamond League meet, and I wasn’t throwing well. I remember just being really frustrated, nervous, and anxious. I was feeling every adjective in the book at that time. But it forced me to come to a crossroads, and I had to make a decision.

Am I going to continue blasting these throws out, or am I going to focus on doing the movement?

That was one of the few times I’ve been able to do it at such a high level with a lot of pressure. And it felt amazing.

It changed who I am as an athlete. Before that meeting, I was the type of athlete that tried to harness the pressure and turn it into energy somehow, you know? But in that moment, I realized I didn’t need that anymore.

In that moment, I finally understood that I’m at my best when I’m relaxed and just enjoy the moment.

Because win or lose, the most important gold medal is waiting for me back home.