Jayhawks unable to knock off Cyclones

AMES, Iowa – Kansas was unable to walk away with a victory against Iowa State in Hilton Coliseum Wednesday night, falling to the Cyclones in three sets.

The Jayhawks did their best to try and steal the first set from the Cyclones as they held a 22-21 lead late in the set. However, ISU rallied to win four of the final five points to win the set 25-23.

KU continued to battle against ISU in set two, but the Cyclone attack pulled away after the first 10 points to gain a two-set advantage.

Freshman Morgan Christon led the Jayhawk attack early through the first two sets and continued to exert her talents against Iowa State in set three.

After falling behind early, the Jayhawks found a way to rally back and tied the third set at 16-16. Needing the set to force more play, Iowa State rebuked the KU attack and finished with a 9-2 run.

Kansas received a strong performance from Christon, who finished with a career-high and team-high 14 kills on the night. Junior Sara Nielsen also did her best to support the KU offense, finishing with a team-best 28 assists.

KU capitalizes on a long rally

The Jayhawks cut into the Cyclones lead with a block to end a long rally.

S2 | Hill with a 𝒌𝒊𝒍𝒍 to put #KUvball in double figures.

The freshman gets her 7th kill of the first set to give the Jayhawks the 23-22 lead!

Morgan Christon with the KILL

The freshman cuts the Iowa State lead down to just one with her 5th kill of the night.

S1 | #KUvball out to an early lead over ISU. Nielsen with a 𝐤𝐢𝐥𝐥 to give KU a two-point advantage. 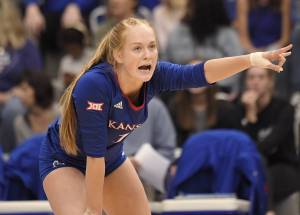 The senior continues to climb up the Kansas record book as she looks to amass 1,100 digs in her career. She currently sits with 1,067 and is ranked 10th in program history. 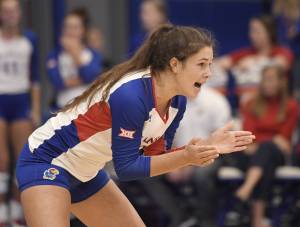