LAWRENCE, Kan. – After a successful freshman campaign, Holly Kersgieter disproved the ‘sophomore slump’ mantra. Kersgieter’s sophomore season was certainly one for the books and below we take you through three of her most memorable games from the 2020-21 season.

In the season opener at home in Allen Fieldhouse, Kersgieter shined with a double-double of 21 points and 11 rebounds in the Jayhawks’ 78-62 win over the Bears. 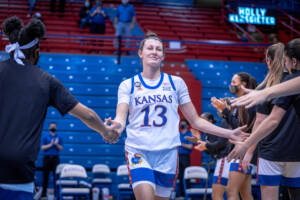 During the first half, Kansas started off blazing with two 11-0 runs and concluded the second period with a lead of 25 points.

In the waning moments of the that very same stanza, an outside pass found its way to Kersgieter on the wing where she drilled a three-pointer to end the first 20-minutes of play.

She led the team in assists at four, points—with nine of the 21 coming from long range and rebounds.

With 50 percent shooting from the floor, Kersgieter ended the contest with a perfect free throw percentage, going 4-for-4 from the charity stripe.

Following the season and home opener, Kersgieter and the Jayhawks improved to 2-0 to start the 2020-21 season after defeating Texas A&M-Corpus Christi 85-43. 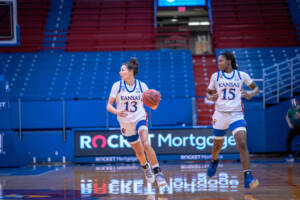 The sophomore sensation used this game to tie her career-high in three-pointers made in a single game, of five.

Through her 20 minutes on the hardwood, Kersgieter made her presence known and shot an impressive 83 percent from distance.

She added a pair of rebounds, several assists and a block to Kansas’ efforts on the day.

This is the second time that Kersgieter has made five three-pointers in a game.

For her career, Kersgieter has 11 games where she has scored at least 20 points. 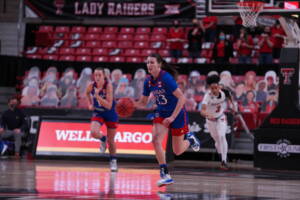 Well, that changed against the Red Raiders.

The double-double, her second of the season, rounded out with a new career-high of 16 rebounds.

She also added three assists and a major block to her game totals.