“Coming from a small town like Robert Lee, everybody participates in every sport or there would not be enough players to play,” Philley said.

However, Philley did not start these sports because they needed student -athletes to participate, but because of his father, Tim. Growing up, Tim Philley was a good athlete playing basketball and football for a 5A high school and he mentored his son as the younger Philley developed and entered into the sports world.

“I think it was important to participate in all sports,” Tim said. “Life is a sport. Sports teach you how to handle life, whether it is a team sport or an individual sport. I have always told Logan, ‘I can teach you how to throw a baseball, football, shoot a free throw, dribble behind your back etc., but I can never teach you (would always point a finger to my heart) this!'”

One spring day of Philley’s freshman year of high school, he saw all of his sister’s patches and letters that she achieved playing basketball at Robert Lee around the house. At that moment, Philley realized the goal for his high school athletic career was to letter in every sport he participated in.

As you can imagine, it is not easy for a high schooler to juggle all of these tasks.  Philley would play golf very little during football, but as the season came to a close, he would pick it back up before basketball. Then basketball season ran throughout the winter and the golf season only lasted two months in the spring.

The multi-sport athlete achieved many athletic honors at Robert Lee, including lettering in track one year, football two years and basketball four years. Philley was named all-district in basketball his sophomore, junior and senior years. His junior and senior seasons, he was named All-West Texas in basketball. Even with all of these achievements, it never stopped Philley from playing the sport he loved the most.

“Golf has always been my passion. It was always my main sport that I focused on,” Philley said. “I just played other sports because I enjoyed them.”

Philley’s passion began when he started riding around with his father in the golf cart at Mountain Creek Golf Course in Robert Lee, around the age of three. When Philley turned five, his father cut down a Ben Hogan three wood and the first time he struck the ball, it flew right down the middle about 75-80 yards. At the age of seven, Philley would play nine holes with his neighbor, Mr. Kennedy, every morning and help Mr. Kennedy find his ball, as Mr. Kennedy was getting old.

His dedication for golf allowed Philley to accomplish many more accolades before graduating from high school. He was a three-time individual state champion in golf, a four-time all-state selection, named the team MVP all four years at Robert Lee after leading the Steers to four district championships, four regional championships and four state championships.

“While other guys were dating, going out, sitting on the couch, Logan would be at the golf course with me hitting balls, putting with the headlights on the green, chipping and playing in rain,” his father recalled. “What more could a young man desire than coming out of a 1A high school and being the first athlete from that school to play for a Division school?”

As a senior at Robert Lee, Philley knew that he could take his golf skills and knowledge to the collegiate level. His only speedbump in his way to a collegiate career was his recognition of achievements from a 1A high school in the state of Texas.

“It is different coming from a small school,” Philley explained. “The competition and recognition is not as high as others. I knew I had a chance to go play college golf, but did not know where. I had a few offers from a few four-year schools, but didn’t want to go to a Division II school. I got advice from multiple people telling me to play two years at a junior college and would have a chance to transfer to a bigger school. I was lucky enough to get a scholarship at Odessa Community College.”

At Odessa Community College (OCC), Philley really toned in his golf game to a higher level.  OCC has a strong history of sending players to Division I collegiate schools to play and is ranked amongst the best of community colleges in golf. While attending OCC for two years, Philley was able to compete in every event besides the National Junior College Championship. Philley finished in the top-20 of most tournaments he competed in at Odessa.

With his multiple achievements throughout high school and while at Odessa, Philley still was in pursuit of finding a Division I college to attend and play for. While competing at the Odessa College Invite, he caught the eye of Kansas head coach Jamie Bermel.

“It was our first year (at KU) and we had guys leaving the program, so I was looking for some experienced players,” Bermel said. “I started checking around the community colleges and found Logan down at Odessa Community College. Logan was from a small town in west Texas and exposure was pretty difficult out there. I think the route he took, going to junior college, really helped his exposure and gave him a couple more years of experience.”

Bermel is a big fan of multi-sport athletes, as they have participated in team sports. The sport of golf is mainly individual; yet, as a team sport in college, such as basketball and football, it teaches the players to rely on their teammates. Bermel believed Philley would fit right in on the Kansas squad. Philley sealed his pursuit of playing for a Division I college program when he decided to play for KU.

While at Kansas, the senior has continued his determination to improve his game. He has competed in 16 events over the past two years as a Jayhawk and has accomplished two top-20 and one top-10 finishes including six rounds posted in the 60’s. Looking back as his collegiate career starts to come to a close, his favorite part about being at KU is the environment.

“It just feels different in Lawrence, Kansas. There is a sense of unity here,” Philley explained. “Being a Jayhawk means everything to everyone around here.”

Philley has embraced the identity of being a Jayhawk during his time on Mt. Oread, whuile Coach Bermel has embraced Philley’s character as he continues to transform the program.

“Logan is one of those kids that pays attention to the little things. He is always on time and does the little things correctly. That is a part of the expectation of him and his family,” Bermel said. “His parents have provided him with an opportunity to play at the highest level and I think he is taking advantage of that. Logan is a quiet leader. He leads by example by what he does each and every day.”

Last summer the table was turned in the Philley household. Tim Philley was so frustrated about his golf game he was almost to the point of giving up the sport. Then his son sent him a picture of professional golfer, Payne Stewart, with the statement, “A bad attitude is worse than a bad swing.”

“I have that picture above my desk at work to remind me every day of not only keeping a good attitude at work and on the golf course, but more importantly, to tell me that my son loves me as much as I love him,” Tim said.

Returning the favor to his father last summer for coaching, supporting and being there for him throughout his life. Senior Logan Philley proved that growing up in a small town as a multi-sport athlete, in a special environment, can overcome the challenges of playing several sports in a 1A high school with minimal exposure to golf for a Division I school, at the University of Kansas.

Fill out my online form. 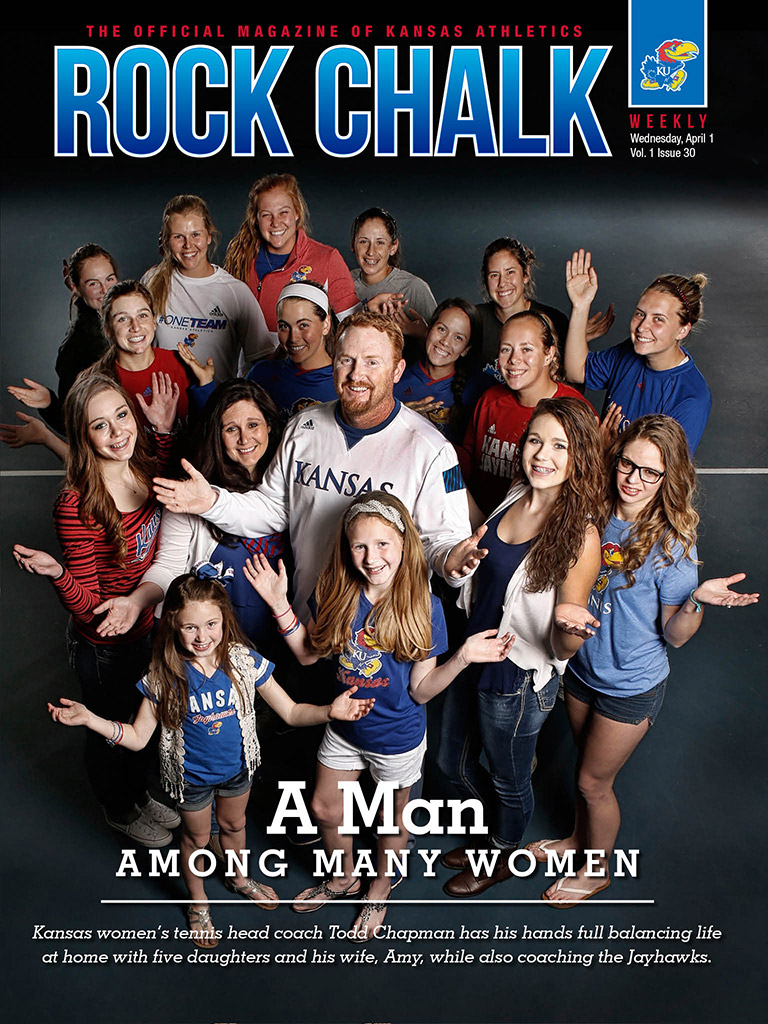 Find more great content like this and other stories from Kansas Athletics inside this week’s edition of Rock Chalk Weekly, available via app on your tablet and smart phone, or in the web content viewer at RockChalkWeekly.com.
Inside this week’s issue: