When lining up wearing No. 5, wide receiver Stephon Robinson Jr., may not be the most noticeable person on the field. Oftentimes after the snap, whether fighting for a first down, or streaking across the field for a touchdown is when he gathers the most attention.

Throughout his football career, Robinson has often been labeled undersized. Standing at 5’10”, 180 lbs., his size might be overlooked, but his play on the field has been nothing short of standout.

Last season alone, Robinson accounted for 19 plays of 20 or more yards, six of which went for touchdowns, the most of any player on the Kansas team. He would finish his junior campaign with 45 catches for 727 yards and eight touchdowns.

“I have been doubted whether it’s my size or my ability on the field, but no matter what obstacle I faced, I kept pushing. No matter what cards I was dealt, I played them. I always try to make the best of any situation.”

Robinson got his start playing flag football at the age of six, before transitioning into padded football. His older brother, who also played for Englewood, his mother and his friends were the reason he picked up the sport he would fall in love with.

“I started by playing nose guard on defense and I was the smallest person on the team,” Robinson said laughing. “But I also played quarterback, so I had a skill position on offense and (on) defense I was one of the smallest players playing one of the biggest positions.”

Robinson cherished his opportunity to be out on the field. Entering his freshman year at Narbonne High School, Robinson measured at about 4’11,” though it wouldn’t stop him from making the junior varsity team.

By his junior season, Robinson was set as a starter at wide receiver for Narbonne, though his season would be cut short with a broken wrist. The Gauchos would go on to win the California State Championship that year with Robinson sidelined.

“Each school will have transfers come in, or underclassmen are expecting playing time, so I had to gain 15 pounds on my own,” Robinson said. “I remember every time a commercial break came on when I was watching cartoons or anything, I would do pushups until the break was over.”

His senior year, Robinson would come back and haul in 65 receptions for over 1,300 yards and 18 touchdowns to cap off his career at Narbonne. He didn’t receive any Division I offers at that time and decided to attend local JUCO El Camino.

“[At the time] I thought I deserved more. Especially (with) the season I had. So, I went in to El Camino with a chip on my shoulder and I demanded more. With more demand came more work that had to be done for me to get where I wanted to be,” Robinson said.

Robinson put in the work as a freshman at El Camino, breaking the school’s single-season receiving yards record (1,128 yards) that was set back in 2005. Robinson helped the Warriors to a 28-21 Beach Bowl victory over Palomar, in which he picked up six catches for 170 yards. Despite the big year, Robinson was once again overlooked. 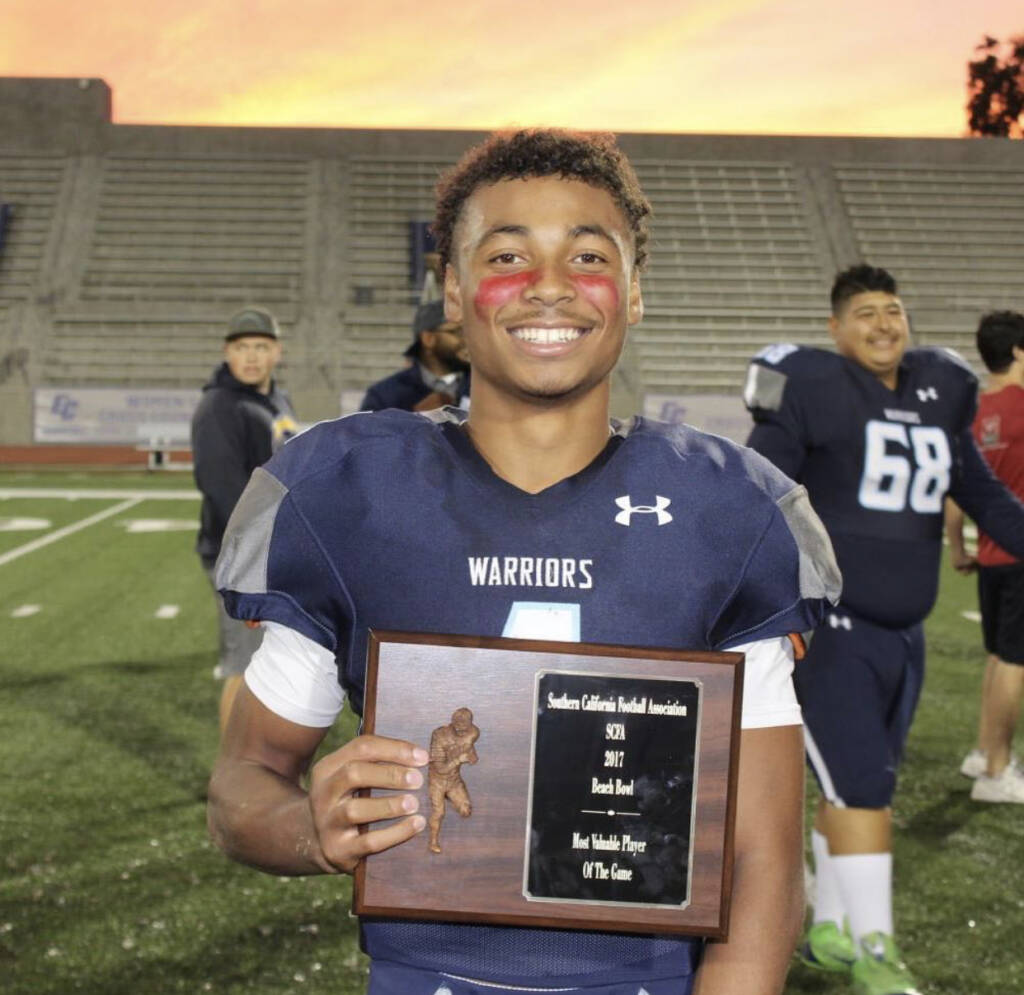 “When I got offered to play at Kansas, it was a crazy moment,” Robinson said. “That came a day or two after I lost an offer to another school. They took my offer from me and I was really hurt. That same day, Kansas came by and a few days later they offered me.”

Robinson would later take an official visit to KU and commit to the Jayhawks soon after. His dream of playing DI football had come true, but he still had to earn his time on the field.

In his first year wearing the Crimson & Blue, Robinson appeared in all 12 games, while starting in 10 games at wideout. He would come in handy on special teams, blocking a punt against Nicholls before scoring his first-career touchdown as a Jayhawk against Texas Tech. He finished the season with 28 receptions for 330 yards and one touchdown.

One year later, Robinson started every game for the Jayhawks and become a go-to target. Robinson would score six touchdowns combined against Oklahoma, Texas and Texas Tech, the most in the FBS during that span, while earning a nod on the Paul Hornung Award Honor Roll for his performance against Texas Tech, where he caught six passes for a career-high 186 yards and two touchdowns. He would finish the season with a career-high 48 receptions for 727 yards and eight touchdowns.

“I can take the good experiences and have more of those each and every game we play,” Robinson said. “(Against) Texas Tech last year, having a big game but also coming out with the win, that’s a memory I will remember for the rest of my life.”

Now a senior, Robinson has gained the attention that he deserves. He was named to the third team Preseason All-Big 12 by Athlon Sports and was a member of the Paul Hornung Award Preseason Watch List – given to the most versatile player in major college football.

Regardless of his size, or where he plays on the field, Robinson has proven to work hard and make an impact. Often overlooked, he believes he personally, as well as this year’s Kansas team, will set the bar high for Jayhawks to come.

“My main thing before I leave here, (is) I want to win. I want to leave the place better than what I came in at,” Robinson said. “I want to leave here doing something no other Kansas team has done. That’s my expectation.”