LAWRENCE, Kan. – On Monday night in Allen Fieldhouse, another banner was hung from the rafters to honor the legacy of Marcus Morris. The number 22 joins the other KU greats who have gone down in history as some of the best, most impactful players to cross through the historic basketball program.

“This is special,” exclaimed Morris during the ceremony at the intermission of KU’s 91-71 win over Iowa State. “It’s an honor to be up there with all those great players. To come back and get my name up there, standing alongside my brother, it’s very special and I’m very grateful for that.”

With 1,371 career points, the 2011 Big 12 Player of the Year trophy, and eventually the 14th overall pick in the 2011 NBA Draft, Morris strung together one of the most impressive three-year stretches by a Jayhawk in the last 30 years. His legacy and impact continue as he expands upon his career in the NBA.

To say that his return to Lawrence and KU was special would be an understatement. Marcus made his return alongside his brother, Markieff Morris and other former teammates from his time at KU. He was greeted by the roar of Jayhawk Nation and a standing ovation of 16,300. His former coach, Bill Self was also happy to see Marcus and Markieff back in Allen Fieldhouse as well.

“I was happy to see them, and obviously they had a lot of teammates that care about them come back too, so it was really special. It’s good for anybody that comes back that had such a career - that impacted us - to have their number hung up there.” 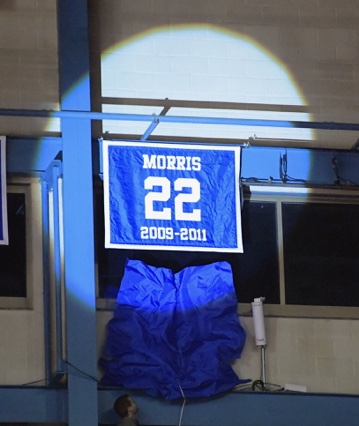 During his speech, Morris took the time to thank God, his mom, his brother, the coaching staff and the KU fans. He credited all of these people for getting him to where he is today and was very appreciative of their efforts. He learned a lot in his time at Kansas and credited much of that to the people here who supported him throughout his journey. 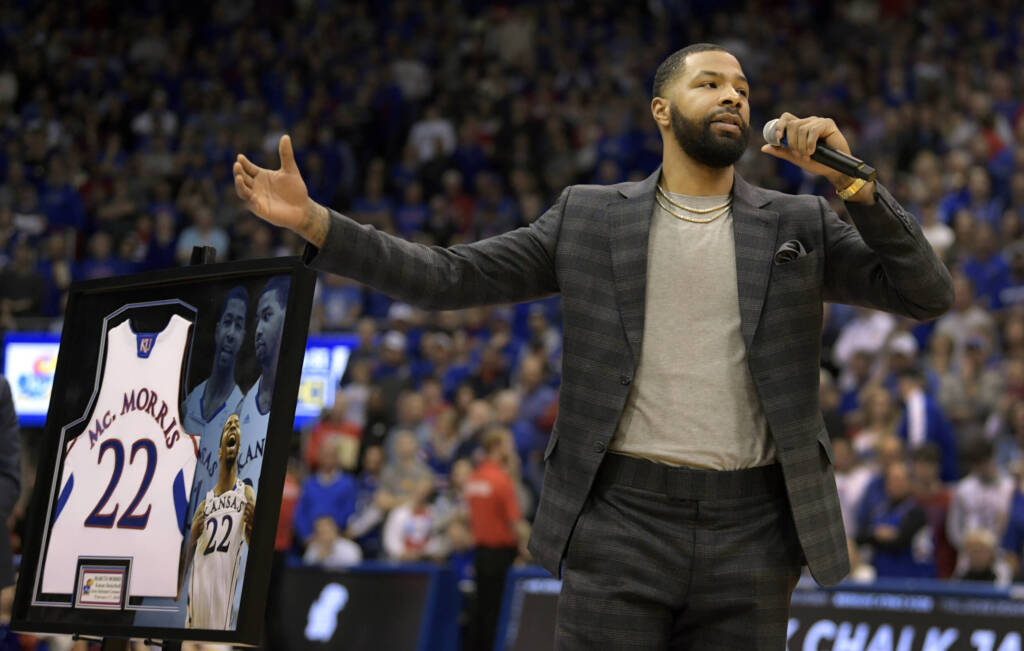 “Coach Self, we’ve never seen eye to eye on anything. But man, what he did for me and my brother was special. He showed us the definition of hard work. He was a father figure to us, he was on us really hard and I really couldn’t understand why. But when I left here and went to the real world and I got to the NBA, everything that he instilled in us, I still use it today.”

It is hard to talk about the legacy of Morris without mentioning his twin brother Markieff. “Two kids from North Philadelphia, we took this journey together, we stood together, we stood tall in every situation.” Marcus said. Making the move to Kansas was difficult, but the two of them made the most of it and built a strong foundation for their basketball careers and beyond as they both are now enjoying strong careers in the NBA.

The moment and the honor meant a lot to Morris and it was obvious in the execution of his speech. Self said in the post-game press conference that when he asked Marcus how he thought it went, Marcus said “Coach, I killed it.” In preparation, Marcus went back and watched the past speeches. Coach joked that it was probably the most he studied in a while. But it shows that not only did he have an impact on the program, but the program had an impact on him, and he was glad to be back and express his gratitude to Kansas and Jayhawk Nation.

“You guys accepted us with open arms, you stayed with us through our tough times. We kept pushing, and without you guys, we wouldn’t have made it through,” Morris concluded. “We are very grateful, Kansas is home for us, we love you guys, and we appreciate everything. Rock Chalk Jayhawk, Go KU!” 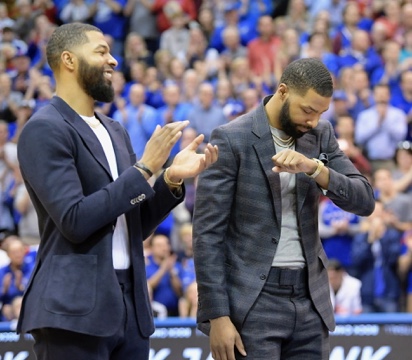