LAWRENCE, Kan. – From Chicago to Iowa City and now in Lawrence, Isaiah Moss celebrated the upcoming conclusion to his college basketball journey and his final game in Allen Fieldhouse with 16,300 of his closest friends, his teammates, coaches, and his family. Moss finished his final game in the Phog with 5 points, including one three-pointer, 5 rebounds, and 3 assists in the Jayhawks’ 75-66 win over TCU. Moss capped off his collegiate basketball career by celebrating with the newest Big 12 Championship trophy for the Hawks, the 15th in the last 16 years for Kansas and the first for Moss.

“I feel great about it. That’s why I came here, to win. It’s my last year and I wanted to go somewhere where I knew I was going to compete hard and win games. It feels good,” said Moss about how he felt about winning the Big 12 Championship in his final year.

The fifth-year senior graduated from the University of Iowa with a 3.6 GPA last summer. Moss came to Kansas already with an impressive resume in his time with the Hawkeyes. He scored in double-figures 43 times and had seven games where he scored 20 points or more. He was also Iowa’s Most Improved Player Award after both the 2018 and 2019 seasons.

Moss scored 906 points in his career at Iowa and tallied 235 points while at Kansas, making a place for himself in the 1,000–career points club. His career-high in points for the Jayhawks came against Monmouth earlier this season, where he scored 21, including going 5-for-6 from the three-point line.

And while his on-court prowess is proven, it’s his veteran leadership and experience that has proven vital to the Jayhawks during the first 30 games of their 2019-20 season – something that Bill Self took note of during his introduction on Senior Night.

"They say you’re only as good as your seniors and fortunately for us, we have two outstanding ones. The first one [Isaiah Moss], has only been here for about seven months, but we would have had no chance of having that right there [Big 12 Championship trophy] if he didn’t come here.” 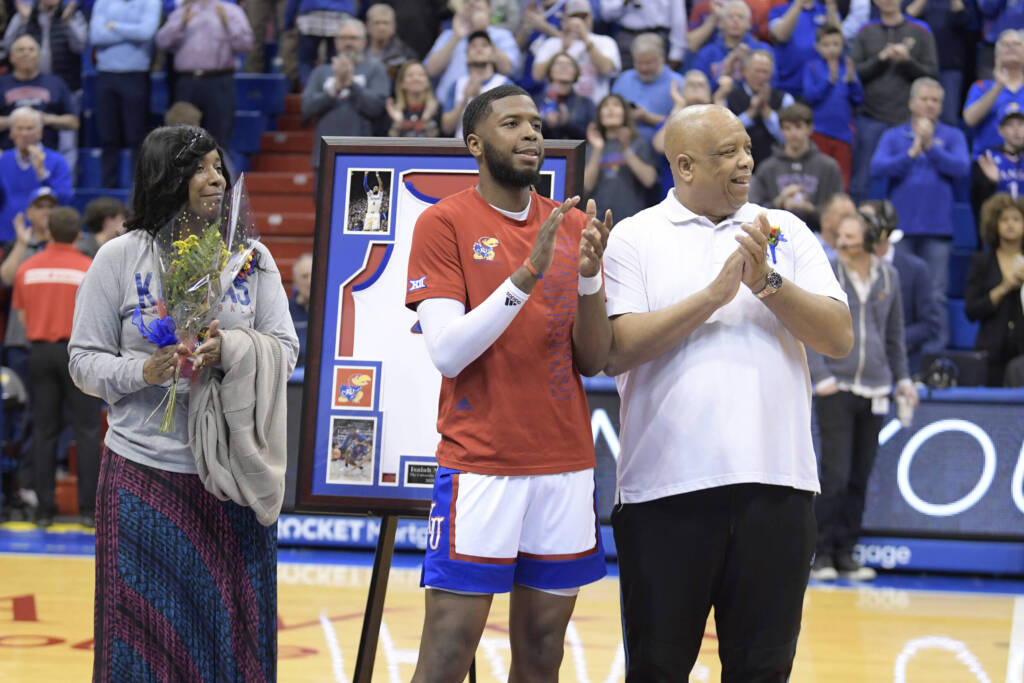 Kansas fans were excited about the new Jayhawk due to his shooting abilities and accuracy from the 3-point line. The sharp-shooter won Big 12 Newcomer of the Week after his outstanding game at Oklahoma, where he scored 20 points including 6 from beyond-the-arc, which tied his career-high.

The tradition of excellence that Kansas basketball has, has been instilled in Moss in his short seven-month stint as a Jayhawk. Kansas basketball holds their players to the highest standard in order to make them the best all-around men that they are capable of being. His coaches and teammates have pushed him, supported him and welcomed him into their family with open arms, while still holding him to that same standard that they hold themselves to. In his senior night speech, Moss stated that Coach Self brought things out of him that he didn’t even know he was capable of.

I want to say a special thank you to Coach Self. He pushed me hard and brought stuff out of me that I didn’t even know I had, and I appreciate that.” 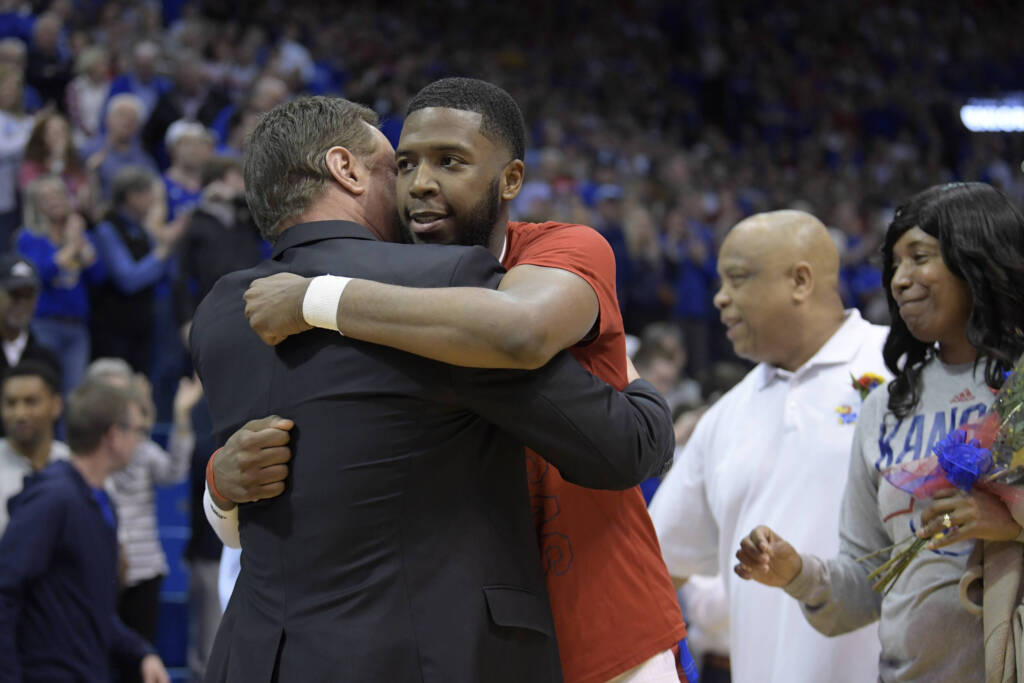 Not only did the team welcome Moss in, but Kansas fans stood behind him all season long. Jayhawk nation showed their love and support for the fifth-year senior in his Allen Fieldhouse curtain call.

“Lastly, I want to thank the fans. I’ve been to a lot of arenas in my college career and there is nothing like this [Allen Fieldhouse] at all. When I say this, I think I can speak for all of my teammates. We’re going to do all that we can to try and bring the National Championship back to you. Rock Chalk.”

On Saturday in Lubbock, the Jayhawks will have the chance to win the Big 12 Championship Title outright with a win against Texas Tech. Udoka Azubuike and Isaiah Moss will suit-up in their final regular-season game as a Kansas Jayhawks, but not their final game in the crimson and blue, as the madness of March is only just beginning. 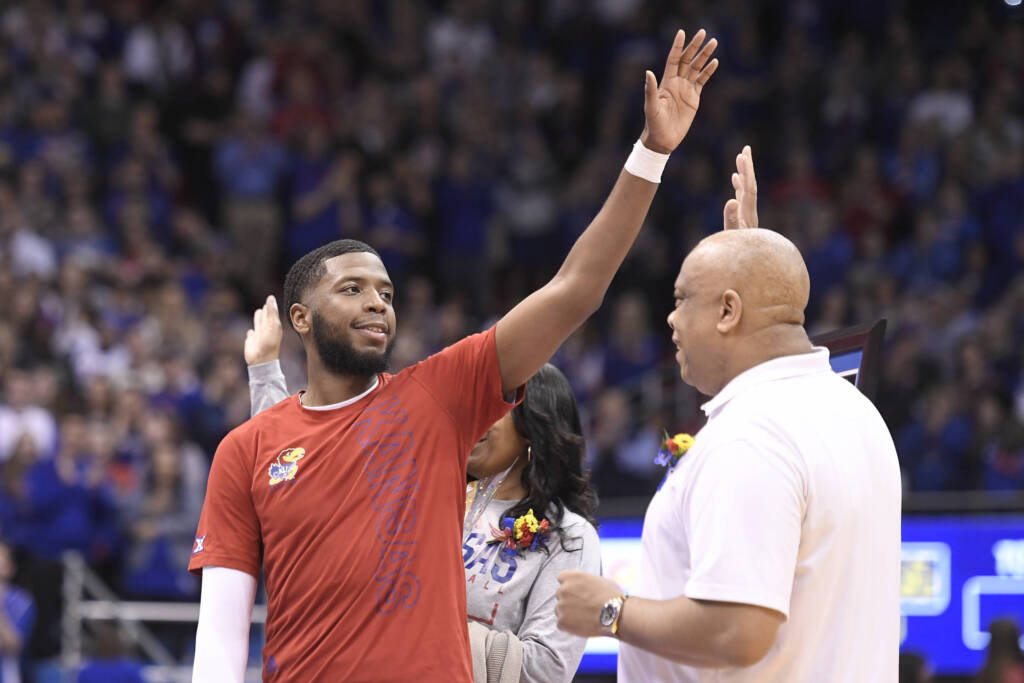