Nikki Wahle Barrett arrived at the University of Kansas in 1999 to play her dream sport at her dream school.

In four seasons, she put together about as good of a resume as there is. She helped guide the Jayhawks to the program’s first NCAA Tournament appearance in 2001. She was co-captain of the team a year later and she earned Academic All-Big 12 honors each of her last three years on campus.

When she graduated and moved on, she figured she knew the exact legacy she left at KU, which was a hard-nosed soccer player, who always brought leadership, aggressiveness and pizzazz to her game each and every time she took the pitch.

However, as she found out very recently, her legacy hardly stops there.

When Barrett received a phone call earlier this year from Paul Pierce, KU’s Associate Athletic Director for Inclusive Excellence, she learned her legacy extended even further than she thought.

Pierce called to tell her that as the first African-American to ever compete in soccer at Kansas, she was being named a Marian E. Washington Trailblazer. You can imagine her shock since she wasn’t aware that was a barrier she broke down.

I really had no idea,” Barrett said. “It was actually shocking to me. Soccer has been a traditionally white sport. But the tide is changing, and I love to see it. Now that I do know, I think it’s so cool, and I’ve told my kids and my fiancée, and I think it’s a huge deal now.”

The fact that she didn’t know – in her eyes – is a credit to Kansas, Head Coach Mark Francis and her teammates at the time.

“At KU, my experience as a black soccer player in a white sport; it never felt different for me,” Barrett said. “I wasn’t treated any differently. That’s to the credit of KU as a school and athletic department, and the coaching staff while I was there. KU is a very open-minded school and is accepting of all colors and all people. It was the same with the coaching staff; I always felt seen and heard. I didn’t feel like what I was doing was any sort of milestone.”

The truth is, Barrett always felt a little different than the rest of her teammates and competitors when she was on the pitch, but not because of her race. Instead, as a 6-foot defender, most people thought she was a volleyball or basketball player.

But from a very young age, Barrett felt most comfortable playing soccer because it was the sport that most closely replicated her personality.

“I was always taller and everyone assumed that I was a basketball or volleyball player,” Barrett said. “It was very stereotypical, so I felt different, but not because of my race. I was more aggressive than the other players. I had a special bond with the referees, I would say. I stood out that way. I’m very loud and outspoken, and I use my voice in positive ways to stick up for other people.”

In fact, rather than feel different because of her race, Barrett always felt accepted and comfortable in soccer because of the comradery and togetherness that comes with the sport.

“The soccer community is so tight,” Barrett said. “Not just the team you are on, but the whole world of soccer. We understand how hard we work. It can be all year long, and it can be a grueling, grueling sport. If you grow up a soccer kid, you know how special it is to play. Soccer is an amazing sport with a tight knit community.”

For Barrett, she always knew exactly where she wanted to play college soccer. A native of Overland Park, Kansas, there really was never another option for Barrett.

A Jayhawk through and through, she remembers crying when the Kansas Basketball team fell in the NCAA Tournament and proudly wearing the Crimson and Blue before she was even a Jayhawk.

“I wasn’t going anywhere else,” Barrett said. “I just wasn’t. I grew up in a single-parent home and as an only child. My mom and grandparents followed me all over the country for soccer. It’s what we did, and I just wasn’t going to go anywhere else to keep playing. I have always been a diehard KU fan, and I was coming there with or without soccer. To have them be able to come to all of my home games and share in my accomplishments was absolutely a dream.”

Barrett is now an elementary school counselor and still uses the lessons she learned playing soccer in her career. She uses the same type of fearlessness she used on the pitch to break barriers with her students and prepare them to make their own impact on society.

And as she forges forward, Barrett now has the knowledge she did something no soccer player in the history of the University of Kansas had done before.

“I really don’t feel like I paved the way for anyone, but knowing what I know now, I’m just honored and speechless that I was the first,” Barrett said. “To be recognized as a Marian E. Washington Trailblazer is bigger than the sport, bigger than a record, bigger than an achievement, it’s a huge honor. That’s something that can’t be beaten.” 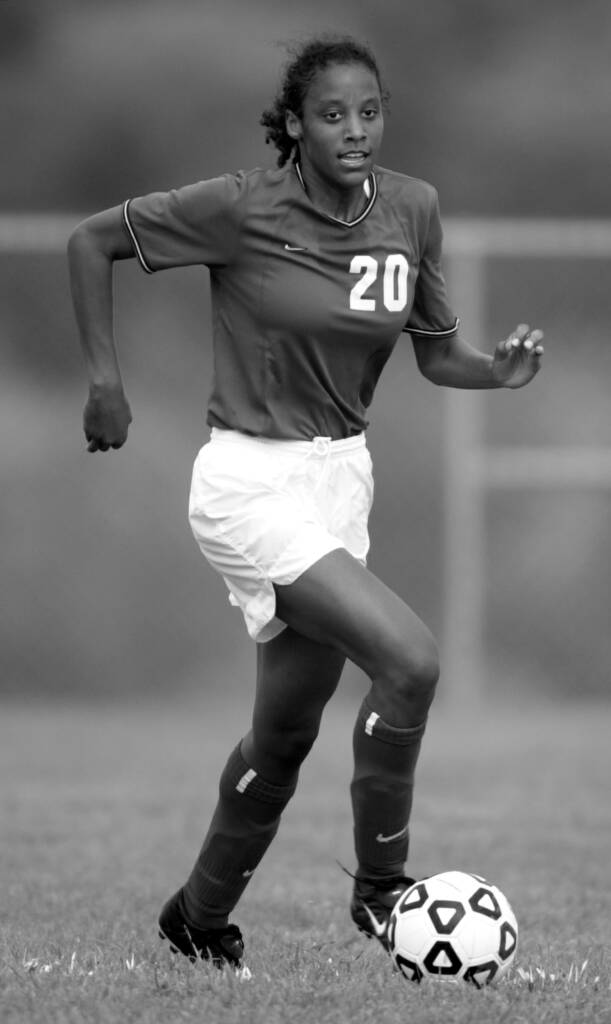