Twenty-four players – just 11 since the turn of the 1960s – have suited up in the Crimson and Blue and left Lawrence with 31 first-team consensus All-American honors.

Names such as Chamberlain, Manning, LaFrentz, Pierce, Gooden, Collison – the best of the best.

Agbaji, for his efforts, became the sixth player during the Bill Self era to be named a consensus first-team All-American, joining Wayne Simien, Sherron Collins, Thomas Robinson, Frank Mason III and Devonte’ Graham. Of those six, five were seniors.

That – Agbaji knows – is no coincidence.

“When I was going through the pre-draft process last year, and was talking to Coach Self prior to my decision, we talked about different guys that have gone too early, and guys that have benefited from staying,” Agbaji said. “One thing Coach Self stressed to me is that it is not a negative to stay another year. When I really started looking at it, every guy that played four years here, either they benefited or the team benefited.” 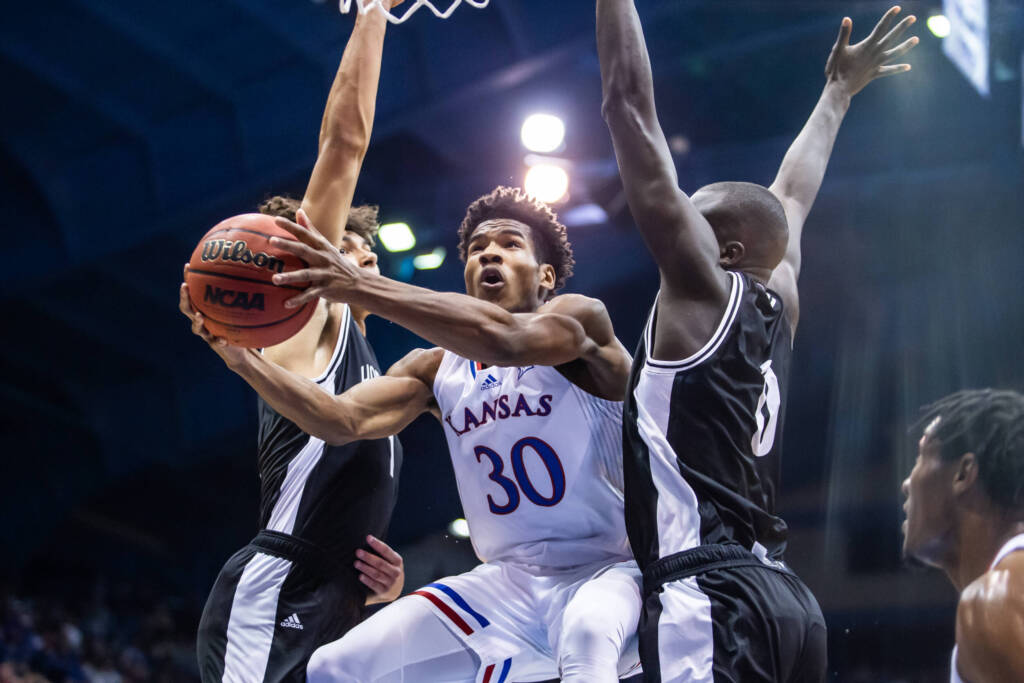 In each of the five cases, the player went from an all-conference level as a junior to one of the very best players in the country as a senior.

“It meant the world to stay my senior year, not only for me, but for my family,” Graham said. “The fans were unbelievable, to get to graduate…I loved every second I was there. With Ochai, every year he made the necessary steps to become who he is today, and I love to see it.

“He has been patiently waiting his turn to take over the team, and that’s exactly what he did; just like me.”

Similar to the seniors before him, Agbaji has raised his game and then some this season. The Kansas City, Missouri native has been named a finalist for the Naismith Trophy, along with three others and his list of accolades seems to be growing by the day.

Those accolades have already ensured that at some point in the future, Agbaji’s name will forever hang in the rafters of Allen Fieldhouse, alongside other greats who have come before him.

All made possible of course, by his decision to return for his senior year and put the NCAA Draft on hold for another year.

“This is what I’ve always dreamed of,” Agbaji said. “This is what everyone dreams of. I’m blessed to have the opportunity, and earn some of these accolades…It’s almost nearing a year that I made the decision to test out the draft process. I had an alright year, and I was torn, because I wanted to leave Kansas on a better note, but I also wanted to do what was best for me.

“Ultimately, I decided to go give it my best for one more year here and see what I can learn, and I’m really glad I did.”

The accolades and attention have been nice, but the real goal for Agbaji when deciding to return was to get the bad taste out of his mouth when it comes to the NCAA Tournament and lead the Jayhawks on a deep run.

So with the team’s Sweet 16 matchup with Providence set for Friday night at the United Center in Chicago, Agbaji has been motivated to make a deep run, especially for the 2020 team that still has unfinished business.

“Devon Dotson texted me after we won on Saturday, and he knows that I know this is for two years ago,” Agbaji said. “We want to do this for him and that team.”

Dotson, who came to KU the same year as Agbaji in 2018, expects to be in attendance this weekend to watch Agbaji and his teammates first-hand as they try to make up for 2020.

“Och has made a big jump,” Dotson said. “The main thing is just mentally. He’s grown by being more comfortable and gaining confidence in every area of the game. Some of the things he’s doing now looks like a whole different Och from freshman year. He’s embraced being the No. 1 option, and he’s taking advantage of it.”

Dotson continued: “My guys from the class of 2018, those were my guys coming into college. We started that chapter of our lives together, so it would be special to see them get the unfinished business done.”

Someone else on that 2020 team – Udoka Azubuike – also benefited greatly from returning for his senior season. He was a second-team consensus All-American and the Big 12 Player of the Year. He too has enjoyed watching Agbaji’s development, but isn’t surprised to see it.

“Ochai has turned into, not only the best player in the Big 12, but one of the best players in the country,” Azubuike said. “He has gotten better every year at KU, and that’s what Coach Self does. If you stay for four years, you’re going to get better.”

And that’s exactly what Agbaji has done.