LAWRENCE, Kan. – Kansas softball comes into the 2020 season with six pitchers and three catchers on their roster. Two newcomers headline the team’s staff as senior transfer Hailey Reed and freshman Tatum Goff will look to lead the Jayhawk’s arms in the spring.

"The thing that I am most excited about with our pitching is the staff’s versatility. I think adding a freshman left-handed pitcher in Tatum Goff to the mix with our returners really brings a different dynamic to us. We have a lot of experience that is going to be returning, especially when you add in what Hailey Reed is going to bring in after spending her first three seasons at Pacific."

The senior primarily appeared in relief roles for the Jayhawks during the 2019 season and will continue to work out of the bullpen in 2020. She was named to the 2019 Big 12 All-Academic First Team. 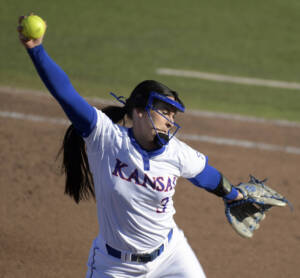 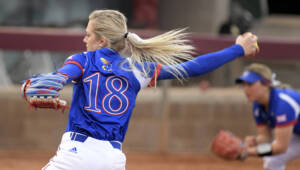 Pruett enters her redshirt junior season with the Jayhawks after appearing in 15 games in 2019. Her four starts last season were the third most for KU amongst pitchers.

Todd appeared in 20 games for the Jayhawks in 2019. She finished with the third most strikeouts on the team with 17 and tied for the team-high in saves with two. The junior had a 14 consecutive scoreless inning streak from March 16 to April 3. 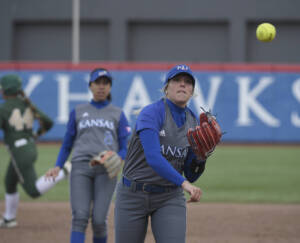 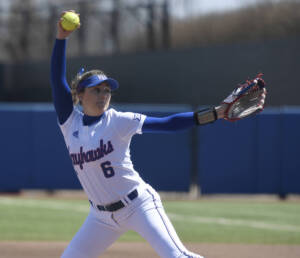 In her freshman season, Mills appeared in 25 games and had the second-most starts on the team in the circle with 14. She led the team in both strikeouts (79) and opponent batting average (.215). Mills also finished tied for the team lead in wins with six. This included a no-hitter performance against Omaha on March 18 where she finished the game with 11 strikeouts.

Newcomers in the Circle

Reed joins the Jayhawks roster for her senior season after spending her first three years at the University of the Pacific. While there, Reed served as both a starting pitcher and outfielder for the Tigers. She started all 48 games her junior season and led the team in three hitting categories: total hits (40), batting average (.296) and at-bats (135). Reed also finished with a team-high 113 strikeouts from in the circle, which ranked her fourth overall in the West Coast Conference. In 2020, Reed will be both an outfielder and starting pitcher for KU.

Goff enters her freshman season with the Jayhawks looking to continue upon her success at the high school level. She finished her high school career with a 0.56 ERA and was selected as the 2019 District MVP and the 2017 Pitcher of the Year. Goff will be serving as one of the main starters for McFalls’ staff in 2020.

"Our catching staff is going to provide us a lot with a lot of leadership this season. All three of them have some different strengths to offer. Shelby Gayre will be coming back after suffering a season-ending injury last season. We will be relying on Shelby Hughston and her senior leadership for this group and then Jordan Richards comes in as a freshman with a really strong arm from behind the plate."

Hughston appeared in 48 games in 2019 and started 47 of them (30 at catcher and 17 at shortstop).  She finished her junior season leading the Jayhawks in on-base percentage at .395 and walks with 22. In 2020, Hughston will serve as both a catching option and infield option for Kansas. 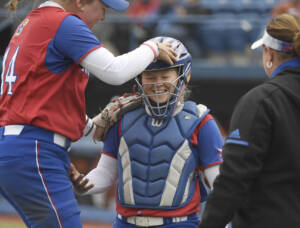 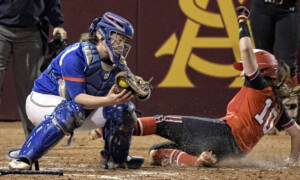 Gayre started 16 games at catcher for the Jayhawks in 2019 before sustaining a season-ending injury. Prior to the injury, Gayre was the team leader in batting average (.383), RBI (11), total bases (27) and home runs (2). She was also selected to the 2019 Big 12 All-Academic First Team. Now fully healthy, Gayre will serve in an everyday role for Kansas moving forward.

Newcomers Behind the Plate

Richards comes into her freshman season after being named a two-time First Team All-State player during her high school career at Olathe High School. She was also a member of the 2017 Kansas 6A state championship team as their catcher.