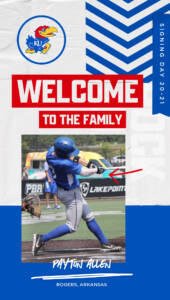 "Payton has good actions at shortstop with the arm strength to finish the play. He plays the game with energy and is a leader on the field at the shortstop position. He has a good approach at the plate and uses the whole field. Payton has played at really high level at the biggest events nationally the past couple of summers for the Royals Scout Team." 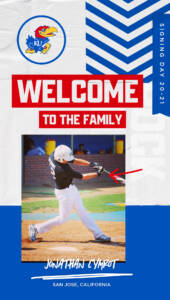 "Jonathan is a 2 way player who was highly recruited after he was named the high school sophomore player of the year in California. As a hitter he has a good swing with rhythm and consistently hits the ball hard, he profiles as a corner INF or OF in college. As a pitcher he has an advanced feel to spin the ball and mix 3 pitches. Jonathan is another player from the South Bay who chose to be Jayhawk, like former Jayhawks Matt McLaughlin, Brendt Citta and Michael Tinsley." 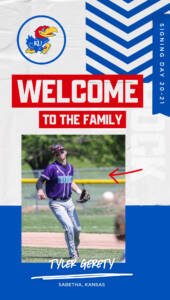 "Tyler is a good athlete who is versatile in the field. He has a really good swing with an advanced ability to square the ball up at the plate. When Tyler has played in a bigger events with The Barn in the summer, he has been the best hitter on the field when the weekend is over. Tyler has a toughness he brings to the field that will be a great addition to our program, and we are excited to add another player from Western Kansas." 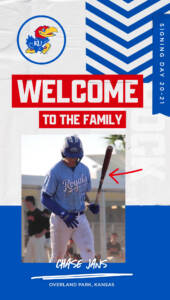 "Chase is one of the fastest players in the country in the 2021 class. He also possesses power from the right side of the plate to go with his elite speed and athleticism in center field. He is one of the top players in the KC Metro and our staff is thrilled he wanted to stay close to home and be a Jayhawk."