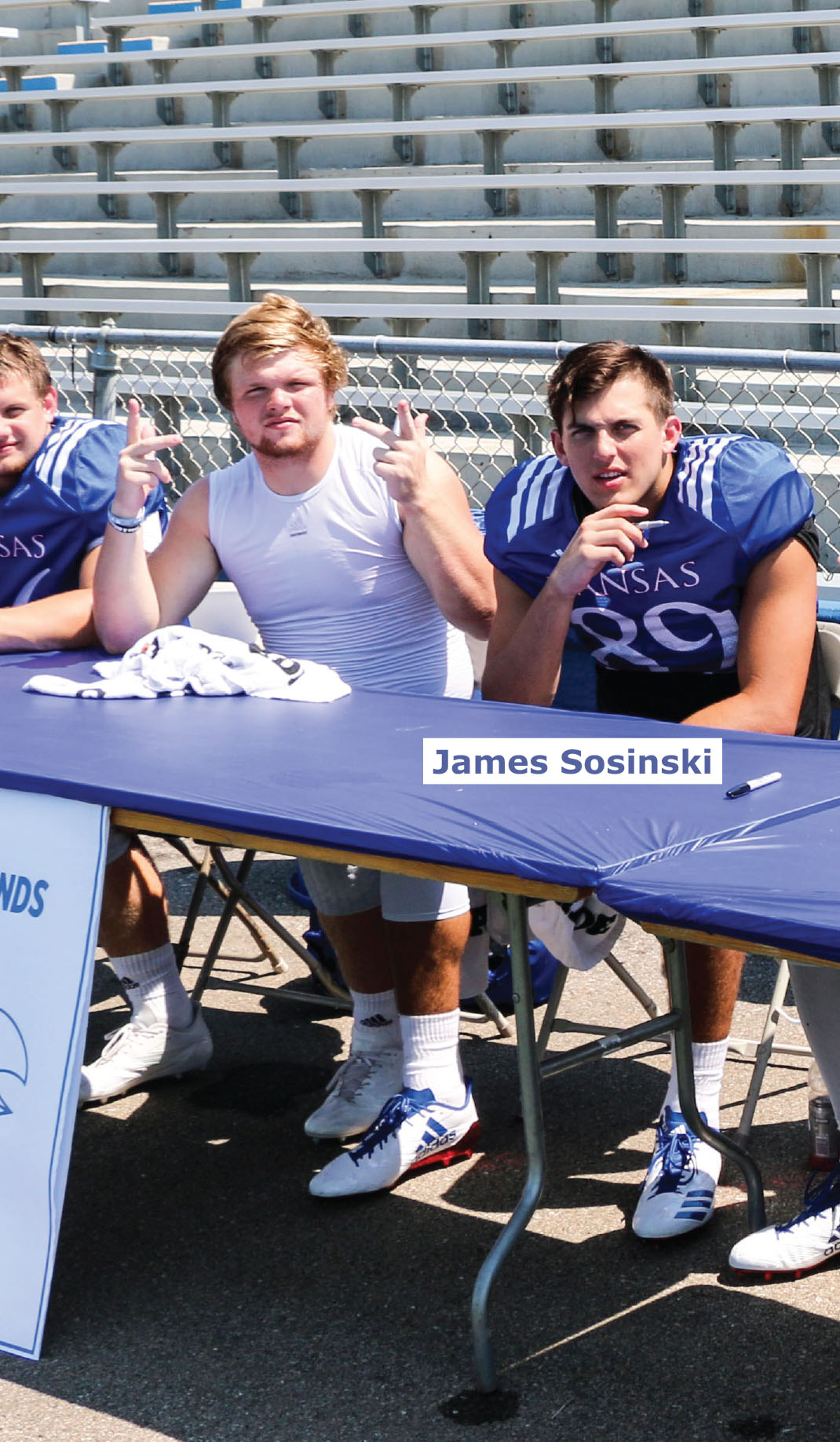 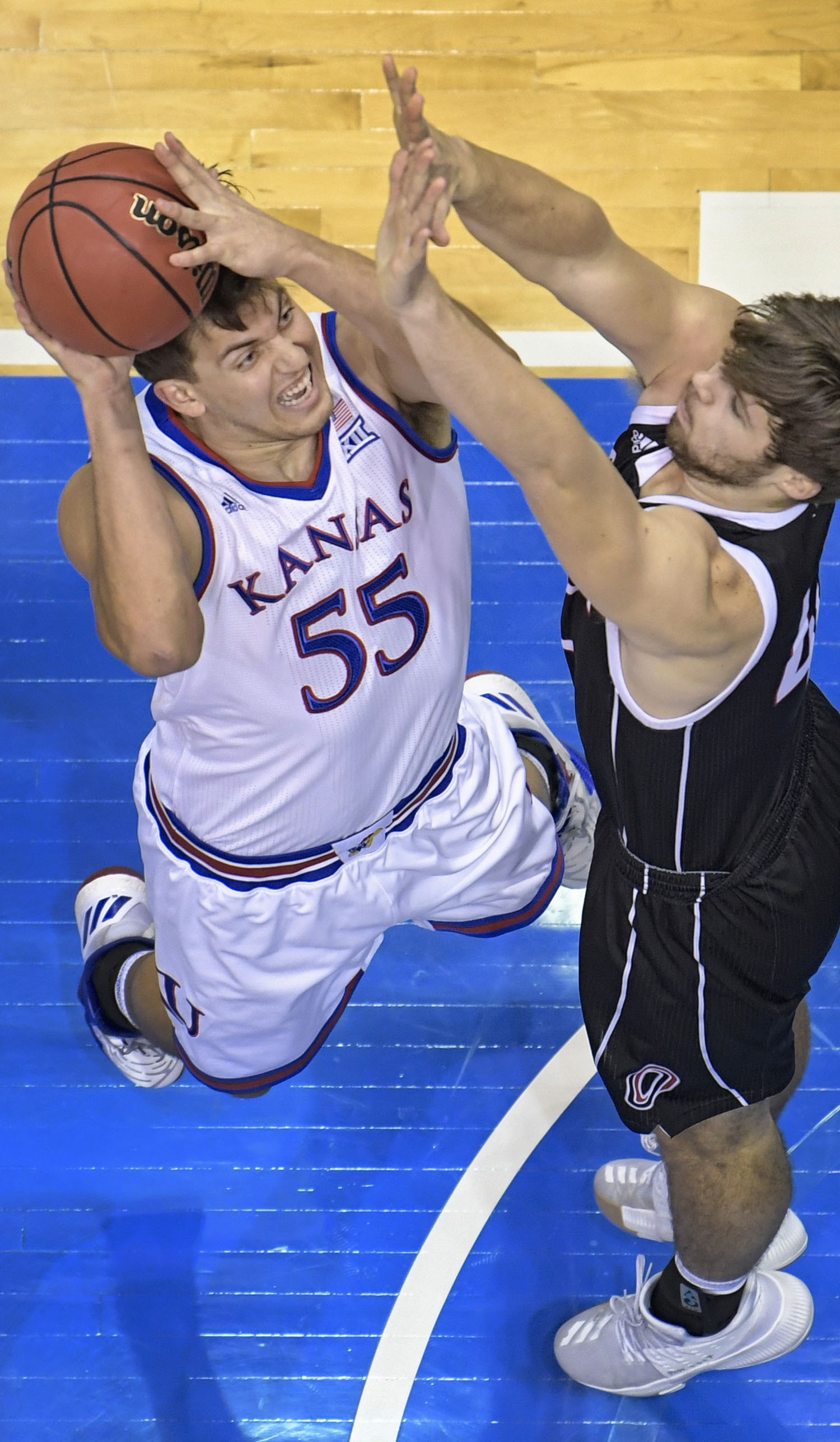 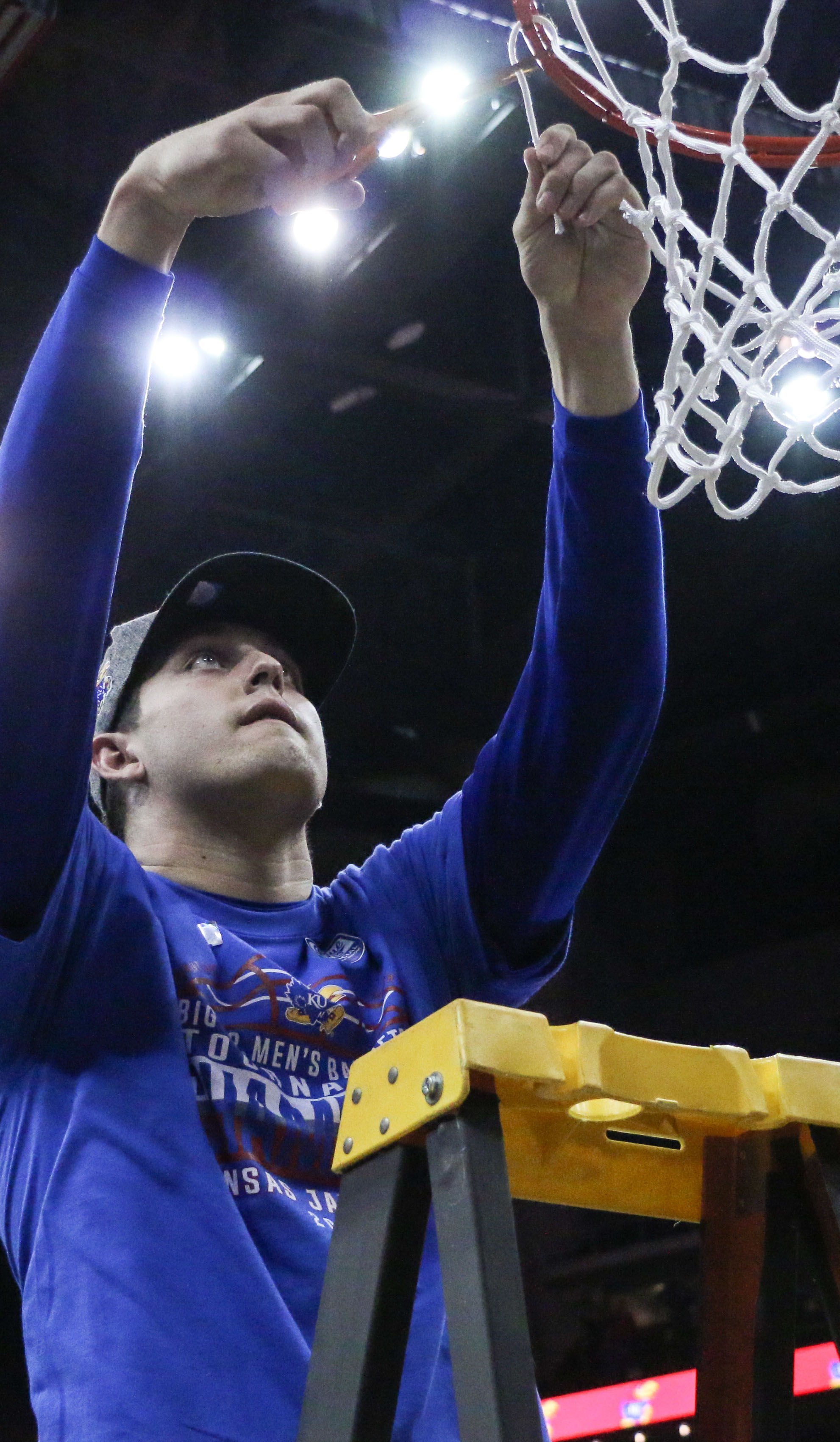 Many athletes spend their childhoods dreaming of playing a sport at the Division I level, but few have the opportunity to do so. Even fewer get the chance to play two sports collegiately. Redshirt sophomore James Sosinski is one of them. He doubles as a tight end on the football field and a forward on the basketball court.

Sosinski attended Hamilton High School in Chandler, Arizona. He was both a basketball star and an all-state quarterback, who led his team to the football state championship his senior year. Sosinski signed with the University of Massachusetts to play football, but after suffering an injury, he found himself moving back to Arizona to play basketball at South Mountain Community College. Sosinski then came to the University of Kansas to return to football. A week after the 2017 season ended, he joined the men’s basketball team to help with frontcourt depth.

Q: How long have you played football and basketball?
A: I’ve been playing basketball since third grade and football since fifth grade. So, it’s been awhile.

Q: Did you play any other sports growing up?
A: I played a lot of baseball growing up. Those were my three sports: football, baseball and basketball.

Q: Did you play all three sports throughout high school?
A: I stopped playing baseball my sophomore year of high school, but I played the other two.

Q: You originally went to UMass to play quarterback. What made you decide to originally pursue football in college over basketball?
A: I really loved playing quarterback. It was my favorite position growing up. I had a really good relationship with the head coach there [UMass]. He was an ex-NFL quarterback coach, so I thought it was a really cool thing to go try to do. But I just didn’t really like the school. It wasn’t because of the football program, but I kind of wanted something different. Plus, I broke my foot and I just felt like it was time for me to get a new start.

Q: While at UMass, did you join the basketball team?
A: No, like week eight of football the coach told me they wanted me to come play basketball. I said I would think about it, then after the season I wanted to go home for winter break, so I just decided not to do it. When I got back they asked me again, but I thought it was important for me to just get stronger for football since that was my main focus then.

Q: After your time at UMass, how did you decide to switch sports and play basketball for South Mountain Community College?
A: When I went back home [Arizona] I was still in a boot, so I couldn’t play football. Instead of going to a community college to play football I chose to go play basketball because I just wanted to get back in shape.

Q: How did you choose to leave your home state again and come play football for Kansas?
A: After the basketball season [at South Mountain], I had more offers to play basketball, but I missed football and I wanted to go back to it. Originally, I came back from UMass to play football. Basketball was more just to get back in shape and get healthy again. Since I didn’t play quarterback [at UMass] I knew it would be way harder to get football offers with no film, so I switched my whole focus to playing tight end. Coming out of high school, I had offers to play tight end and I didn’t take them. So, I just thought I could go back to it. Arizona State had a satellite camp and there were multiple schools there. ASU and Kansas showed interest in me. Then when I came up here [Kansas] on my visit, I committed.

Q: What drew you to the Jayhawks?
A: Right when I got here there was just something about the place I really liked. The coaches I met when I came up here were great. I just felt like it would be cool to come to Kansas. I had never really been to Kansas before this, but for some reason once I got the offer I thought it would be a good spot for me.

Q: Most people dream of being a Division I athlete for one sport. Did you ever imagine you’d have the opportunity to be a two-sport athlete at a Division I university?
A: No, I definitely didn’t. I never thought that I would be playing both football and basketball at Kansas.

Q: For those who don’t know, explain how joining the basketball team came about this season.
A: On Tuesday of the last week of football, Coach [David] Beaty pulled me aside and said he had received a call from one of the basketball coaches. He said they [basketball staff] heard about me and were needing a little bit of help. He asked if I wanted to go try it and I said I would think about it. Then on the following Sunday, Coach [Norm] Roberts called me and let me know what was going on. Coach [Bill] Self called, too, and asked me to come to his office. Then I just took it a day at a time until they told me I was on the team.

Q: Did you go through a tryout process?
A: It wasn’t really a tryout, I was just practicing with the team. I mean I guess it was kind of like a tryout, but they were just seeing how I could play and seeing if I could help them out.

Q: Has it been challenging to transition from the style of football to basketball?
A: It’s been long just going from seasons back-to-back. I’ve been “in season” for a long time now, but besides that it’s been great. They take great care of us, both football and basketball, so that’s made it a lot smoother. The biggest difference is the type of running. In football it’s more like stop and start and in basketball it’s continuous.

Q: How do you balance playing both a fall and winter sport with your academic schedule?
A: Now I have two academic counselors and they’ve been great. They make sure I’m staying on top of things and I go to tutoring. Whenever I’m on the road and I need help, there are always people there to help me. It’s definitely been challenging because I’ve been in season with school for a long time, but the help they’ve given me has made it easier.

Q: What has been your favorite part about playing two sports at KU?
A: Even though it’s hard being in season back-to-back, that’s also the most fun time of the year. The best thing about playing both is being able to play a bunch of games.

Q: Has it been difficult to adjust to being on the basketball team since they were all together in the summer and you didn’t join until later?
A: No, they’ve been great ever since I got here. I think Doke [Udoka Azubuike] likes it because I think he gets good work going against strong guys. Everyone sees his size and they want to put someone strong on him, so I think it’s helped him out a little bit going up against me. As a social thing, it’s also been great. Those guys are family for life now.

Q: There have been a few basketball games where you got to play. What was that experience like?
A: Playing in Allen Fieldhouse was definitely cool. Not many people can say that they’ve played for Kansas in the Fieldhouse. I like practice just because I feel like I’m helping the team out way more than the games and that’s really why I’m here. But playing was just a real bonus.

Q: Describe what it felt like to be part of the team that made history by winning a 14th-straight Big 12 Championship title.
A: That was the coolest thing I’ve ever been a part of. I mean, it’s going to be hard to win something bigger just because that broke a record that probably many people thought would never get broken. It was special because we worked so hard all year. Everyone on the team worked hard. To finally see that all the hard work paid off was really special.

Q: Some of the other players have talked about the pressure of not being the team to break the streak. Did you feel any of that?
A: I felt the pressure, but since I don’t really play it was more like, “Dang, I need to get these guys ready.” That just had me always ready to go in practice because you know, they’re going through a season and playing many minutes and some days they may not be feeling it. So, I just always try to be there to keep them up.

Q: Do you plan to continue playing both sports next year?
A: I don’t know about that. I know I’m planning on playing football next year, but that’s [playing basketball] above my paygrade.