Over the past few years, members of the University of Kansas women’s soccer team have spent their academic breaks participating in medical brigades and service trips across the world.

Four members of the Kansas women’s soccer team, three seniors and one sophomore, highlighted below have each travelled to different corners of the world, utilized the opportunities the University provides, created their own experiences and shared their unique and compelling stories.

Senior Ashley Pankey travelled to Panama with the Jayhawk Health Initiative, a health club at KU that aims to provide pre-health students with an opportunity to enhance their knowledge by engaging in experiential learning and philanthropic experiences.

“For me, I definitely want to have a career in healthcare,” said Pankey. “I thought a medical brigade would be a perfect experience for me to understand what it’s like to work in the medical field.”

Pankey and her colleagues set up their clinic from nine in the morning until four or five at night. The students were able to triage the patients, take their blood pressure and temperature, to asses the priority of the patients’ treatments.

Not only did the students help physically, they helped to promote healthcare literacy in the community. 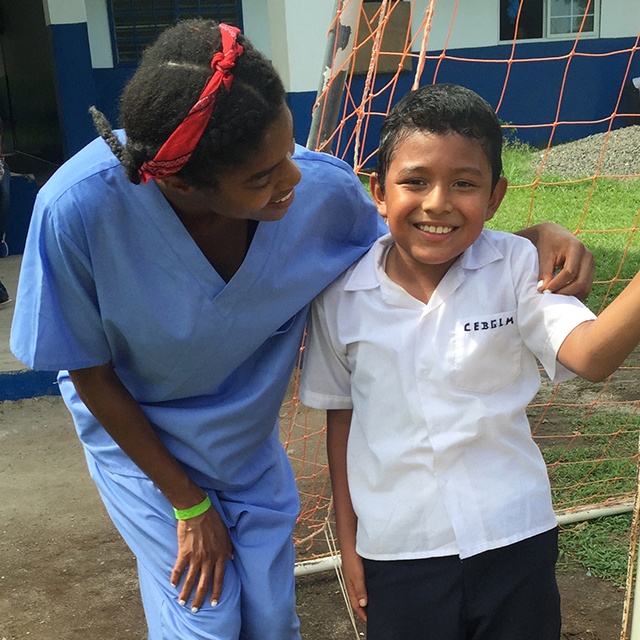 “Being from here [the United States], everyone knows how to brush their teeth,” said Pankey. “We had to teach them and hand out toothpaste.”

Even when they weren’t doing brigades the group still found a way to contribute to the community. From constructing showers in a rural community to gardening in another, no one was left out.

In some of her spare time, Pankey was able to play soccer with some of the locals.

“That was probably one of the the best parts of the trip,” said Pankey. “Even though I couldn’t communicate as well in Spanish, I could always communicate through soccer.”

After graduation, Pankey plans to go to medical school and continue to work with Global Brigades and Doctors Without Borders.

“The whole trip was eye opening. I look forward to going on another mission trip soon,” Pankey concluded.

Sophomore Grace Hagan and her brother were the only KU students to travel to Riobamba, Ecuador with the national organization MEDLIFE, which stands for medical education and development for low income families everywhere.

“I’m really interested in the medical field as well as bettering my Spanish,” said Hagan, who is majoring in biology with a Spanish minor.

Hagan and her group had two tour days and four days of mobile clinics. In one of the villages where they set up, the hospital had two separate buildings, one for Western medicine and the other for Eastern medicine. The clinics consisted of three different specialties: general medicine, dental and gynecology. They also had an educational section where they would teach the locals about simple subjects like blood pressure and brushing their teeth.

“There was one woman who came to the clinic and her blood pressure was so high we had to call her family members to come drive her to a place where she could be picked up by an ambulance and be driven to a hospital,” said Hagan. “It’s crazy how far they have to go and the things they have to do or pay for to get basic level healthcare that we get every day.” 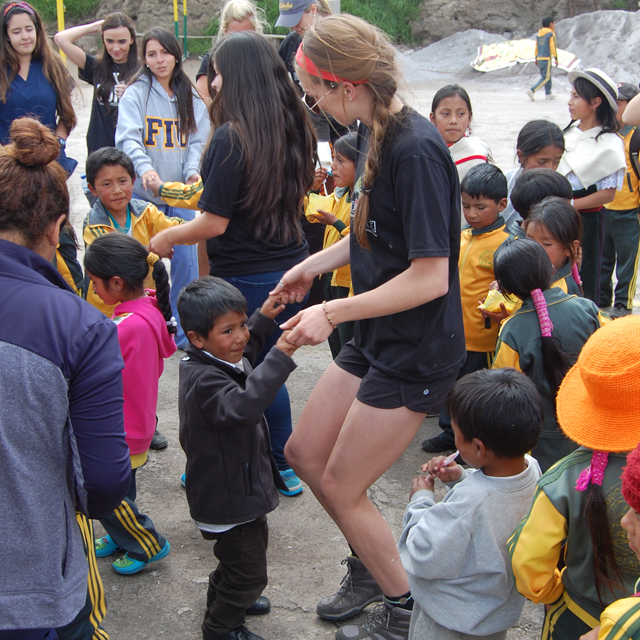 Hagan and her colleagues did more for the community than just putting on clinics. The group helped complete a bathroom at one of the schools where they were stationed. They dug a hole for the septic tank, painted and assisted with the plumbing.

The students had the opportunity to visit a nine-year-old boy who helped inspire MEDLIFE. He has already had three surgeries for a cleft palate. The organization has not only aided him through his surgeries, but he now has a new home thanks to MEDLIFE.

“We got to see his old home,” said Hagan. “It was just a shack and in shambles. His new one had tile flooring and enclosed spaces so it wasn’t as easy for the natural world to affect his house like it could the old one.”

At home, Hagan shadows her mom, a physician, and sees firsthand how important it can be to be bilingual in the medical field.

“I think that’s why I’m dong the minor in Spanish,” said Hagan. “The amount of Spanish speaking patients she had was way more than I thought it would be. Her knowing basic sentences made such a difference and I think even more than that would be extremely helpful.”

Senior Jackie Georgoulis and her sister went to Pechanga, Brazil in 2014, after her freshman year. She travelled with Athletes in Action, an organization that aims to help sports-minded people think and live biblically in the intersection of sport and Christianity.

“I thought that was really cool,” said Georgoulis. “Obviously I really love playing soccer and then I can add Jesus into the mix and that was even better.”

During the day, the athletes would visit three schools and conduct a gym class with the students. Each class consisted of stations, one being soccer and the next, a station where the athletes would share their stories of they came to be followers of Christ. 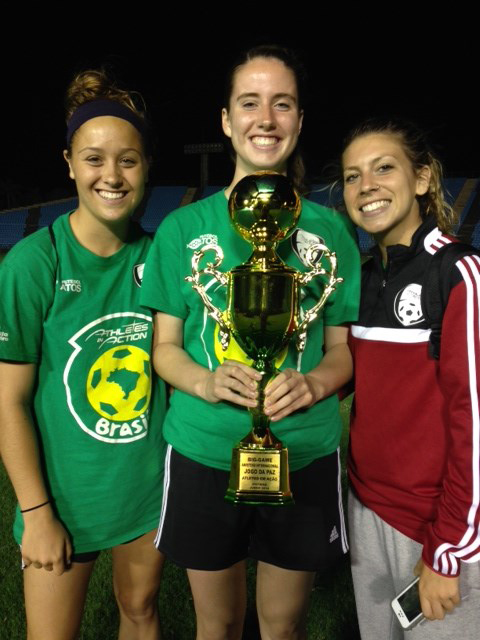 “The children were so loving and listened to everything we said,” shared Georgoulis. “They wanted to know more about God and play soccer.”

Outside of her missionary work, Georgoulis was able to enjoy the events happening in Brazil at the time – the World Cup. She and members of her group were able to attend the Argentina vs. Belgium game, Belgium winning 2-1.
“It’s like watching football here,” said Georgoulis. “Everyone’s nuts. They were all running up to us saying, ‘You guys are from the USA!’ and would give us flags.”

After completing her undergraduate degree, Georgoulis plans to get her master’s at KU. She plans to go back to Brazil and teach English at one of the schools.

“I want to be a kindergarten teacher. I talked to one of the principals and he said they’re always looking for people to come and teach the kids English.” 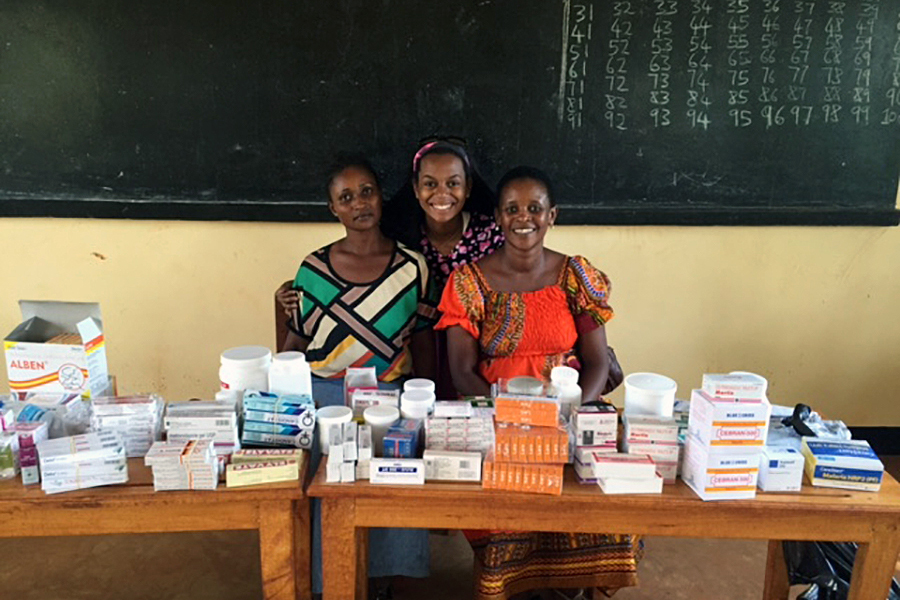 Senior Morgan Williams travelled to Moshi, Tanzania for two weeks through the KU chapter of MEDLIFE.

“I’ve always been the travel bug kid,” said Williams. “I’m also applying to med school so it’s great on applications, but for me it was more about that’s where my ancestry was from.”

There were five stations for the patients. The first was the triage station where the students were able to get hands-on clinical experience taking temperatures, vitals, etc., in order for the doctor to fully evaluate the patient. The second station was where the patients would see the doctors, get evaluated and get a prescription for their prognosis.

After the first week of MEDLIFE, the students were able to travel and see more of the country. Williams spent her week going on a safari, seeing beautiful waterfalls and climbing Mount Kilimanjaro to basecamp.

“I think I heard the words, ‘pole pole’ more than I heard anything,” said Williams. “It means slowly. That’s what they tell you while you’re going up because you need to acclimatize right.”

Williams shared her favorite experience from the trip – meeting a woman who believed she was 125 years old.

“She has more sass than anyone I’ve ever met and it was wonderful,” said Williams. “She didn’t have a birth certificate, she was born in a hut and her great grandson was 84 years old. We knew she was older, but we didn’t know how much older. I was standing in what I would consider greatness.”

After graduation, Williams plans to apply to medical school and hopes to go back to Africa someday soon.

“It really sparked my interest in to Doctors Without Borders,” said Williams. “I really want to see the rest of Africa because if Tanzania is that great, I can only imagine some other stories I could have going to different places. The sky is the limit at this point for me.”

These student-athletes were not only able to gain experience in their respective fields, but they were able to make a difference in the lives of others. They took advantage of their resources as a student and their talents as athletes to communicate with and teach people across the world.