Easton, Pa. –Winners of six straight and nine of their last 10, the Kansas Jayhawks hit the road for a five-game swing. Kansas will play first at Lafayette for a two-game midweek series, before traveling to West Virginia for a three-game set with the Mountaineers to open Big 12 Conference play.

The Jayhawks enter Tuesday’s matchup with Lafayette with a 12-6 mark overall.

Kansas is coming off a four-game home sweep of Creighton. In that series, the Jayhawks hit .320 as a team, scoring 36 runs in four games and picking up 14 extra-base hits on the weekend. The pitching staff, meanwhile, collected a 2.85 ERA in the series, holding Bluejay hitters to a .224 average over the four-game sweep. Kansas pitchers struck out 30 and walked just 12.

In the series versus the Blue Jays, the left side of the infield — shortstop Maui Ahuna and third baseman Skyler Messinger — stood out. The duo combined to go 17-for-31 with three doubles, one home run, 10 RBI, 10 runs scored, eight walks and three stolen bases. The two struck out only twice in 40 total plate appearances.

Dylan Ditzenberger also had a series to remember, going 8-for-19 with three doubles and a team-best eight RBI.

Turning the page forward, the Jayhawks will turn to a pair of left-handers for the two-game series at Lafayette in Steve Washilewski and Sam Brady.

Kansas enters the two-game series with Lafayette with a staff ERA of 3.24, which ranks second in the Big 12 and 28th nationally. The Jayhawk pitching staff tops the conference in fewest walks allowed per nine innings at 3.24 and ranks second in strikeout-to-walk ratio at 2.74. 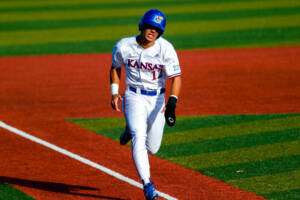 The Jayhawks have now earned that honor in back-to-back weeks after pitcher Cole Larsen shared the award the previous week.

Ahuna’s standout weekend against Creighton was a continuation of a stellar debut season in the Crimson and Blue. Ahuna is second on the team with a .352 batting average. He has started all 17 games he has appeared in and is tied for the team lead in walks with 14. He leads the team with an on-base percentage of .478.

Right-handed pitcher Cole Larsen’s breakout season continued this past weekend. Larsen tossed eight innings in the second game of the series against Creighton and allowed one earned run and struck out a career-high 10.

Larsen has now allowed just three earned runs in 34 innings this season and is 3-1 with a 0.79 ERA. He has allowed just one earned run over his last 17 innings, and has gone at least six innings in each of his four starts.

He logged back-to-back nine strikeout performances to start the season. Larsen appeared in four innings in relief against South Dakota State, tying his career best in strikeouts. He tallied the same feat in six innings against FGCU in the series finale Feb. 28.

Larsen isn’t the only Jayhawk off to a strong start on the mound. He and fellow right-handed starter Ryan Cyr rank second and fourth in the Big 12 respectively in strikeouts with 42 and 36. The duo rank in the top 55 nationally in strikeouts with Larsen ranked 15th in the country and Cyr ranked 54th.

Both Cyr and Larsen have totaled double-digit strikeout games this season. Cyr struck out 11 in the season opener against South Dakota State, while Larsen punched out 10 last weekend against Creighton.

JONAH ON THE SPOT

Closer Jonah Ulane picked up his fourth save of the season in the series finale against Creighton. His four saves rank first in the Big 12 and 12th nationally. Ulane has allowed two earned runs over nine innings this year with 10 strikeouts. Hitters are batting just .133 against him. He has appeared in a team-high seven games this season.

Ulane has held the opponents scoreless in six of his seven appearances. His only blemish came against Omaha, when he gave up two runs, but still earned the save.

Nolan Metcalf finished 6-for-11 with six RBI, two home runs and a walk to be named Big 12 Player of the Week for the opening series of the year (2/19-2/21) against South Dakota State. The hot start has continued for Metcalf, who enters this week’s games against Lafayette leading the team with 17 RBI. He is the only player on the team to have started all 18 games so far. He also leads the team in home runs, and is tied for second in hits with 21.

Metcalf is the first Jayhawk to be named Big 12 Player of the Week since Jaxx Groshans claimed the honor in the final week of voting during the 2019 season.

Kansas ranks in the top-60 in six NCAA categories:

Lafayette enters the two-game set with Kansas with a 4-1 record. The Leopards split two games with Wagner, before sweeping Holy Cross this past weekend in a three-game series. Justin Grech leads Lafayette so far on the young season. He is 7-for-16 with one triple, one home run, seven RBI, seven runs scored and a .625 on-base percentage. Ethan Stern also enters with a batting average north of .300 at .308, and ha sstarted all five games. He is tied for the team lead with three doubles and leads the squad with eight walks.

Lafayette is expected to start right-hander Joey Pence on Tuesday and follow with left-hander Jacob Ciccone on Wednesday. Jake Bloss leads the team with a 1.04 ERA in two appearances. He started one game and won, and earned a save in his other appearance. Lafayette has drawn 38 walks in five games and have a team on-base percentage of .430. The pitching staff is holding teams to a .188 batting average against.