RCW: A leader on the diamond and off 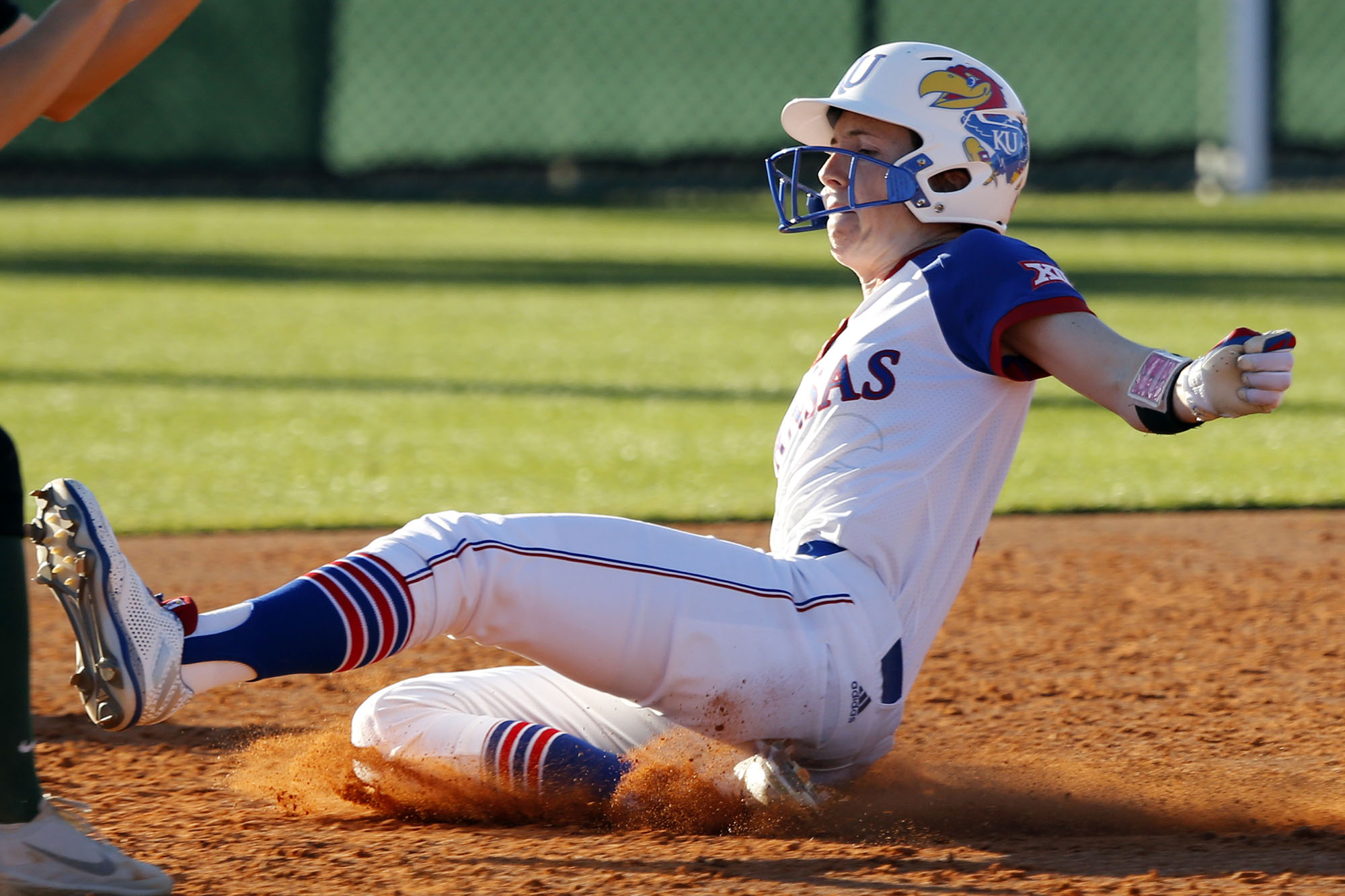 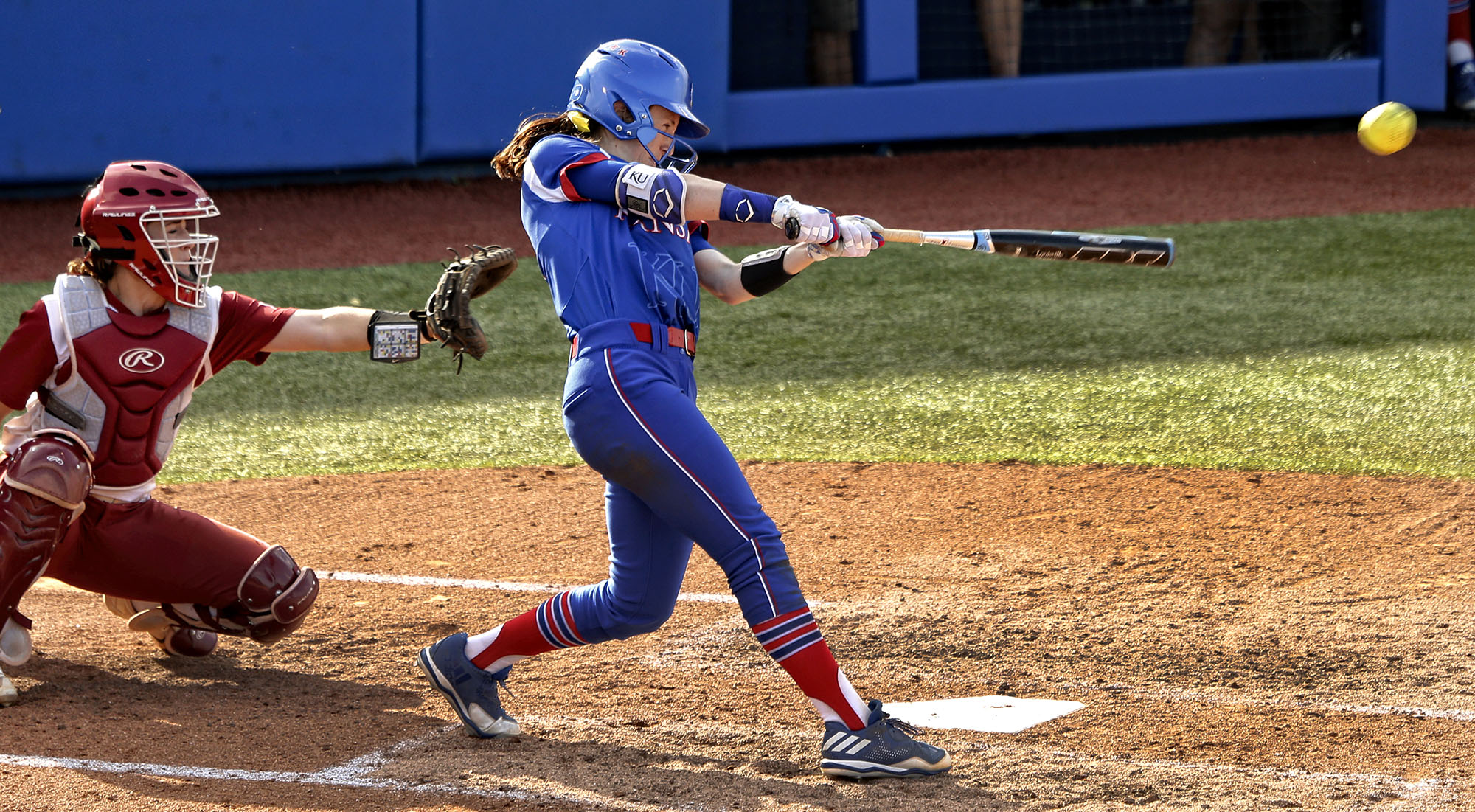 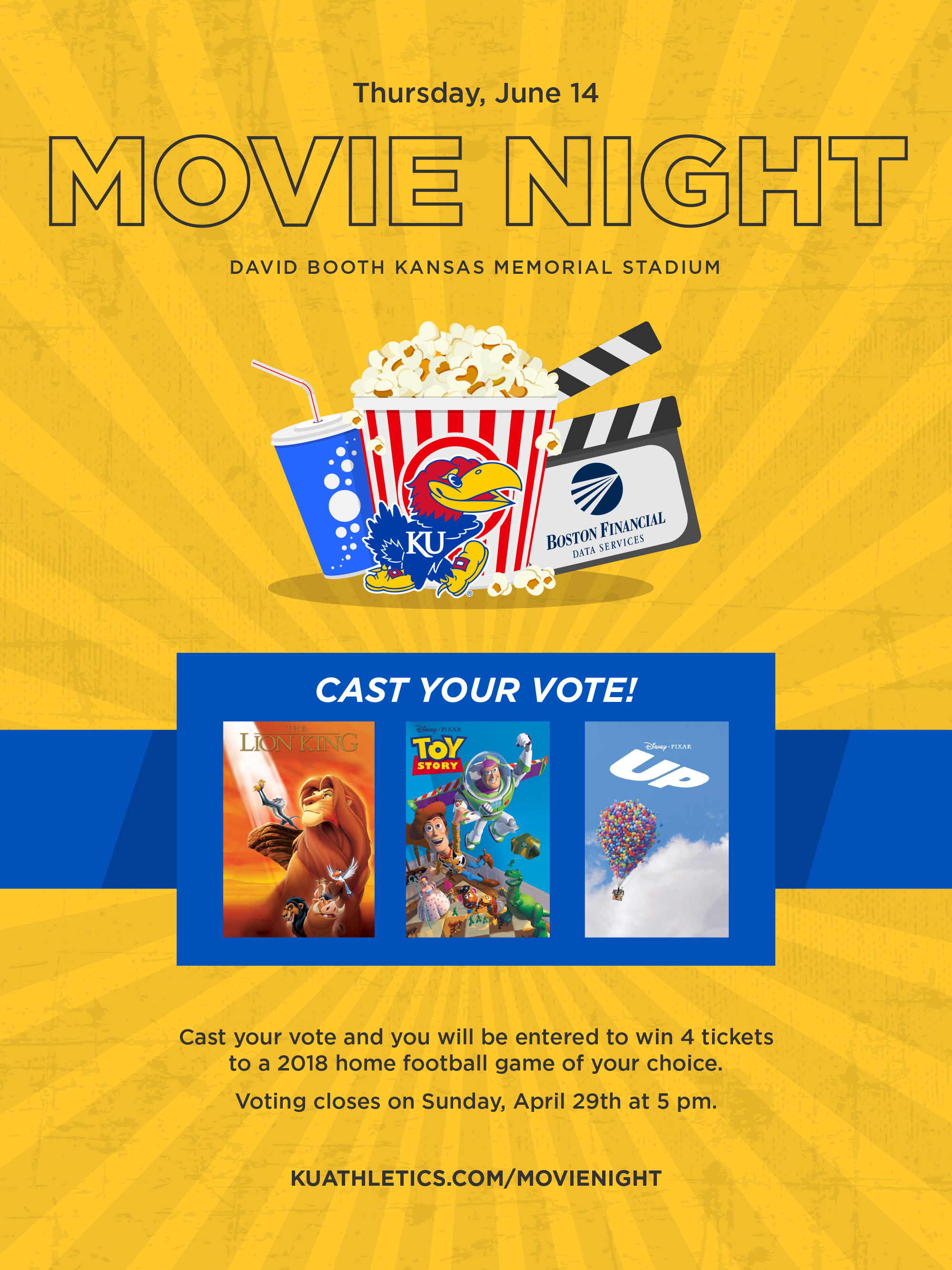 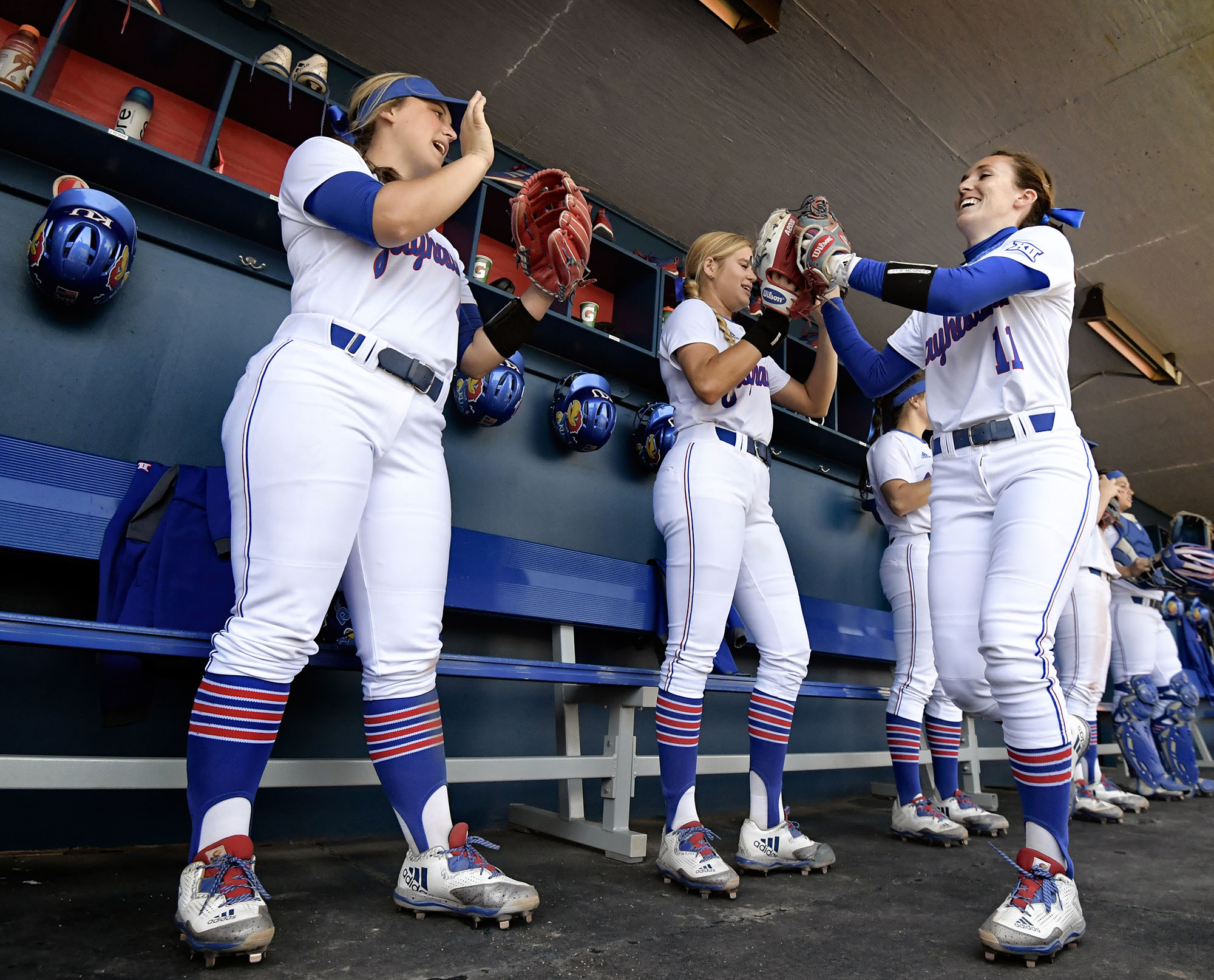 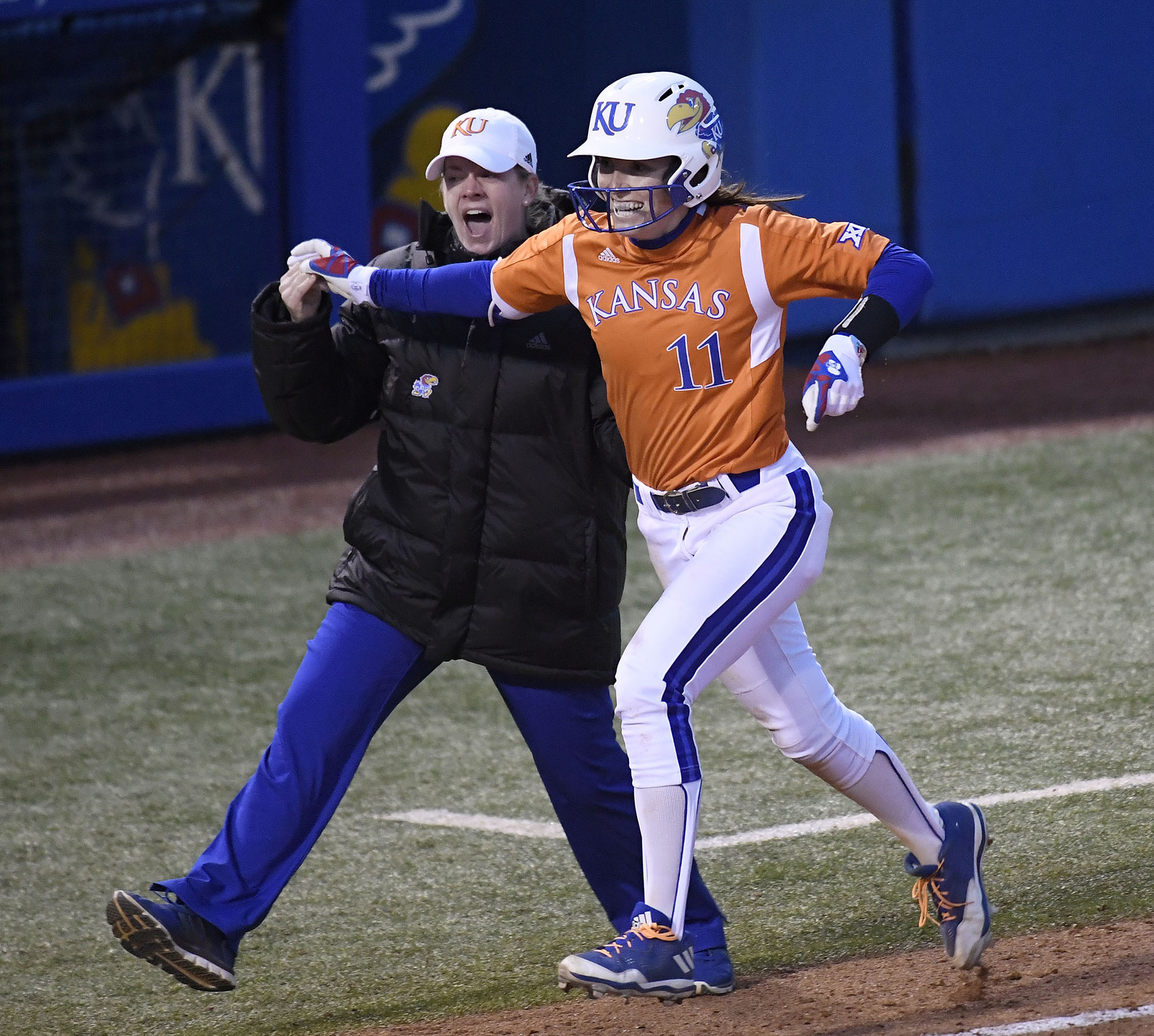 Erin McGinley, Kansas senior leftfielder, has played softball for at least 13 years. She knows the sport inside and out. It would be more accurate to say she knows sports in general. In high school, McGinley played basketball, volleyball and softball. But softball had a soft spot in her heart. And it shows, as she is now a starter for the Kansas softball team.

A Prairie Village, Kansas native, McGinley had planned on going to Baker University in nearby Baldwin City, Kansas. For that reason, she attended one of KU’s softball summer camps since she had heard Baker’s coach would be there. However, after her performance, McGinley’s father told her to contact the Kansas coaches. And from there, her journey as a Jayhawk started.

She worked herself up in the program. McGinley wasn’t a superstar as soon as she came to Kansas. She made her way to be a starter and, according to her, that is one of her greatest accomplishments while at KU.

“To have my work ethic pay off – all the work I put in freshman year – to pay off near the end of the season and to actually be able to play with my sister my freshman year and sophomore years (was a huge accomplishment),” McGinley said.

McGinley’s sister is a great influence on her. Shannon McGinley played softball at Kansas from 2014-16, and McGinley took that opportunity to play alongside her sister to establish herself as a team leader.

“There were two of us in a sense, so people looked up to us because if we were going to do extra hitting all the time, we could ask somebody else to come or something like that,” McGinley said.

However, McGinley’s position as a leader didn’t come solely because of her sister. McGinley is a “lead by example” player, so she puts in the effort to talk to the coaches, do extra work during practices and, eventually, gained the respect of her teammates. Both McGinley and her sister recognized this.

“My parents always taught me that if you’re going to do something, you better be the best one at it. Don’t be lazy,” McGinley said.

The older McGinley explained how her sister has always been a fair leader, listening to all parties when dealing with conflict and managing relationships to the best of her abilities. On top of that, McGinley seems to not only be intimidating toward the competition when on the softball field/diamond, but also never let herself become intimidated.

“Her steady and strong attitude earned her the entire team’s respect from the start. And from (her) freshman year to now that respect has only grown stronger,” Shannon explained of her younger sister.

“She will always tell it like it is – be your best friend when you need it and work as hard as she can to put KU in the best position to win,” Shannon continued. “She has incredible athletic talent. I think the team sees all of that in her and it’s hard not to follow suit.”

McGinley understands that being a leader is not always the best job. She has high expectations for herself, and that can lead to a feeling of letting people down when she doesn’t do her absolute best.

On top of being emotionally taxing, being a leader requires McGinley to have tough conversations with her teammates, and to have a demeanor and work ethic that is not as prevalent with other teammates.

“I try to be the person on the team who can’t be always joking around or laughing, but the person who enforces things like, ‘Hey it’s time to get it done and get down to business,'” McGinley said.

During this season, however, she received some help on how to better manage the relationships she has with her teammates. Brian Cain, a mental performance coach and best-selling writer, came to KU to talk to the softball team. From him, McGinley learned there was an opportunity to further develop her skills as a leader.

“Just because the coach says you’re a leader doesn’t mean everyone is going to listen to you,” McGinley explained.

Organic changes on the team put McGinley in an even better position to be a leader. During her freshman and sophomore seasons, McGinley was primarily stationed in right field. When her junior season came in 2017, she moved over to center field, the position that covers the most ground in the outfield.

And then, with her senior season, came another change. She slid over one more spot to left field, opening up the starter spot in center field for freshman Brittany Jackson. One might think this would create some tension, but McGinley saw it as an opportunity to mentor her new teammate.

“It helped me become a better leader, because while I’m not in what is seen as the leadership position in the outfield, I still need to be a leader because she (Brittany) is a freshman and it is her first year playing at this level,” McGinley said.

It is a deep connection and love for sport that enables McGinley to have this attitude. She has played softball for years, had the opportunity to play alongside her sister, and she loves the feeling of she and her teammates having each others’ backs. This camaraderie brings out the best in the players, and makes McGinley fall in love with the sport even more.

“If I have a bad day hitting, it doesn’t mean my teammates will have a bad day hitting. And it’s fun to cheer on people when you might not be performing the best. You might still be able to help your teammates perform their best,” McGinley said. “To be able to see everybody’s personality come out not only on the field, but also in the locker room when we have some more free time.”

This level of focus also shows itself outside of the softball world. McGinley has received several awards for academic excellence, which is a feat for any student-athlete, considering how much busier their lives are compared to other students.

Such excellence came with integrity. McGinley understands that having a schedule and following it is vital for success, in all areas of her life. In her first few seasons as a Jayhawk, it was rough to deal with academics and sports, but the support system McGinley had in her athletics family showed her how to develop a schedule that would work for her, and now she knows what to do. She organizes her life knowing she has class, practice, gym, dinner, homework, etc.

“You don’t get to go home and watch TV all the time. You have to plan out your day,” McGinley said.

Sometimes, the busy lifestyle gets to her, and she must take a step back and evaluate her schedule. Doing too much of either school or softball will overwhelm her, which makes balancing these two very important aspects of her life even more challenging.

“Sometimes you have a little bit of an emotional breakdown, because life just hits you hard,” McGinley said.

McGinley is only human. But this humanity generates humility. Humility, combined with sharpened leadership skills, makes McGinley a leader among outfielders, and the true leadership of KU softball this season.