This week, let’s take A Look Back at one of the early rules of women’s basketball relating to in-game coaching. Although women began playing basketball soon after it was invented, women’s basketball didn’t become a varsity sport at the University of Kansas until the 1968-69 school year. 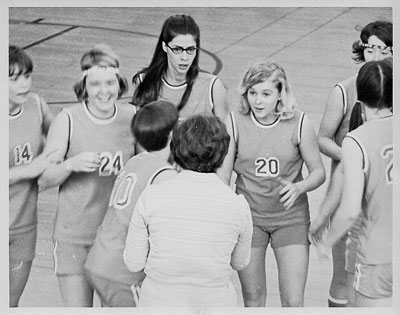 In the intervening years, the rules of the women’s game went through multiple iterations – at one point in the early 20th century, there were roughly five different versions of women’s rules (not including the men’s rules) for the women to play by.

In 1916-17, in-game coaching was prohibited.  At the time, there were neither timeouts nor substitutions allowed; therefore, coaching could only occur during halftime.  By 1951-52, coaching was permitted during timeouts – introduced in 1918-19 – and all intermissions.  In 1968-69, coaching from the sidelines was finally reinstituted and was no longer considered a foul.

Kansas women’s basketball has had seven head coaches prowling the sidelines since its inception… can you imagine the game if in-game coaching were still not permitted?