A member of the Kansas cross country team can run upwards of 30 miles a week during training and a three-and-a-half-month season can result in an accumulation of 500 miles or more. That’s enough to cross the state of Kansas.

One state or 500 miles can seem like a small number to someone who has moved thousands of miles throughout her life, but even single steps intimidatingly loom like a distant goal to someone with an injury. Kansas senior Hannah Dimmick has seen it through both lenses. The well-traveled Dimmick has overcome a devastating leg break to become a contributing member of KU’s cross country team, which opens its season Saturday with the Bob Timmons Dual Classic at Rim Rock Farm. 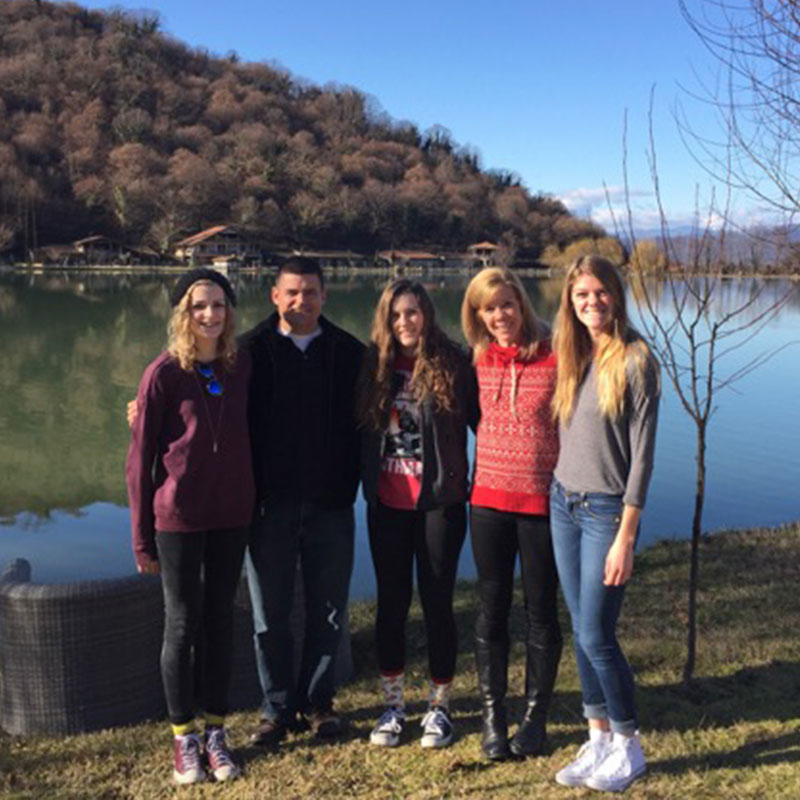 Dimmick spent her early years moving around with her family because her father is in the military. The Dimmicks moved 11 times and started the process of a 12th when Hannah graduated high school in Colorado. She was born in North Carolina and has lived in Virginia, Georgia, California, Moscow and Germany, twice, among other stops. Her father, Matt, attended KU before joining the military, but it wasn’t just her family ties that brought her to KU.

She credits her unique upbringing for her adaptability in life. Her sophomore year of high school, she qualified for the state cross country meet in Colorado. She also qualified for the state track meet three times and earned the attention and eventual scholarship offer from the University of Kansas, but an injury during her junior year provided a steep setback.

Late in the high school season, Dimmick noticed a pain in her leg that would cause her to limp after running on it for a while. She took a couple days off here and there but with qualifying track meets coming up, she was determined to push through. The injury, she now knows was a stress fracture, went from bad to worse during her 800-meter stretch of a relay event. 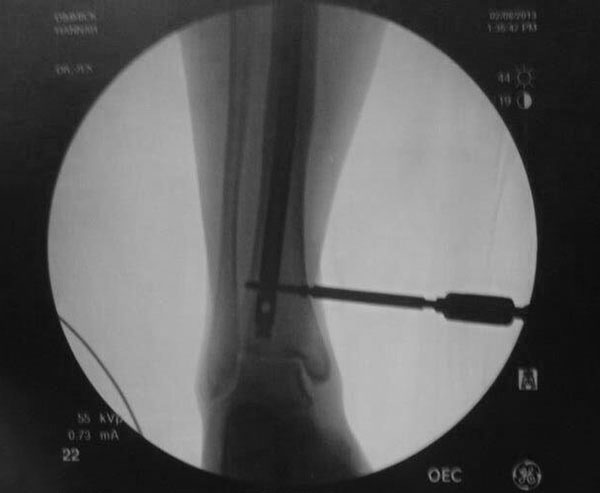 “I was anchoring, and about the 650-meter mark I felt something go really wrong, like a little snap that just made me think ‘Oh no’,” said Dimmick. “I could still limp-run and I easily had enough of a gap on the girl behind me that I would get the qualifying spot even if I walked it in. So I decided to just finish it out. Then around 750-meters, I heard a sound like stepping on a tree branch. I felt a really hot pain in my leg and I knew exactly what had happened.”

Recovering from a broken leg is not a quick process for distance runners. She visited a doctor that put her in a full leg cast over the summer and wanted Dimmick to take it easy. This meant she spent her senior cross country season as the team’s manager instead of competing.

“I think that really shows you who your friends are, what your coach is really like, how much you really care about what you’re doing,” said Dimmick, who was warmly welcomed and encouraged throughout. “Honestly, looking back I can’t believe I didn’t ever question I wanted to get back to running. It’s because I take that as a sign it absolutely was something I was meant to be doing.” 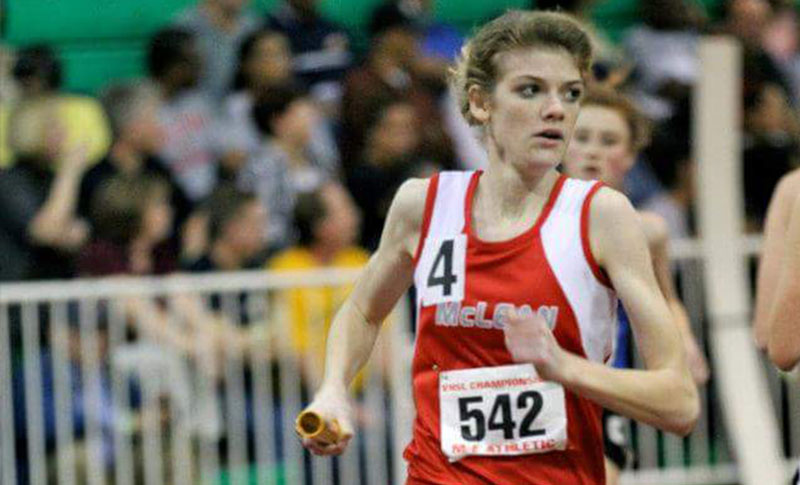 In January of her senior year, Dimmick was still not running and wanted a second opinion. She visited an orthopedic surgeon who suggested inserting a titanium rod in her leg. The doctor said she would be running within two weeks after the surgery. Sure enough, ten days after surgery Dimmick ran her first half-mile in nine months.

“When we as a program, as a university commit to somebody, to me that’s a commitment we’ve made and unless the doctor says they can no longer compete or participate – our commitment is our commitment,” Kansas cross country and distance coach Michael Whittelsey said. “I don’t think that should change unless there’s some kind of inappropriate personal misconduct. If we think they’re going to be able to help us prior to an injury, then depending on the injury we need to look at solving the problem and moving forward with it, but it’s always a commitment that you continue to honor.”

With a pre-injury history of strong times and good footspeed, to Whittelsey and the staff, it seemed like it would only be a matter of time until Dimmick returned to form and they bought some more of that time convincing her to redshirt as a true freshman.

“At the time it was kind of tough,” Dimmick said. “I didn’t get to travel at all and I had to watch my friend’s Snapchat stories of their fun trips and I was home alone every time.”

Despite the lack of immediate benefits, ensuring a full recovery and allowing Dimmick to gain strength rather than throwing away a year of eligibility allowed for reaching full potential in the future.

“I felt like it kind of redeemed my senior and got me back into the headspace that I needed to be in,” Dimmick said. “I don’t think I could have come off of the senior year I had and transitioned straight in to the intensity of college sports.”

Still the transition back to competing took time. Dimmick mentions trying to push in to pain instead of listening to it like she had for so long was a tough change.

Taking a season to become mentally and physical stronger paid off for Dimmick the following year. In her first race as a Jayhawk, the Bob Timmons Classic Duel, she placed seventh out of 127 runners. She cut six seconds off of her best 800-meter time in track that same year.

“She’s taken every year and gotten better every season whether it’s been an improvement in time or in confidence, learning the different things she needs to do to continue to get better,” said Whittlesey. “Her attitude has been fantastic since day one and her commitment and desire to be really, really good has been amazing. That desire is what it takes to really get through what she’s gone through.”

The redshirt season also helped her transition from high school academics to KU’s exercise science program. She has been on the Academic All Big 12 Team two years in a row, earning a 4.0 grade point average in 2015.

“Academically, KU was such a good decision for me,” said Dimmick. “I’ve gotten so much great experience. I’ve been working in the lab and I’m set up on a great program to get my Masters.”

Her opportunities with research in labs on campus have piqued her interest in that part of the field. While she wants to keep future plans open, she likes the sound of a doctorate and becoming a professor in exercise science.

Adding “Doctor” on to her name is still a few years down the road, but it is clear she can go the distance. 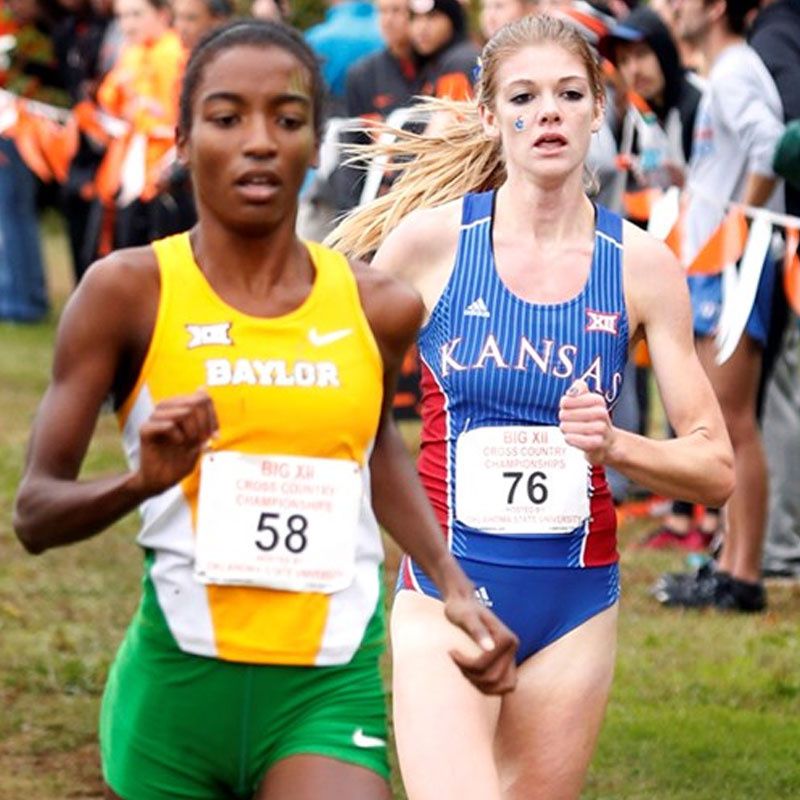 In the meantime, Dimmick is focused on the seasons in front of her. Last year, Kansas returned to the NCAA Championship for the first time in 21 years and then-freshman Sharon Lokedi placed in the top-10 – the best individual finish ever by a KU female at the meet. As a team, the Jayhawks finished 27th in 2015 and this year’s squad marks a return trip and establishing an annual visit the new standard as its goal. Included in that goal is improving the team’s standing.

With top-talent returning, including Dimmick, who continues to get stronger and stronger with every mile, and a talented incoming class, running in KU’s scoring five or making the postseason group as a top-seven member will be a challenge in itself. Still, the Jayhawks maintain a supportive, positive team culture.

“We have a really cool team coming in, because everyone could be in the top seven and at this point everyone wants to be on the team,” Dimmick said. “Everyone acknowledges everyone else’s talent, so we’ll be sending seven girls, but we send 16, really. I would love to be on that top seven team that goes on to nationals, but the number one goal is that we have a team there that is placing super high.”

As for track, she is starting a new event this season, continued evidence of the value of an extra year and gaining more strength. Previously, Dimmick ran the 800-meter event but will run the 1500-meter this season.

“Her strength work over the last couple years has been preparing her for that,” Whittelsey said of the shift. “One of the biggest differences that we always look at is whether you have the footspeed at the end of your race. You may be able to post fast runs, but in a kick-type of situation, are you getting through the runs and able to out-kick people at the end to win races?

“We’re always a strength towards speed perspective and the maturation of her now in her fourth year, she’s a lot stronger and she handled cross country really well by being our alternate at nationals. She has plenty of strength to be able to handle the 1500 without any problem.”

Dimmick’s nostalgia for the KU campus will continue throughout her life. She improved her running career, found her academic interests and a few other key pieces of her life here in Lawrence.

“The classic saying, ‘You come to college to find your bridesmaids,’ it’s a little cheesy but absolutely true,” Dimmick said. “I come back to Lawrence and it’s just as comfortable as going back to my own family. I can come home and relax and go to practice with girls who have really become like my sisters and super cheesy but so true.”

Dimmick recalls frustration and longing for simple things like painted bedroom walls or a senior year of running in high school. She now sees it as a part of the bigger picture that has shaped her life moving forward.

“Honestly, everyone has something hard in their life; you can’t have it all perfect,” Dimmick said. “For better or worse, it has made me the person I am today with all of the opinions and ways of solving problems, friends all over the country and all over the world.”

Dimmick’s legs have taken her around the world and back. Her resilience and determination to be better on the trails, the track or in the classroom show. No matter the distance, Dimmick has a bright future of running towards or encouraging others to greatness.