RCW: A Team of Her Own 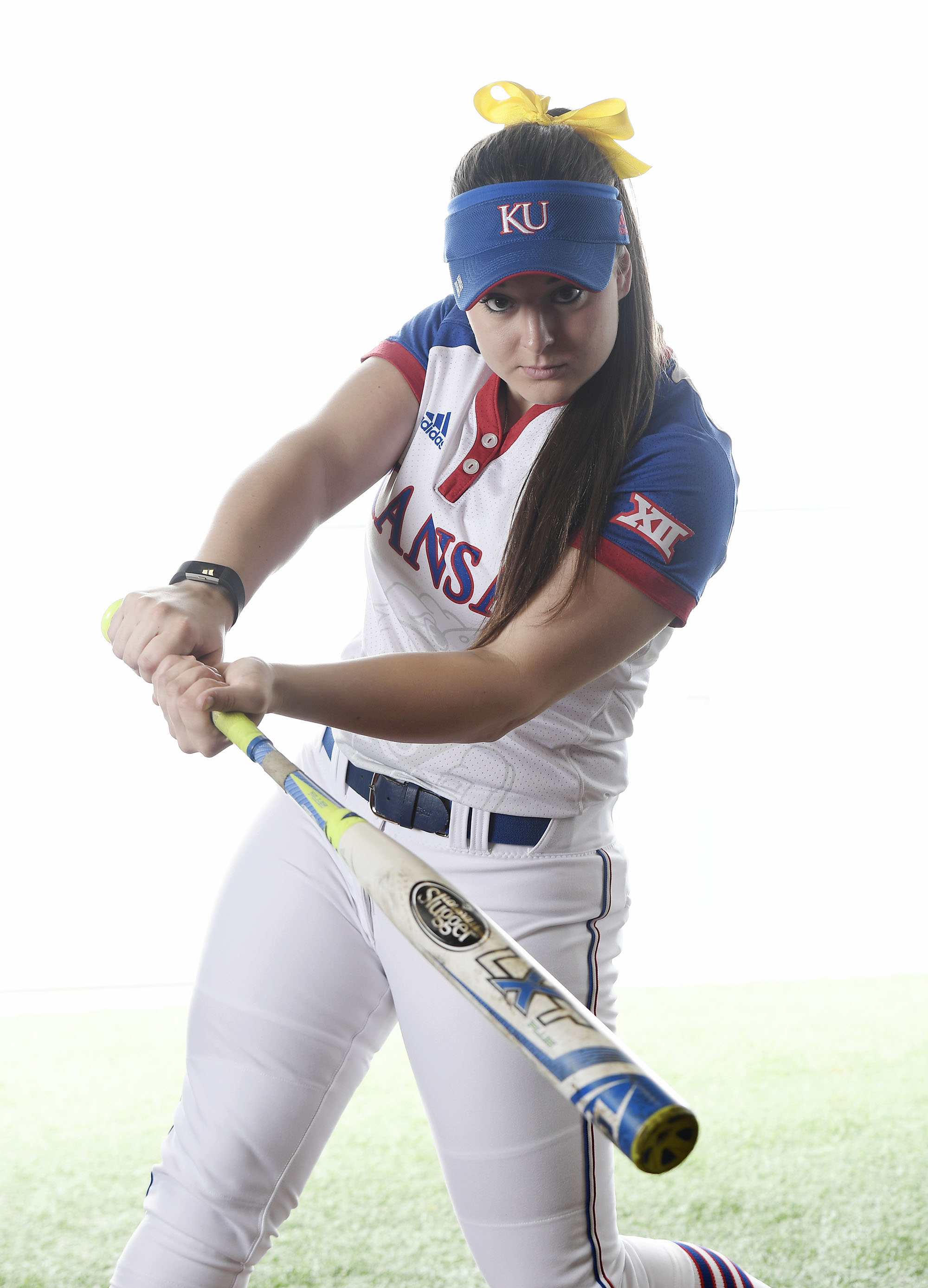 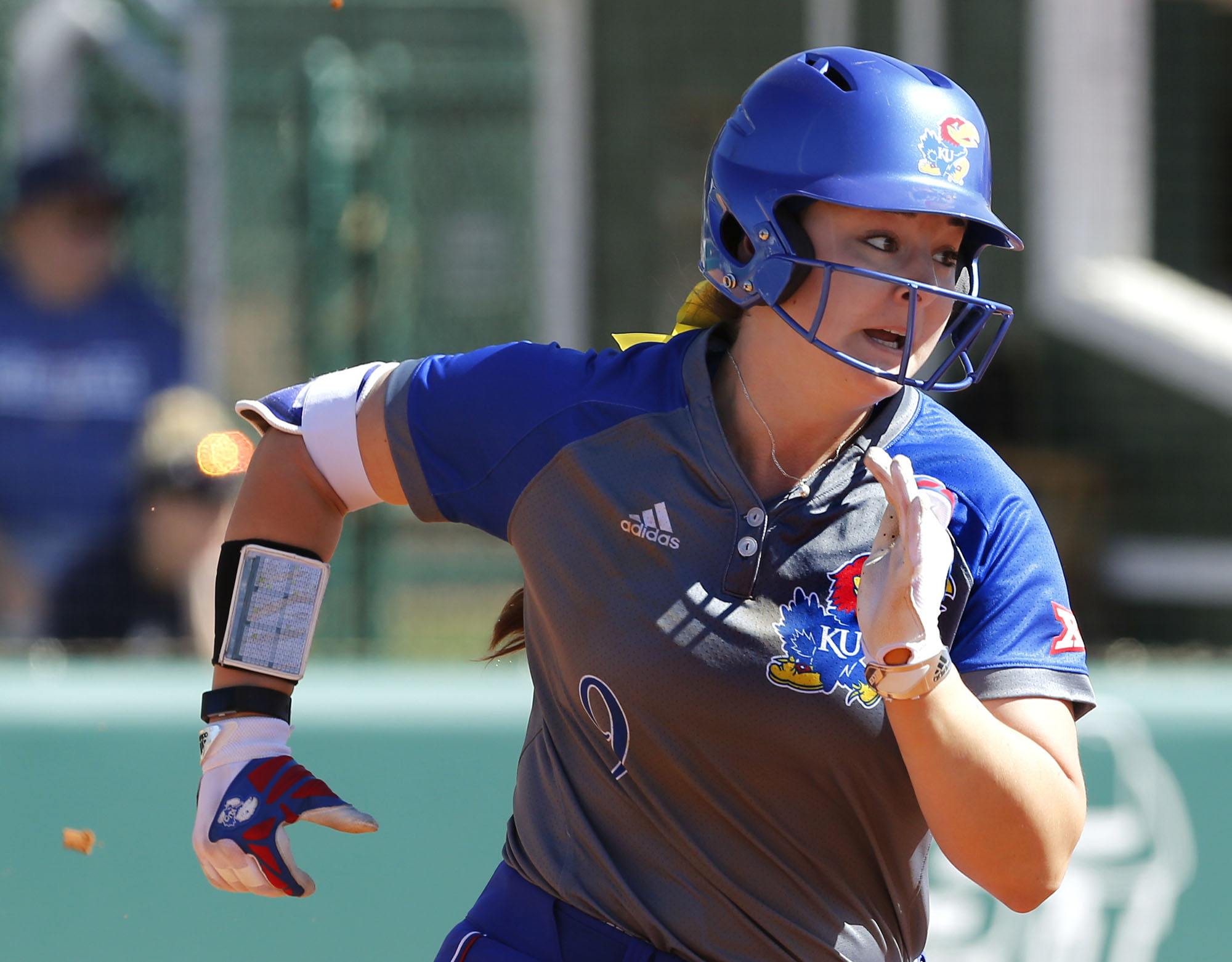 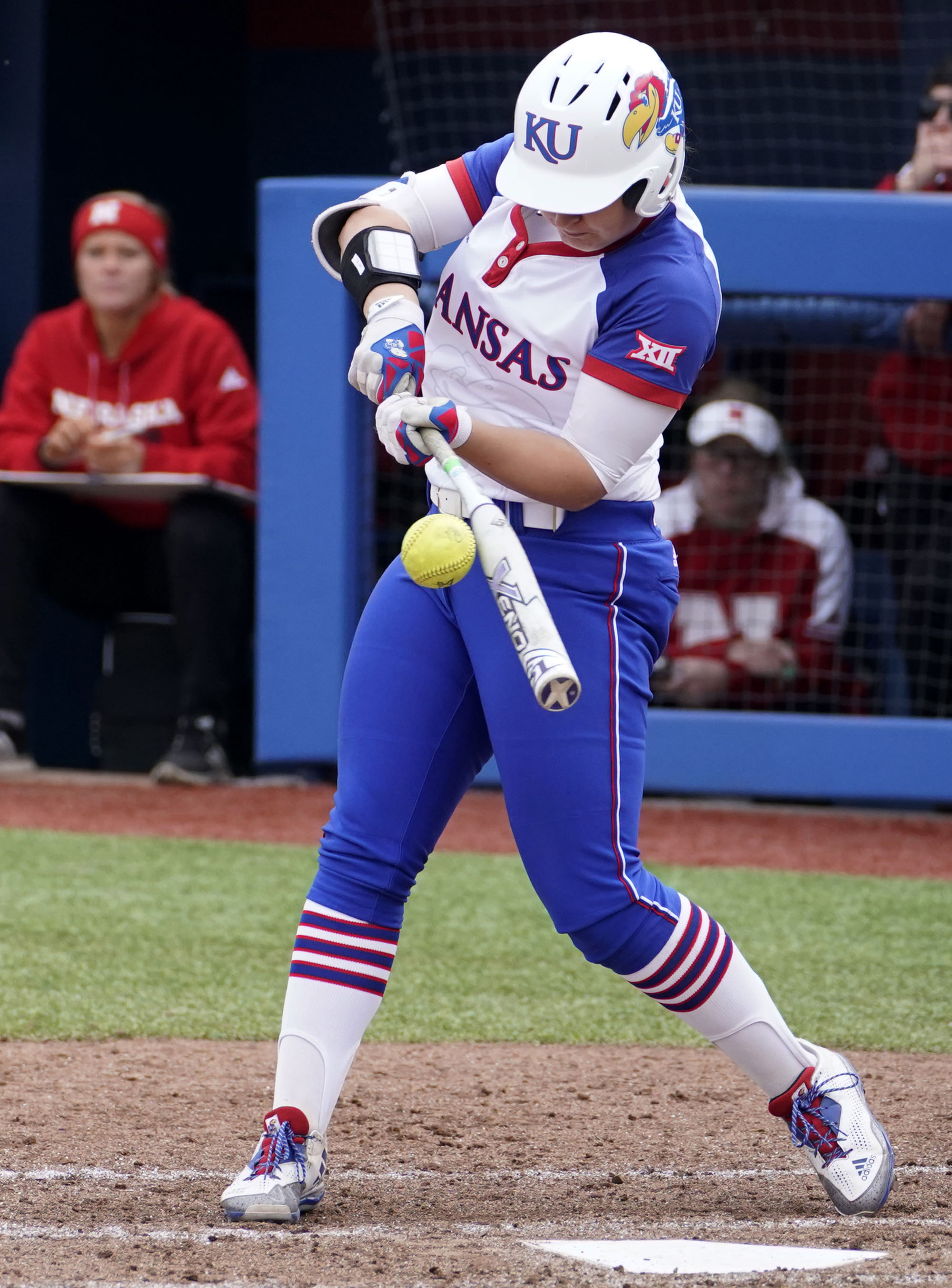 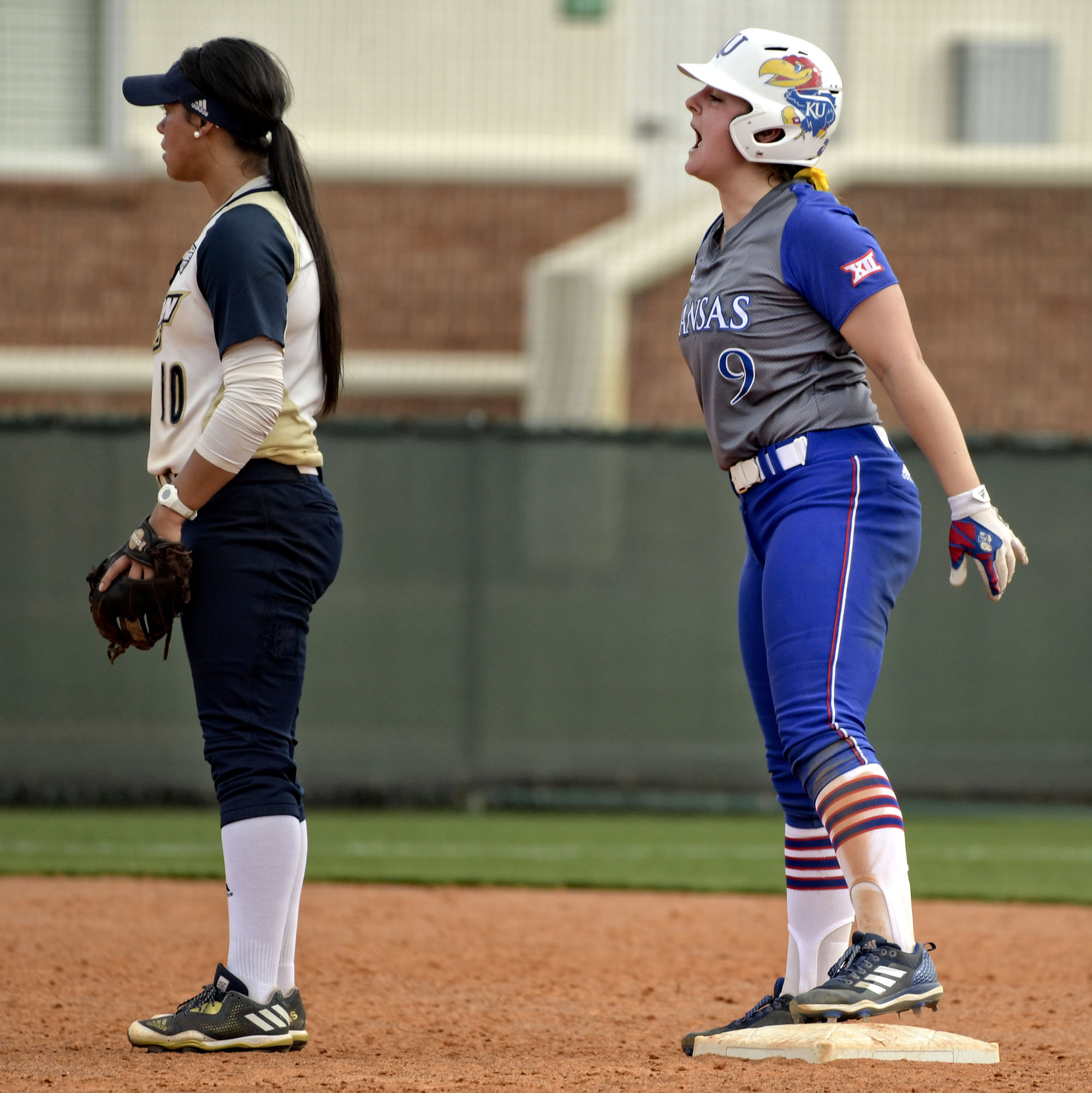 Having the opportunity to represent your home country playing the sport you love is something that does not come around often. Yet one of Kansas’ own softball players was given that exact chance to wear the words “Canada” across her chest.

KU sophomore first baseman Becki Monaghan remembers attending the Canada Cup as a little girl, looking up to the women who played back then. This past summer, it was her turn in the spotlight, taking pride in representing her home country.

“When I was (on the team), you get little girls looking up to you and you’re not just ‘Becki Monaghan’ anymore. You’re one of the Canadian Junior National players and you’re someone with ‘Team Canada’ across your chest,” the Stony Plain, Alberta native said.

Monaghan began playing on the Canadian National Team when she was in 10th grade, despite being slightly younger than the rest of the girls on the team. Her first and last year playing in the tournament with the national team, Canada ended up getting fourth place, both times falling to Puerto Rico. Despite the outcomes of those particular games, Monaghan said it was an experience she will never forget.

In her career on the Junior National Team, Monaghan helped her team claim the gold medal at the Canadian Open Fastpitch International Championships and also gold in tier two Canadian nationals. In 2013, Monaghan was tied for the most home runs on the team with eight total.

Her parents signed her up for softball when she was in seventh grade and Monaghan said originally, she was mad about it since she played so many other sports and did not want to go to practice. She remembers the first day, when she was unable to throw the ball half the distance as some of the more-experienced girls could. Her dad, Dale, gave her a month to decide if she liked softball enough to keep with it. About eight years later, it is safe to say she fell in love with the sport.

“The girls kept me there. I ended up making really good friends. Some I haven’t played with in years and they’re still my best friends. Once we began competing, I realized this was the sport for me,” Monaghan said.

Aside from the girls, Monaghan’s biggest influence in softball is her head coach from her time with the Rivercity Hornets, Rob Campbell. The Hornets were the gold medal U21 Provincial Championship team. Throughout her time on the team, he brought coaches from all over the United States and others from Canada to help develop his team.

“Coach Campbell started my softball career, essentially. He developed me in ways I can’t even imagine possible. He brought us together as a family and absolutely everything I’ve gotten to (do) is because of him. He’s been an amazing mentor,” she said.

When he first saw Monaghan play, Campbell said he could see she was an excellent player, saw that she works hard, listens well and took charge while also encouraging teammates, and he knew he wanted her on his team.

“She was a standout player. I thought she had what it took — character, hard work, tremendous leadership. As a coach, she taught me that it doesn’t matter who you are, you can be a good athlete,” Campbell said.

The game of softball has truly given Monaghan a lot, both on the field and in life. One of the main lessons she has learned over the years is being able to overcome adversity.

“Definitely in all aspects, one being adversity — whether you’re struggling in a game or your week hasn’t been very good practice-wise, you just have to be able to flip that switch and overcome it and move on to your next game — (that) has helped a lot with life,” she said.

On the other hand, Monaghan has found those lessons translate on the diamond as well.

With 25 girls in one room, all with different personalities who come from different states, countries and backgrounds, Monaghan said that being able to work with her team that way helped her to develop in the ability of being able to interact with all different types of people.

That helped Monaghan make the decision to attend school in a different country, especially when being recruited for a sport that was not as popular in her home country.

Coming to Lawrence, Kansas from Stony Plain, Alberta was a change, Monaghan said, but also that it is not terribly different. She said the biggest difference she could see was the culture change in how people interacted with each other and how different expectations were.

“Thankfully the (Canadian) Junior National Team prepared me for a more competitive team. My club team back home was very competitive, but we were very relaxed, and there was a family environment,” she said. “While here at KU, it is obviously a family environment, but it’s more competitive and (we are) focusing on little details. That was something the Junior National Team definitely prepared me for.”

For Monaghan, Lawrence wasn’t too far off the radar when looking to play at the collegiate level. A friend of Maggie Hull-Tietz, a former player at Kansas who is now the team’s director of operations, was up in Canada coaching, saw Monaghan and sent the information on Monaghan to Hull-Tietz, who then sent the video to Kansas’ current head softball coach, Megan Smith.

Monaghan said that coming to KU means the world to her and that she could not imagine going to school anywhere else.

“I think it means honestly everything for my future. KU is an amazing school academically and historically. I mean, KU is older than Canada as a country, so just the thought of that is amazing,” she said.

But Monaghan has not forgotten about the opportunities on the field that Kansas has presented her either.

“The softball (at KU) is amazing. It is a great, great group of girls and a great feeling when you play with them,” she said. “I feel like I am showing my coach back home and my parents that they did things for me, helped me and pushed me forward and that their encouragement is what led me to success in my life.”

The impact that playing Division I collegiate softball has really hit the sophomore when Kansas played Oklahoma (OU) in Lawrence last season. Since Canada has only a few collegiate softball programs throughout the country, it was different seeing and getting used to the competitiveness in the states. Monaghan remembers going to a tournament and watching OU win the Women’s College World Series in 2013, thinking about how good of a team they were then. Facing the Sooners at Arrocha Ballpark was when it really kicked in that college softball was bigger than she was used to.

Another one of those opportunities she has encountered at Kansas is a position change that led her to being named Kansas’ 2017 Rookie of the Year. When Monaghan arrived at KU, Smith saw her as a first baseman rather than at catcher, the position she had always played previously. Monaghan knows that being open to playing a new position was helpful for not only herself, but her team. Not only did it give her a chance to play more games, but also the opportunity to be a starter; this time donning “Kansas” across her chest.

“I can honestly say I love first base, it’s been a great experience. I miss (catching) a little bit, but I just love first base and I think that that’s my future,” she said.

As for that future, Monaghan hopes to play for the Canadian Senior National Team next year. She will take this summer off, as the 20-year-old is in the age gap between the two national teams. However, the 2020 Olympics are coming up and Monaghan is gearing up for an opportunity to compete for her home country of Canada in Tokyo that summer. The sophomore marketing and management leadership double major dreams to one day work in the marketing department with the Edmonton Oilers of the National Hockey League (NHL), but for now, she will continue her collegiate career at Kansas.

“There are some amazing girls here and I know I’ve got a great family for years to come,” Monaghan concluded.