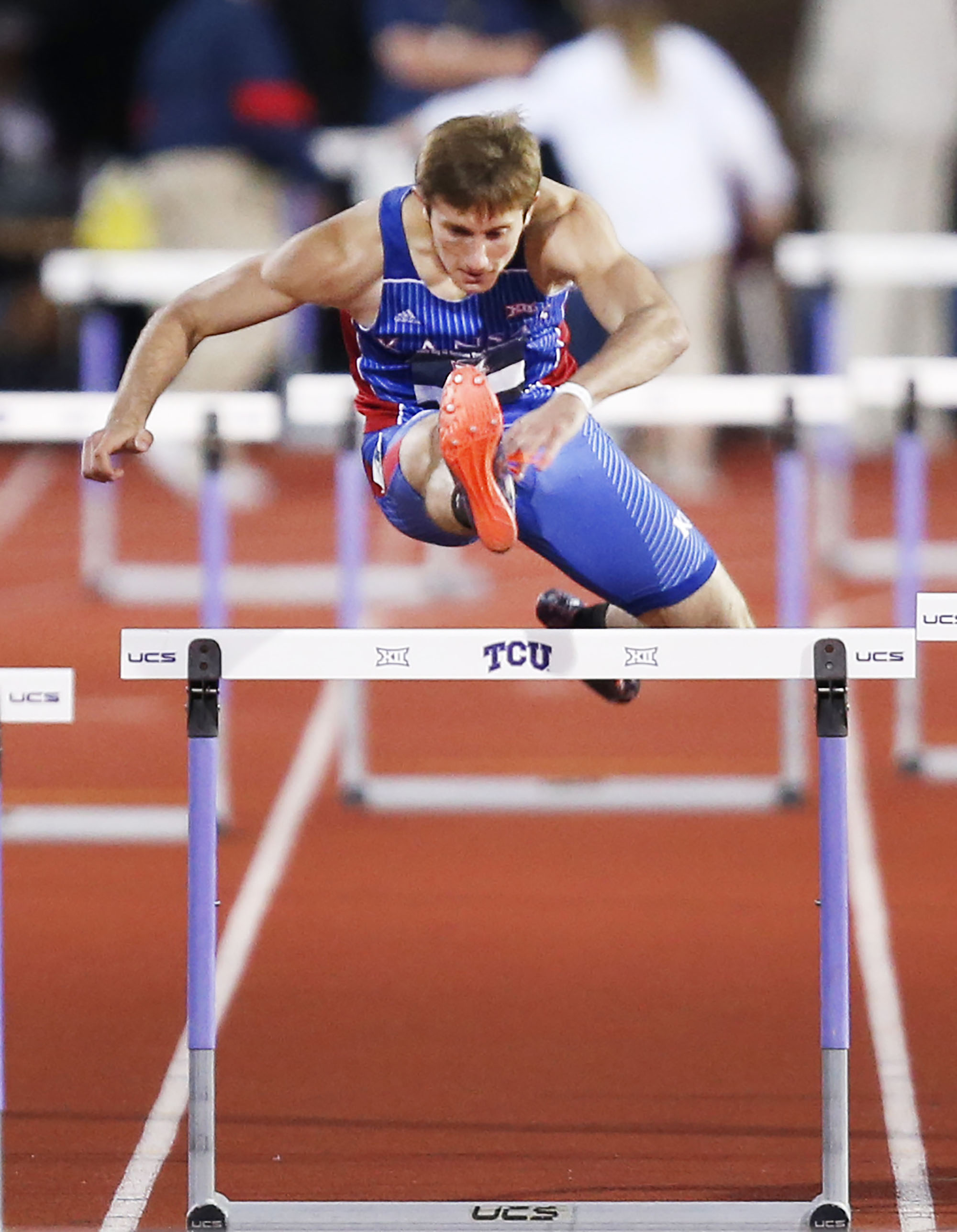 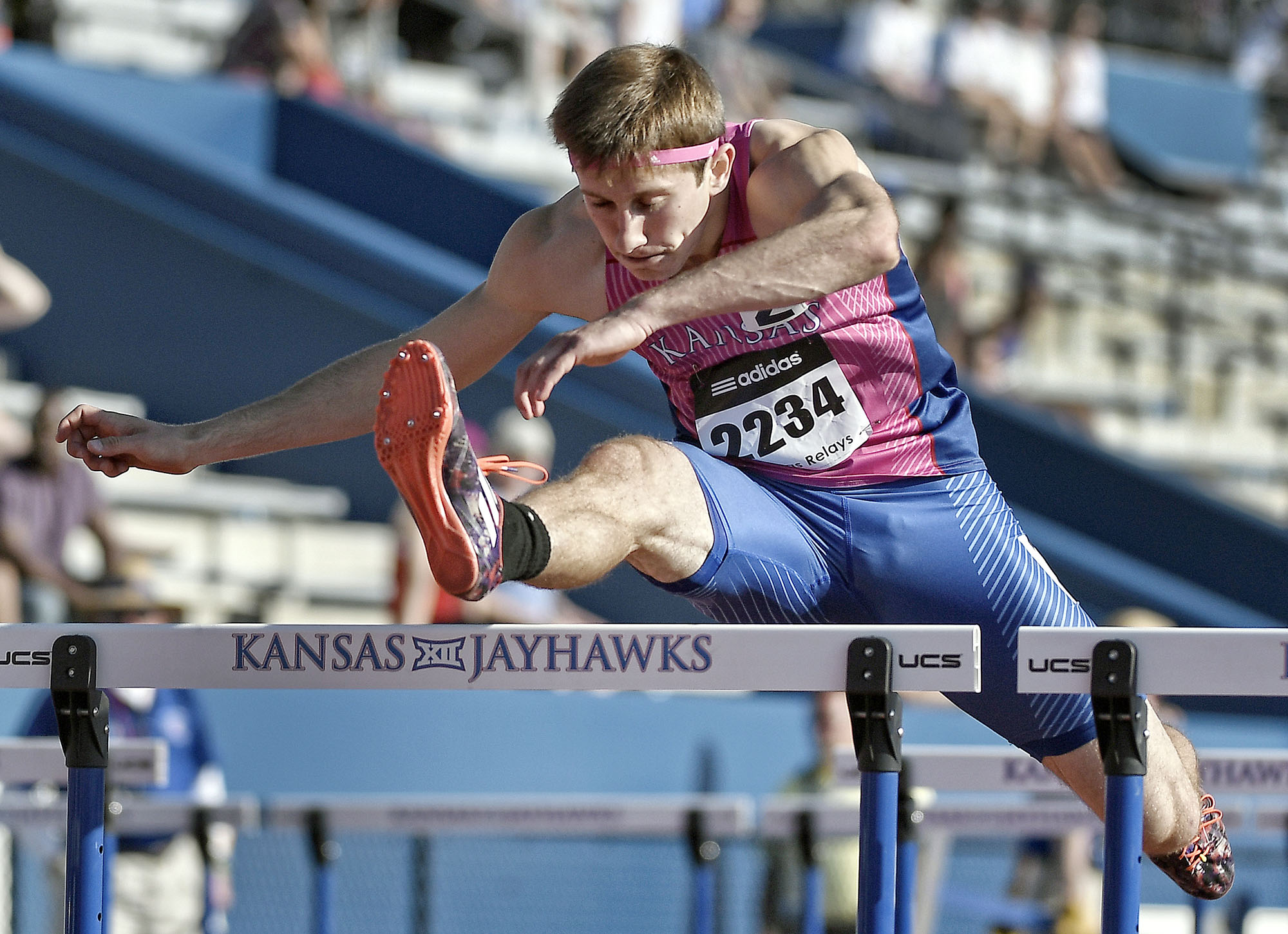 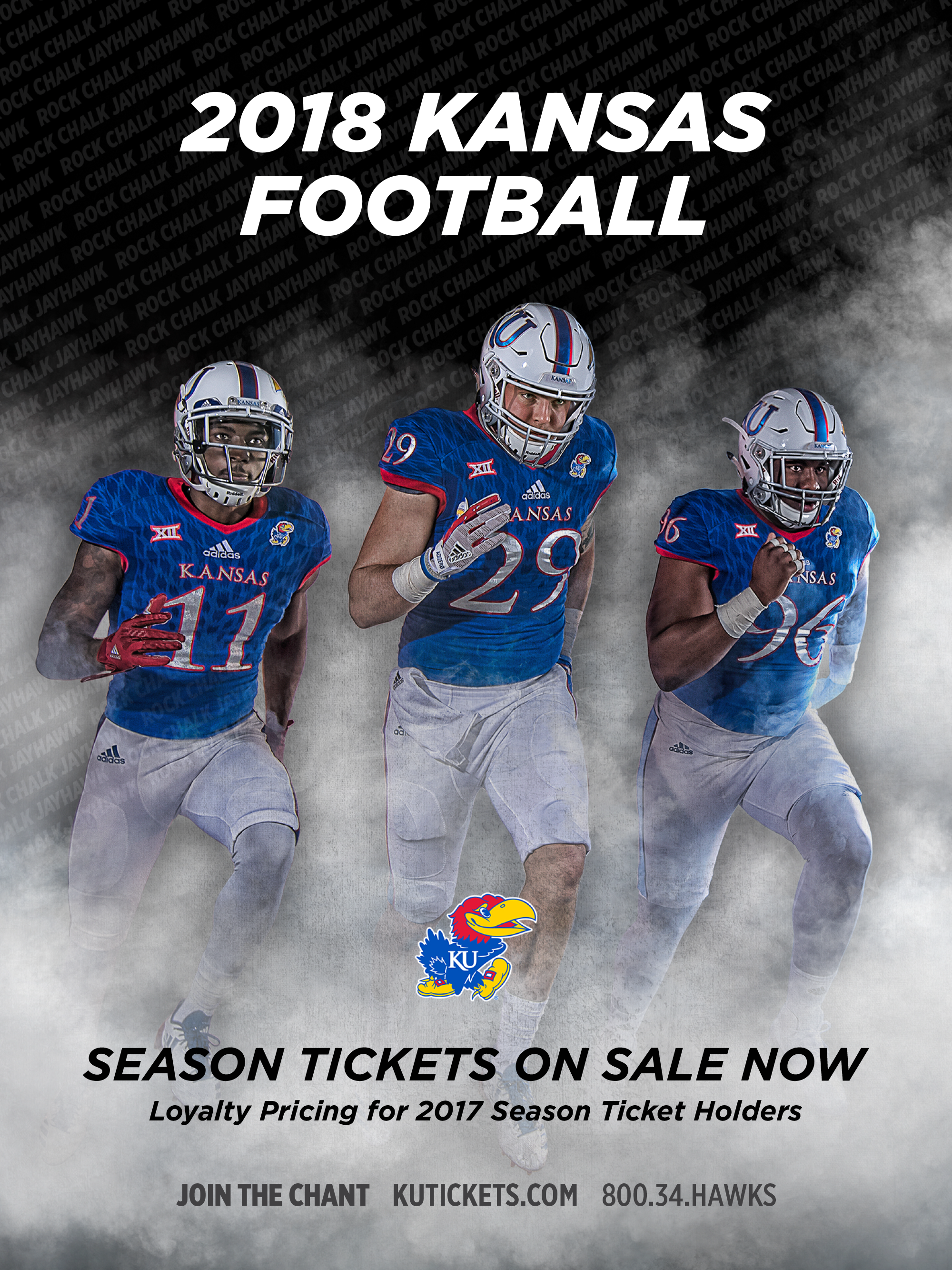 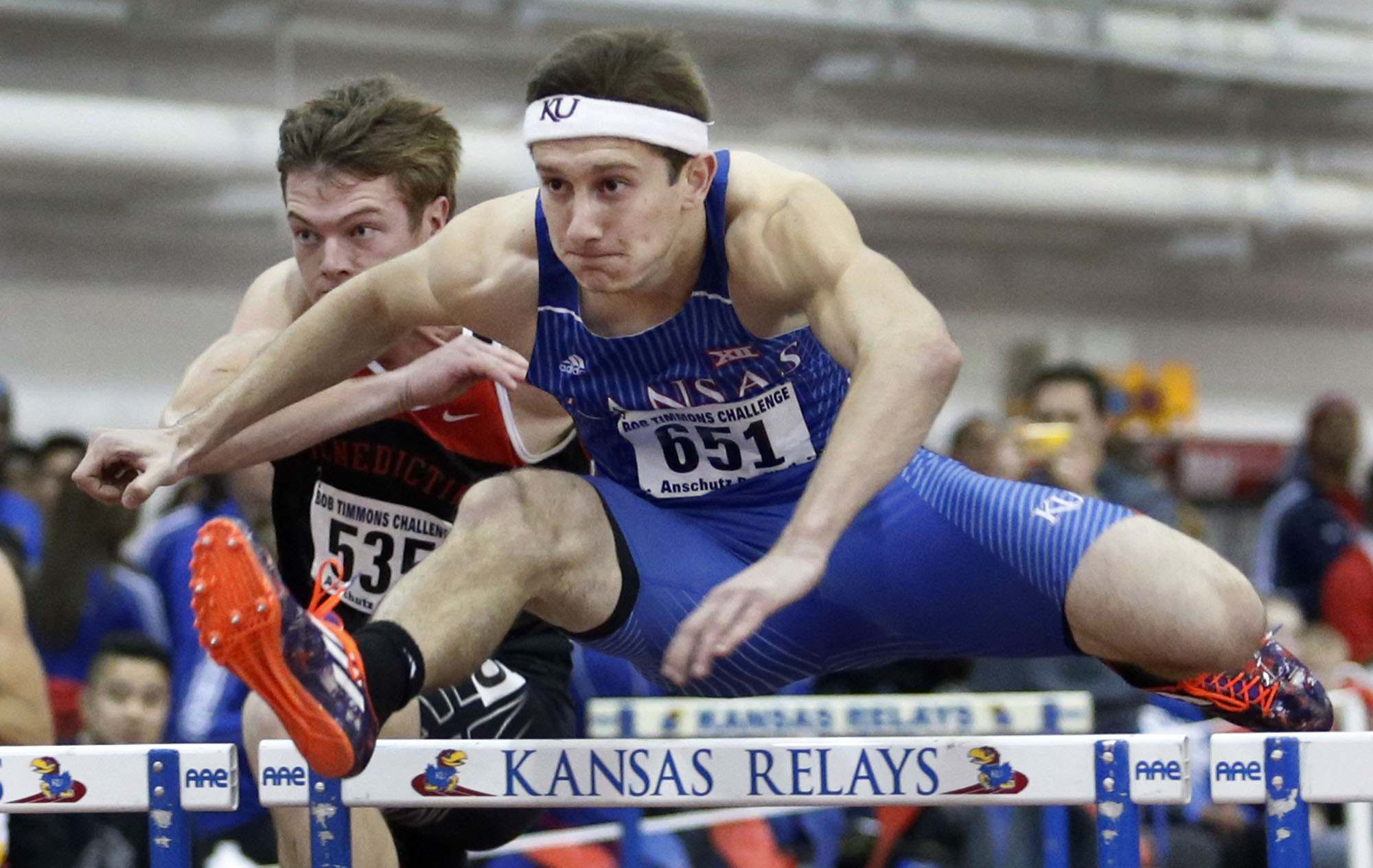 Rejection. It is something that everyone has faced in their journey of life. Some face rejection more than others, and some face much harsher rejections. One thing stands true about rejection: it does not have to define you. Instead, it is the way you react when rejection hits that matters the most.

People respond to rejection differently. Some are resilient and keep pushing, while others just give up because they feel it’s the easiest thing to do. Kansas track & field senior hurdler, Nick Giusti, faced that tough choice with athletics.

Growing up, Giusti played all the basic sports a kid plays; basketball, football, soccer and baseball. Baseball soon became his passion and his specialization. But by the time he got to high school, he was cut from the baseball team.

Before the rejection of baseball, Giusti and his family had to face the hardship of being moved all over the world because his dad was in the military. He had lived as far away as Germany for four years.

After being cut from the baseball team, Giusti could have easily given up on all things sports but instead he decided to continue his athletic career by trying track.

Near the end of his high school career, Giusti’s coach threw him into a hurdle race because he thought it was something Giusti might be good at. Turns out, his coach was right and Giusti was good at the hurdles.

“After my first race in hurdles of my senior year, I just kept practicing harder and harder,” said Giusti. “I ended up going to state and winning state in my first year of hurdling.”

Even after his success at state, Giusti wasn’t planning on pursuing college athletics because he didn’t believe it was an option for him.

“I had always said that if I had the opportunity to compete in any sport at the Division I level that I would. But I never expected it to happen,” Giusti said.

Giusti had planned to attend The Ohio State University to be a “regular” college student, until Kansas sprints and hurdles coach Elisha Brewer called him.

“I already had my summer orientation and everything. It was three days before I was going to be leaving for Ohio that Coach Brewer called me. When she called, I went on a visit (to the University of Kansas) and ended up deciding to come here,” Giusti explained of his last-minute change in plans.

At the time, Giusti had not been heavily recruited by Brewer and Kansas. But due to his prior aspirations to compete athletically at the Division I level, he became persistent in his ways once he knew Brewer had the slightest interest in him.

“He would call and email me, even when I wouldn’t necessarily respond,” Brewer said. “He was persistent and wouldn’t give up. His consistency eventually got me to respond and it went from there.”

The call Brewer made turned out to be a solid one. Since joining the Jayhawk track & field team as a freshman in 2015, Giusti has since become a consistent top-10 finisher for KU in his races. Over the course of his collegiate career, Giusti has become a force to be reckoned with not only on the track, but as well as a reliable piece of the Kansas track & field team – as one of its leaders.

“I believe what makes a good leader is when someone speaks, but others listen and respond,” Brewer explained of her senior hurdler. “I (have) always trusted him to say the right things and I think the team trusted him as a leader.”

Although being a good leader isn’t a necessity in certain professions, it’s a great quality to have no matter the field you end up in.

Giusti had originally decided to pursue a degree in engineering at Kansas, but that would change very quickly.

“After a semester of engineering, I decided I just really didn’t like it,” Giusti said.

Similar to the conflict he faced when he was cut from the baseball team in high schoool, Giusti could have easily given up and chosen a new major that he felt was “easy” to follow through with. But instead, he thought bigger.

Every kid once dreams about being a doctor, but few actually follow through and attempt to become one. Being a doctor never seemed like a real option for Giusti since he thought he was going into the engineering field. He was eventually given a chance to shadow an orthopedic surgeon and soon after, he realized he had a newfound passion.

“I thought it was so cool,” Giusti said. “I realized it was an opportunity for me to stay around sports.”

Have you ever loved something so much that you would do anything to stay around it? That is the way Giusti feels about a future profession in the sports industry.

People always advise you while growing up to choose a career that you are passionate about; one in which you can enjoy every day of work so much that it never truly feels like you are working. Throughout his life, Giusti has had an on-and-off-the field love for sports. His other passion? Helping others.

“What I really love most about medicine and becoming a doctor is being able to help other people,” Giusti explained. “I think it’s really cool getting to be able to meet people and eventually help them overcome something.”

Giusti once dreamt about being a professional baseball player, and even considered becoming a pilot one day.

“My dad was a pilot in the Air Force,” Giusti said. “So I always thought it’d be cool to fly planes because I grew up in the cockpit with him.”

Like so many of the rest of us when it comes to our futures, Giusti has big aspirations.

“My dream moment is to turn on ESPN one day and see (a headline like) ‘Star athlete faces terrible injury, but doctors say the surgery went well,’ and (I want to) be able to say that I was that doctor,” Giusti explained.

Being a doctor encompasses a large amount of responsibility, but Brewer believes Giusti can handle the pressure.

“He’s a natural-born leader and his confidence spreads to those around him,” Brewer said. “I was always able to rely on him for so many things.”

A coach can make or break an athlete’s experiences with a sport. But it seems as though Brewer and Giusti hit the jackpot when they found each other at Kansas. Brewer believes the pair has had a solid coach/student-athlete relationship over the past four years together.

“We had a strong enough relationship to where we were able to talk (about things) outside of the sport,” Brewer described of Giusti. “He would stop by unannounced just to talk. We’d talk about school, home and his parents. We respect one another and care for one another.”

Brewer has high expectations for Giusti, just like he has for himself.

Before he pursues his career in the medical field, Giusti has dreams he wants to achieve within his track career first.

“I want to finish out the season and place at (the Big 12) conference (meet) in both the hurdle races,” Giusti said.

Battling an injury that he endured two weeks prior to the conference meet, Giusti did not end up placing at this year’s Big 12 Championship, but that doesn’t mean his career wasn’t a success.

Take a moment to think about where you are, right now, in life. Consider the rejections you have faced, both in the past and maybe even recently. Did you let them keep you down? Or did you, like Nick Giusti has done multiple times, stand up and decide to push harder in order to prove you cannot be dismissed so easily?