RCW: Back to his roots

Freshman forward Mitch Lightfoot found his home roots pulling for him in his decision on where to play collegiate basketball. He kept his options open, but there was just something about that Kansas feel.

“They asked me where I wanted to end up, and I said I want to go big or go home.”

For Kansas freshman forward Mitch Lightfoot, going big inevitably meant going home too. His journey back to Kansas starts with his roots.

Lightfoot lived in Kansas City, close to the MCI airport, until he was five years old. His father’s job entails relocation some of the time and this was one of those times for the Lightfoot family. They picked up and moved to Tucson, Arizona in 2003. Much of Lightfoot’s extended family still remained in the Kansas City area and many were true Jayhawk fans at heart. 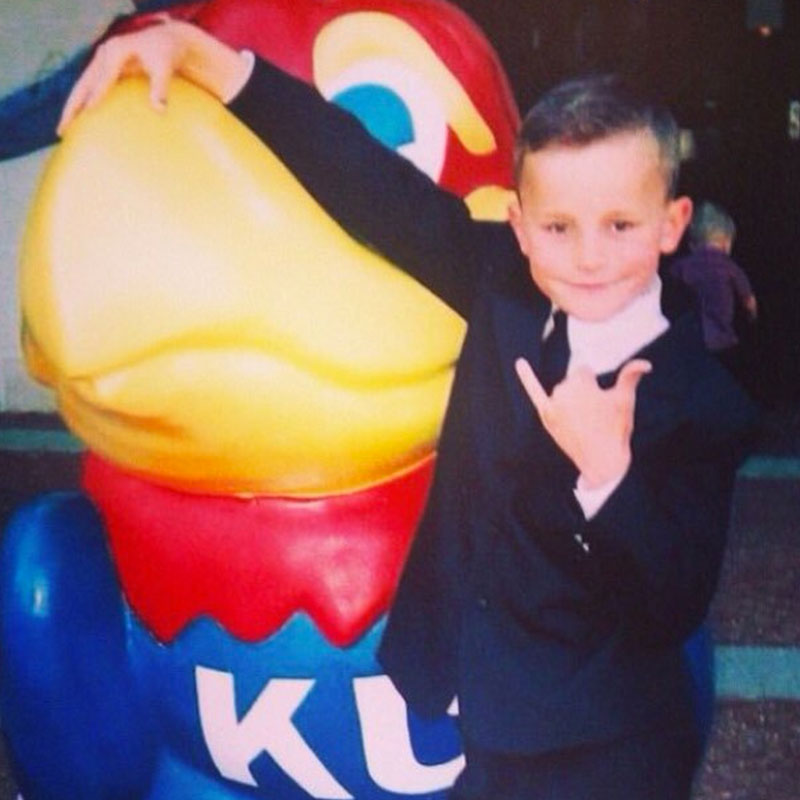 “I have tons of pictures of me in baby KU outfits,” said Lightfoot. “My aunt went here and she is definitely the biggest fan ever – she is die hard KU, really that whole side of the family is.”

Although Lightfoot’s parents did not attend KU, they were both student-athletes at schools in the Kansas City area. Lightfoot’s father was a high jumper and basketball player at Baker University while Lightfoot’s mother played basketball and volleyball at Rockhurst University. You could say sports are in the Lightfoot blood.

Lightfoot picked up the game of basketball when he was six years old, after he had made the adjustment to Arizona. He had always watched the sport and enjoyed it, but never played organized basketball at that young of an age.

However, basketball wasn’t the only sport that caught his eye while growing up. Lightfoot also enjoyed football and was pretty decent at the sport.

“I realized I should probably lean more toward basketball once I got older…and taller than everyone else,” said Lightfoot.

“I liked the pace of the sport, the conditioning of it,” he continued. “Not everyone can just go out and play basketball. You’ve got to be in shape and put the work in to get there and I liked that about it.”

Lightfoot switched his focus solely to basketball his freshman year of high school when his coach at the time said that he’d fall behind if he tried to juggle multiple sports while other athletes had already begun specializing in one.

The idea of wanting to do something that would pay for college was always on Lightfoot’s mind.

“I wanted to figure out something I could do that would set me apart so that I could make that idea a reality,” Lightfoot said. “And for me, that was basketball.”

Lightfoot kept his mind open to new opportunities near and far when it came to looking for schools to pursue his higher education at. He had moved states at a young age and was also exposed to the experience of travel. Lightfoot’s grandparents worked for the airlines, so he was able to visit and see a multitude of places across the country. This made him susceptible and willing to relocate anywhere that seemed fit.

In the early stages of recruitment, Lightfoot said that he initially waited to see what schools came to him. New Mexico was one of the front runners for him and he actually committed to them his sophomore year in high school.

“They were the first ones to show me love, so as a sophomore in high school it was exciting to have a school like that want you,” said Lightfoot.

As time went on, Lightfoot ended up being unsatisfied with his early decision. He felt he was immature at the time of his initial decision and didn’t really have a full grasp on himself yet. 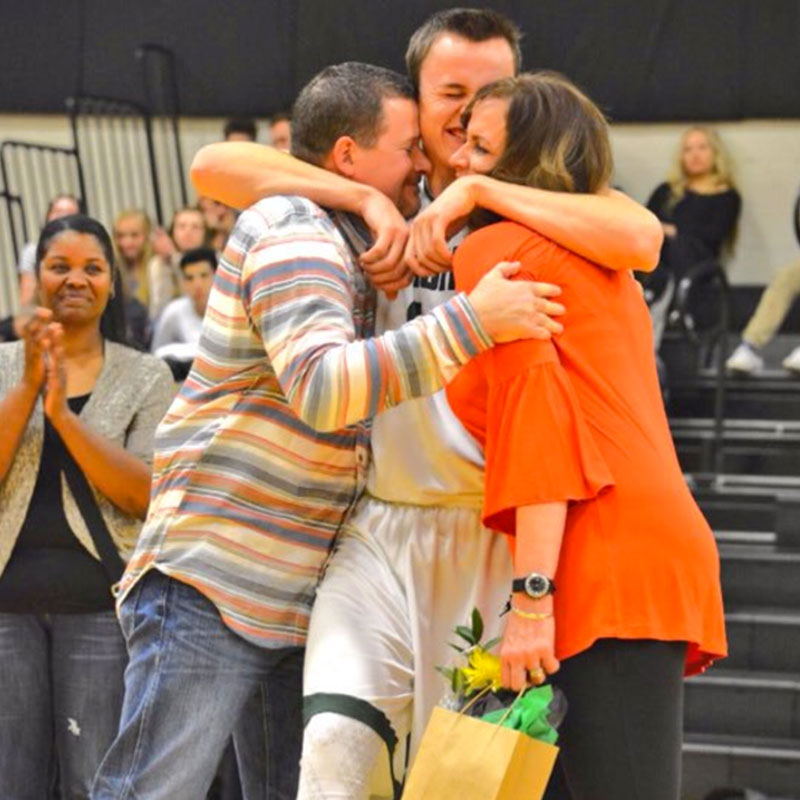 “I de-committed from them and at that point my coaches and parents sat me down and said, ‘If we are going to do this, we are going to do it right,'” said Lightfoot. “I always liked KU but never felt I could do that (play at KU), until my coach said it was a very real possibility.”

Coach Kurt Keener, Lightfoot’s high school coach, knew a couple of the coaches at KU and invited them out to Arizona to watch Lightfoot play. The coaches loved what they saw enough to invite Lightfoot on an official tour.

Lightfoot visited the Lawrence campus in September of last year, a couple weeks before Boot Camp. On the official tour, Lightfoot was accompanied by his parents, but while they were in the Lawrence area, they were joined by 15 or more relatives. 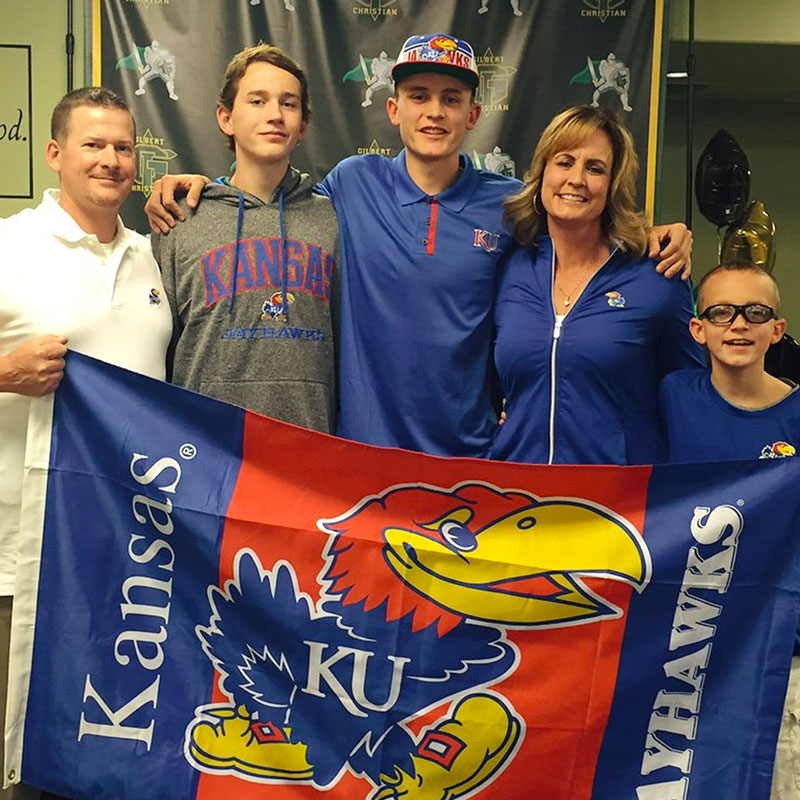 “The rest of my family, the most I had ever even seen, met up with us around that time,” said Lightfoot, with a smile. “We roll deep.”

When it came to the selling points of Kansas, Lightfoot felt that it really sold itself.

“There’s not much selling to do for KU,” Lightfoot said. “I think the traditions speak for themselves. Obviously, the guys I play with and curriculum I’m learning are great, but my favorite things about this place have got to be the coaching staff and the fans.”

Lightfoot likes a challenge, so playing under Kansas head coach Bill Self has been a treat.

“I like a coach who is going to push you rather than sugarcoat everything,” said Lightfoot. “Coach Self is an amazing coach; I am definitely challenged by him and I like that.”

Not only does Lightfoot like a good challenge, but he’s been tackling them in a successful way according to head coach Bill Self.

“Mitch has been great,” said Self. “It hasn’t translated to the in-game performance yet, but he’s learning. He tries so hard and he’s tough.” 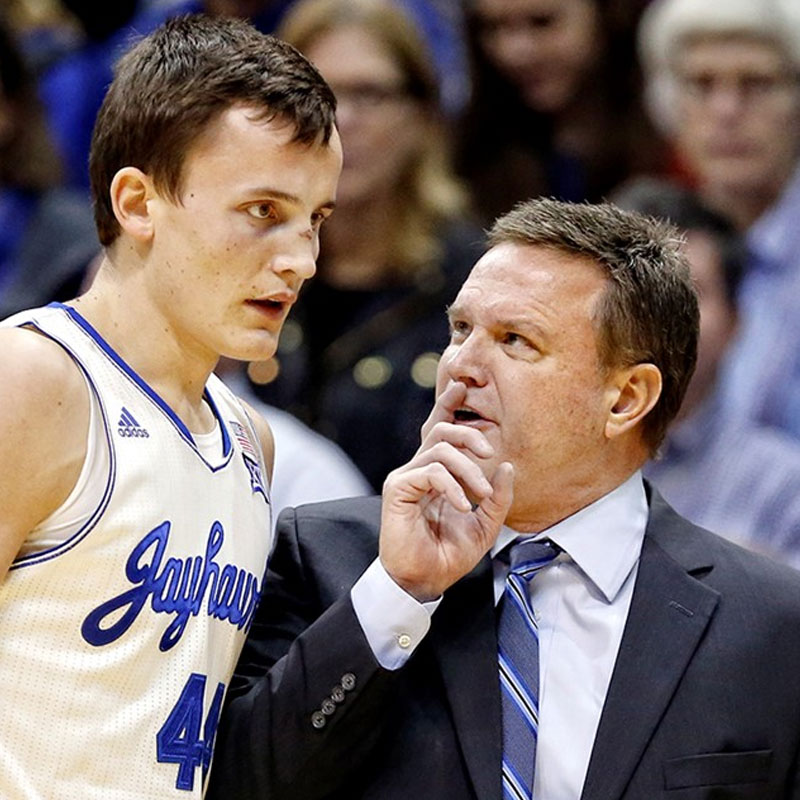 Self also commented on Lightfoot’s athletic ability and compared him to past players like Travis Releford and Kevin Young in the ways that he has plenty to learn, but with the right determination and effort, his skills will develop immensely.

“He’s got to pay his dues,” said Self. “But once he’s presented with the right opportunities I think he’s going to be a great player for us.”

The transition from high school basketball to ball at the collegiate level has been an adjustment, but in the ways that it will only make players tougher, smarter and better. Lightfoot said that you really have to hit the ground running and that you’ve got to pick it up quickly along the way.

“That’s my biggest thing, I’ve got to pick up on all the defenses, offenses and things like that,” Lightfoot said. “The pace is so different, but I’m learning.”

While taking the learning curve for basketball in stride, school has come naturally to Lightfoot and he said that he’s handling it and playing basketball at the same time well. He is a finance major with a focus in international business, which is slightly different than his original intentions of pursuing a degree in petroleum engineering.

“They walked me away from that, rightfully so, because juggling a monster of a major like that and playing basketball could get pretty intense,” Lightfoot said. “But I’m happy with where things are at.”

The adjustment both on and off the court has been nothing shy of awesome for Lightfoot. Over the summer was where it really all began.

“I got to meet all of the guys before things got real basketball heavy,” Lightfoot said. “Being here during that time made me fall in love with the university even more. Everyone here is one big family.”

Now that the season has started, the biggest thing Lightfoot wishes to gain this year is experience.

“I want to learn from everyone,” said Lightfoot. “I’m learning most from Carlton (Bragg Jr.) right now. He’s only a year older than me, but in that year he’s learned so much. I’m just trying to be a sponge so I can do the same.”

Sophomore forward Bragg said that he enjoys acting as a role model for the underclassmen because he’s able to help them, but also himself.

“I try to push them every day to try to make them better,” Bragg said. “They don’t know what they’re doing yet and that gives me an opportunity to teach.”

Bragg also highlights how Lightfoot specifically has helped him improve as a player.

“He’s really aggressive,” Bragg said. “Practicing with him makes me better on the contact aspect of my game.”

Bragg points out the major attributes that Lightfoot brings to the team. One of those include that they share the same positive energy on the team. Bragg said that besides himself, Lightfoot is the first one up off the bench to cheer on and support his teammates.

“He’s a good teammate, but also a really athletic player,” Bragg said. “He adds another tough guy to the roster. He doesn’t fully know what he is doing yet, but come January he’ll really start to understand the game and that will help us.” 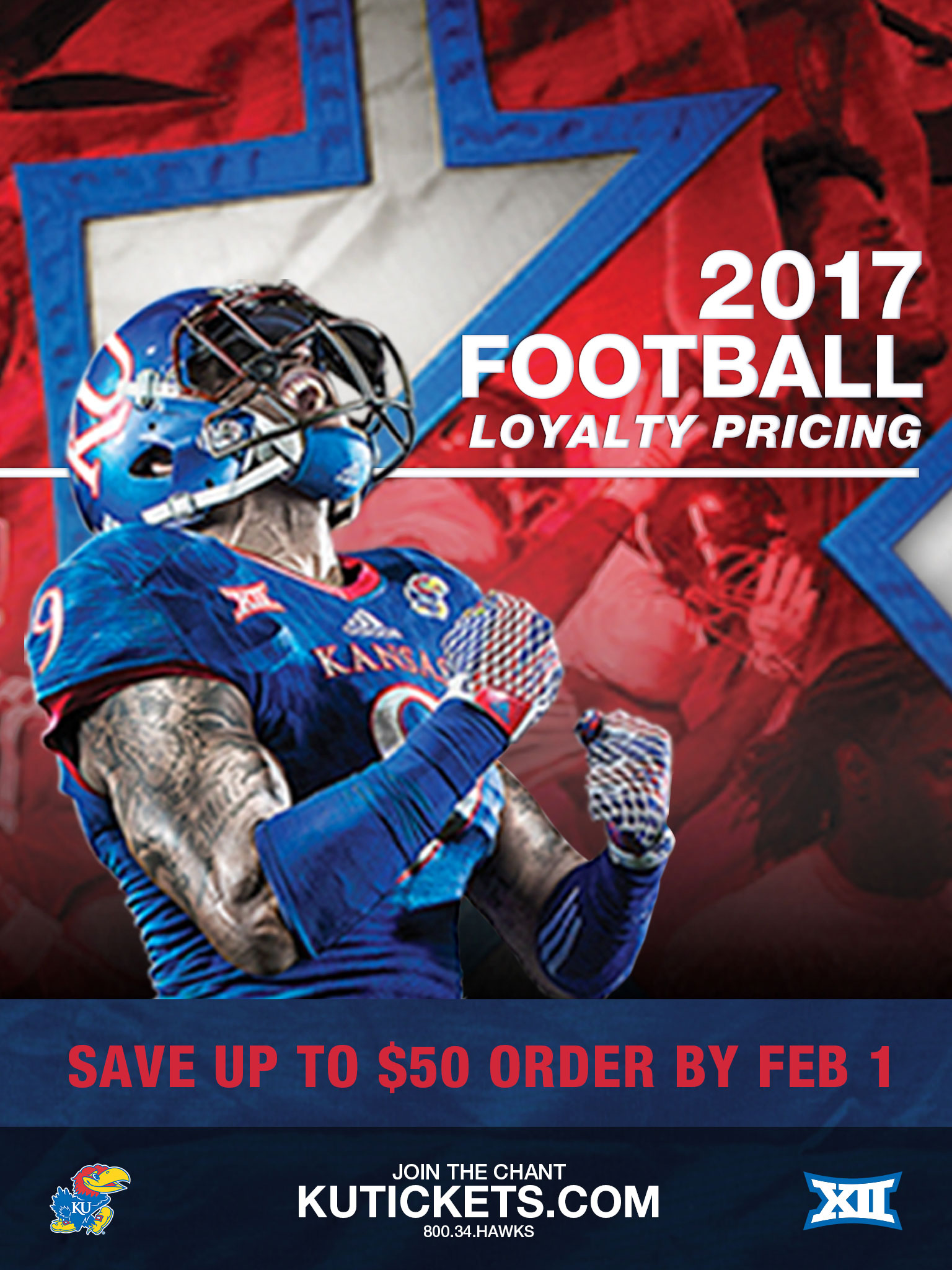 Lightfoot believes all the upperclassmen are great role models for him and that there is a lot to learn from them, as is from everyone else on the team.

Another one of those upperclassmen, senior center Landen Lucas, highlighted that mindset as a key to a successful career for a young collegiate athlete.

“How willing they are to learn, how well they listen and know that they don’t know it all will help them get better faster,” said Lucas.

With the right mindset, Lightfoot should make tremendous progress throughout his first collegiate season. Reminiscing on his first appearance in front of the Allen Fieldhouse crowd, Lightfoot smiles at the one of a kind experience. 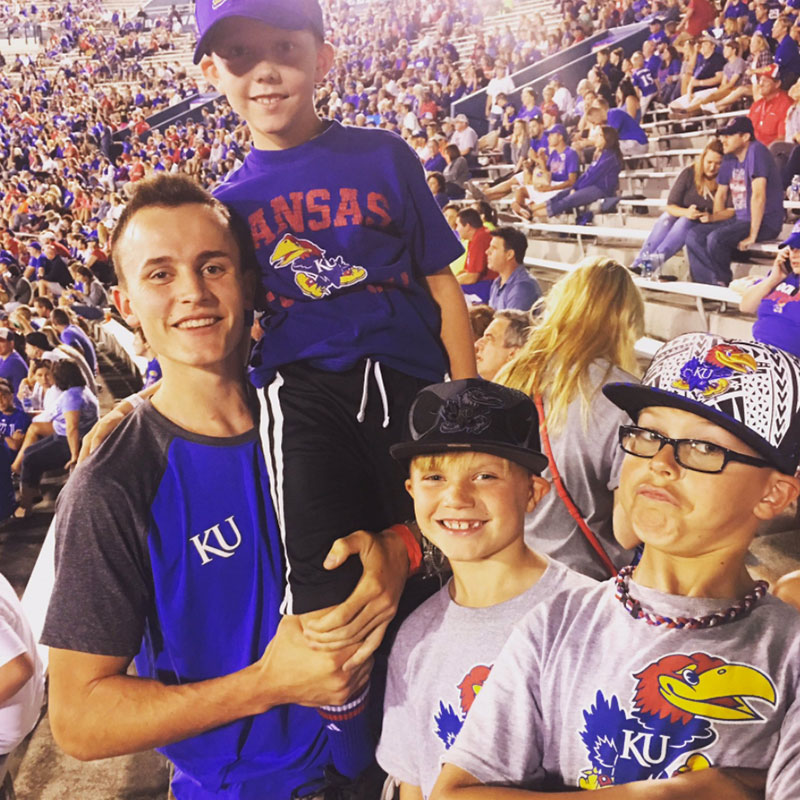 “I’d like to say I wasn’t nervous, but stepping out in front of 16,300 people for the first time, that’s pretty crazy.” Lightfoot said. “Late Night did a good job preparing me for that, but it was an experience I will never forget.”

Next week, the Jayhawks will walk onto the court of the Fieldhouse again in their battle against UMKC. This particular game should bring in some more of the Lightfoot clan, many of whom were there on his first visit to the historic venue.

“My grandparents have come to every game so far,” said Lightfoot. “My mom came out to New York with us, both sets of grandparents and my uncle came to Hawaii and my family plans to drive out to various games across the country.”

With that kind of support from his family, it is obvious that Mitch isn’t the only Lightfoot with the “go big or go home” mentality.