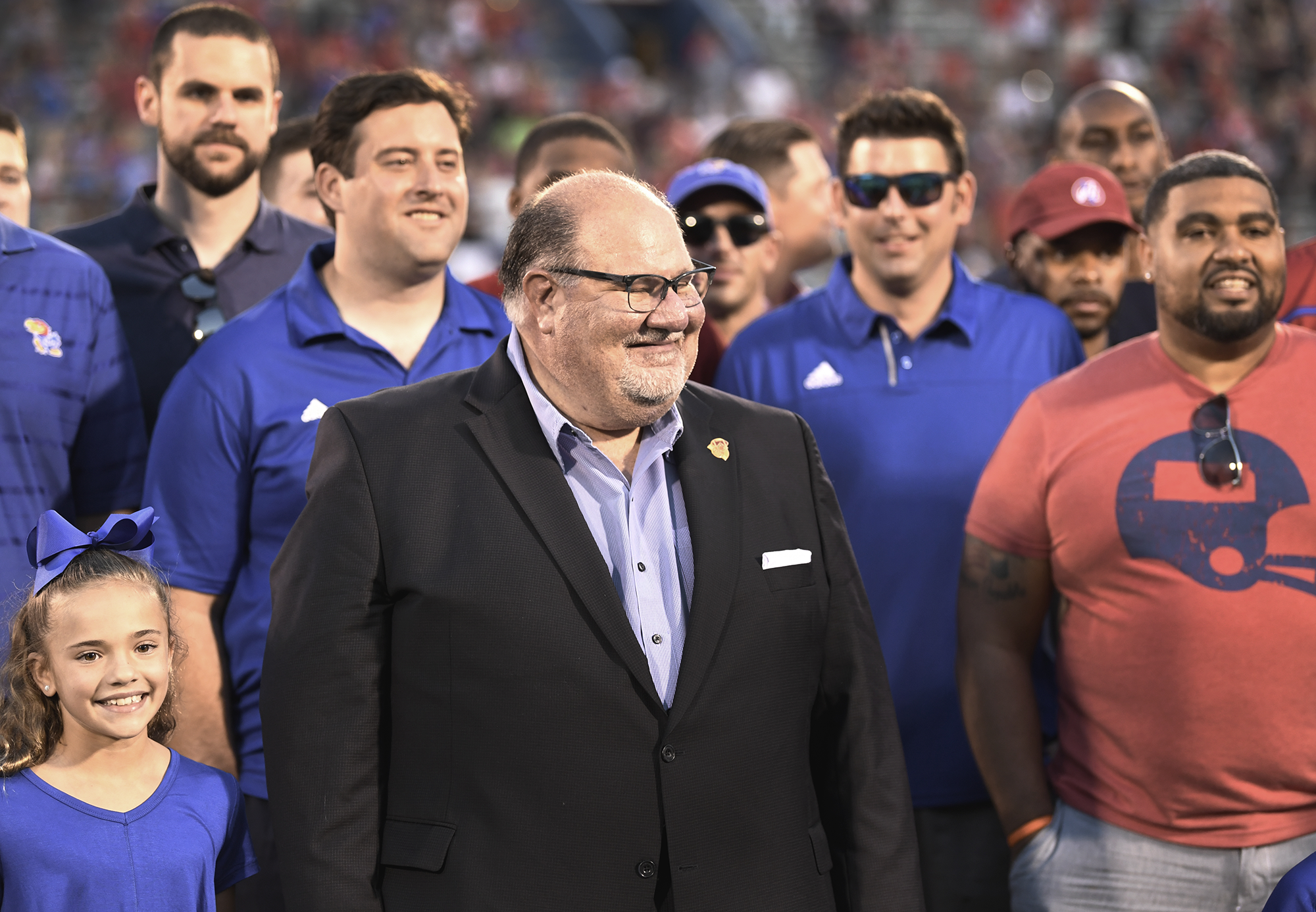 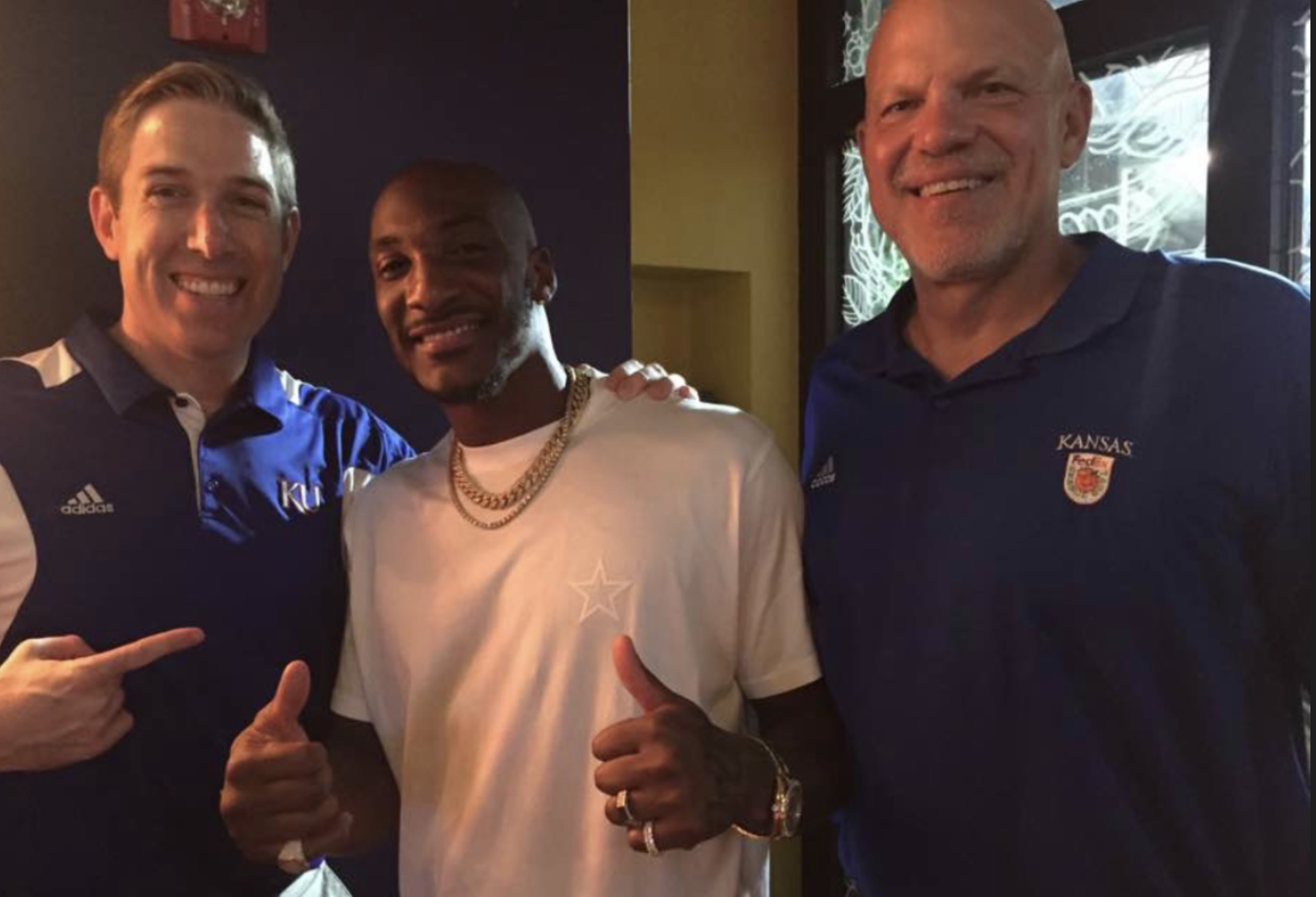 What better way to kick off a season of great anticipation than to bring back the team that set the bar for all KU football squads, the 2008 Orange Bowl Champions. Last weekend’s Orange Bowl team reunion and Hall of Fame induction gave Kansas fans the chance to reminisce on the program’s finest hour and offered the present-day Jayhawks an opportunity to rub elbows with the greatness they strive to match each day.

That magical 2007 season that featured 12 wins including a 24-21 upset of No. 3 Virginia Tech, also produced some of KU football’s brightest modern-day stars and biggest personalities – none bigger than Orange Bowl MVP, Aqib Talib. While I thoroughly enjoyed catching up with all the Jayhawks who came back – a number that swelled to a remarkable 75 by Saturday night according to Senior Director of K Club and Traditions, Candace Dunback – I found watching the weekend through the eyes of Talib to be most fascinating of all.

Talib’s first task upon arriving in town was to speak to the current Jayhawks on Friday afternoon. Coach David Beaty called Talib’s message to the team “outstanding and inspiring” and was particularly impressed by Talib focusing his pep talk on the mental side of the game.

“He told our guys, ‘I’m not going to lecture you on hard work because you’re already doing all the hard stuff that we did. We know you’re doing that. What I am telling you is, you need to be smart. You need to play smart in order to make all that hard work come to fruition. The smart team usually wins.'”

“It was interesting to hear a guy come in and talk about that other part of the game,” said Beaty. “Aqib did a really nice job for us.”

Talib’s words carried great weight with the current Jayhawks, thanks to a resume that includes four Pro Bowls and winning Super Bowl 50 with the Denver Broncos.

From there, Talib was off to join his teammates for what many described as the highlight of the weekend, Friday night’s private party for the Orange Bowl Champions in downtown Lawrence. Not everyone who made it back for Saturday’s game was out on Friday, but those who were – including Coach Mark Mangino — enjoyed a fun night reliving all the big moments of that incredible season while catching up on what had transpired in their personal lives ever since.

While a season-long highlight reel played in the background, this special group of Jayhawks – now mostly in their early-30’s – introduced their wives, showed pictures of their kids and talked about their latest endeavors in life after Kansas football.

Some Jayhawks have used their last 10 years to thrive in their new careers outside of football, like kicker Scott Webb who is now a trust officer for Midwest Trust in Kansas City. Recently married punter Kyle Tucker is currently a producer for NorthMarq Capital, dealing in commercial mortgage banking. He and his wife, Rachel, love living in nearby Fairway, Kansas, where he can keep a close eye on his Jayhawks.

Running back Brandon McAnderson, who was briefly with the St. Louis Rams, now works as a Senior Claims Adjuster at Chubb in Overland Park. He and his wife, Alex, proudly talked about their two little boys, Cruz and “Little B-Mac”, Brandon Jr.

Others, like Derek Fine, played a tad longer in the NFL (two seasons with the Buffalo Bills) but has since moved into the insurance and bonds business in Tulsa, Oklahoma, where he raises a family of his own with his wife, Lindsey.

Then there were Jayhawks on hand who have been playing football professionally in other leagues since their days donning the Crimson and Blue.  Receiver Marcus Henry shared his stories of CFL (Canadian Football League) success, while defensive tackle James McClinton talked about recently retiring after a long career playing arena football. Both smiled broadly while describing their chances to extend their careers, but their faces lit up the most when rehashing those glory days at Kansas.

At the center of it all though, was Talib, who even had his own camera crew there capturing his interactions with all his former teammates. The production crew is assembling a small film highlighting the weekend that Talib will release soon on social media.

As Talib bounced from group to group and one conversation to the next, the cameras followed and without fail, captured one witty line after another. The star corner’s boisterous laugh filled the room and that infectious personality had everyone circling wanting to catch up with No. 3 and perhaps get a selfie with the now-KU Hall of Famer.

Talib made sure to shake every hand, including those of the new broadcast crew and even did a little play-by-play for David Lawrence and me to critique. In his signature fast-paced and higher-pitched delivery, Talib belted out, “He’s at the 50, the 40, the 20, the 10… that’s how y’all do it, right?,” Talib asked with that classic laugh.

Sure, he’d left out the 30-yard line but just like his famous pick-six in Miami, perhaps Talib was just making room for some high stepping en route to the end zone.

Life after Kansas has been mostly sweet for KU’s first NFL First-Round pick since Dana Stubblefield in 1993. Whether it was picking off Aaron Rodgers as a second-year pro with the Buccaneers, sharpening his skills under Bill Belichick as a Patriot or his present-day role as a perennial Pro Bowler in Denver, Talib’s NFL success has made him a household name nationally and could one day – should his success continue — vault him into a whole other Hall of Fame discussion.

While he’s only halfway to “Prime Time’s” number of Super Bowls and Pro Bowls, the lock-down corner who proudly boasted, “I feel like Deion!” after sealing Orange Bowl MVP honors, is inching closer to Sanders’ legacy.

Only time will tell if Talib joins Sanders in Canton, Ohio, the site of the Pro Football Hall of Fame, but last weekend certainly showed how much this first Hall of Fame distinction and specifically, KU’s elite “Ring of Honor” means to Talib. More evident than anything though, was Talib’s love for the University that served as a springboard to his fast-ascending career and the brotherhood of Jayhawks who helped him go from a two-star recruit with a name no one could pronounce, to a two-time All-Pro Bowler whose moniker everyone knows.

Talib joked that his only regret of the weekend was that he couldn’t get his name put right next to Gale Sayers in the Ring of Honor. It’s now mentioned in the same sentence as the “Kansas Comet” though and that’s something that’s not lost on Talib.

“I love this place,” explained Talib. “All this means so much.”

Talib and his 2007 teammates mean just as much to the Jayhawk faithful who gave them a standing ovation at halftime on Saturday in Memorial Stadium. Just like that legendary team and improbable season, it was a truly incredible weekend.