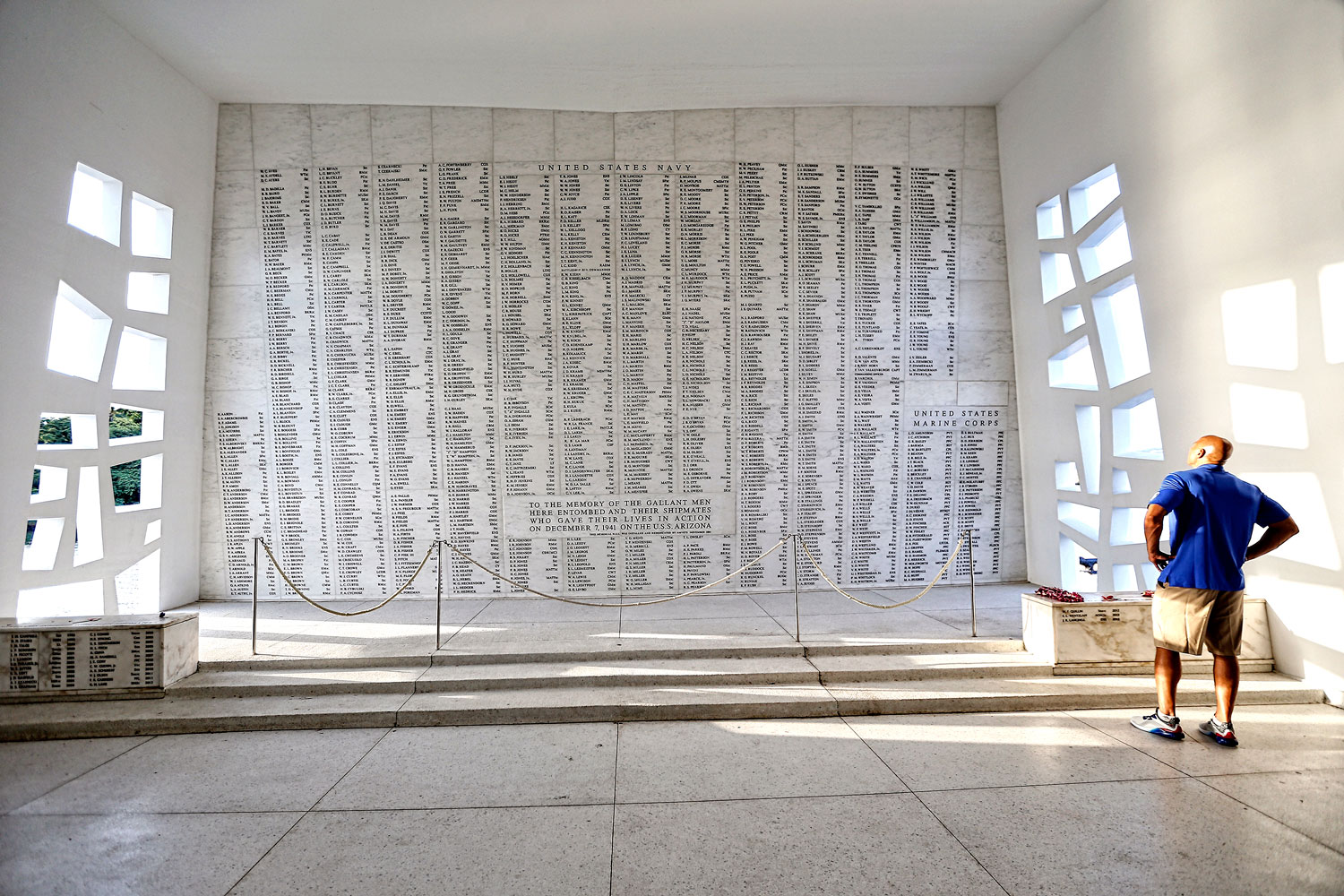 The Shrine – Fred Quartlebaum, the Director of Student-Athlete Development for KU men’s basketball, stood alone in The Shrine, where the names of the men that died while serving on the USS Arizona when it was sunk on December 7, 1942, during the Japanese attack on Pearl Harbor, Hawaii, are inscribed. Having served as an assistant coach at Navy from 1992-96, the solemn setting in the Memorial that sits on top of the sunken battleship, took on special meaning during the team’s visit to Pearl Harbor on Wednesday, November 9. 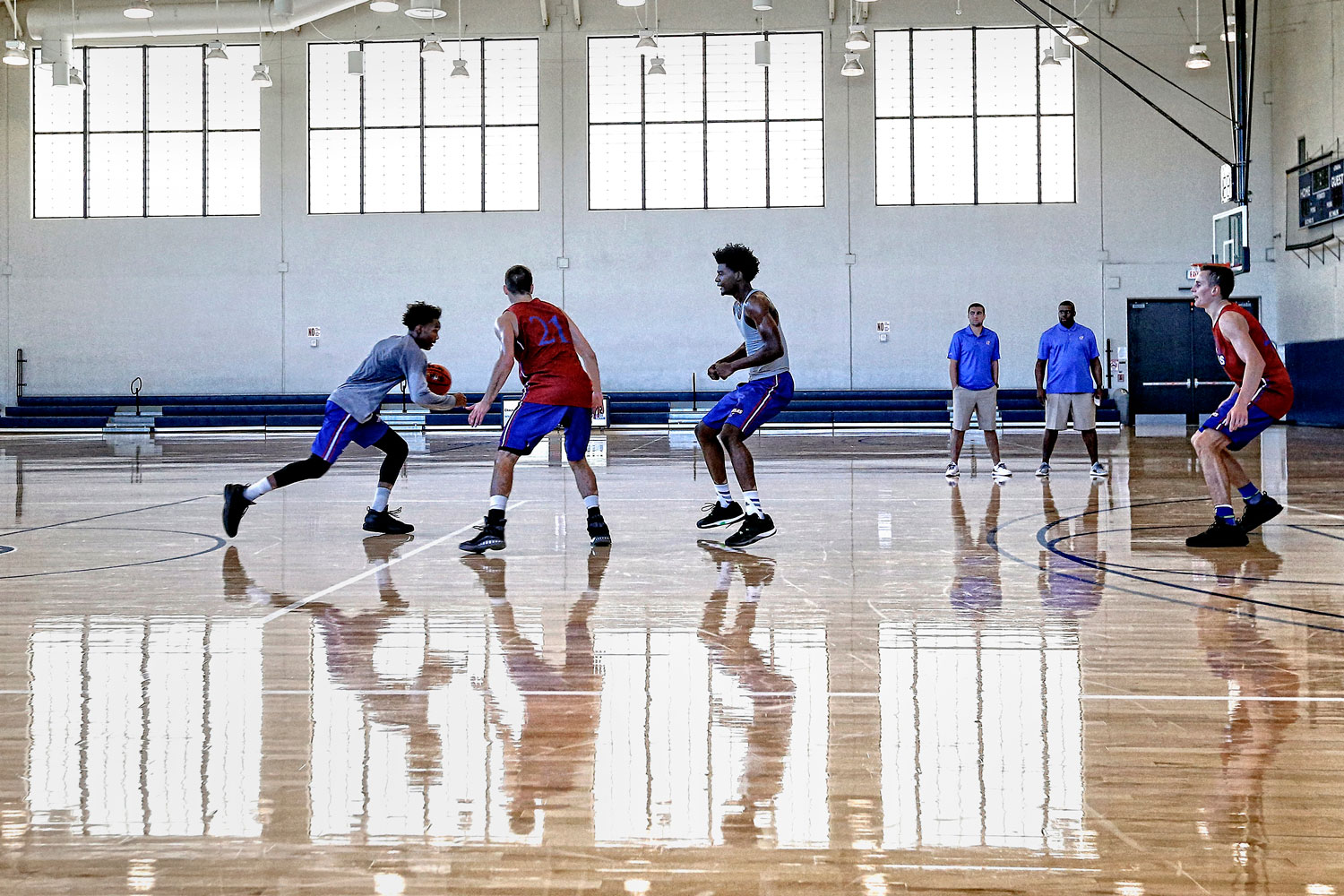 Practice Pearl – Junior guard Devonte’ Graham made a move on junior Clay Young as freshman Josh Jackson set a pick, leaving only freshman Mitch Lightfoot to defend Graham during KU’s practice at the Joint Base Pearl Harbor-Hickam Fitness Center on Wednesday, November 9, two days before KU played Indiana in the Armed Forces Classic at the University of Hawaii in Honolulu. 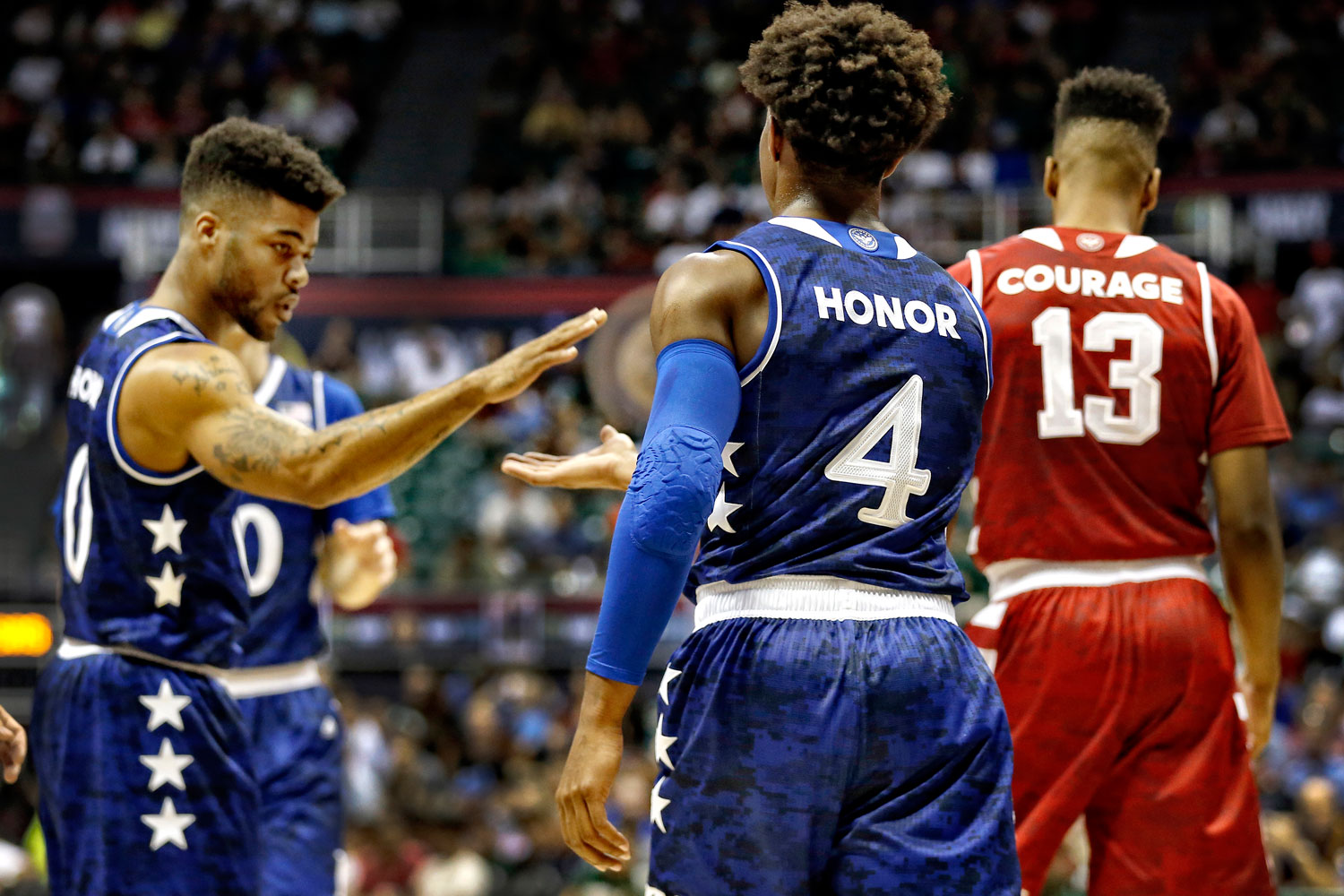 Honor and Courage – Senior Frank Mason III reached out to give a high-five to fellow guard, junior Devonte’ Graham, during the game against Indiana at the University of Hawaii in Honolulu on Friday, November 11. Both teams wore special Veterans’ Day uniforms in the Armed Forces Classic matchup that featured two teams that showed their own honor and courage in the hard-fought overtime battle. 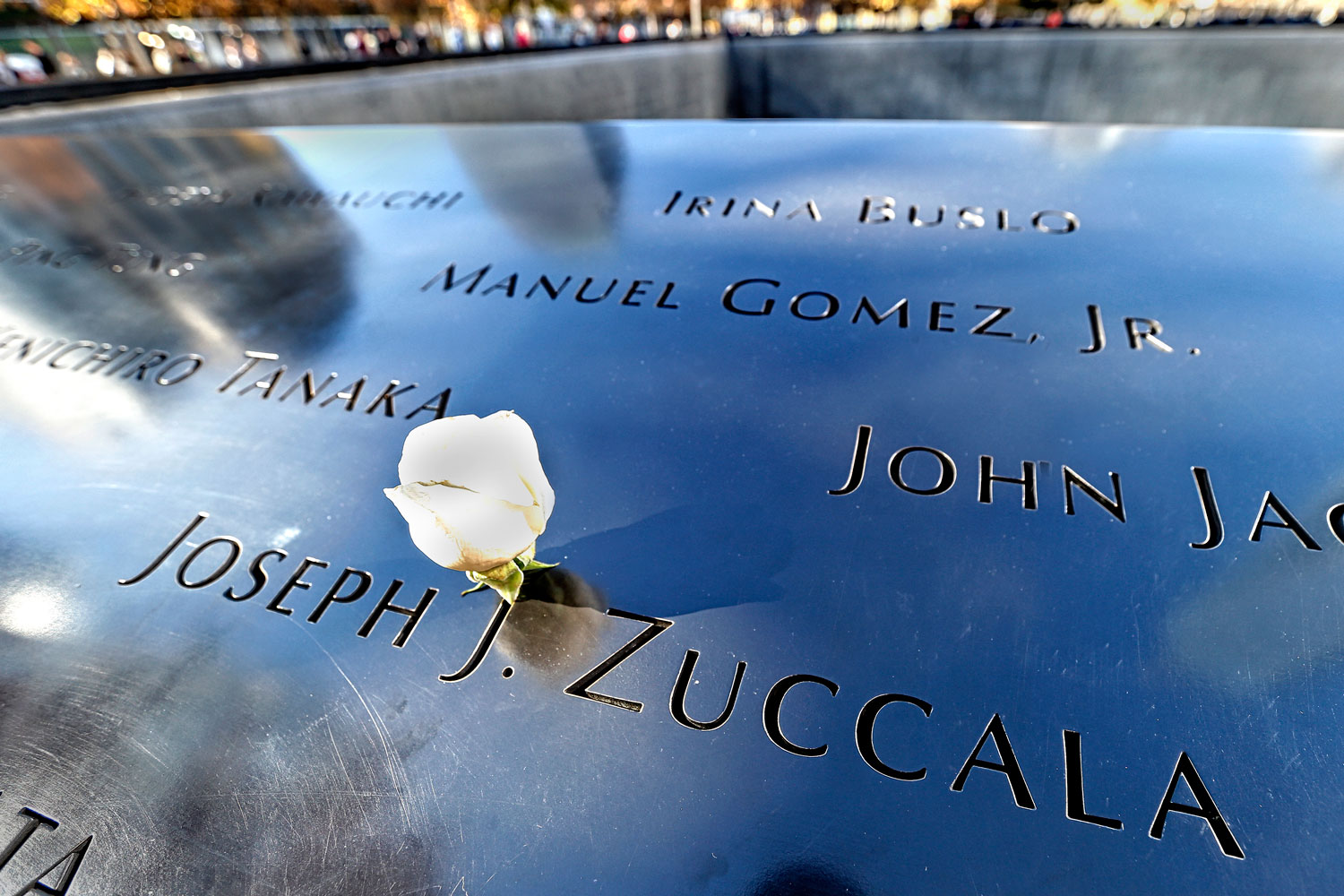 Not Just A Name – “Joe Zuccala left a big void when he died, and not just because he was 6-5 and weighed about 275. Mr. Zuccala, 54, a banking consultant who was at Fuji Bank in the South Tower on September 11, 2001, was, as his pal Tim Horgan put it, ‘everybody’s best friend.'” That is how Zuccala was described in his obituary in the New York Times over 15 years ago. On his birthday on Sunday, November 13, a white rose was placed in his etched name on the bronze parapets that edge the reflecting pool set in the footprint of the South Tower at the 9/11 Memorial in New York City. The names of every person who died in the 2001 and 1993 attacks on the twin World Trade Center towers are inscribed into the panels, and a rose is placed in each person’s name on their birthday. 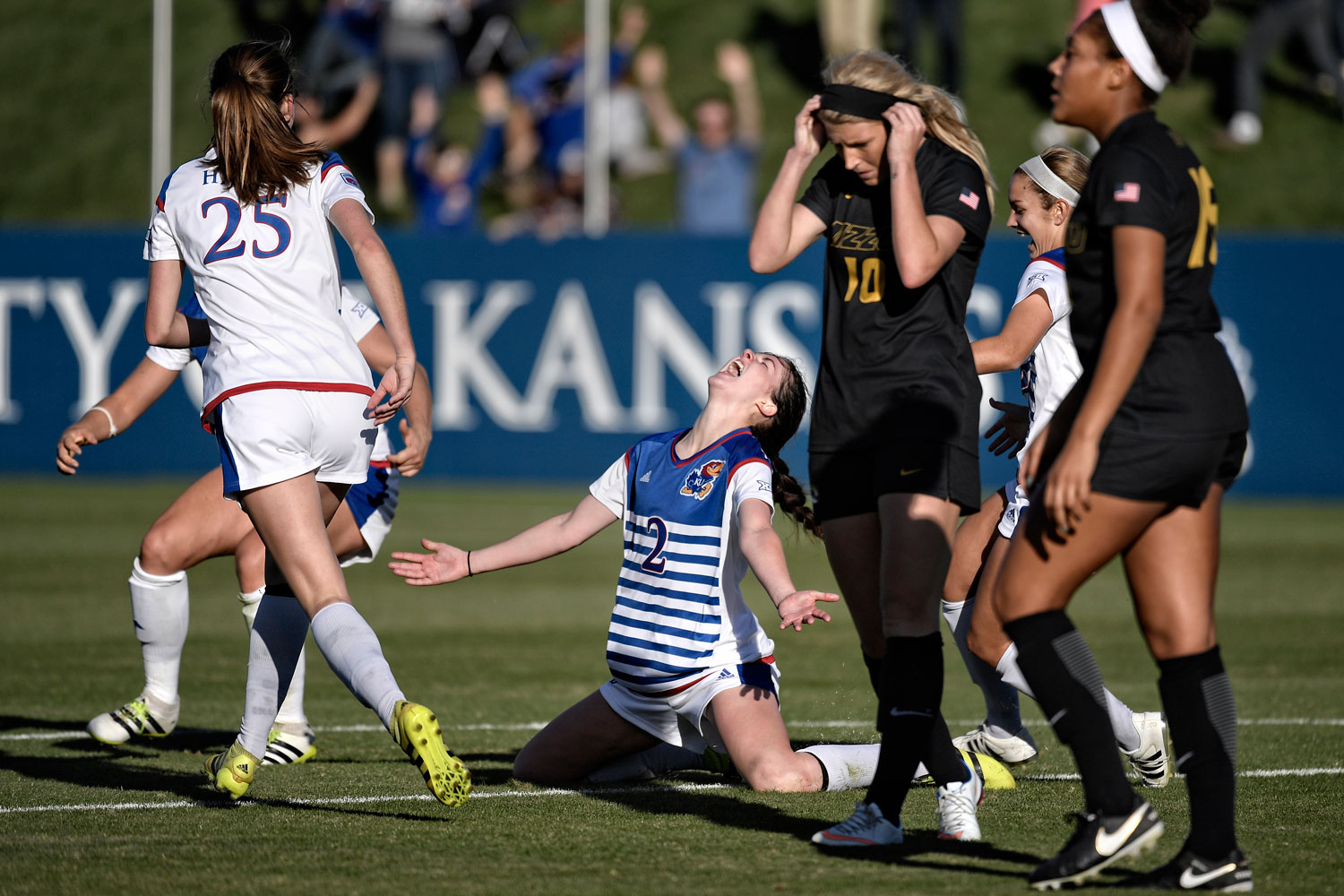 A Glorious Moment – Forty seconds into double overtime, Kansas junior Lois Heuchan kicked the Jayhawks past rival Missouri in a thrilling finish at Rock Chalk Park on Sunday, November 13. Heuchan’s golden goal in the 101st minute gave her team a 1-0 win over the Tigers and advanced Kansas to the second round of the NCAA Tournament against North Carolina on Friday, November 18. 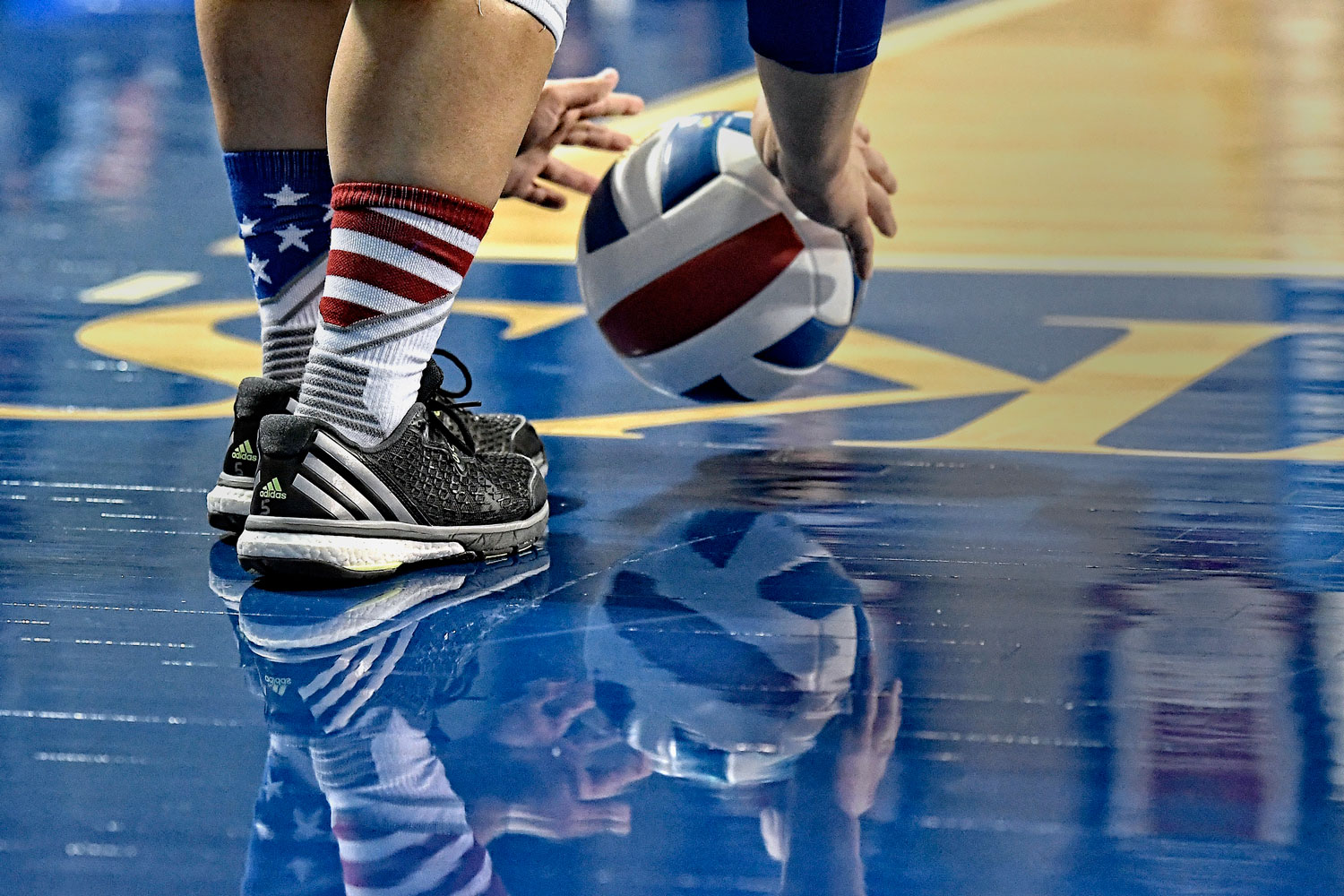 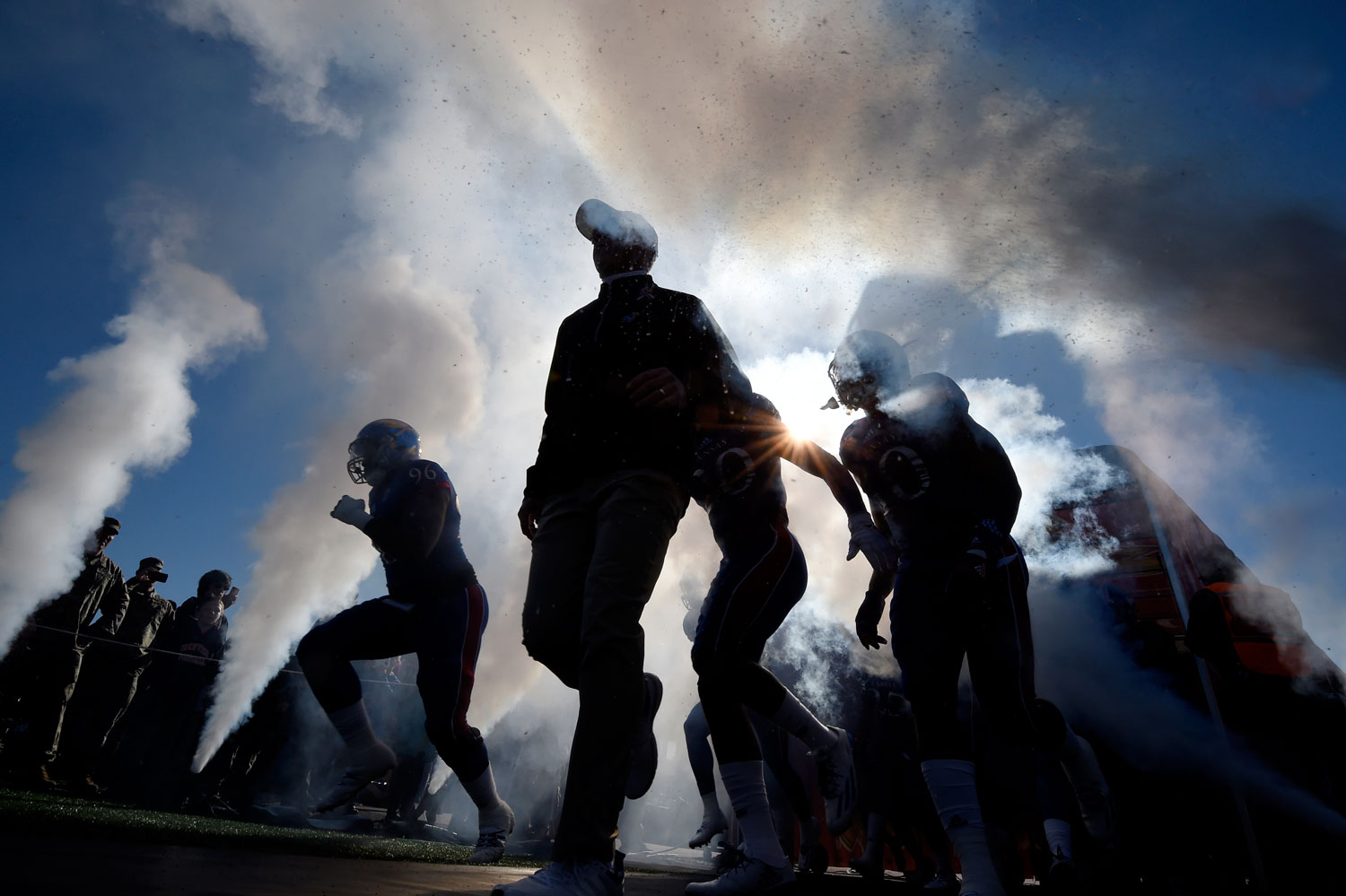 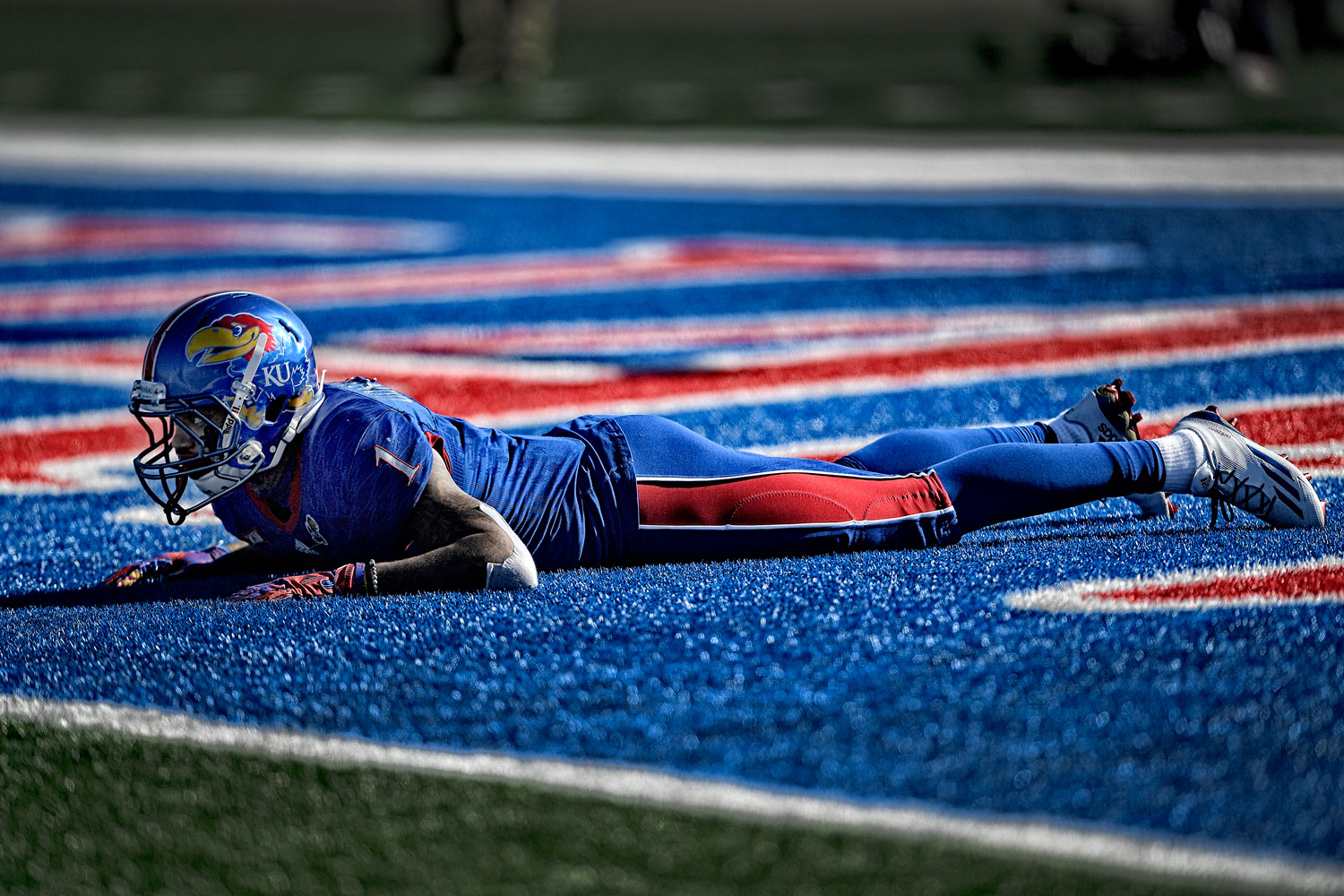 Out of Sight, Out of Mind – That is what KU football hoped for on Saturday, November 12, when on a kickoff the Jayhawks had junior LaQuvionte Gonzalez lay down in the end zone against Iowa State. Sophomore Steven Sims, Jr., advanced the kickoff five yards before throwing a lateral across the field to Gonzalez who gained an additional 29 yards.