When comes time for a senior in high school to decide where to spend their next four years many factors come into play, especially for student-athletes. Some want to move away, some want a great education, some want to continue a family legacy, while others the size of the school makes all the difference. For Kansas redshirt junior Jessica Washington her deciding factor was basketball.

The game that has consumed most of her time for a large majority of her life allowed Washington to spread her wings and leave the Midwest, but the opportunity to play at North Carolina only lasted two seasons before Washington found herself closer to home and where her love for the game began.

Washington grew up in Tulsa, Oklahoma, the heart of Big 12 country and watched the league greats inspire her future on the hardwood. During her senior campaign at Jenks High School, Washington took charge as she averaged 23.8 points and 7.7 rebounds, up from her 18.4 points per game average the year before.

At the conclusion of her senior season, she was named Tulsa World’s All-Met Player of the Year and ranked 14th in the 2013 recruiting class by ESPN HoopGurlz. She was also named a McDonald’s All-American, just the second in Kansas women’s basketball history. Beyond high school, Washington helped the U17 national team win gold at the world championships in 2012. Although her résumé is packed with accolades and accomplishments, Washington doesn’t give much thought to all the trophies on her shelf.

“I don’t really hold that to my name at all when I think of basketball, I just think of winning as a team,” said Washington. “It’s great and everything, but that’s high school, it would be great to be an All-American here, for Kansas.”

Washington wanted to venture outside of the Midwest and committed to the University of North Carolina. After two years, she decided to transfer to Kansas for the educational opportunities, to be closer to home and to play for KU head coach Brandon Schneider.

“I talked to a lot of different coaches and whenever I was on the phone with Coach Brandon, he sounded the most genuine,” said Washington. “I had already been through the recruiting process in high school, so I knew what I was looking for and what to look for in what the coaches were telling me. Coach Brandon did a really great job in not only communicating with me, but also speaking to my family members in the same genuine way.”

The feelings were mutual from the Kansas coaching staff on having Washington join the Jayhawks as an essential piece of the rebuilding puzzle led by Coach Schneider.

“She fits our style; how we want to play, with the tempo we want to play,” said Schneider. “Some of the best teams I’ve been a part of, we’ve had scoring point guards, which is always a threat. They weren’t just system point guards who carried the ball and made a pass and never saw the ball again. I think she just really fits what we’re looking for.”

Before Washington could make a name for herself in Lawrence, NCAA transfer rules had her sit out a year. She spent the 2015-16 season on the fringe of the team, not being able to play or travel with them.

“I wasn’t able to prove myself that year,” said Washington. “I wasn’t able to progress that year, I just had to be put on pause. So that’s all the motivation in the world. My life centers around basketball; that’s all that I really know and have known. So sitting out that year built a lot of motivation to come back the following year and prove to everybody why I made this decision to leave and transfer and start at a new program. I just want to show everybody what I’m capable of doing.”

The year wasn’t totally lost, as Washington was forced to look at the game from a different view, the sidelines. As someone who lives for basketball and has always been on the court, it was a humbling experience.

“I got to learn the game from a coaching perspective,” said Washington. “I got to play a different role on a team and that’s just being encouraging and being a good teammate. I learned a lot of things about the game from a different perspective and I think being able to take that in to a player’s mindset and keep all of those different keys in mind while I’m playing has allowed me to become a better player, become a more patient player.”

While a year off might seem like a setback for Washington’s game, the break gave her a chance to work through a nagging hip injury. Taking it easy a year gave her the opportunity to come in to her first season as a Jayhawk healthier than ever. 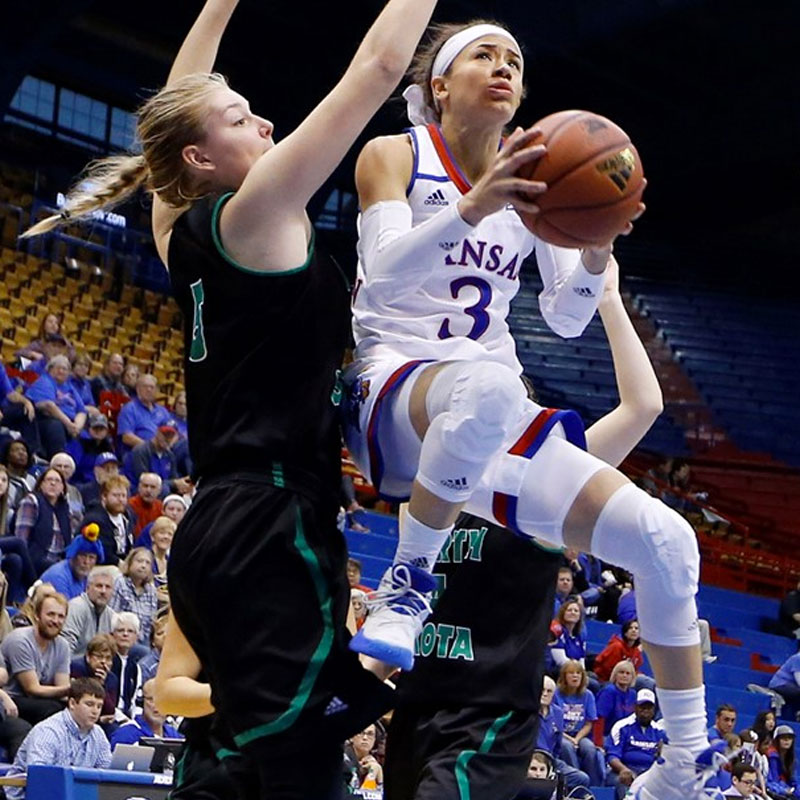 “The big thing with her that was a real benefit was we were able to get her hip fixed,” said Schneider. “I think she’s as healthy as she has been in a long time. She’s in tremendous condition.”

After the year-long wait to get back on the court, Washington started her career with the Jayhawks in a big way. Over the summer of 2016, the team traveled to Europe to play and, most importantly, bond as a team.

“This team is full of a lot of different personalities so being in Europe seeing everybody get together and have fun was a really great opportunity,” said Washington. “We weren’t just playing games, we were doing everything like touring Europe, to eating at all these different restaurants and being able to have a great time as a team.”

The team’s bond is built on Schneider’s words of “tough and together.” This means they play tough and together through every practice and every game. Washington has adopted this mentality through improving her defense since the start of the trip to Europe.

“I think any time you change programs there’s different styles of play, there’s different terminology,” said Schneider. “I think her not practicing a lot with us last year she wasn’t able to really key in on a lot of those things. Here lately, she’s taken a lot more pride in her defense.”

The road trips and finally getting play with the team are nice, but many believe the best thing about playing basketball at Kansas is that first time you walk in to Allen Fieldhouse. It’s truly a unique experience.

“Finally being able to play in Allen Fieldhouse, I cannot even express the emotions going through me at that time,” said Washington. “I was freaking out but at the same time trying to stay poised and stay cool, not let anybody see that inside I was going crazy. Allen Fieldhouse is a great place to play. ‘Great’ is an understatement because all the fans have the same love for the game that you do.”

Since Washington grew up in the heart of Big 12 country, she recognizes faces from around the conference like Alexis Jones of Baylor and Brooke McCarty of Texas. They bring back great memories of her younger days and it renews old rivalries from American Amateur Union, a high-intensity league for youth players.

“‘I’m looking forward to (playing) Baylor, Texas and Oklahoma,” said Washington. “I grew up hearing about those schools, but then I moved to the ACC and never got to play or see them.” 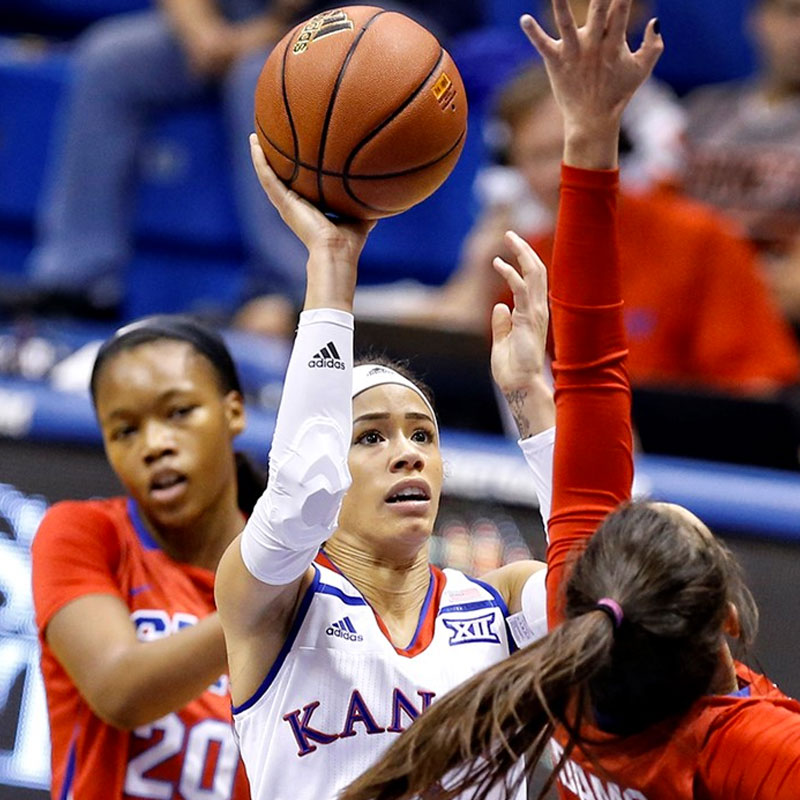 Taking on historically great programs that have produced players like Baylor’s Brittany Griner won’t be easy for the 5-foot-8 guard. Learning a new style of play wasn’t the only transition for Washington, as the Big 12 is known to be one of the toughest conferences for women’s basketball, which means physical changes for Washington.

“I’ve had to put a lot of trust in our strength and conditioning coaches, [Andrea] Hudy and Zach [Zillner], because the Big 12 is … big,” said Washington. “The girls that play in this league are huge. I’ve been trying to put on weight and some muscle to get ready for the physicality in the Big 12.”

Coming in as a decorated transfer to a huge basketball school may put more pressure on Washington’s shoulders, but she doesn’t see it that way.

That motivation from the ‘pressure’ and sitting out a season has created big goals for Washington and her first official season in the Crimson and Blue.

“I want to win the season, and not just a couple of games,” said Washington. “That’s the only thing on my mind every time I step on the court.”

Washington knows she has the support of her coaching staff, her team and her favorite, the fans, on this journey.

“I just feel at home because everybody is so happy, so excited and in the moment,” said Washington. “They’re all there for you. They are all there to watch you play, they’re there to watch you showcase your skills. They really enjoy watching you do that. I can say that I have not had one bad experience here at Kansas. Everything has been really positive from my personal life to my basketball life to the community life. Everything is really great, (there are) good vibes here.”

There’s an idea that things come full circle in life. Washington returning to the Midwest, where her basketball dreams started, seems to make an argument for that notion. Her journey now is to help lead Kansas to wins whether it’s on the road facing renewed rivals or where everyone loves the game as much as she does, her home in Lawrence.