RCW: Dancing to his own beat

In Ann Arbor, Michigan, with music blaring from the kitchen, 9-year-old Tyrone Miller Jr., dances alongside his mother, Rose Joiner. They laugh as they shimmy and shake around the living room, not a care in the world at that moment in time. 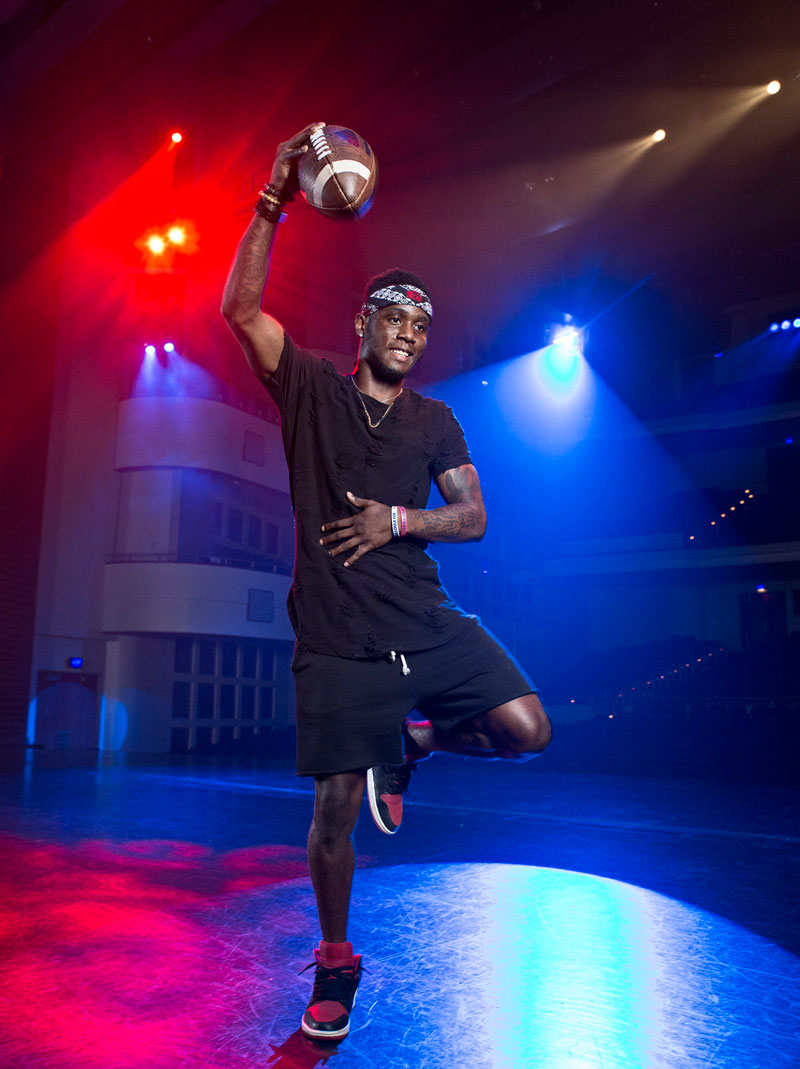 She was his inspiration behind his passion for dancing. He thought it was fun, and it was a bond he could share with his mother.

“Every time my mom would turn on the music she would be dancing all the time,” said Miller, who is entering his sophomore season with the Jayhawks. “So I would just be dancing with her.”

In high school, Joiner was part of the drill team and dancing has always been in her blood. She recalls that every time music would come on she has always felt like dancing, and her son has followed in her footsteps, or rather dance steps.

Joiner first noticed Miller dancing when he was just a year old. The first time she saw him bouncing to the beat, she laughed to herself thinking it was cute, but inside she also had a feeling her passion would become his too.

“He hasn’t stopped dancing yet,” said Joiner. “He just strives hard for everything that he does, and I really love him for that.”

While Miller has been dancing around the house since the age of one, dancing did not become a hobby he took seriously until he reached middle school. At that time, he started teaching himself how to dance more technically by watching dance videos online and following professionals like the Les Twins and the Jabbawockeez.

Because he learned from so many different people, Miller said his dancing style wasn’t one you could put a category on, but he most enjoys free styling. In order to expand their knowledge and hone their skills, Miller and his friends would try to emulate each dance they saw or heard about.

“Any type of music that would come on, that’s what type of dance we would do,” said Miller. “Even to this day, I don’t think about it before I do it, I just do it to do it. When the music comes on, I just go with whatever first comes into my mind.”

In the seventh grade Miller also began playing football, but dancing was still his first priority. In Miller’s hometown there were two brothers, Ayleo and Mateo, who were rising dance stars. The brothers had taken dance classes and were excellent performers, and from them is where Miller learned a lot of what he knows today.

Miller began recording himself dancing and posted the videos to his Facebook page and on YouTube. His videos became a hit and soon after, Ayleo and Mateo reached out to him because they thought he was a talented dancer who showed great potential. This was a huge break for Miller. The brothers came to Miller with the idea of the three of them teaming up to form a dance crew.

Miller jumped at the opportunity to dance with the dynamic duo of brothers and the three of them came up with the name Spectro Inc. The crew would dance in downtown Ann Arbor, and they quickly became a local sensation. Spectro Inc., was so popular that a pair of shoes came out with the name “Spectros.”

“Being a part of the crew was really fun going to places and people knowing who you are,” said Miller. “People would say, ‘Oh my gosh, that’s Spectro Inc.’ It was such a great feeling to know people enjoyed watching us dance because I was just doing something I loved.”

Joiner, although very proud of Miller and his crew’s popularity, had doubts about how much focus he should put on his dancing.

“He was spending a lot of time on his dancing, they were doing really well and making a name for themselves,” said Joiner. “But I was worried about what kind of future he might have. There’s just no career in dancing.”

After a couple of years of trying to balance dancing and playing sports, Miller started to realize how big of a toll all of his activities took on his body. He was sore and stiff all of the time, and it was hard for him to do some of the dance moves that had previously come easily to him. When he reached the ninth grade he told himself he needed to choose one path to focus on 100 percent.

Surprisingly, the choice came easy for Miller: football. In the end, Miller chose football over dancing because he felt football would take his future further.

“I knew I wanted to play college football, but I didn’t know how just much hard work it takes to put in it,” said Miller. “I needed to focus all of my attention on just football.” 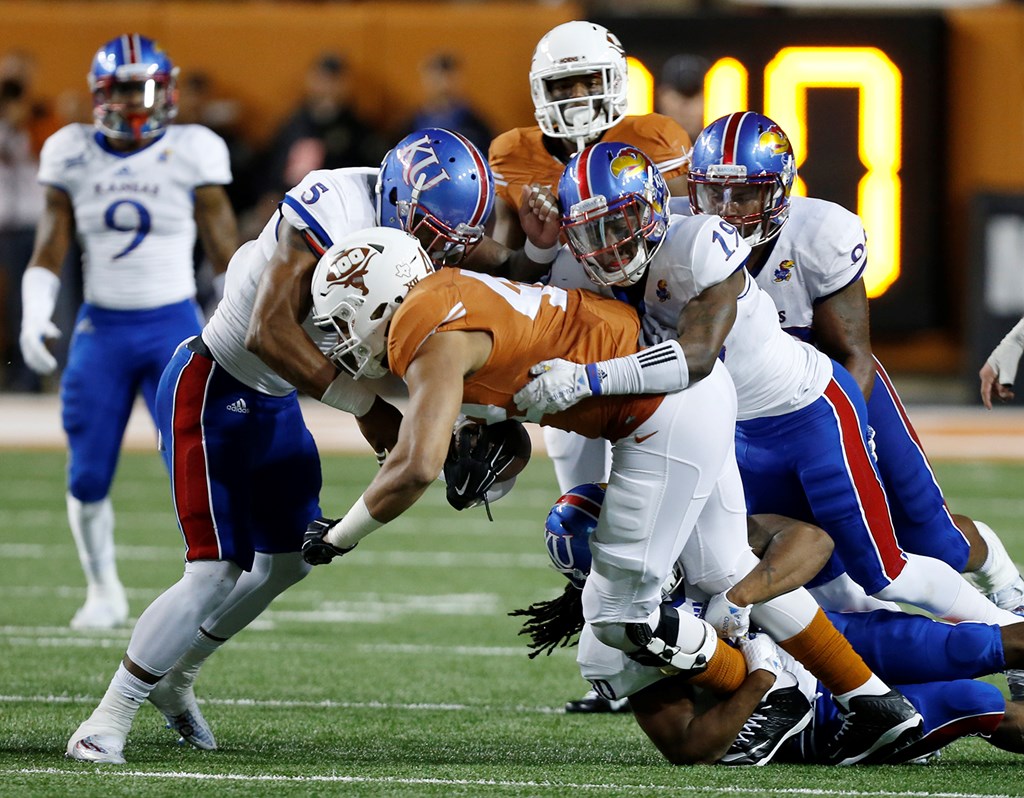 Joiner was really proud of Miller for making football his first priority and she was pleased that her son did not have any regrets making his decision.

“Everything that he does he puts his all into it,” Miller said. “There’s a time and place for everything, so he just dances when he has time.”

While his mother was very supportive of Miller choosing football, at first his fellow dance crew members couldn’t comprehend why he didn’t want to pursue dancing as a career.

“It was hard for them to understand my choice because they didn’t play football,” said Miller. “They didn’t do anything else but dance. I had two things I was passionate about and had to make the best choice for me.”

Today, Ayleo and Mateo are Instagram and YouTube famous and travel across the United States dancing. There are no hard feelings between Miller and the brothers for going their separate ways. In fact, when Miller goes home to Michigan, he still makes time to get together with the pair and they catch up on each other’s lives. Miller is proud of them and all that they have accomplished, and the brothers are equally supportive of Miller and his football career.

While Miller cut back on his dancing, he stepped up in all aspects with football. He turned all of his attention to football and spent all of his free time outside of school and at practice to perfect his skills. He spent time in the weight room and working on his footwork. He even ran on the track team to help improve his speed. Because of his dedication to his craft, he became a force for his Saline High School team, earning a spot on the Ann Arbor News Dream Team as a junior and senior. Miller parlayed his outstanding performances on the football field into earning several Division I football offers and eventually chose to become a Jayhawk.

Even though he made the choice to cut back on dancing and pursue football full-time, Miller credits his dancing with helping his football skills.

“I definitely have better balance and flexibility,” said Miller of his skills that were honed during time spent with Spectro Inc. “Playing cornerback and now safety, those tools have really come in handy for me.”

In his first year of college football, Miller played in all 12 games at cornerback for KU, including making seven starts. He was the team’s fifth-leading tackler with 56 stops and was named to Campus Insider’s Honorable Mention Freshman All-America team. Off the field, he showed dedication in the classroom as he earned a spot on the Big 12 Commissioner’s Honor Roll and Athletic Director’s Honor Roll.

I definitely have better balance and flexibility. Playing cornerback and now safety, those tools have really come in handy for me.

– Tyrone Miller Despite having a strong freshman campaign, Miller has worked tirelessly during the offseason to become bigger, faster and stronger for the upcoming season as he transitions to playing safety. Under the guidance of Kansas’ strength and conditioning staff, Miller has gained a lot of muscle. He can’t really see himself dancing on the level he used to because of his added bulk. However, just because Miller put football ahead of dancing doesn’t mean he doesn’t still have the urge to break out his moves.

Miller takes every football practice seriously and he is focused on becoming a better player every day, but when a song comes on sometimes he just can’t help himself, even if that means getting called out by defensive coordinator and safeties coach Clint Bowen.

“I wish I could say I taught him everything he knows,” joked Bowen. “He is a phenomenal dancer. I don’t always like to see his moves during practice, but there is a time and a place for everything. I know his dancing does fire up his teammates and Tyrone, as well.”

Not surprisingly, Miller has been declared the top dancer among his Jayhawk teammates. His roommate, sophomore defensive end Daniel Wise, even deems Miller a “professional.” Wise admits he likes to dance a little here and there himself, and has even tried to take some of Miller’s moves. 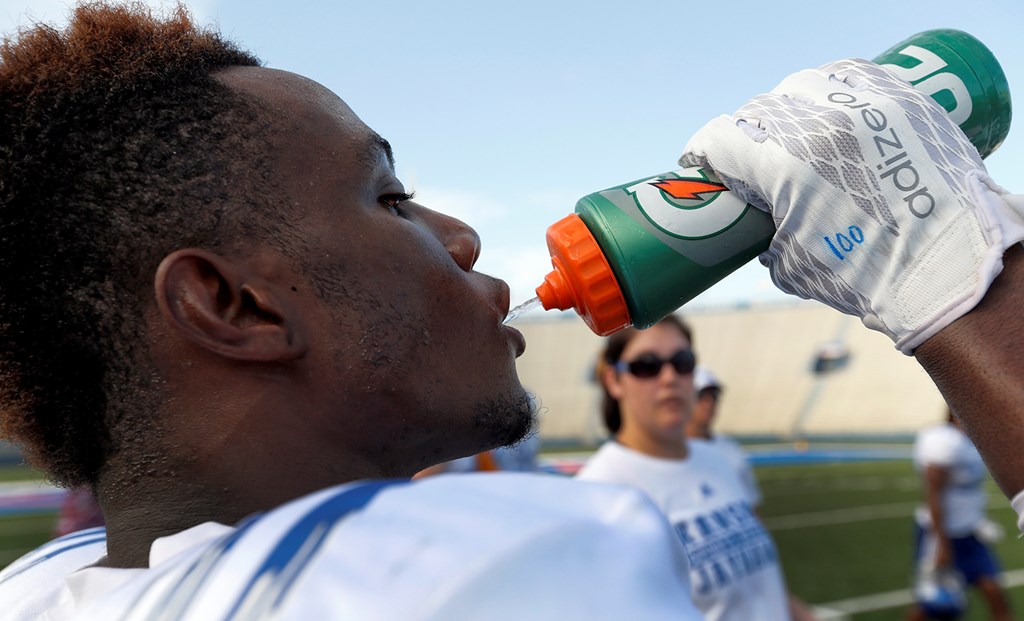 “Tyrone is obviously a very talented dancer,” said Wise. “We feed off of each other’s energy. We are both high-energy guys. I think when guys on the team see Tyrone dance it gets everybody hyped up.”

While his dance moves are often inspiring out on the football field, Miller also enjoys challenging his teammates and friends to dance-offs in his spare time. Based on the popularity of his skills, those moves now come at a high request rate by those who know Miller in order to be widely shared.

“I get asked a lot to repeat my moves for my friends who want to put them on Snapchat and other social media,” said Miller. “That is actually hard for me. I do so much freestyling that I rarely repeat the same thing. I just make it up as I go.”

While football easily trumps dancing as the preferred path to Miller’s future, dancing will forever be a part of his life.

“Even if it is to my own beat, I’m dancing, no matter what.”