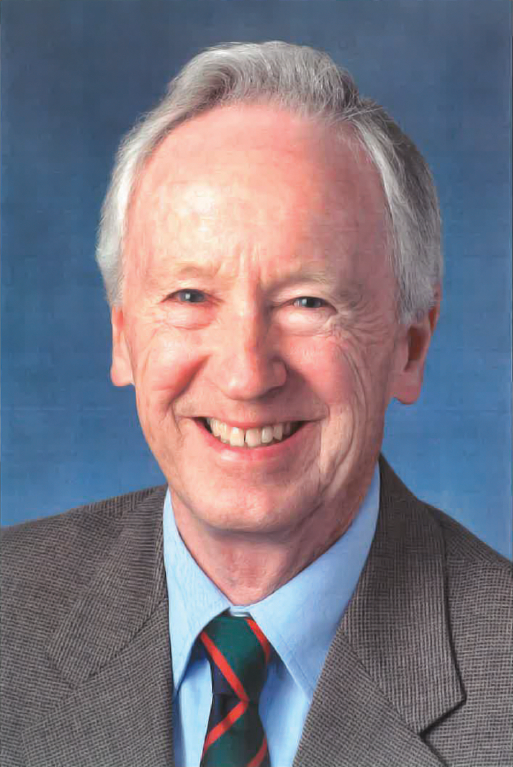 A 1950 graduate in architectural engineering from the University of Kansas, Warren Corman, of Lawrence, joined the Williams Education Fund in 2006 to help fund scholarships for all student-athletes. The Cormans are a family of Jayhawks who began with Corman’s father, Emmett, who was a 1925 KU graduate in architecture. Along with his father, Corman’s son, David, graduated in 1975 with a degree in electrical engineering while his granddaughter, Kristi Denny, was a 2000 graduate with a liberal arts degree.

One of Corman’s most memorable KU moments was when the 1989 men’s basketball team beat Kentucky in Allen Fieldhouse, 150-95. Another was when ESPN did a spotlight feature on him and his wife, Mary, in Allen Fieldhouse during the celebration of the 100th anniversary of basketball. An additional memory is when he, along with his wife, was presented with a framed “#1” jersey at halftime of a men’s basketball game for his retirement from the Chancellor’s office.  His attendance of the 2008 Orange Bowl was made even more memorable by Kansas Athletics honoring him with a personalized Orange Bowl Ring.  The ring was the same one that the KU Orange Bowl players had and he received it in regards to his commitment to the Anderson Family Football Complex, which was completed three month’s early. The final memory that he discussed was from the 2009 annual meeting of athletics, which is held in Kansas City, where he was honored with the Lifetime Service Award.

When asked about his favorite KU tradition, Warren had an interesting response, reflecting on his class of 1950.

“My class consisted mostly of World War II veterans and we were the start of one tradition and the end of another,” Corman explained.

He discussed how they removed the scaffolding around the base of the Campanile, which was not quite completed yet, and marched through it for Commencement.

As for the tradition that they ended, he stated: “(The) First day of 1946 fall classes, some KU seniors demanded that the veterans wear beanies per an old tradition for freshmen. We veterans politely responded, ‘Who’s going to make us?’ And that was the end of that tradition.”

In regards to his favorite Jayhawk student-athletes, Corman included Glenn Cunningham, who became one of the great Kansas milers to ever compete in the Crimson and Blue. Cunningham is one of life’s great success stories after he was terribly burned as a youth in a fire and was told he would never walk again. Another Kansas favorite is men’s basketball legend Danny Manning, not only for his success on the court but also for being a great person and a leader in many different ways.

When asked for any additional comments he wanted to include, ­Corman took some time to discuss his past. When he was 17 years old he enlisted in the Navy, where he served two years in South Pacific as a Seabee. He was a part of the last battle when the U.S. invaded Okinawa and was preparing to invade Japan when the atomic bombs were dropped, ending the war. In 1947 he began working for the State Architect as a private practice partner focusing on state buildings. He then spent 31 years as a chief architect and engineer for the Kansas Board of Regents before serving as University Architect and Assistant to the Chancellor at the University of Kansas for 13 years.

In 2010, at the age of 84, he retired briefly but was then hired by the Dean of Engineering to work on projects that were completed in 2015. As the last remaining architect from the team that designed Allen Fieldhouse, Corman and his wife currently reside on The Jayhawk Club golf course and are enjoying life in Lawrence.

Rock Chalk, Warren Corman, and thank you for being featured in this edition of Rock Chalk Weekly’s Donor Spotlight!