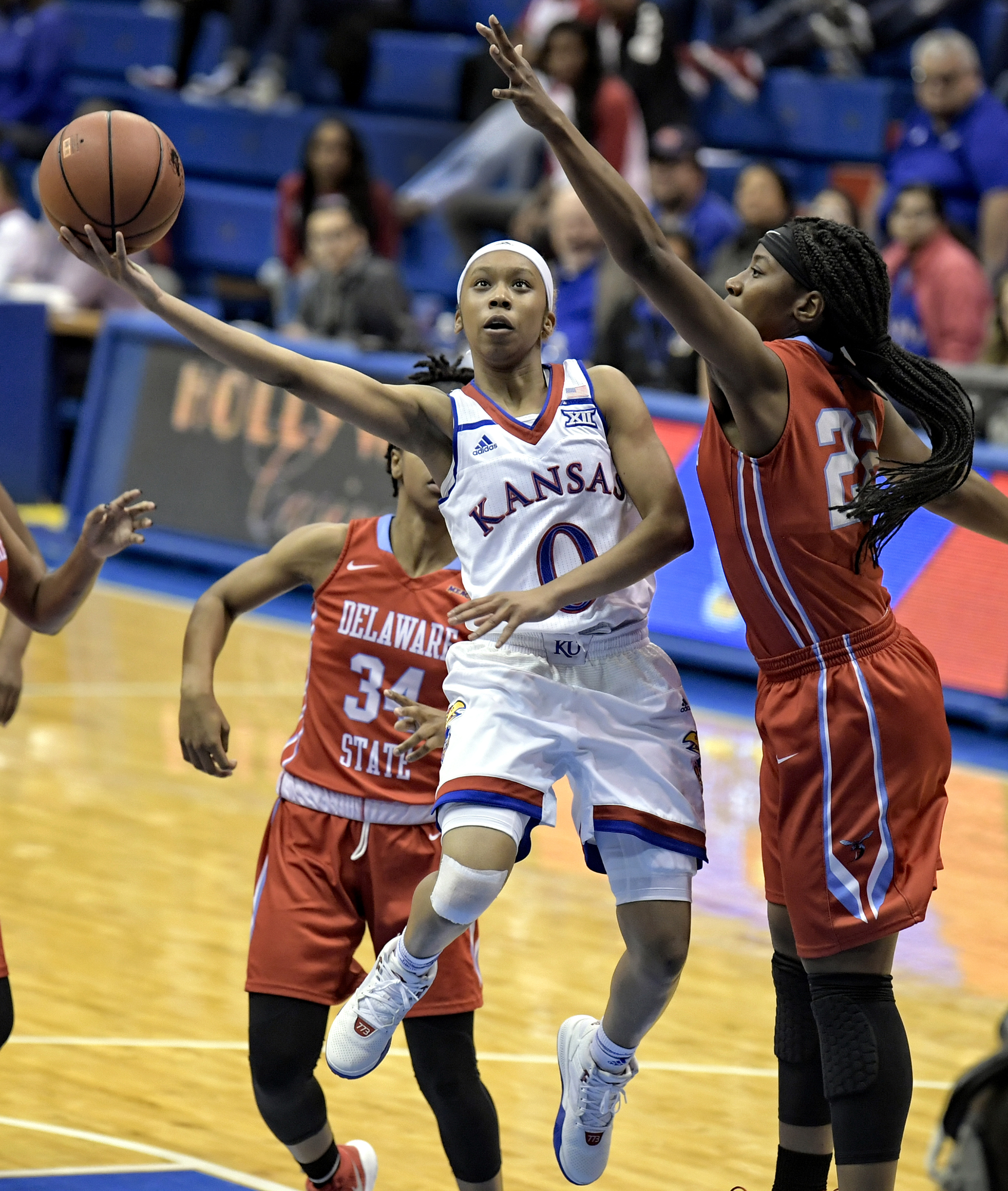 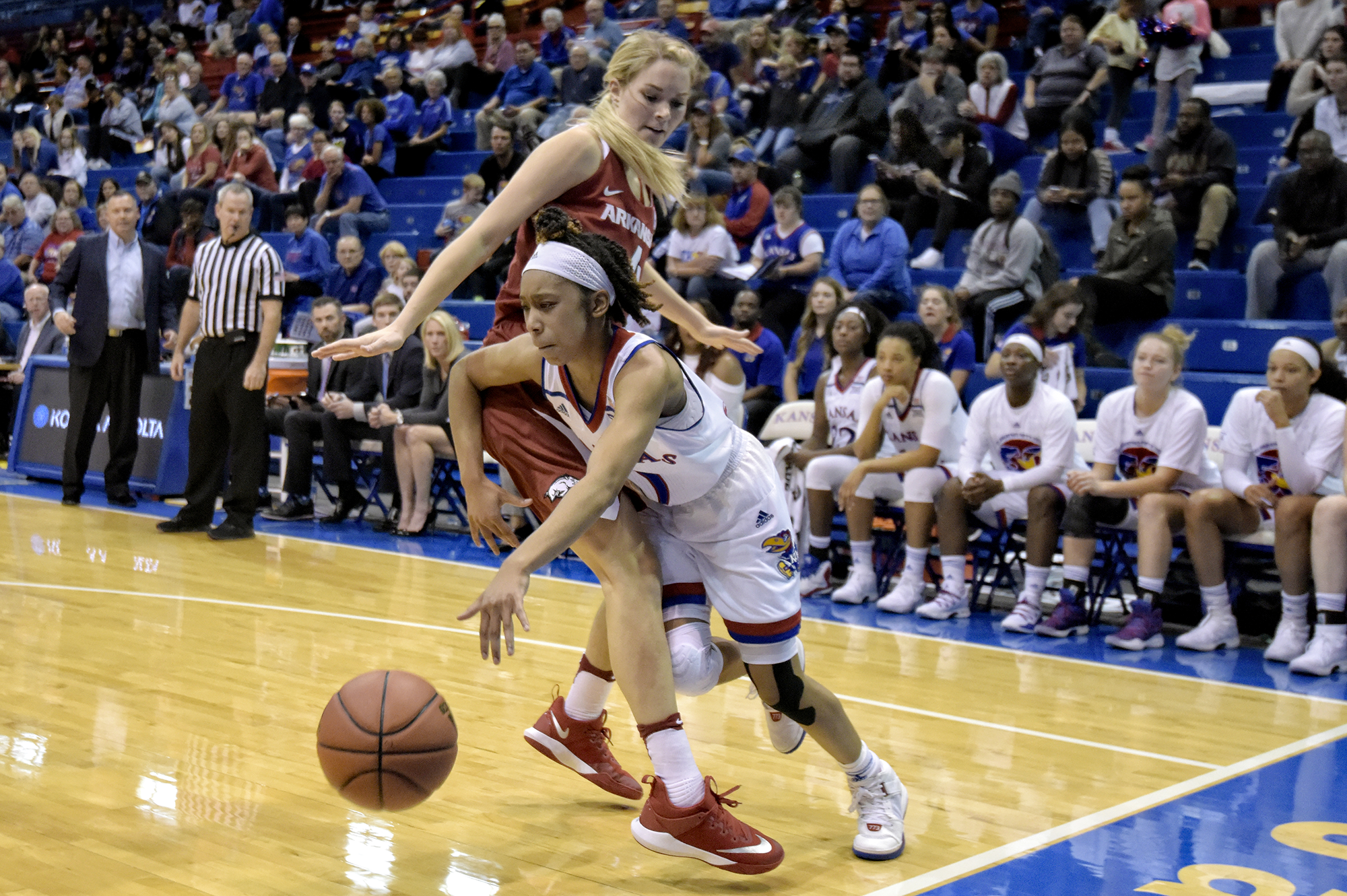 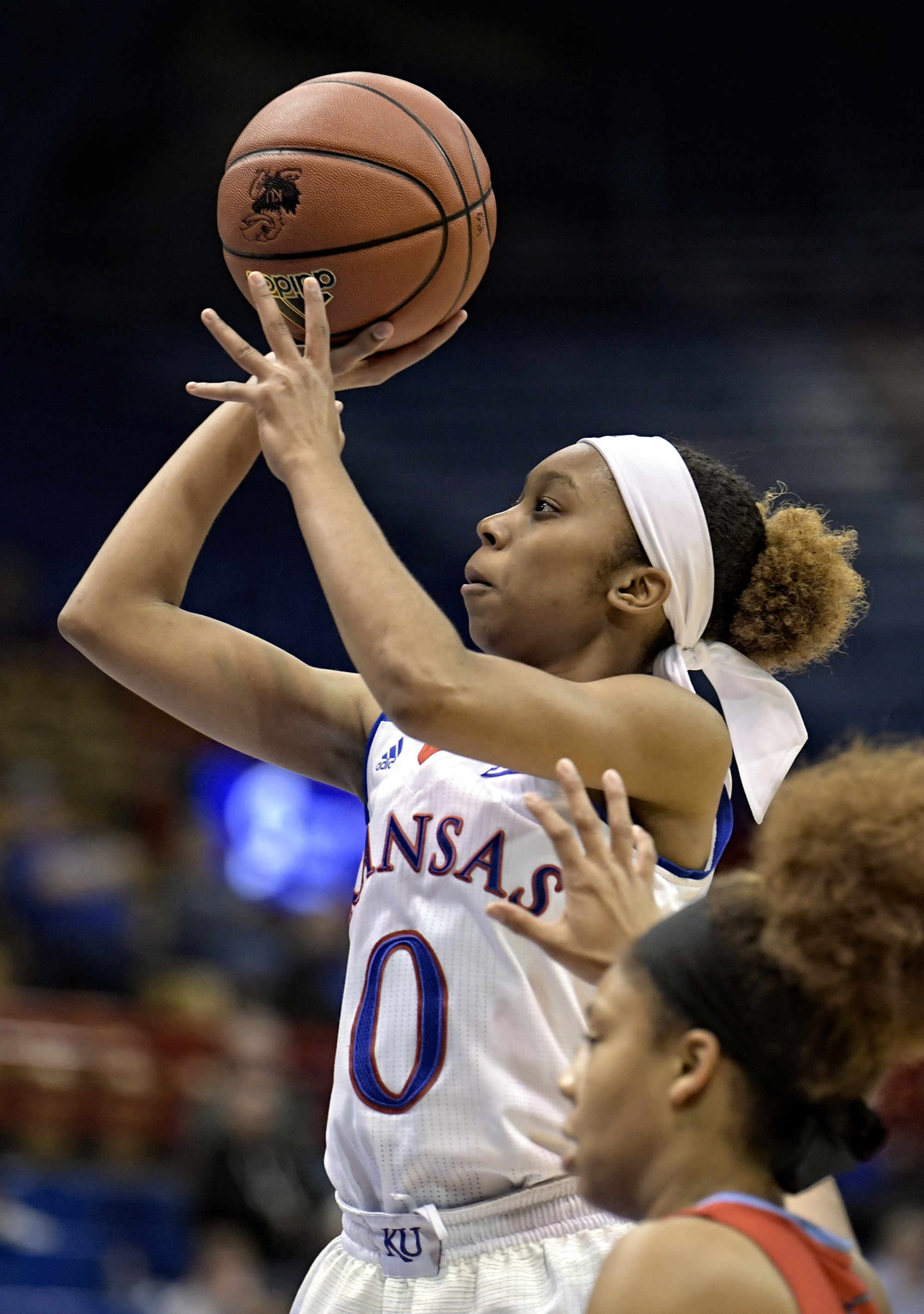 Watch Christalah play this season!
Christalah Lyons has had no problem making a name for herself in her first season donning the Crimson and Blue for the University of Kansas women’s basketball team. While opponents and fans know her as Christalah, those closest to her – family, friends and teammates – know her by the affectionate nickname: Stank.

Stank was a nickname given to Lyons by her mother, Mikie Dean, when she was just a baby and the humorous nickname has stuck around, even now, in her junior year of college at the University of Kansas.

“I don’t stink of course,” Lyons joked. “That’s just the name she (Dean) came up with.”

Nicknames play a big role in Dean’s family so, naturally, Lyons was given one immediately following her birth.

“When she was born I just called her ‘Stank,'” Dean said. “We just come up with these weird nicknames. I used to say all the time, ‘Hey Stank, hey Mama’s Stank.’ And it just stuck with her.”

It took Lyons’ teammates at KU some time to get used to Lyons’ name of choice.

The adjustment to Kansas from Trinity Valley Community College (TVCC) was much easier for Lyons than it was for her teammates to get used to her unique nickname.

After two successful seasons playing at Trinity Valley in Athens, Texas, Lyons wanted to continue to have a key role for whichever team she chose in her remaining two years of eligibility. In two seasons at Trinity Valley, Lyons had led the Lady Cardinals to a 61-10 record.

At TVCC, the Dallas, Texas native became accustomed to the winning culture that Kansas women’s basketball head coach Brandon Schneider is trying to build in Lawrence. Lyons scored a team-best 16 points in an 87-63 loss to Gulf Coast State College in the national championship game her sophomore year at TVCC.

“I feel like we’re in the midst of making some major changes from a cultural standpoint,” Schneider said. “(We’re) just trying to bring in kids who are accustomed to winning and they have a very low tolerance for anything short of that.”

Schneider and the culture that he is working to establish is something that attracted Lyons to Kansas throughout the recruiting process.

“Coach Brandon has been recruiting me since eighth grade and he didn’t ever stop looking at me,” Lyons said. “He believed in me from the get go, so that was a big part (of my decision to come to Kansas).”

Something that Kansas women’s basketball prides itself on is its ability to build and maintain relationships with recruits and student-athletes whether that is through social media, phone calls or in-person visits. The relationship that the coaching staff established with Lyons impressed her and her mother throughout the recruiting process.

“I think it was that they wanted to have a relationship with her,” Dean said. “We went on some recruiting visits where I could tell she was uncomfortable and she couldn’t be herself, so that wasn’t a good place for her.”

Dean wanted Lyons to be comfortable and have the ability to completely be herself wherever she chose to continue her basketball career.

“She needed to be completely herself,” Dean emphasized. “She was able to be free and be herself – goofy, not catching onto jokes and no one pressuring her to try and be something different.”

Through the relationship that Lyons built with the coaching staff, Schneider was able to detail exactly what role she would have for the Jayhawks.

“She came in and she was able to talk to Coach Brandon. He was able to show her where she was going to fit in, what role he had envisioned her to be in and why they saw her to be a good fit here,” Dean said. “Those were things that played a major role in her making a decision.”

After proving her success as a point guard at Trinity Valley, dishing out 98 assists (2.9 per game) during her sophomore season as a Lady Cardinal, Schneider wanted Lyons to focus on her presence on the offensive end.

“He (Schneider) knew I was a good passer, but he really just wanted me to be aggressive on the offensive end and try to score,” Lyons said.

Ultimately, the decision to commit to a college was one Lyons had to make and the relationships she had built with the Kansas coaching staff, her comfort level with the team and filling a role for the Jayhawks were top priorities in the decision-making process.

In fact, the comfort level that Lyons had with the team and the coaching staff made her feel right at home.

“She could feel a one-on-one relationship, not just with Coach Brandon (Schneider), but with the other coaches,” Dean explained. “The team made her feel very comfortable. When you feel like you’re at home, you can play at your level and you can grow.”

And grow she has. After the season-ending ACL injury of the 2017 Big 12 Newcomer of the Year, Jessica Washington, Schneider turned to Lyons as one of the players to help fill the scoring void that would come with Washington’s absence and she has done just that.

“She’s a much better shooter and finisher around the rim, other than Jess, than who we’ve had here in the last few years,” Schneider said.

In her first season with the Jayhawks, Lyons has contributed greatly to the Jayhawks’ offense, scoring in double figures in 14 out of the 15 games so far in 2017-18. Lyons leads the Jayhawks with 14.8 points and 4.1 assists per game through the first half of the season.

Whatever role Kansas needs filled, Lyons accepts the challenge and does whatever she can to help the Jayhawks win. Kansas has showcased its improvements with the addition of Lyons and the rest of the 2017 recruiting class, jumping out to a 7-0 start to begin nonconference play, its best start since the 2012-13 season.

The Jayhawks matched their win total (eight) from last season in just the first nine games of the 2017-18 campaign and continued to show their development into conference season, winning two-straight Big 12 games, including Schneider’s first road win in the Big 12 at Texas Tech (1/3/18).

Lyons is prepared to do whatever she can to help the team win and she did just that against local foe, UMKC. After several attempts by UMKC to diminish KU’s lead in the Jayhawks’ 63-48 victory (11/29/17), Lyons took matters into her own hands, knocking in a career-high 22 points to keep the ‘Roos from completing a comeback.

“My teammates needed someone to step up and that happened to be me,” Lyons said of her career night.

Senior forward Chayla Cheadle has not been surprised by Lyons’ team-first attitude and aggressiveness on the offensive end of the basketball court.

“She comes ready to attack and do what she needs to do every game,” Cheadle said.

Communication is an important part of Lyons’ game as KU’s point guard and something that she has embraced as a part of her role. Although she’s seen as quiet and soft spoken off the court, she has become a more vocal leader on the court with each game.

“She’s a really quiet kid, but I think she is learning that she has to be vocal when she’s on the court,” Schneider said. “She’s got to command her troops.”

Schneider was never shy about his expectations of Lyons and she has looked to meet those expectancies since day one at KU.

“When I came (to Kansas), I knew Coach Brandon wanted me to be a leader so on the first day of conditioning, that’s what I did,” Lyons said. “I led.”

Whether it’s scoring, passing or leading, Lyons is prepared to take on and fill any role that Schneider throws her way.