RCW: From the beginning to the end

Tyler Self hasn’t always been fond of the University of Kansas. When Tyler was nine years old living in Champaign, Illinois, his father, Bill Self, coached the men’s basketball team at the University of Illinois and Tyler actually admitted that he “despised” Kansas. 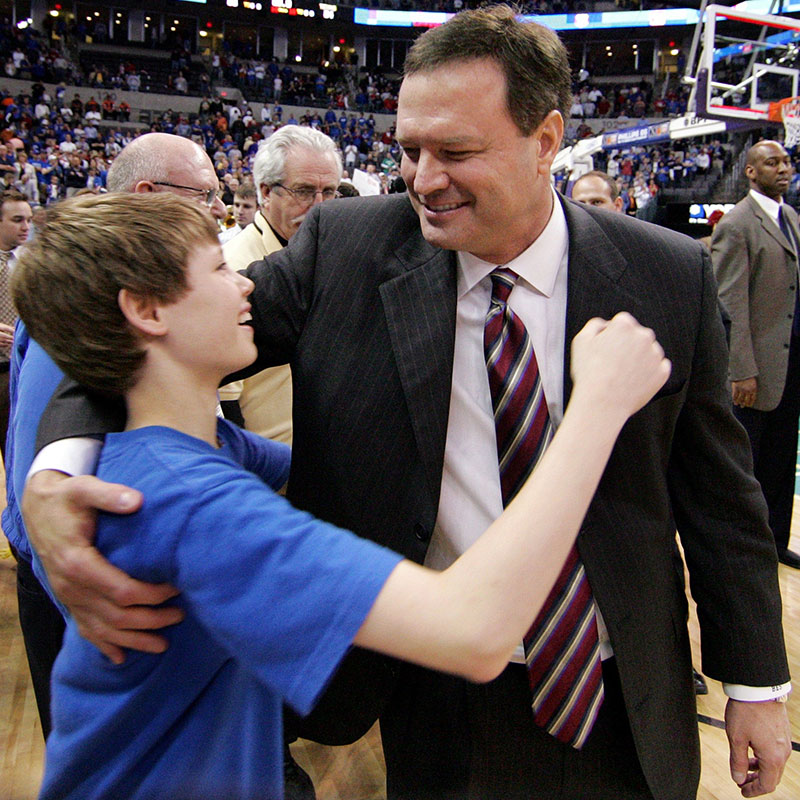 Bill Self was the head coach at the University of Illinois for three years (2000-03) after coaching at Oral Roberts University (1993-97) and Tulsa University (1997-2000). He led the Fighting Illini team to a 53-17 record, a share of the Big Ten title, and the second-most winningest history during his second season at Illinois.

When the elder Self and the Fighting Illini played Kansas and Roy Williams in the Sweet 16 during the 2002 NCAA Tournament, the Jayhawks came out on top with a 73-69 win. During this time the Jayhawks had players who later went on to be successful in the National Basketball Association (NBA) such as Kirk Hinrich, Nick Collison and Drew Gooden.

“I could not stand those guys,” Tyler Self said laughing.

Two years later, when his family excitedly announced that his dad had accepted the head coach position at the University of Kansas, Tyler didn’t exactly share the same enthusiasm as the rest of his family did.

After the move to Kansas, when Tyler was visiting his father’s office for the first time, he recalls when he first met Nick Collison, who’s now a forward for the Oklahoma City Thunder. When Collison first saw Tyler, he immediately introduced himself, asked him about school and what he liked to do, and then invited him to go shoot baskets with him in the Fieldhouse.

At that moment, Tyler, who was 11 at the time, did a “complete 180.” His negative perceptions of KU and its star players had completely vanished. After getting to know all the players, he not only respected them for their basketball ability, but for their genuine, playful character as well. These former players became Tyler’s role models while growing up in Lawrence as a child.

Tyler came to Allen Fieldhouse as much as he could growing up. He was always in attendance for the games, was present at most of the practices, and hung out in the offices after school and on weekends.

“I was lucky to be able to spend a lot of time around the program and the former players. I just fell in love with the whole university,” said Tyler.

After befriending the players and being around the university more, the move from Illinois to Kansas became an easier transition for Tyler.

Fast-forward to 10 years later, Tyler never thought he would be playing basketball at the University of Kansas for his father, Bill Self. The elder Self had never been Tyler’s official coach growing up, but he was always on the sidelines cheering Tyler on and stepping in behind the scenes.

“I never really thought that maybe I would be on one of his teams but I did know that he would always be my coach,” Tyler explained. 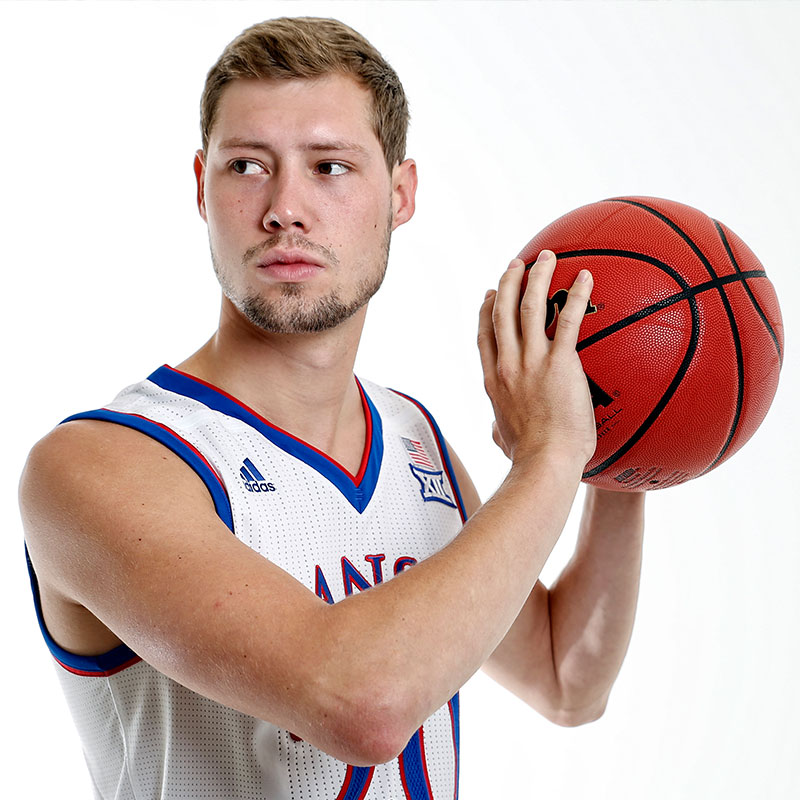 A few days after his graduation from Free State High School, Tyler accepted his father’s offer to join the men’s basketball team at the University of Kansas as a walk-on player.

“He told Cindy and me that he was committing to KU at a Mexican restaurant,” said Bill Self laughing. “The whole thing was pretty funny.”

“They were both kind of surprised. I think they both said, ‘Really’? at the same time,” said Tyler Self in an interview with Gary Bedore, a long-time sports journalist who covers Kansas basketball, reflecting on stating his intentions to play basketball for KU.

“Having been around the program and knowing how prestigious the basketball team has been over the years. That was really my main deciding factor,” said Tyler.

The past four years playing at KU have allowed Tyler and his father to spend more time with each other than ever before.  Now they see each other every day whether in practice, watching film, or traveling to their next game.

“Having my dad as a coach has been icing on the cake. Being able to spend time together, that wasn’t really there when I was younger…it’s just been awesome,” said Tyler.

Many people get caught up in the situation where the demands of their job limits time with their family. But Self values his family more than his job.

“The job is important, but not more important than your kids,” said Self.

Both Self and Tyler agree that the past four years spent at KU together have helped their relationship grow. However, even though they have both been given the opportunity to spend more time with each other, they don’t maintain the same personal relationship on the court as they do off the court. 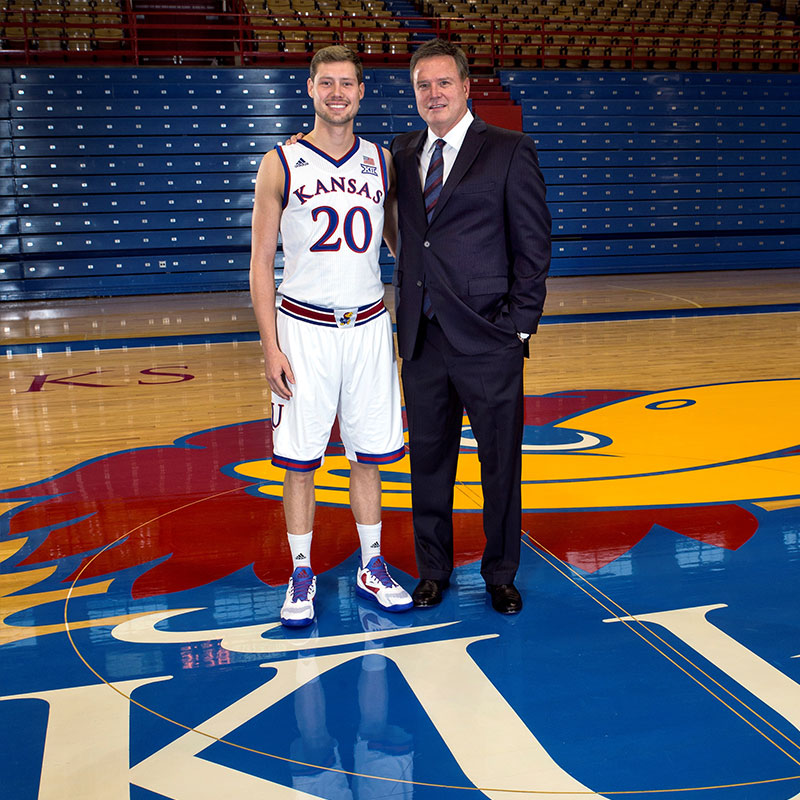 “With the guys he’s a player, but I get the chance to see him enough where he’s not a player in many different situations. That’s been huge. He’s always been able to separate (the two aspects). What happens within our team is totally different than what happens outside our team. That’s one of the reasons why the players respect him and like him so much is because they know they can trust him,” said Self.

It’s no secret that there is nowhere else in the nation quite like Allen Fieldhouse. Famous sportscasters such as Dick Vitale and Jay Bilas have declared it “the best place to play college basketball in America.” The Marlin’s man, who’s been to 70 NBA Finals games and over 200 NBA playoff games, described a game in Allen Fieldhouse as “the best basketball experience” he’s ever been to.

And it’s been exactly that for Tyler Self. Every venue he has played at has never even competed with Allen Fieldhouse. The first time he stepped on the court was in front of 16,300 people during Late Nite in 2013. Tyler was in total shock, although part of that was due to his nerves for dancing.

“Being in the stands hundreds of times and watching games and feeling the crowd, it’s just a completely different experience being on the court and hearing the crowd and seeing everybody,” Tyler said.

Like most walk-ons, Tyler Self hasn’t seen a large amount of minutes during games. In previous years, his main role was to learn the ins and outs of the opponent team’s strategy and replicate it during practice to help the team prepare for realistic game situations. This year Tyler Self will be in charge of running that scout team.

Tyler will also be expanding his leadership role during the 2016-17 season by using his experience to help the Jayhawk freshmen: Josh Jackson, Udoka Azubuike, and Mitch Lightfoot, buy into the program and be ready when given the opportunity to play. 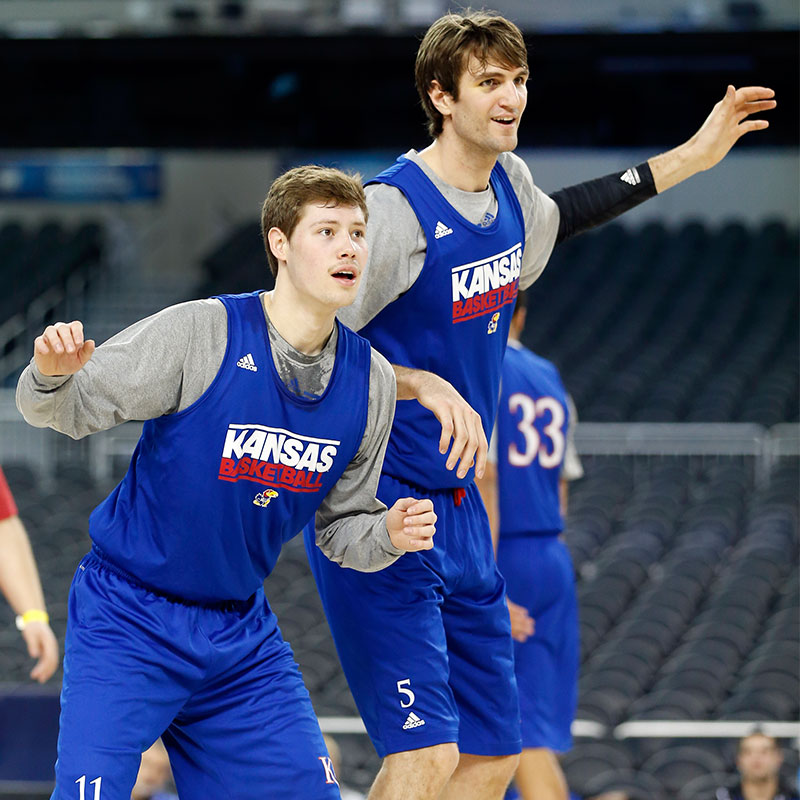 This year, just like any other year, the Jayhawks face high expectations. Last year, the team went 33-5 while achieving its 12th consecutive Big 12-Conference regular-season title and claimed the Big 12 Championship title in Kansas City. Their season ended in the Elite Eight with a loss to Villanova, the eventual National Champions.

“Expectations are still the same. The faces change, but like our coaches say, the expectations stay the same no matter who’s here at the program,” said senior Frank Mason III in an interview with Matt Tait of the Lawrence Journal- World.

When it comes to the team’s chemistry, Tyler can attest that the player’s personalities have mixed well thus far.

“We’ve meshed well together and we’ve only been practicing together a short period of time. I think that we all get along really well. It’ll be a team that has good chemistry in my opinion,” said Tyler. 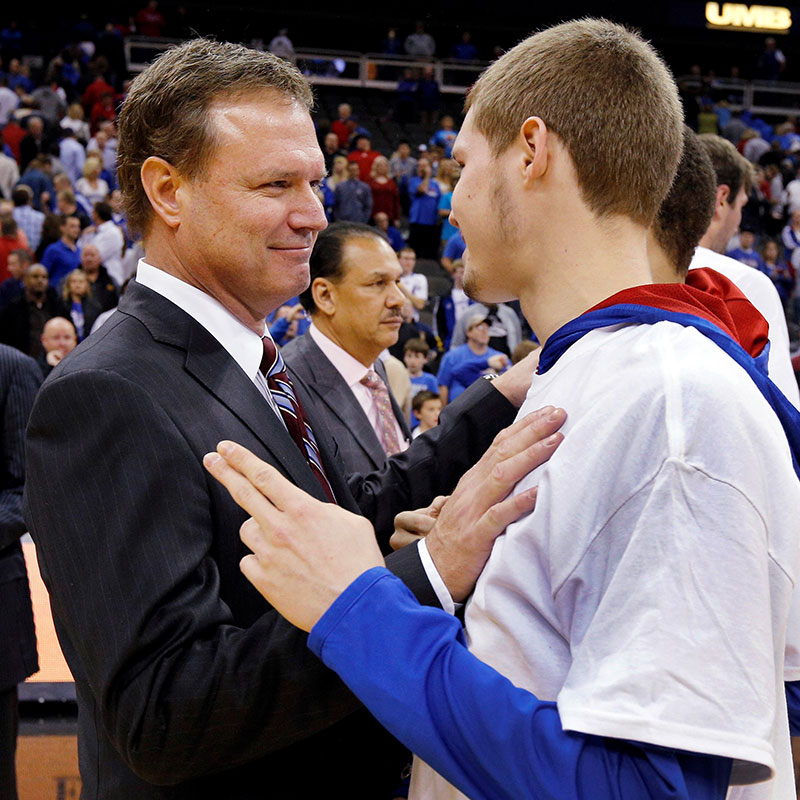 Last May, Self graduated with a degree in Sport Management and has recently started working toward a master’s degree in business administration. Since he can attain the degree online, he will be able to get one year done while playing and will finish the program next year. As for Self’s future career plans, he’s still undecided.

Whatever those future plans may hold, Tyler plans to come back to Allen Fieldhouse for games and practices and help out in anyway possible for the Jayhawks.

Next year will be a big change for Tyler, but also for his dad as well. Coach Self said he’s going to miss a lot things about his son including his sarcasm, insightfulness and intellect.

“There are a lot of things I’ll miss but the biggest thing is just being around him everyday,” said Bill Self.

While Tyler has experienced impressive moments in his collegiate basketball career such as four consecutive Big 12 Conference titles, an appearance in the Elite Eight, and winning a gold medal at the World University Games in Gwangju, Korea, this year he is hoping to make a memories that will last a lifetime.