Going from being a walk-on transfer player to a full-ride scholarship athlete, senior fullback Michael Zunica has truly earned his place on the Kansas football team in more ways than one.

Zunica, a Chicago native, grew up with sports being the heart of his family life.

“When we were younger there was no sitting inside playing video games, it was always picking up the football, baseball or basketball,” Zunica said. 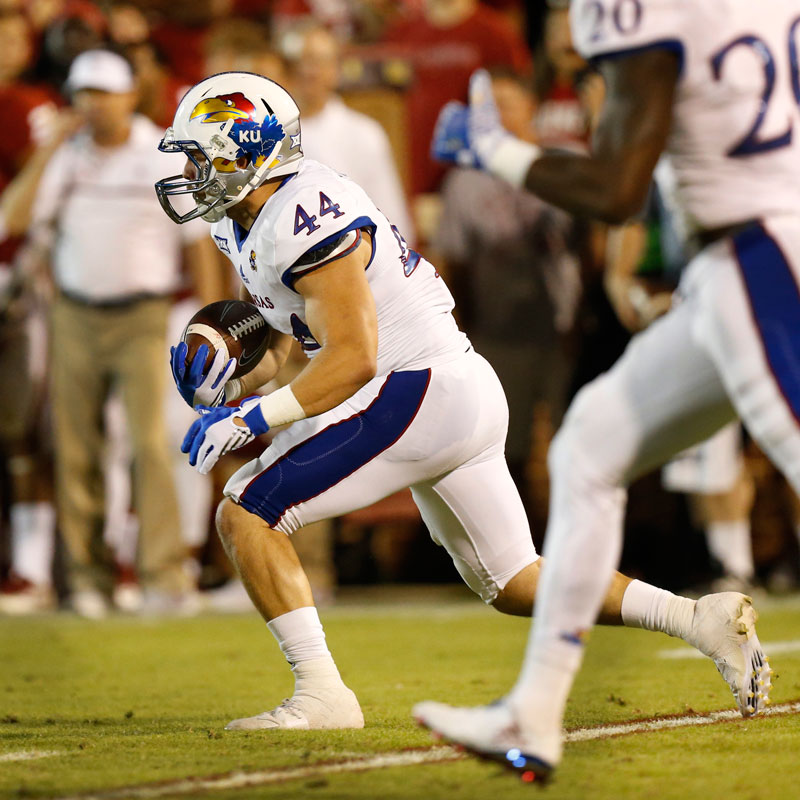 His father, Michael Zunica Sr., played college baseball at Saint Xavier University in Chicago and as recently as 2004, he was inducted into his alma mater’s Hall of Fame. Looking to their dad as an example, Zunica and his siblings all aimed to play collegiate athletics.

“Me, my brother and my sister all played college athletics. It’s just the nature of our family,” Zunica said.

It doesn’t require an extensive look into Zunica’s upbringing to see exactly why sports are truly at the heart of this family. Zunica’s father became a baseball coach at St. Rita’s High School 20 years ago. Whether it was missing class in elementary school to travel with the team, or actually getting to play under their dad’s coaching, St. Rita’s was the center of many special memories for the Zunica family.

This will be Zunica Sr.’s final season before officially retiring from coaching. As Zunica Sr., celebrates his final moments as a coach, Zunica is living proof of his father’s commitment to the sport that he loves.

“He’s a coach’s son, and if you met his dad, he’s a great guy,” Kansas head coach David Beaty said. “He’s been around sports his whole life and you can tell.”

In baseball, the Zunicas often talked about adversity and the learning opportunities it provides them with. 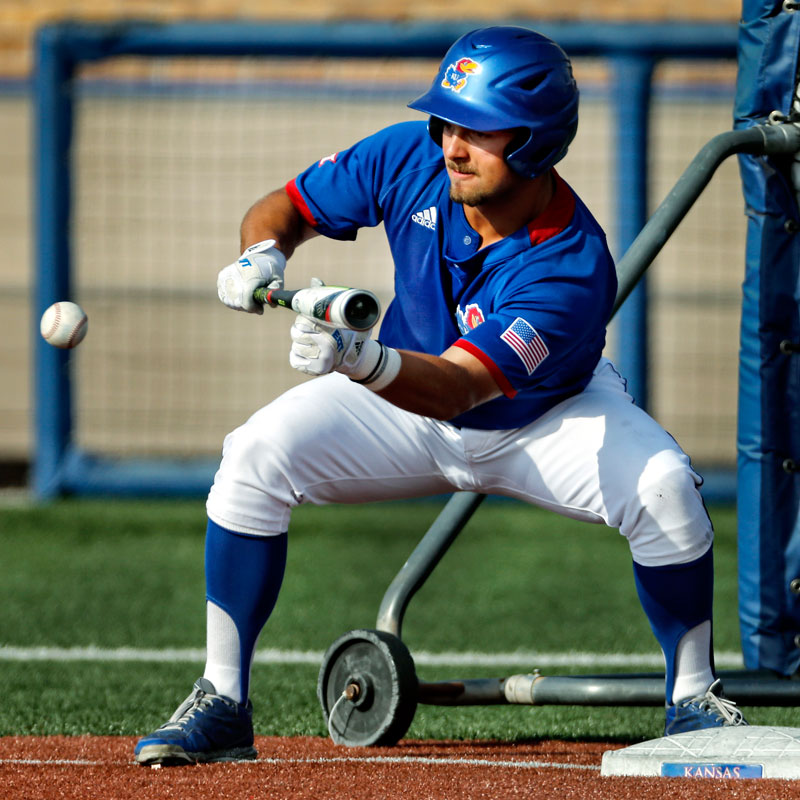 Younger brother Mateo is a freshman on the baseball team.

“Baseball taught us that you’re going to fail a lot, but it doesn’t mean stop going to work every day and stop trying. Everyone’s going to fail. My dad’s favorite quote was, ‘In baseball you could be unsuccessful 70 percent of the time and be a Hall of Famer,'” Zunica said. “Failure makes us better.”

Zunica was constantly transitioning seasons, whether it was playing basketball, baseball or football. Zunica earned three letters in baseball playing under his father at St. Rita of Cascia High School. He also earned two letters in football and one in basketball.

Growing up, Zunica played sports year-round. “My dad’s been a high school baseball coach my whole life, it’s just what we’ve been around and how we’ve been raised,” Zunica said.

It is of no surprise that he is widely regarded as such a flexible a teammate when looking back at his high school years. He continues to maintain a high degree of consistency–one that began as a high school athlete juggling three sports with equal commitment and focus.

While he loved each of these sports, he said he always thought he would go to college to play baseball. It wasn’t until his junior and senior years when he helped lead his team to the Illinois High School Association (IHSA) 7A Playoff semifinals, that he realized he had the most potential as a football player.

“Once I got to my junior, senior years of high school football, it was just going really well for me. So I decided to explore those options,” Zunica said. “It landed me a chance in the Ivy League. That was the goal. That was the best option at the time.”

Zunica began his college career at Columbia University in New York City. He spent a semester there before realizing it wasn’t the experience he wanted.

“Football just wasn’t really up to par there,” Zunica explained. “I didn’t want to stay there and not enjoy my experience just for the piece of paper with my name on it.”

Giving up an Ivy League education to pursue his collegiate football dream, Zunica took a leap of faith and decided to transfer to Kansas. After being recruited heavily by the coaching staff out of high school, he looked to Kansas to see if the offer still stood. Former offensive line coach, Tim Grunhard, told Zunica they’d have a spot for him on the team. 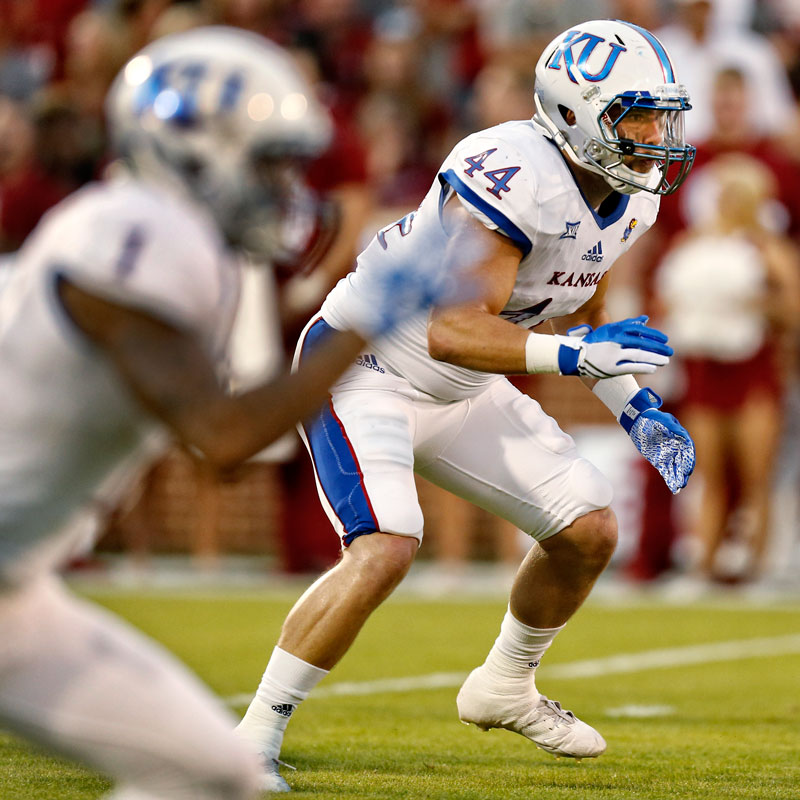 “I picked up and came to KU without knowing anybody here. I felt like I was a little in over my head, talent wise, when I first got here,” Zunica said. “I knew I had a lot of work to do.”

Transitioning to a new school and a new team forced Zunica to catch up quickly. He didn’t let that intimidate him though, instead it fueled him to work harder than ever.

“It was tough, especially being a freshman. I didn’t get to go through all the orientation stuff because I got here a semester late. All the guys on the team had already played a season together, but a group of us walk-ons bonded and really got through everything together,” Zunica said.

Zunica knew he had to prove himself, but he wasn’t expecting playing time to get the opportunity to do so.

“Me and a couple guys went as hard as we could in practice and just tried to go hard every single day and every single rep. The coaches notice that and people on the team notice that,” Zunica said. “They knew us as those guys that were going to give 100 percent effort all the time.”

The leader of the Jayhawks loves Zunica’s effort, but also credits his brains for his success in the program.

“Mike is a guy that’s very, very intelligent that can do a lot of things for us,” Beaty said. “Particularly in that hybrid position where he’s playing where he can attach at the tight end spot, he can be in the back field, we can move him around. He’s very intelligent, which helps him with regard to being able to do multiple things and that’s good. He’s actually a little quicker than you think, which has been good for us.”

Zunica sets the bar high for himself in every aspect of his life. Just as he gives 100 percent effort in football practice, he does the same in the classroom. One of his greatest goals he wanted to achieve at KU was getting a scholarship. 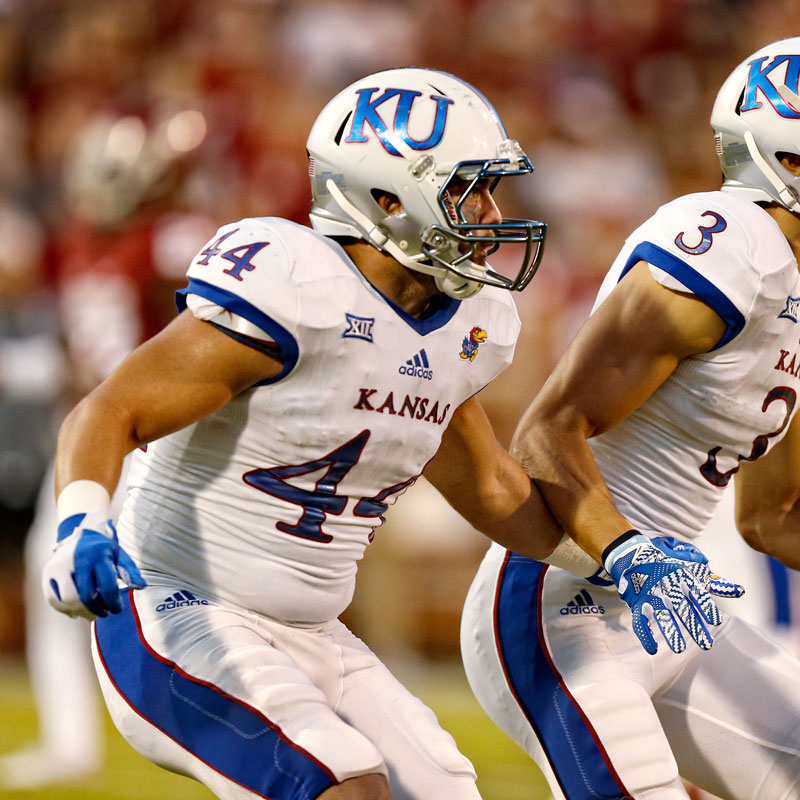 “I came here knowing that a scholarship was a big goal, but it wasn’t the only goal. I wanted to play. If I would’ve ended up playing and had not gotten a scholarship it would’ve been totally fine. But the fact that I got the full ride out of it, that was just a pretty surreal feeling. It helped my family out a lot,” Zunica said.

The man who awarded him his scholarship, Beaty, considers Zunica to a very valuable member of the KU football program.

“Mike’s one of those guys who earned a scholarship here,” Beaty said. “He didn’t come here on scholarship. He has given us value for that, which is what you want. That’s what you hope for. But (it’s) a great story because he’s a guy I don’t think many people thought would have this kind of impact in our program.”

The impact Zunica has had on the KU football program is a direct result of his willingness to go above and beyond all expectations his coaches and teammates may have. When asked where he gets his strong work ethic and drive from, Zunica credited his natural competitiveness.

“I’m competitive. If there’s something I can do that’s going to make me better, I’m going to do it,” Zunica said.

Younger brother Mateo confirmed Zunica’s competitive nature and eagerness to always strive for more from himself and his teammates.

“We’d play baseball games one-on-one and it was so competitive,” Mateo said. “We’re really competitive. He’s four years older than me, but we would try to make it even for each other. I would try to put up a fight, but I wasn’t going to win.”

Keeping that competitive mindset and remembering that someone could be watching at all times, Zunica always gives his absolute best effort. On and off the field, Zunica leads by example.

“I try to hold people accountable,” Zunica said. “I think I offer good guidance for people. People can look up to me like an older brother and know that they can ask me about anything. They know that I’m here for them and that I’m going to hold them accountable on the field too because that’s just what we have to do.”

Zunica has set the perfect example for his younger brother, Mateo, who is just beginning his baseball career with KU this year.

“My brother has been my best friend since we were young. He’s doing a good job for himself, he’s a hard worker and a motivated guy,” Zunica said.  “I think we motivate each other because we’ve competed growing up, and it’s just never changed. Now we’re each other’s biggest fans.”

Both brothers agreed, they’re very similar when it comes to sports and working hard to achieve their goals. 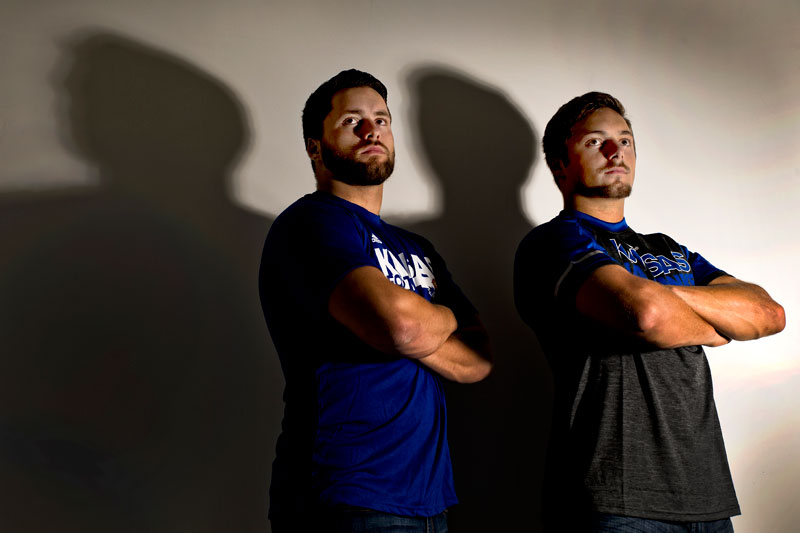 “We’re definitely similar. He’s always been the person I’ve looked up to, so I have modeled a lot of stuff he does,” Mateo said. “He was a walk-on for football, I walked on here. I think we both know that we have to work really hard to get what we want. And if we do work hard, we can achieve it. We both know there are no limitations on what we can do.” 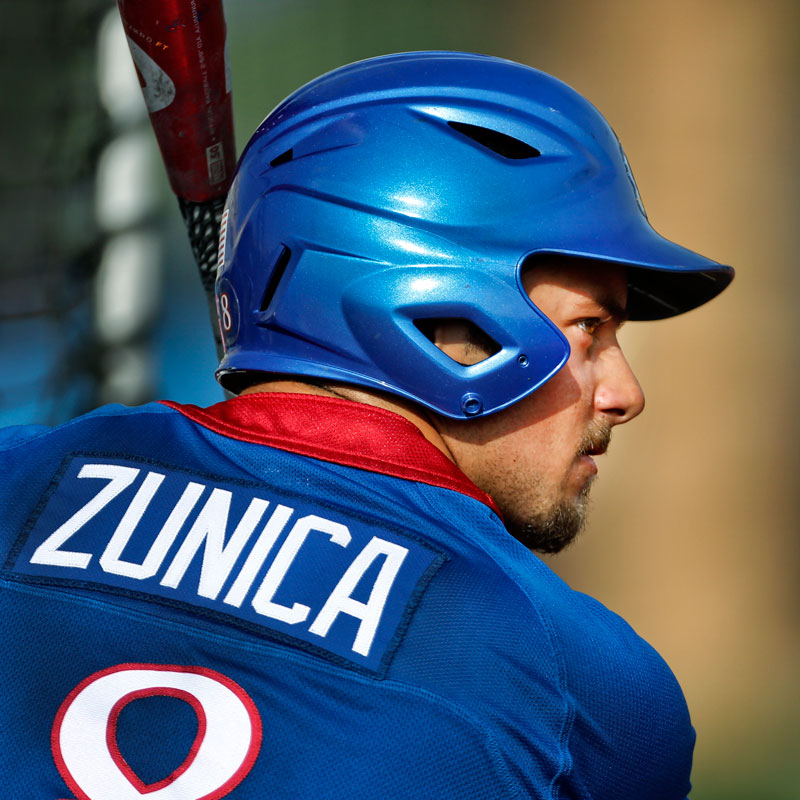 “I think it’s so cool to see him out there,” Mateo said. “He’s not the biggest guy, he’s not the strongest guy, but he’s out there competing against some of the best in college football. I loved seeing him get that ball. It was his first collegiate catch and it was the first time he had the ball, so my dad and I thought that was pretty cool.”

Looking ahead, Zunica has hopes of continuing his football career or beginning a new career in wealth management.

“I’m obviously going to train for my Pro Day pretty hard and see where that will take me. I’m going to go as far as I can with that,” Zunica said.  “I’m also starting to look into some jobs though. I have a couple interviews lined up in Chicago for when I go home.”

With just three games left in his collegiate career, Zunica will miss the bond he has shared with his teammates and coaches over the past few years.

“I’m going to miss going to work with the same guys, having the same attitude every day. It’s not work when you love what you’re doing,” Zunica said. “We all have a common goal. I really love the coaching staff. They’ve all taught me so much, I’m indebted to them for a lot.”