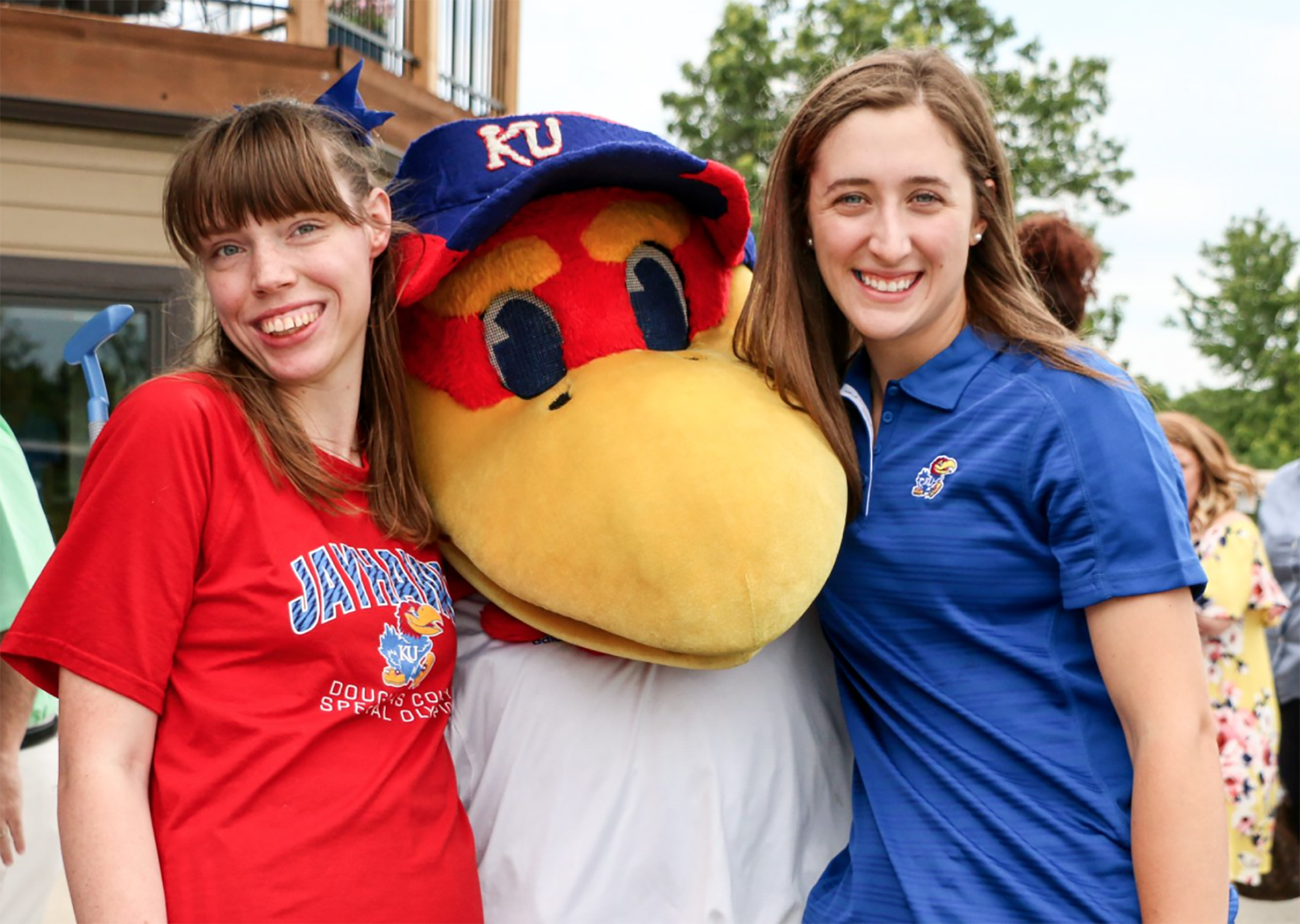 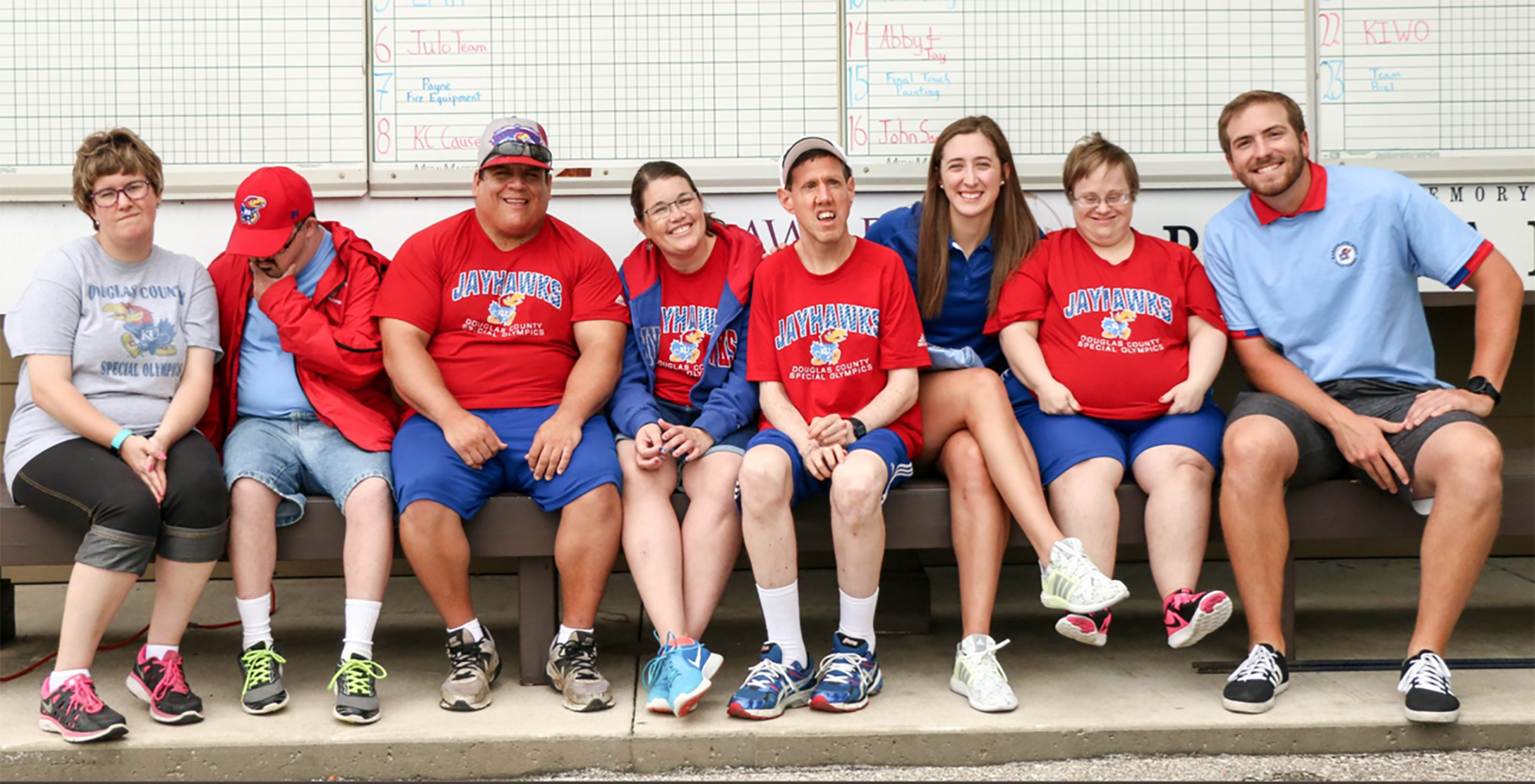 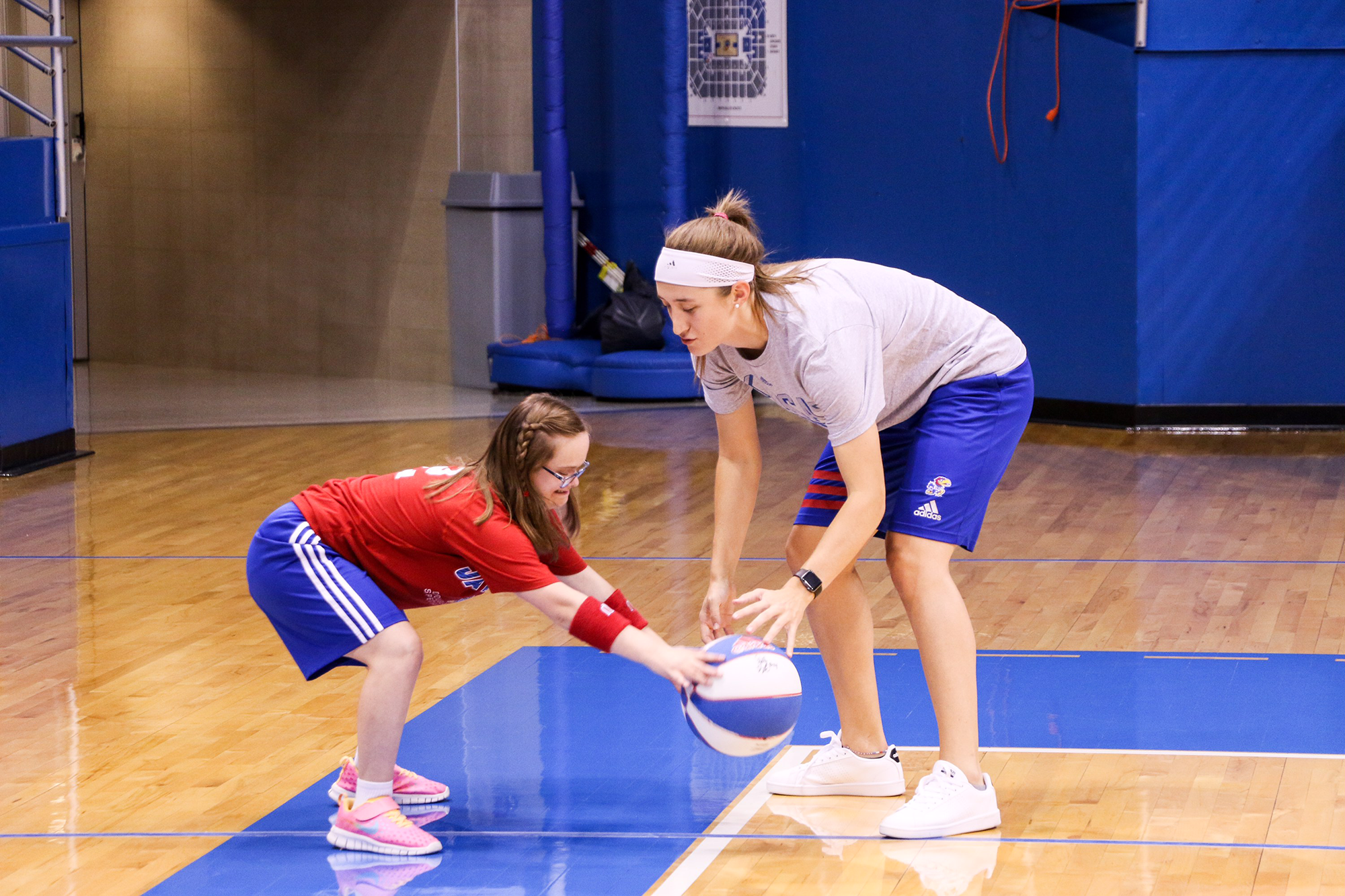 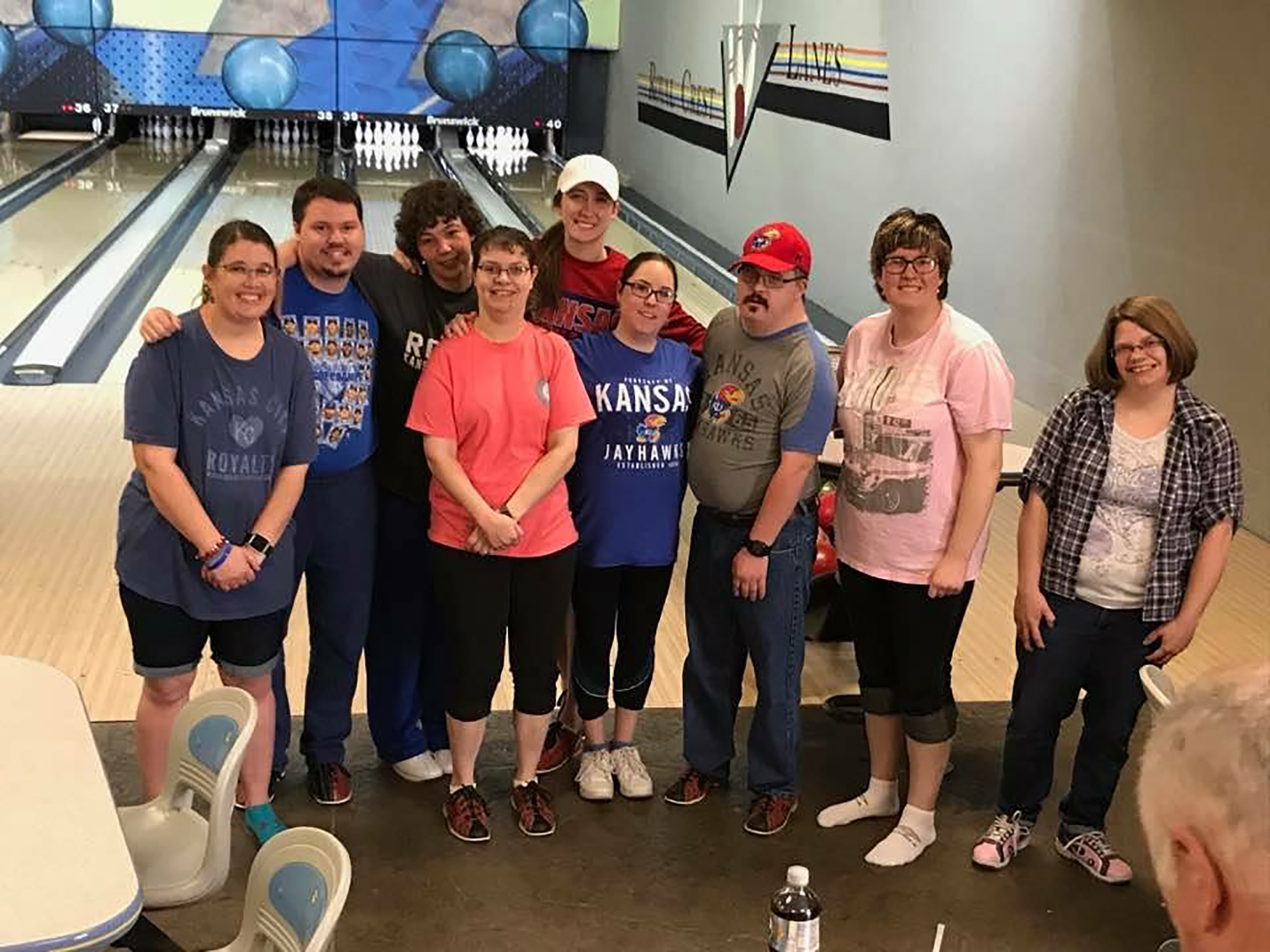 In Lawrence, basketball fans frequently line the north concourse of Allen Fieldhouse days in advance of basketball games, “camping out” to be as close to the action as possible. Each fall, Marvin’s Grove’s tailgating faithful exchange high-fives with members of the Kansas football team as they parade down Campanile Hill toward Memorial Stadium. In Horejsi Family Athletics Center, volleyball fans exhibit their own athleticism to catch miniature volleyballs thrown into the crowd as each player is introduced.

In sports, the connection between the fan and student-athlete often runs deeper than a high-five, sore vocal chords or an autograph. Favorite athletes become namesakes for newborns, championships have the power to unite entire communities, professional athletes speak out on social causes and become role models on and off the court or field. The connection between the fan and athlete can transcend a win, loss, point total or performance.

Kansas women’s basketball’s junior guard Kylee Kopatich shares a unique connection that is rooted in the power of sports and its ability to bring people together. When Kopatich is not draining 3-pointers and bringing Jayhawk fans to their feet, she just might be cheering on some of her own favorite athletes and biggest fans.

Kopatich’s bond with the athletes goes beyond supporting them from the sidelines as a fan or from the team bench as their coach. Kopatich and many of the Special Olympians have become close friends over time. Athletes frequently text Kopatich to talk about all sorts of things.

“They love to tell me if they are coming to one of the games or text me if they have a boyfriend now, which I know everyone’s personal life there,” Kopatich said.

These personal connections are not uncommon to Kopatich. During her time at Olathe North High School, Kopatich developed a relationship with a student named Trevor, who has Down syndrome.

“He [Trevor] was a big basketball fan and would come to a lot of games. He was kind of my first, ‘I kind of want to get to know you,'” Kopatich said.

The friendship flourished and Kopatich describes Trevor as her first inspiration. Since coming to Lawrence over three years ago to attend college and play basketball for the Jayhawks, she has returned to Olathe to spend time with Trevor on multiple occasions. She accompanied him to his prom.

During her recruitment and once she arrived on campus, Kopatich recognized the Kansas women’s basketball team’s relationship with the Douglas County Special Olympics. The team holds summer camps with the athletes and has had Special Olympics basketball games at half-time of home games in Allen Fieldhouse.

Despite the demanding schedule of being a Division I student-athlete, Kopatich has made it a priority to expand on her experiences with the Douglas County Special Olympics and has been volunteering regularly with the organization since day one.

“Kylee has a great personality, she is great at communicating and is so positive,” McCleary said. “The athletes love and enjoy Kylee and love to watch her play.”
Perhaps the strongest point of this connection is that Kopatich and the athletes’ unwavering support is mutual. There are a handful of Special Olympics athletes who can be spotted in the stands of Allen Fieldhouse at nearly every home women’s basketball game.

Brady Tanner is an impressive weightlifting talent and Douglas County Special Olympics athlete who has formed a bond with Kopatich during her time at KU that is similar to her inspiring relationship with Trevor back in high school. Brady attends nearly every home basketball game and refers to Kopatich as, “My number 33.”

In this case, the ardent support goes two ways. Kopatich attends Brady’s weightlifting competitions and in turn, cheers on one of her own most loyal supporters.

“He can squat like 600 or 700 pounds, it’s insane. He is so positive, he is cheering himself on when he is doing it. It’s so much fun,” Kopatich said.

Although Kopatich has a very special bond with Brady, she is a huge fan of all athletes at the Douglas County Special Olympics and frequently attends events across all sports. One of her favorite memories came when she brought one of her t-shirts to a basketball game and asked the players to sign it. Kopatich’s dedicated support is well-accepted by the athletes and number 33’s impact is meaningful.

Brady’s father, Gary Tanner, described Kopatich’s friendly and welcoming personality as one that makes it clear to Brady that she is, “a part of his world.” The elder Tanner recounted a time when Kopatich went the extra mile to include his son.

“Kylee invited Brady to a pre-game meal with the team last year and made sure he fit in and felt welcome,” Tanner said. “That is one of my favorite memories.”
Tanner’s story is just another example of how Kopatich’s connection to the Douglas County Special Olympics goes beyond sharing autographs or cheering from the sidelines. Volunteering her time with the Special Olympics has been a beneficial learning experience outside of school and basketball for Kopatich.

“They [the athletes] have a positive mindset for everything they do, they never complain or anything. Each time I hang out with them, I think I get a little bit better in that area,” Kopatich said.

Kopatich believes the relationship between the Kansas women’s basketball team and the Douglas County Special Olympics has also proven beneficial for the entire Jayhawks’ team.

“It helped them [the team] realize we have a huge fan base that is so eager to come and is so positive all of the time,” Kopatich said. “I think the team is more grateful that we have this ability to have so many people look up to us.”
Supporting the athletes of the Douglas County Special Olympics is the least the Kansas women can do, according to Kopatich.

“They take time every week to come to our games, so the least we can do is show them support back; even if it’s just a little autograph, a picture or going to one of their games,” Kopatich said.

Kopatich goes above and beyond the least she could do, and always has when it comes to creating personal connections with those who look up to her as a role model, coach, supporter and/or friend.

The meaningful link with the Special Olympics’ athletes has provided Kopatich with inspiration, support and friendship both on and off the court. Much like the transition from high school to college, Kopatich plans to continue to seek out opportunities to connect with various charity organizations once her days at the University of Kansas have come to an end and she moves on into the next stage in her life. One day, Kopatich hopes to work in community relations for a professional sports team.

When that day comes and Kopatich reflects on her time at Kansas, and as a Jayhawk, she will likely remember seeing some of her most passionate supporters cheering on their own biggest fan.