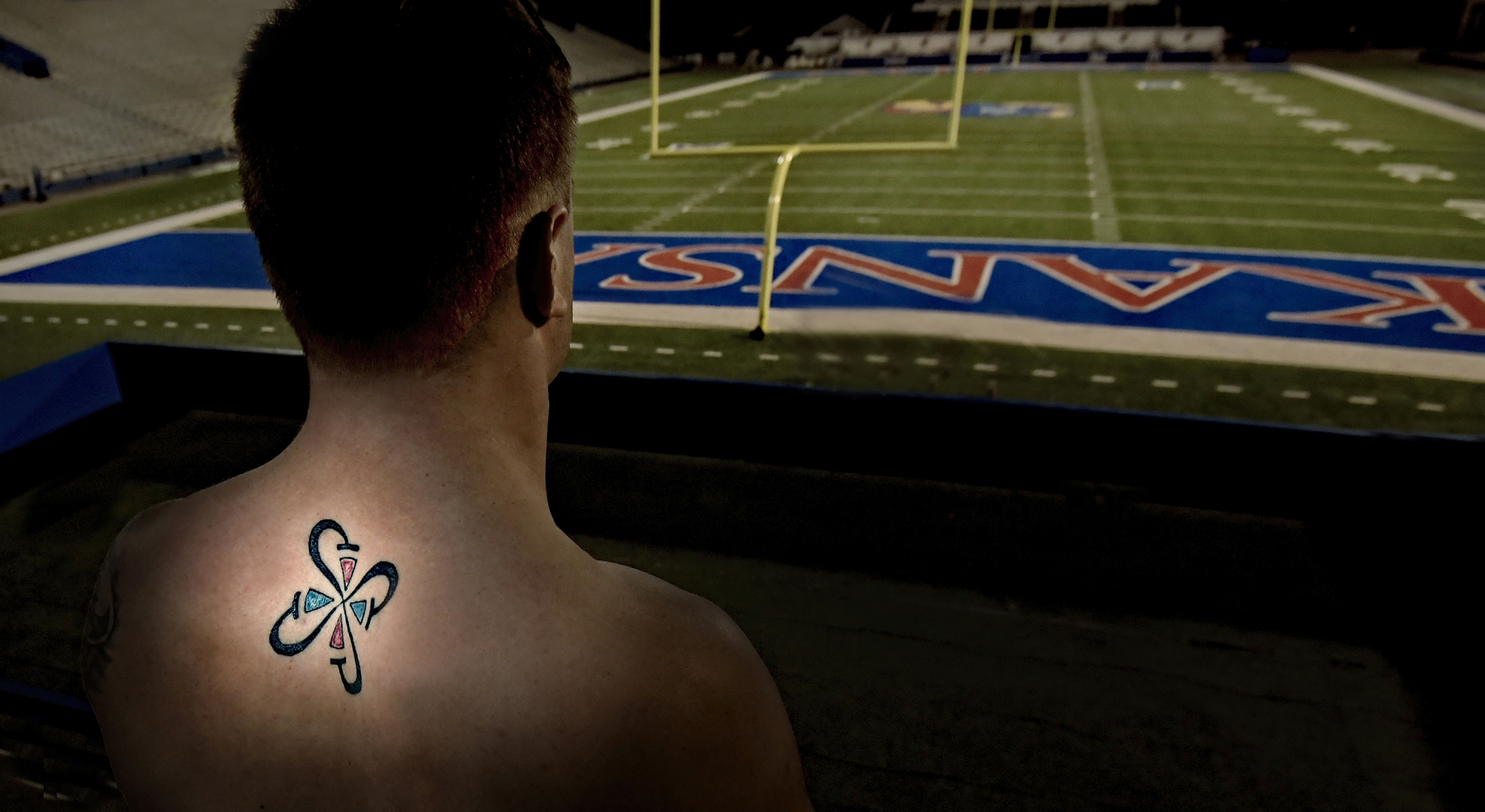 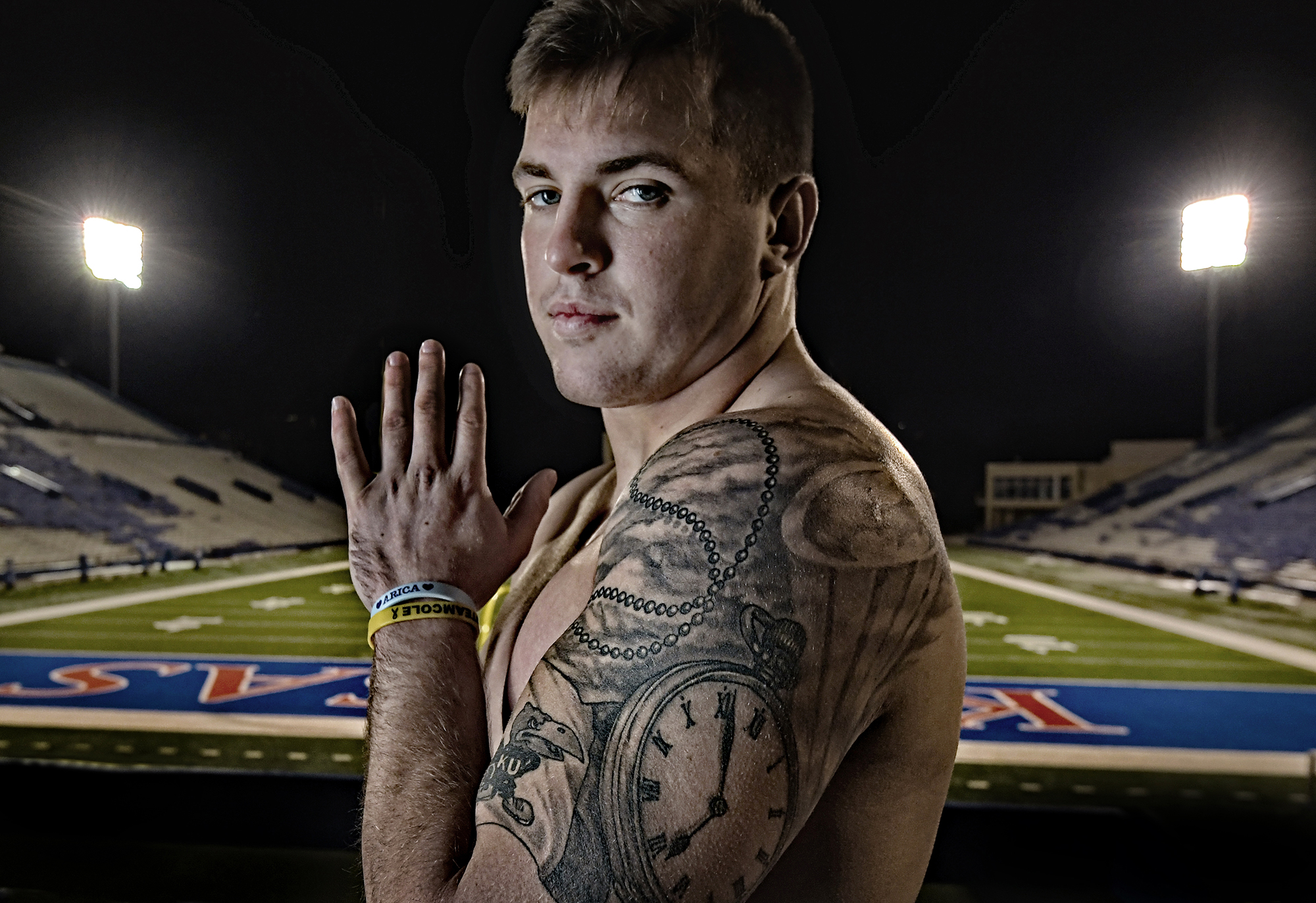 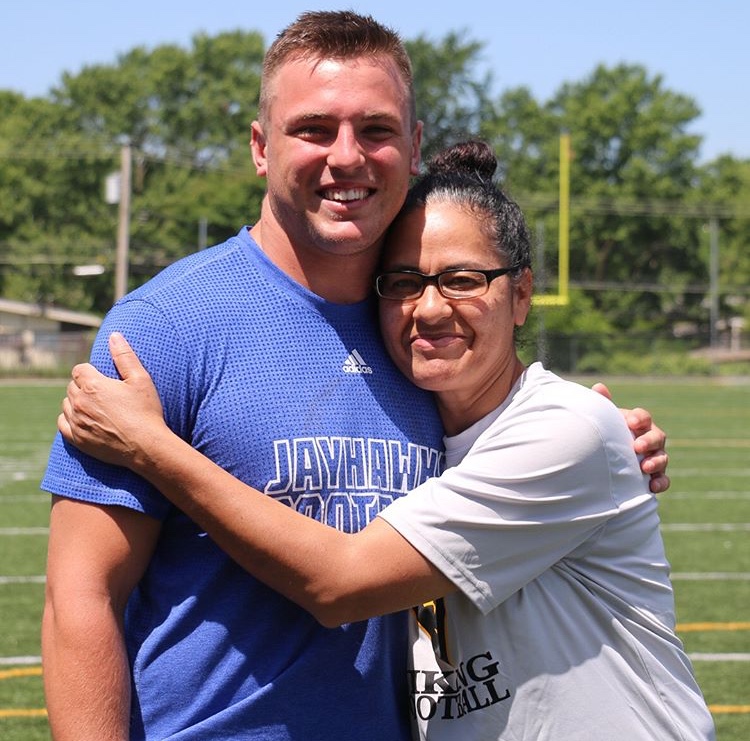 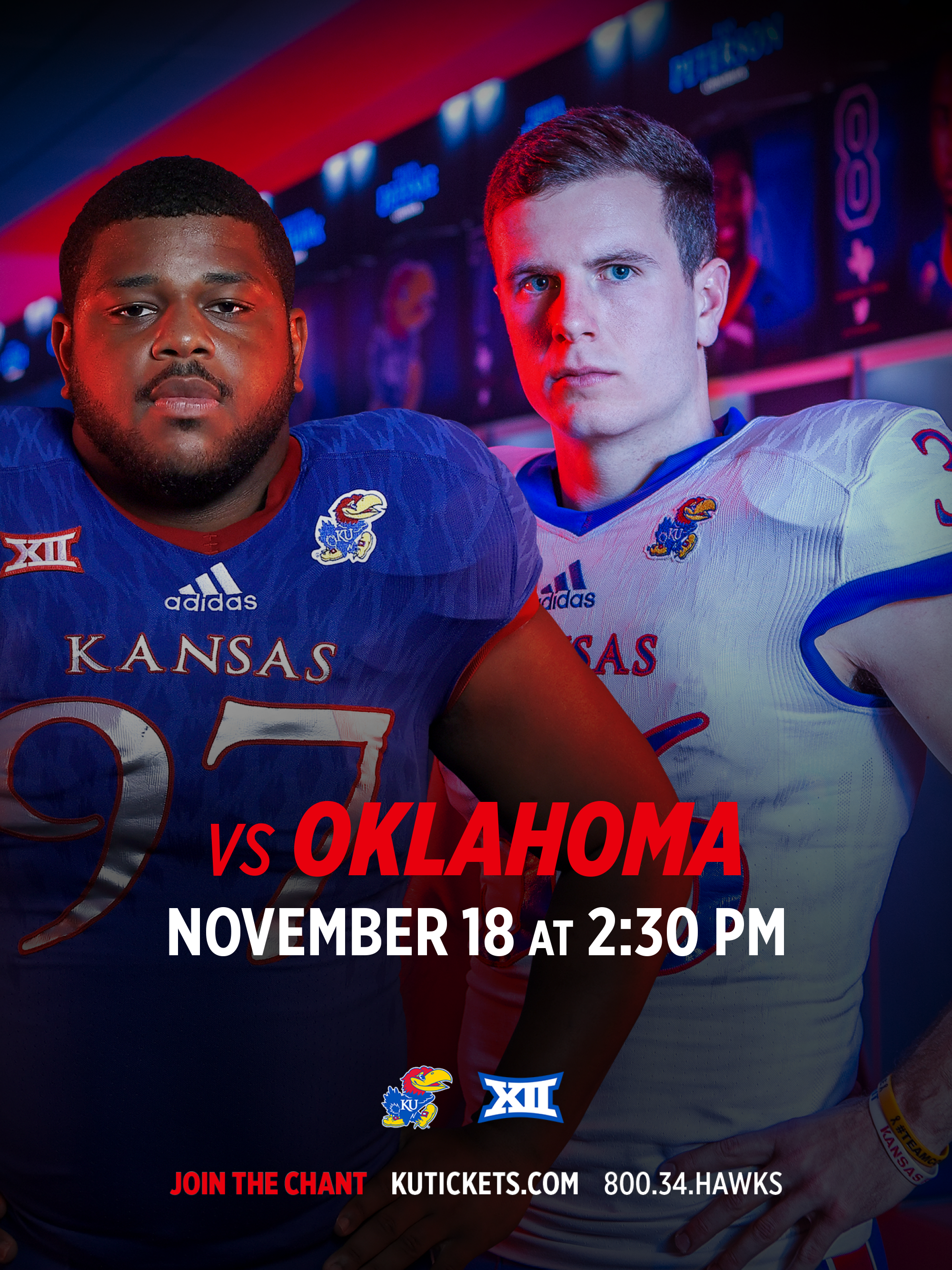 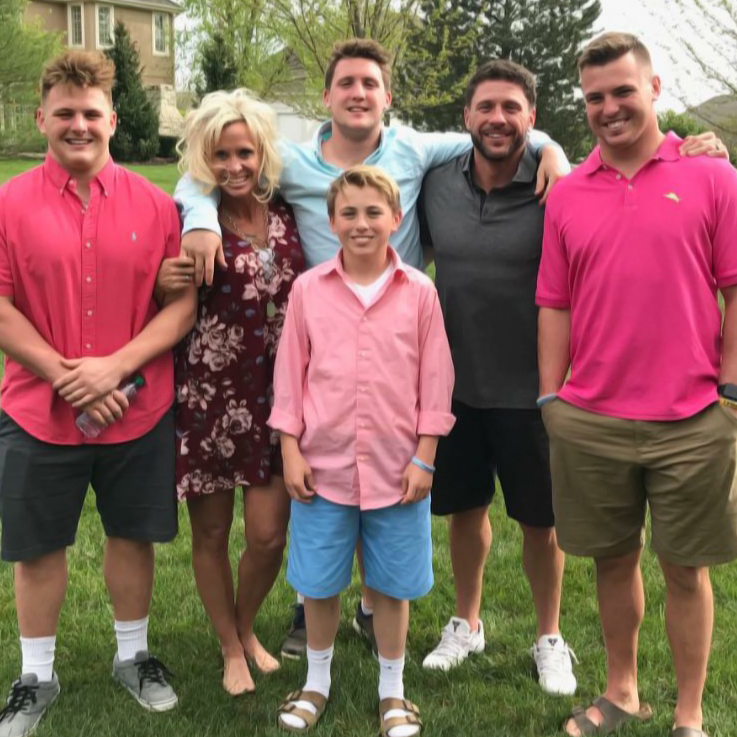 Growing up in Lawrence, Kansas, attending KU and playing football, was always something redshirt-junior linebacker Joe Dineen Jr., had dreamed of.

Dineen had plenty of family footsteps to follow in. Both of his parents, Joe Sr., and Jodi Dineen, are Kansas graduates. His mother was a volleyball letterwinner; Ron Oelschlager, his grandfather, was a running back at KU and his great-grandfather, J. Roy Holliday, played basketball under legendary coach Phog Allen.

“My parents did a great job of letting me do the whole recruiting process,” said Dineen. “I went to other schools, but I think I always knew I was going to end up here because of the legacy and being from Lawrence.”

Before making the transition to linebacker in college, Dineen played both quarterback and safety at Free State High School. During his senior year at FSHS, Dineen led the Firebirds to the Class 6A state quarterfinals and accounted for 32 total touchdowns. He also set the school record for most defensive points scored in a career.

“Moving positions wasn’t super hard,” said Dineen. “In high school, I was kind of a glorified linebacker. I was down around the line of scrimmage a lot. I was more used to it than people think. The coaches I had did a great job of working me into it. Coach (Clint) Bowen; Coach (Kevin) Kane, when he was here; and Coach (Todd) Bradford have all helped me tremendously in understanding what you need to do to be a good linebacker.”

In addition to the coaching he received during his position transition, Dineen was able to compare and contrast the differences between high school and collegiate football.

“You need to be instinctual and get off blocks,” said Dineen. “The big difference from high school, even though I was around the line of scrimmage, was that I never got blocked. The hardest thing for me was to figure out how to get off blocks and take on blocks. The coaches do a great job of teaching technique and working your way around.”

As his sophomore year progressed, Dineen began to figure it out. He recorded four games with double-digit tackles, including the most of any Jayhawk in 2015 with a career-best 16 against West Virginia (Nov. 21). His junior year, Dineen started three games, but suffered an injury at Memphis (Sept. 17, 2016), ending his season and ultimately receiving a medical redshirt.

Now, Dineen is healthy, back on the field for Kansas and leading the defense in a big-time way. He tied his career-best 16 tackles against Iowa State (Oct. 14, 2017). He leads the country in solo tackles at 8.0 per game. He is first in the Big 12 Conference and third in the nation in tackles-for-loss with 2.1 per game. Lastly, Dineen leads the league and ranks third in the nation for total tackles at 11.9 per game.

Throughout his four years, Dineen has had the support of his family at home and on the road, including younger brother and redshirt freshman Jay.

“Joe, being the oldest, and having younger brothers who play on Friday nights and even Tuesdays and Thursdays, I was really excited that he stayed where we could go to almost every game,” said Jodi Dineen. “We’ve been really fortunate this year. The Ohio game is the only one we missed. We usually just jump in the car or have a really early flight Saturday morning right after Jax’s high school games.”

Dineen has three younger brothers who all play football, including Jay; Jax, a junior at Free State; and Jet, the youngest at 13.

“The boys all really like each other,” said Jodi Dineen. “Joe and Jay like coming home and seeing their younger brothers. When Joe is in the hotel on Friday nights before his games, he’s texting me the whole time to see what the score of the Free State game is and how Jax is doing. Jay will always call to see if Jet won or lost. The younger boys get excited when Joe and Jay come over for dinner on Sunday nights. It’s a good time for them to come and unwind. Jay still brings his laundry. Joe did that for a couple years, but he does his own now.”

The University of Kansas campus is located at the center of Lawrence on Mt. Oread, and oftentimes, Kansas students become fully engrained in campus life. Unlike many of the other students, being a hometown kid, Dineen has the luxury of going home whenever needed or wanted. Whether it is to see a friendly face, get a home-cooked meal or watch his brothers play, Dineen is just a few minutes away.

“You can go to KU and never come home or see the townspeople, but it’s nice that we are here since they do get along so well and care about how each other are doing,” said Jodi Dineen. “Jay has had two surgeries so I feel really fortunate to be here for that. Your freshman year is tough anyway, so the fact that he’s been close to home for that has been nice for him.”

Like his older brother, Jay also wanted to carry on the family legacy of being a Jayhawk. Following in his family’s footsteps, he wears number 43 to honor his grandfather, Ron Oelschlager, who played running back at Kansas from 1962 to 1964.

“He wore it in high school and they got in a little bit of a bind,” said Jodi Dineen. “He told the coaches he would switch to lineman his senior year and had to switch to number 50. When Coach (David) Beaty recruited him, he told Jay that 43 was available if he wanted it. I think Coach Beaty knew that my dad had worn 43 when he was there, so that was pretty cool.”

Uniform number 43 is not the only meaningful number to the Dineen family. Before his freshman year at KU, Dineen decided he wanted to carry on more than just his family’s legacy. He wanted to carry on the legacy of Andre Maloney. Maloney, who wore number 29 in high school, played football at Shawnee Mission West and had verbally committed to Kansas the same year as Dineen.

In 2013, during his senior year, Maloney collapsed on the sideline after scoring a touchdown. He was immediately taken to the hospital where doctors discovered he had suffered a stroke and had a blood clot in his brain. Maloney passed the next afternoon.

“I was number 12 all the way up until college,” said Dineen. “I wear number 29 now to keep his (Maloney’s) legacy alive here. There are guys at other schools who have done it too. (Justin) Hobbs, who is a receiver at Tulsa, was his teammate in high school and wears 29 because of him.”

Learning that his recruiting class teammate had suddenly and unexpectedly passed away, Dineen came up with an idea of how he could honor who would have been his future teammate.

“After I heard he passed away, it popped into my head that it would be a cool deal to do for him,” said Dineen. “The coaches were nice enough to give me his number. It’s a ‘never forget’ deal. There’s a seven-on-seven tournament at Shawnee Mission West, where he played, and I’ve gone over there and spoken a couple of years.”

In both 2014 and 2017, Dineen was the featured speaker at the tournament. He talked to the hundreds of high school football players in attendance about the importance of hydration and taking concussion symptoms seriously. This is just another way Dineen has honored his fallen friend in the past.

“I do the best I can to keep Andre’s memory alive,” said Dineen. “He has a great mom and what happened is tragic and unfair. I try to show as much support as I can.”

Showing support is nothing new to the Dineen family. From attending each other’s football games to sharing a family tattoo, they are always connected. It started with their dad, Joe Dineen Sr., wanting to get a meaningful tattoo.

“We tried to come up with something that had to do with the boys’ names or birthdays,” said Jodi Dineen. “He took some ideas down to the tattoo shop here in town, told them what he was thinking and they came up with the design.”

Everyone in the family, except for 13-year-old Jet, has the tattoo, which consists of four J’s connected in a circle, representing the four boys, with triangles of their birthstone colors between them.

“They gave me a gift certificate for Mother’s Day to go down there and get it,” laughed Jodi Dineen. “When Joe first got to KU he said he was literally the only guy on the team that did not have a tattoo.”

Once the eldest Dineen brother had the family ink inscribed on his back, like oftentimes happens, the younger siblings wanted to follow in his footsteps.

“I told him I would pay for it if he got what we did,” said Jodi Dineen. “You have to be 16 to go with an adult here in town. Jay was 17 and got his before his senior year and Jax is 16 and got it right when he turned 16. I told them they could get it early if they all got it because it’s meaningful with it including all of the brothers. We laugh about it and say we have a family crest.”

Other than the Dineen family tattoo, another important part of their family’s lives was, is and always will be, the University of Kansas.

Dineen described it best when he said, “We’re Jayhawks through and through.”