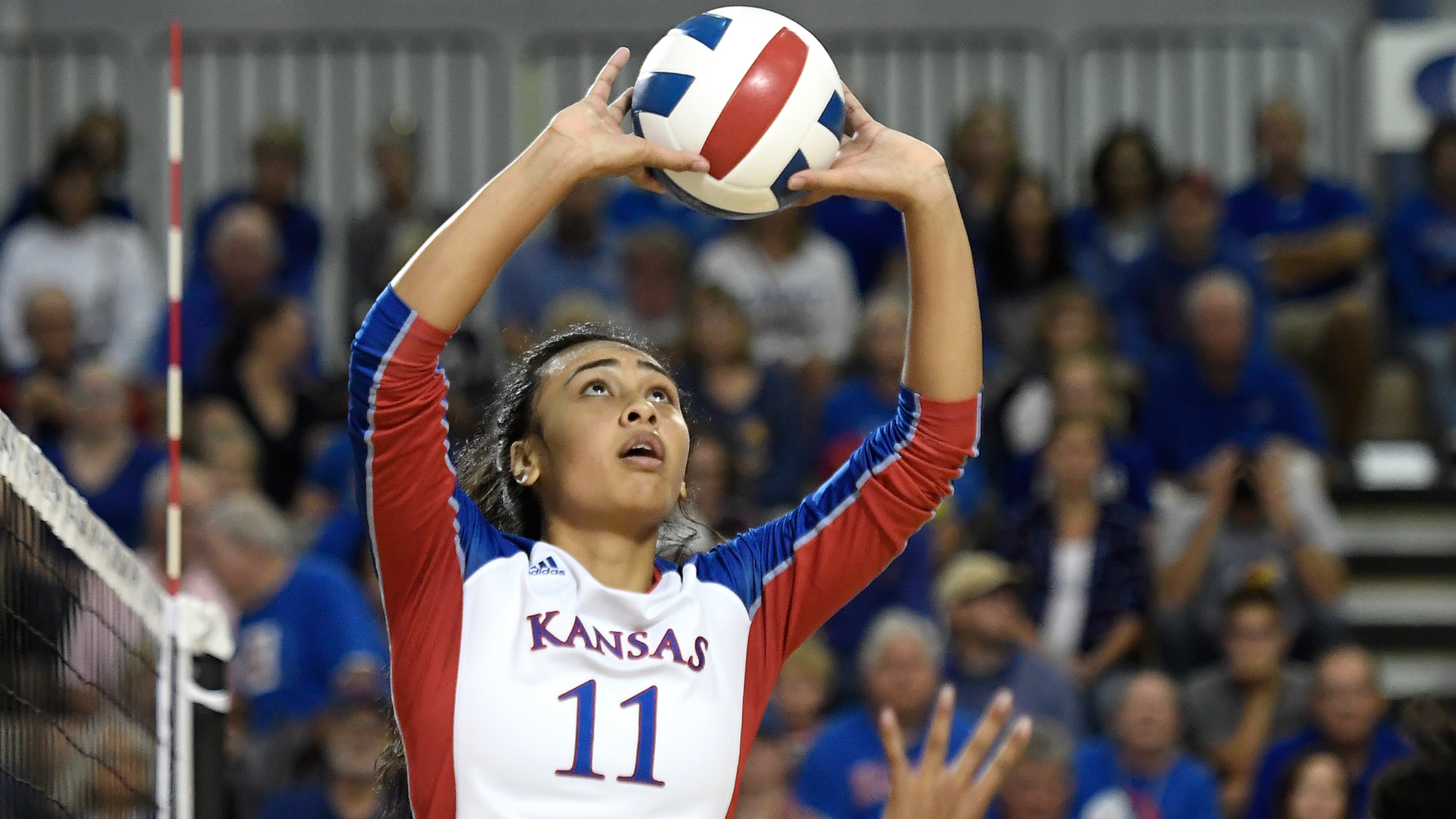 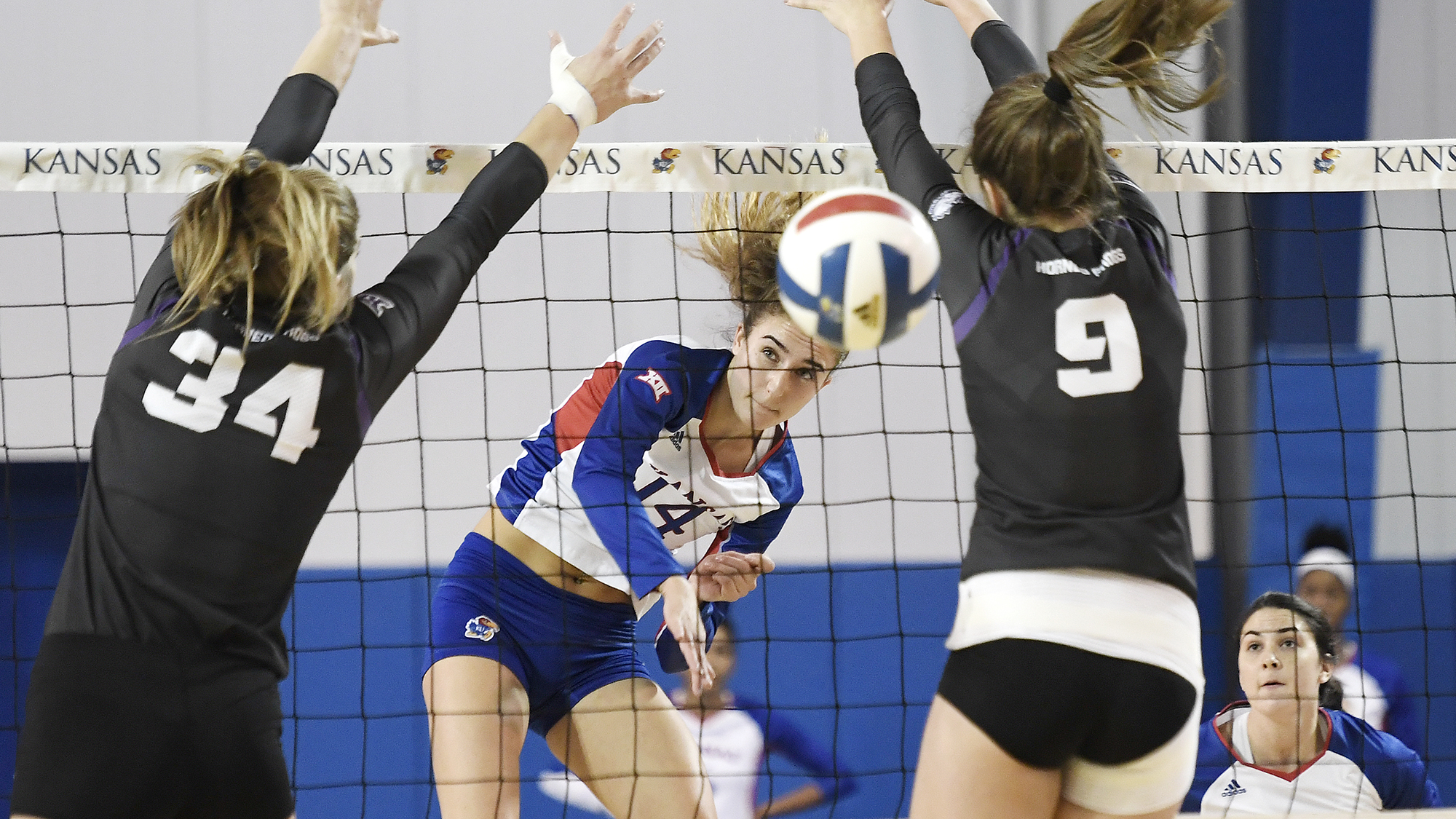 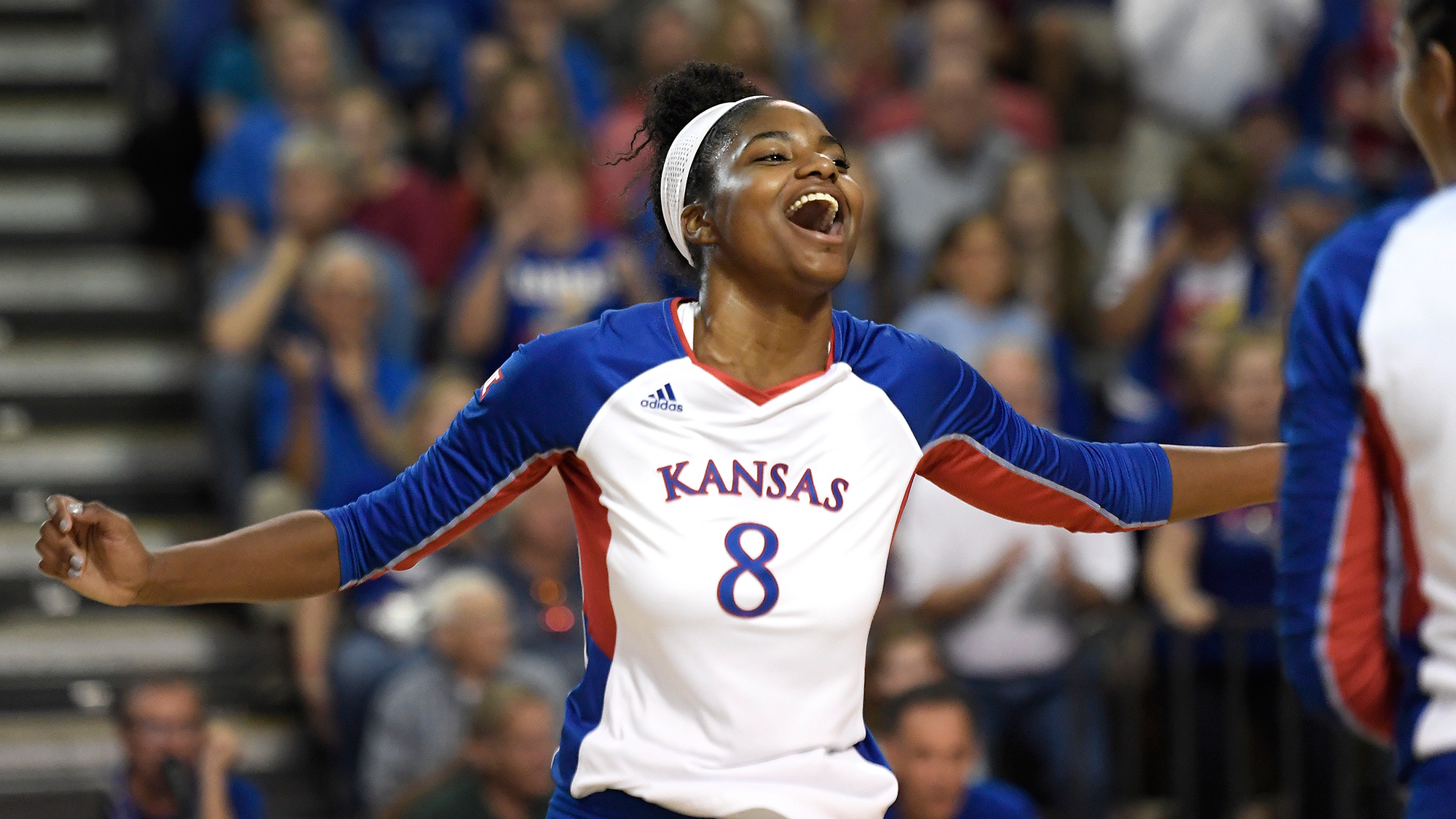 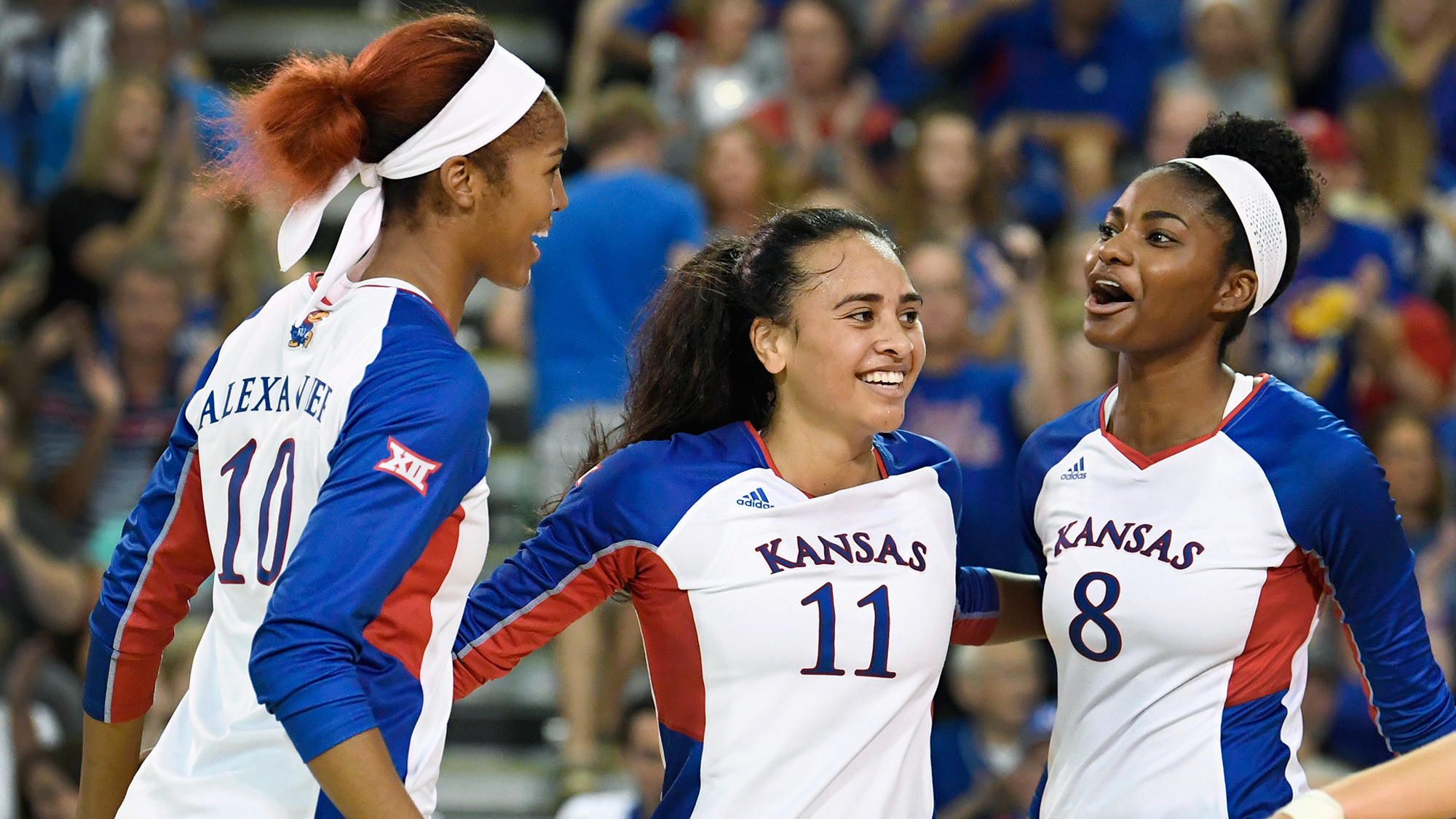 The days of wearing the Crimson and Blue are soon coming to an end for Kansas seniors Taylor Alexander, Addison Barry, Kayla Cheadle, Ainise Havili, Tori Miller, Kelsie Payne and Madison Rigdon. Some of these iconic volleyball players have broken records during their collegiate years. But together, they accomplished what once seemed to be the impossible. These seven seniors were honored last Saturday at their final home match versus West Virginia.

When Havili, Payne and Rigdon began their volleyball careers at Kansas in 2014, the program was in the midst of rising in the rankings. KU made its way into the NCAA Tournament for the third year in a row, but fell in the first round to Little Rock.

Since then, the Jayhawks made a run at a Final Four and won sole possession of their first Big 12 Conference title. The success of the last four seasons was heavily due to the senior class’ abilities and talent.

The Jayhawks had high hopes for this year. They finished 22-7 on the regular season and earned themselves a bid to the NCAA Tournament for the sixth-consecutive year. On Friday, the Jayhawks will take on Missouri in Wichita to refuel an old rivalry in a winner-takes-all match.

Setter Havili was a pivotal piece of KU’s success this season and throughout her collegiate career. She pulled in more awards to add to her already impeccable track record. Earlier this week, Havili was named Big 12 Setter of the Year for the third-consecutive year. She also won Big 12 Offensive Player of the Week accolades for the third time in her career during the week of August 28. Havili is also a three-time AVCA All-American. Havili led the Big 12 this season in assists per set at 11.47 and on October 11, she recorded her 4,801st career assist, breaking the previous record of 4,772 by Andi Rozum (2002-05), making her Kansas’ all-time assists leader.

With such prestigious awards under her belt, Havili has become a household name for Jayhawk fans over the past four years. The current state of the Kansas volleyball program is heavily due to Havili and her talents.

“We were on the rise,” Havili explained. “(We were) slowly getting better and better, but now we’re a national name. When people think of Kansas, they think basketball. But now, they think volleyball too.”

Havili wants her legacy at Kansas to be remembered for her teams’ special accomplishments.

“I want us to be known for hard work. The underdogs coming out and winning where you wouldn’t expect us to,” Havili said.

Fellow senior, right-side hitter Payne, entered the 2017 season as one of the top players in the nation, as reigning Big 12 Player of the Year and a back-to-back AVCA All-America First Team selection. She racked up more awards this season, per usual. Before the start of the season, the Austin, Texas native was awarded Preseason Big 12 Player of the Year for the second-consecutive year. During the week of September 9, she won Big 12 Offensive Player of the Week for the sixth time in her stint at Kansas. Payne holds KU records for career hitting percentage, single-season kills and just broke the record for career kills on Senior Day versus West Virginia.

The legacy Payne will be leaving at Kansas is heavily due to her presence and ability to compete.  She plays for her teammates more so than she plays for herself and that’s exactly what she wants to be known for. While Payne has left her personal mark on Kansas volleyball, she hopes her class has left a memorable impression too.

“I want the legacy that’s left to be that we worked hard and played for each other and left everything we had on the court, as a class. I just want people to be able to say that we gave everything we had for our four years,” Payne explained.

In addition to Havili and Payne, Rigdon, an outside hitter, gathered up awards of her own. Prior to the season, she was named Preseason All-Big 12. The week after Payne won Big 12 Offensive Player of the Week, Rigdon won it for herself for the third time in her career after reaching 1,000 career kills. She went on to win the award for the fourth time during the week of October 23, after recording a total of 42 kills in the two matches played the week prior. In 2016, Rigdon was named All-America Honorable Mention.

In addition to building a resume full of accolades, Rigdon chose Kansas at which to play her collegiate volleyball career because of another reason: The family-oriented culture of the Jayhawks’ program.

“The family aspect of it has really changed the game for me and leaving it is going to be tough,” Rigdon said. “But they have a lot of talent in them for next year.”

The talent of next year’s team Rigdon spoke of comes in the form of Jada Burse and Ashley Smith, younger outside hitters for whom Ridgon has been a role model. Rigdon’s guidance to her teammates directly ties into the Jayhawk volleyball “family” which drew her to Lawrence in the first place.

“I hope I gave a lot of information to Jada and Ashley for them to continue with their careers. Hopefully I just left a good impact (on them) and (showed them) how to play the game that you love with compassion,” Rigdon described.

Earlier this week, Havili, Payne and Rigdon were each named to the All-Big 12 First Team. Having spent their entire careers at Kansas playing in Horejsi Family Athletics Center, it is bittersweet for them to know a new and improved Horejsi is on its way, thanks to generous donors contributing to the Raise the Chant campaign.

This week, the seniors took in what could be their last few practices in their “home” for the last four years. Rigdon reminisced on her time spent in Horejsi when said, “I’ll miss playing there. It’s going to be a new gym and I’m really excited for the others. I’m looking forward to coming back and visiting it.”

The 2017 Jayhawk seniors will lead their team during the homestretch of the season as they aim to take one more shot at bringing Kansas home a National Championship. Kansas has proven it is a force to be reckoned with, as the team continues to show its experience and toughness match after match. The Jayhawks enter this postseason with vengeance and a winning mentality after falling short two years ago in the Final Four to Nebraska.

Although the seniors’ final regular season donning the Crimson and Blue didn’t finish the way they would have liked, don’t count this group out. The road to the NCAA Championship may be a difficult one, but as these seniors have shown throughout their KU careers, anything is possible.