RCW: Once a Jayhawk, Always a Jayhawk: Afton (Sauer) German 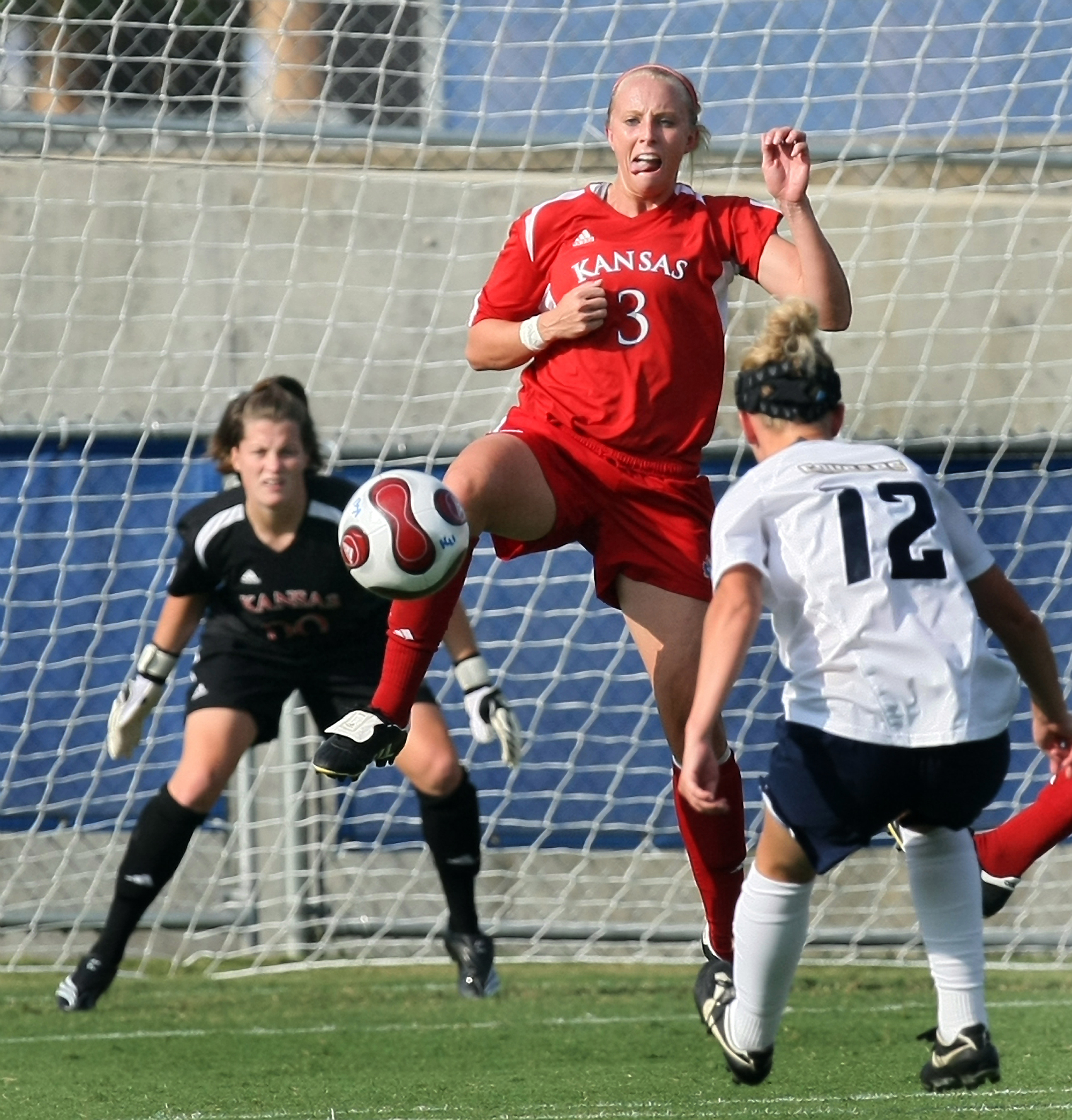 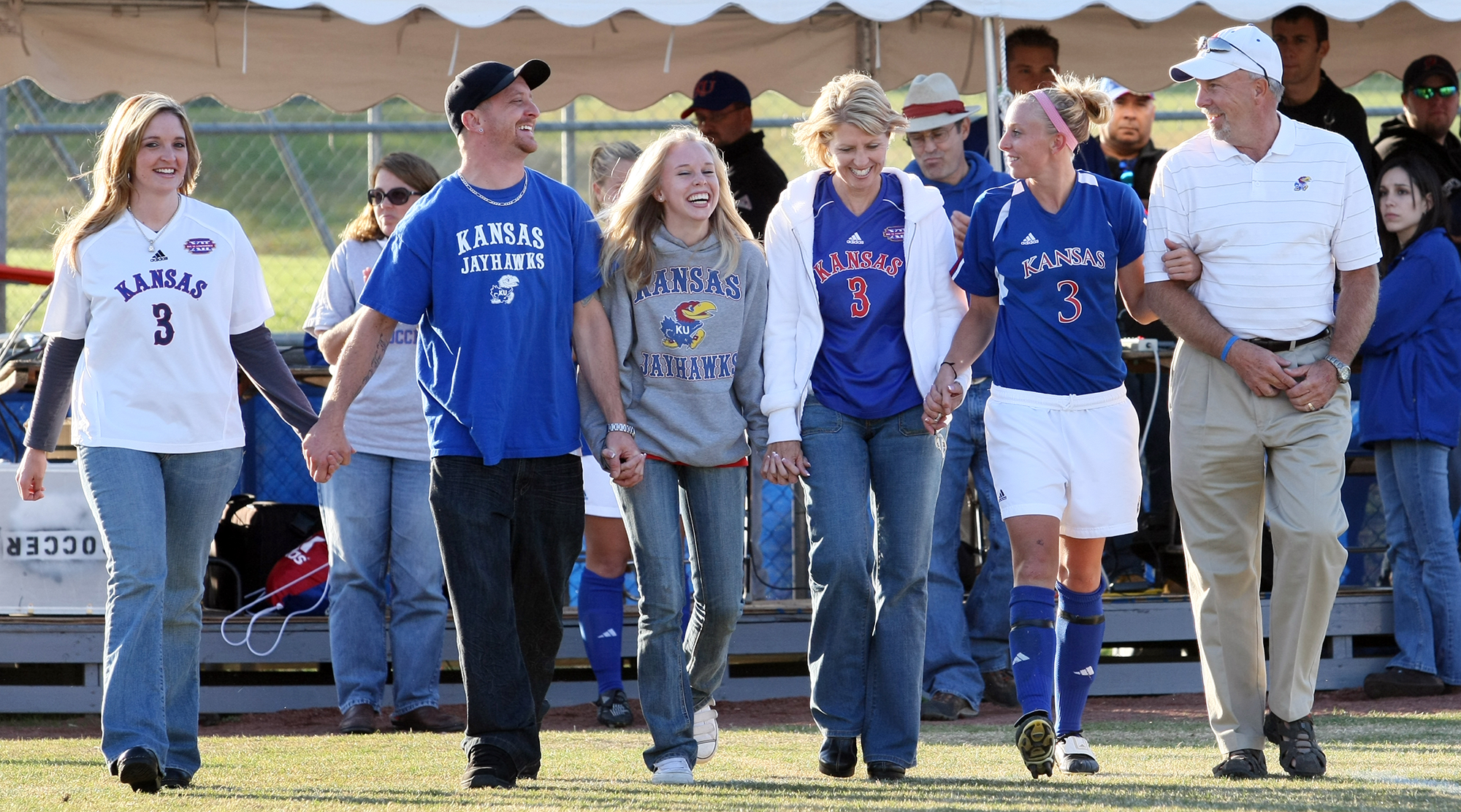 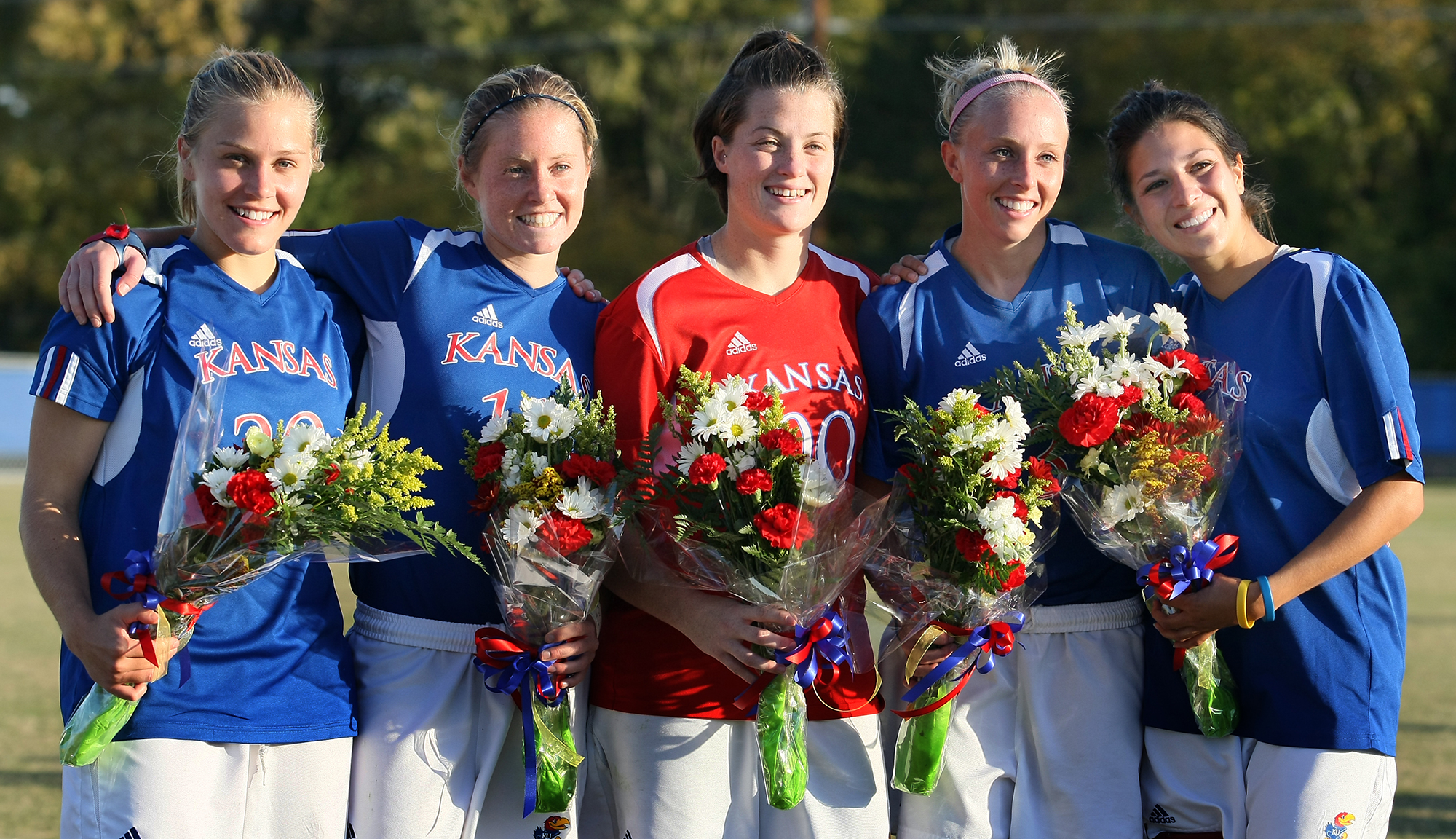 College memories are often cherished by many, but not many of those memories can compare to winning a Big 12 Championship. This is the case for Afton German, formerly Sauer, who was a defender for Kansas soccer from 2004-07.

While earning her undergraduate degree in mechanical engineering, German had a memorable collegiate athletic career, highlighted early in her freshman year when the team did something that had never been done before, and has yet to be repeated, in Kansas soccer history.

“The biggest memory I have from being at KU was when we won the Big 12,” German said. “It was just so exciting.”

German, who returns to Lawrence about once a year, said coming back reminds her of great memories from her time at KU. Even though being recruited by a number of other schools, her first visit was to Kansas. She remembers thinking to herself how there was no way a girl from mountainous Denver, Colorado, would find herself amongst the plains of Kansas.  However, she ended up finding a little bit of solace in Mount Oread.

Throughout her time as a Jayhawk, German was captain of the soccer team her sophomore year and named to the Academic All-Big 12 First Team her junior year. She started all 19 of KU’s matches as a junior and led the team with over 1,742 minutes played.

German was successful on the soccer pitch and achieved success in the classroom at Kansas. However, those were not her only accomplishments as a Jayhawk. Overall, German was a complete powerhouse for the team. She played and started in 83 total games over her four years donning the Crimson and Blue, which ranks tied for ninth in the Kansas career record books for games played, but is tied for first for games started. Over her four years, she scored four goals and recorded four assists, giving her a total of 12 points. German put up 20 shots, 11 of those shots on goal, with one game winner coming in her freshman year against Texas Tech. Additionally, she holds the record for most minutes played by a Kansas soccer player, recording 7,495 minutes.

With all her achievements at Kansas in tow, German took her degree and soccer experience back to Denver, Colorado, after graduation. There, she coached varsity soccer for one year at Valor Christian High School while working at an engineering company called Envision. Still there today, she works on HVAC and plumbing design at schools and is now a project manager at the company.

While she hasn’t been able to find her way back to Lawrence as often as she would like to, German felt nostalgic driving into town with three of her friends from Colorado for soccer’s recent Alumni Weekend.

“It’s just surreal coming back and (thinking), ‘Oh my gosh’ because there’s quite a bit that’s the same, but there’s a lot of stuff that’s so different (at KU),” German said. “It just brings back a lot of great memories.”

Memories that include her teammates, women she hasn’t been around since her time at KU. German said they all came back for Alumni Weekend (October 6-8) that produced one of the most family oriented turnouts. While it wasn’t the largest Alumni Weekend KU soccer has had, the attendance record for the highest-attended NCAA DI women’s soccer match ever held in Kansas was set that weekend, with 2,514 in the stands at Rock Chalk Park.

“It’s been amazing,” she said of seeing her college teammates and friends. “A lot of us haven’t seen each other for five or six-plus years. We come back and it’s like we haven’t missed a beat.”

At the October 6 game vs. in-state rival Kansas State, German was impressed with the updated technology and facilities that the soccer team now has. The idea of sitting at Rock Chalk Park watching a game, in a real soccer stadium, wasn’t even a blip of an idea while she was on the team. Seven years passed after German graduated before Rock Chalk Park opened.

German said that the KU teams over the years have each formed a special bond — just as any team would, but mainly due to their coach and the lessons he taught his pupils.

“(Head coach Mark Francis) was really big on our team being a family and I think that was one of the biggest things I took from it. I don’t think I realized at the time how important that was. He did a really good job of keeping us all together,” German explained. “A lot of head coaches separate themselves and he’s not like that. He was always there for us, for everything.”

The 2017 season has marked Francis’ 19th season at the helm of the Kansas soccer team, which also saw his 200th career win with the Jayhawks. German has continued to follow the teams’ success since she graduated because she knows that being a Jayhawk is something not many can compare to.

“When I’m in Denver, we all still go watch the basketball games,” she explained. “We’re always big fans, always supporting, someone always says something to you. Being a part of the Jayhawk family, you always just feel a part of something (amazing).”