RCW: Once a Jayhawk, Always a Jayhawk: Katie Martincich 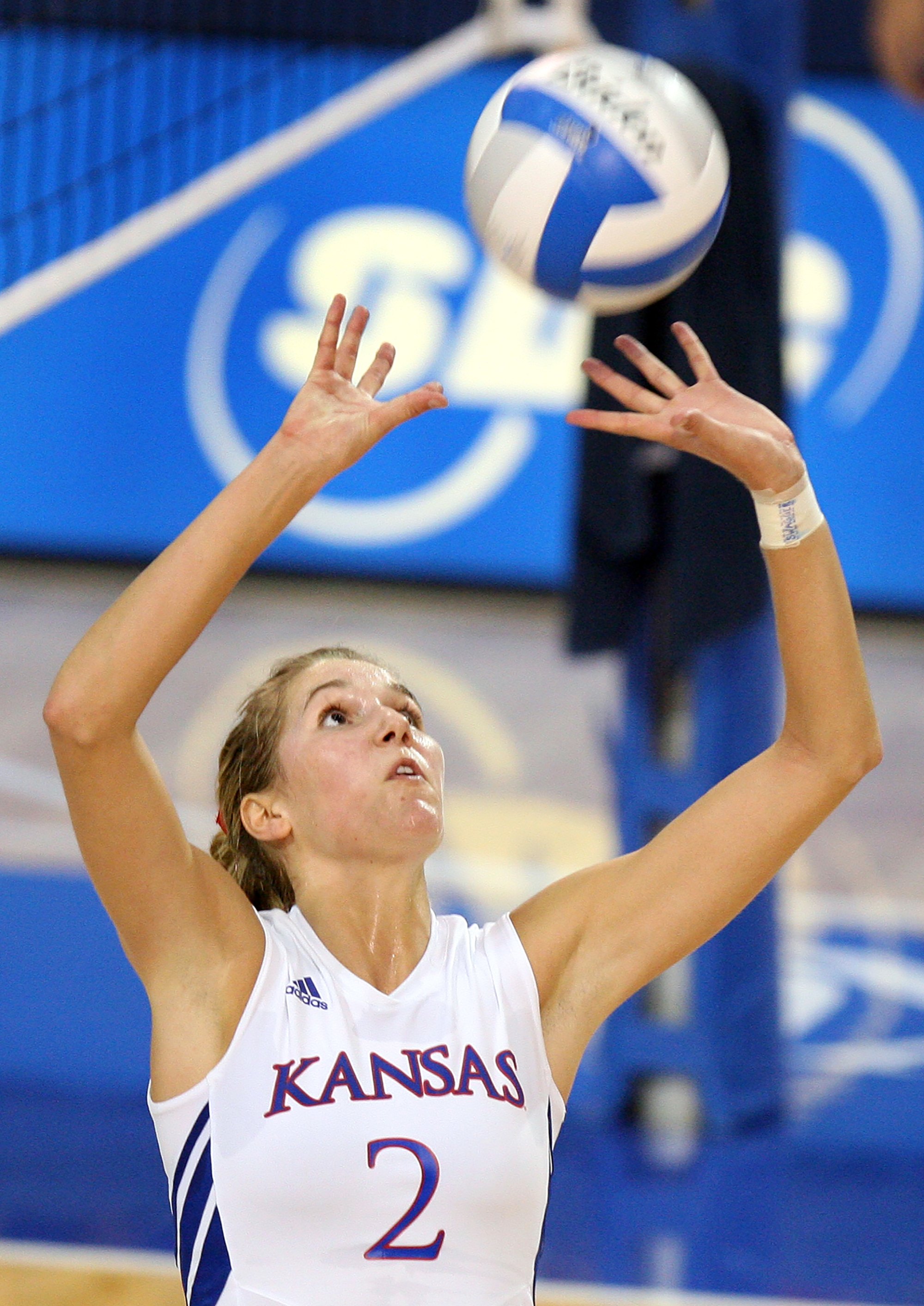 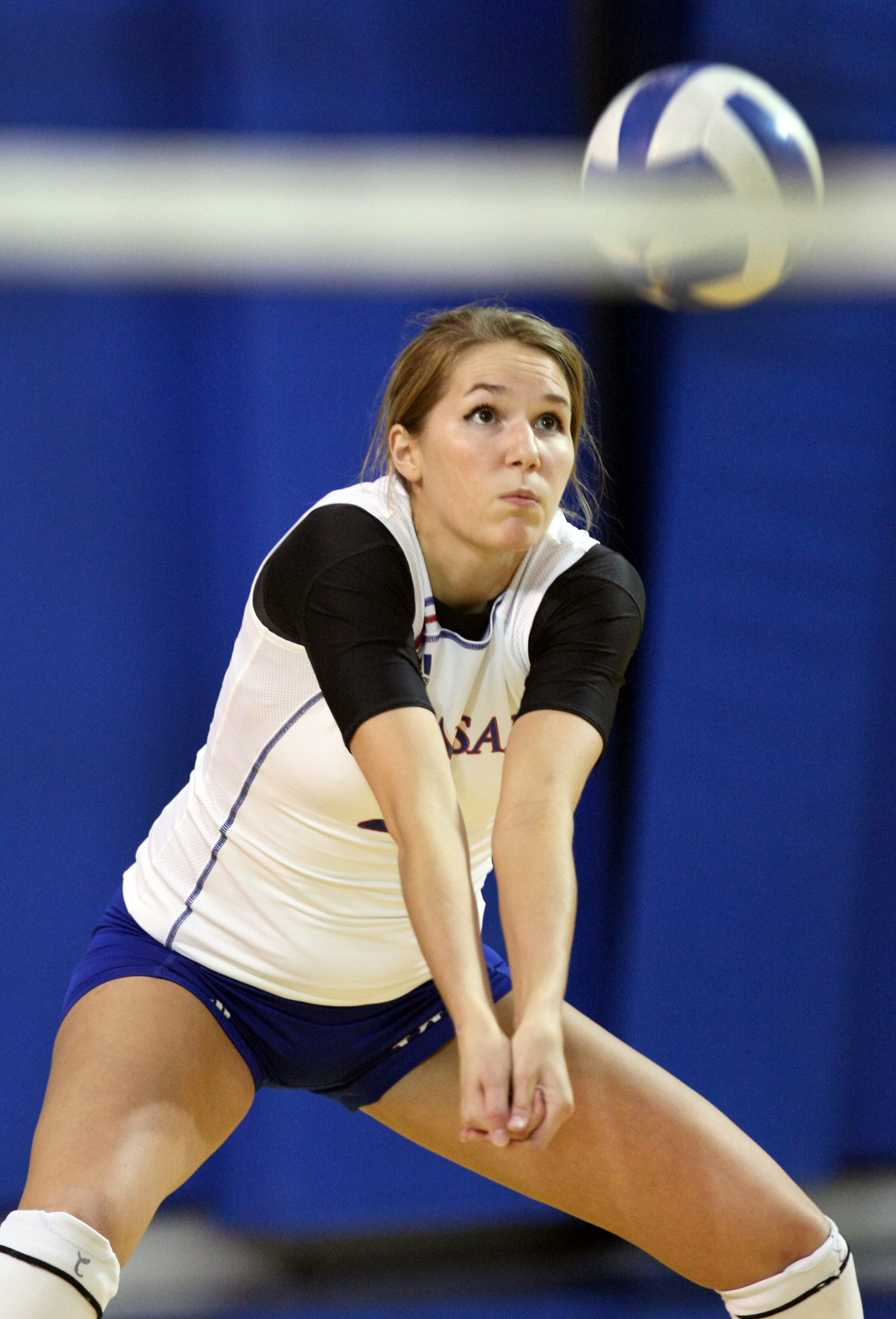 Her family’s connection to volleyball prompted Martincich to consider playing the sport when she was very young. After playing competitively for numerous years when she was a freshman in high school Martincich began to think she might be able to play volleyball for Kansas.

“In high school I had some great coaches who helped me start to develop into the player I knew I could become,” Martincich said. “I knew my freshman year that I wanted to play in college. I wanted to play at KU, but my position is so specific and they do not recruit setters every year, so I knew it would be a ‘fate’ thing if it worked out.”

She continued, “I think being around the game and being able to connect with my family members on that level definitely made it more relatable, and easier to pursue. The exposure to the game at a young age played a part to my dream.”

Martincich had a distinguished four years playing volleyball at Bishop Miege High School in Kansas City, Kansas.  Martincich’s teams won three-straight state championships her sophomore to senior seasons. In 2004, she was the Gatorade Player of the Year in the state of Kansas and a year later, in 2005, she was named The Kansas City Star Female Scholar-Athlete of the Year. After her remarkable high school career, Martincich was ready to move onto the next step in her athletic career.When Martincich became a Jayhawk herself, she added to the family legacy of going to school at Kansas, the very same one she had rooted on for years just down the road in Kansas City.

“I grew up watching and going to games since I was three years old. My parents and older sisters all went to school at KU,” Martincich explained.

Martincich, who was on the volleyball team from 2005-09, redshirted her first year at Kansas in the fall of 2005, but was still able to practice and travel with the team. She found her redshirt season difficult, but believes she gained important experiences during that time.

“It was hard for me to keep the competitive side of me in check when I wasn’t playing in any games, but it opened me up to the culture of Kansas Athletics,” Martincich said. “Not playing my first year helped with balancing being a college student-athlete, my friendships and family. My first year of (school, when) not playing helped me balance all of those areas and also opened the door to community service opportunities.”

The following year, Martincich started in each of the team’s 29 matches as the team’s setter. During that redshirt-freshman season, she set a new Kansas freshman record of 1,193 assists.

“I think setting that record was a great confidence builder for me,” Martincich said. “After a year of redshirting, I was eager to compete, but I also had some nerves and uncertainty that went hand-in-hand with that excitement. Setting that record was a tribute to the year I spent learning from the starting setter when I came to the team, Andi Rozum, setting our practice squad and building trust and confidence with my hitters during that redshirt season.”

Growing up as such a huge Kansas Athletics fan, Martincich’s favorite Jayhawk was basketball player Jerod Haase (1993-97). His tenacity on the court, and academic achievements off of it, helped Martincich believe she could perform on the court and in the classroom as well as Haase himself, as well as countless other Kansas student-athletes had done before her.

In 2007, Martincich won the Big 12 Sportsperson of the Year award. The Big 12 Conference chooses one female and one male student-athlete each year for this accolade from all of the league schools. To be eligible for this prestigious award, someone from each university must first nominate a student-athlete for them to be in consideration. Being nominated for the award by someone within Kansas Athletics meant more to Martincich than if she would have been chosen by someone from the Big 12 Conference.

“It was special to be up for the award, as someone from Kansas Athletics first had to nominate me to be up for consideration,” Martincich said. “I felt extremely grateful that KU believed in me so much to represent the school. When I heard that the Big 12 had chosen me, out of all of the nominees, it was one of the proudest moments I have ever had. It was a milestone I can always look back on and be proud (that) I have.”

At the end of her junior season in 2008, Martincich reached another milestone by moving into seventh place on the Kansas all-time assists list. Martincich’s talents as a setter helped solidify what she knew her role could become for the team.

Martincich continued to earn more accolades after winning Big 12 Sportsperson of the Year. She was on ESPN The Magazine‘s All-District Third Team in 2007 and made the Academic All-Big 12 Team in 2007-08.

Martincich was not just a stellar athlete and scholar while at KU; she was also involved in many different community outreach programs. She volunteered for Habitat for Humanity, Susan G. Komen and the National Girls and Women in Sports Field Day Celebration.

“I went to Catholic school my whole life and we did service hours, which was an expectation in the Catholic upbringing,” Martincich said. “I did not realize how many opportunities they had at KU. I have always felt better about helping (others) and (it) makes me feel fulfilled to be able to do so. It was a part of what I did growing up, so it was cool to keep going on with that.”

“We were looking for different ways to get as many student-athletes involved as possible,” Martincich recalled. “We tried to think of different scenarios to get 100 KU athletes and 100 Special Olympians involved. We came up with bowling because it could be something just for fun. We tried to make it so we had a fun atmosphere where every lane had two or three KU athletes and two or three Special Olympic athletes. To be able to see the Kansas athletes compete with the Special Olympians was really cool. Everyone was on an even playing field.”

After graduating from Kansas in May of 2010 with a degree in Sport Management and Marketing, Martincich went into coaching. She coached for her former club team, KC Power, as well as at Wake Forest for one year. Martincich used her own experience as a Division I athlete to help the club team members find a school that felt best for them while coaching the Power for four years.

Today, Martincich is the Chief Marketing Officer at Charlie Hustle, a company based out of Kansas City that sells vintage t-shirts, which partners with Kansas Athletics as brand ambassadors.

“To be partners with KU is amazing,” Martincich gushed. “To be able to put KU products out in the market and get KU fans excited about the particular products hits a little bit closer to home. To be able to bring some of those ties together is cool.”

As she did throughout her childhood and prep years, Martincich continues to believe that Kansas is truly a home to her and that being a Jayhawk forever is special.

“It validates my decision to love and care for the university,” Martincich said. “I gave a lot of time and energy and worked hard to better the (volleyball) program. People, whether I knew them or not, respect the alumni. They welcome them with open arms and try to help them feel valued and respected.”

Martincich went on to explain how that respect applies to all Jayhawks when she said, “The female student-athletes, too. There is empowerment that comes with that. KU treats their athletes with such great respect. Whether male or female, they want to help each student-athlete grow to be better people. I do not think every university does that and it makes KU special.”