RCW: Once a Jayhawk, Always a Jayhawk: Linda Ellis-Sims 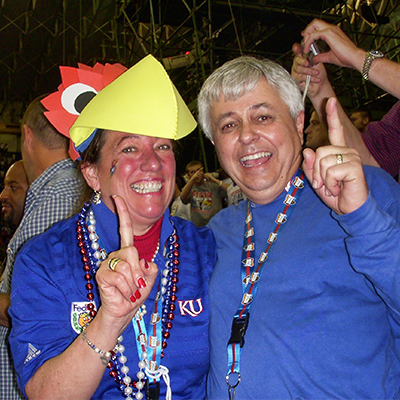 Dr. E.L. Saunders started to grow anxious. He had a patient in labor, but the veteran practitioner’s anxiety did not stem from her. It originated from the tickets in his pocket and grew stronger with the ticking of the clock. Finally, at 10 in the morning, a beautiful baby girl was introduced into the world. As the parents took their new child home, Dr. Saunders raced from Independence, Missouri to Lawrence, Kansas. The KU alum settled into his seat at Memorial Stadium just as Kansas kicked off against the No. 1-ranked Oklahoma Sooners on a sunny October Saturday in 1956.

Though Kansas lost to eventual undefeated national champion Oklahoma, 34-12, the Jayhawks gained an important victory for the program, just not in Lawrence. It was a victory aided by Dr. Saunders, who had delivered a baby named Linda Ellis, now Linda Ellis-Sims, just in time to make it to the football game. Just like she helped her doctor make it to KU by game time with her timely birth, Ellis-Sims has dedicated her life to supporting the University of Kansas and Kansas Athletics and helping Jayhawks navigate their way to their nest in Lawrence.

Ellis-Sims spent her childhood in Independence, Missouri. Though her parents did not attend college themselves, they always placed a priority on education. Ellis-Sims gained an appreciation for math and science while achieving academic success in high school. An athlete in high school, Ellis-Sims also developed a strong passion for sports. Both of her interests factored into her decision to attend the University of Kansas.

“When I was getting out of high school I thought I wanted to be a chemistry major,” she said. “Somebody suggested chemical engineering and I thought that I could try that since the job market was so much better for engineers than chemistry majors. Kansas had a great engineering program and if I didn’t like engineering they had a great business school, a chemistry major, anything else I could’ve chosen was there. It was an hour from home and travel was super easy. The thing that really sold me on it was the chance to swim for KU. Back then there were no scholarships (for women’s swimming) but it was still a chance to be competitive and swim on a team.”

What sealed the deal for Ellis-Sims was a trip to Robinson Natatorium. The ceramic Jayhawk overlooking the diving well impressed a teenaged Ellis-Sims enough to persuade a commitment out of her.

“The big tile Jayhawk is just fabulous,” said Ellis-Sims. “It was the coolest thing I’d ever seen.”

Ellis-Sims would see the Jayhawk adorning Robinson Natatorium many times during her freshman and sophomore years after she joined the inaugural Kansas women’s swimming and diving team. A true student-athlete, Ellis-Sims balanced the demands of the swim team while majoring in chemical engineering. During both of her two years on the swim team, the Jayhawks finished first in the Big Eight Conference under head coach Clair McElroy. Ellis-Sims contributed on the relay teams and swam  the 200-yard butterfly, in which she left the team as the school record holder.

“You can have a school record when it’s the first year of the program and no one wants to swim the 200 butterfly,” said a chuckling Ellis-Sims.

The introduction of scholarship student-athletes to the women’s swimming and diving program after Ellis-Sims’ second year forced her to evaluate her status on the team. Though she thoroughly enjoyed her time on the team, Ellis-Sims decided it would be better to shift her focus to her studies. She would continue her involvement in Kansas Athletics, though, as a photographer.

“(Former Kansas linebacker) Terry Beeson studied petroleum engineering,” Ellis-Sims said. “After I quit swimming, I did a lot of photography because there was lab in the engineering building you could use to develop your photos. Terry gave me sideline access at football games. It was a lot of fun hanging out and doing that.”

As she transitioned into an upperclassman, Ellis-Sims discovered a new passion that would alter the direction of her career. She found her passion sitting in Summerfield Hall, which at that time was KU’s business building.

“Somewhere around my sophomore year I realized I really liked business because I was in a class with discounted cash flows, internal rate of return, etc., and I really liked it,” said Ellis-Sims. “I looked at the economics of switching into business, and it would have been the worst business decision I could have made.”

“One of the things I liked best about (ExxonMobil) was that you had to have an engineering background because you worked a lot with refining and chemical processes,” she said. “You needed it so that you could translate what was happening with the plant operations to customers, who were also engineers, as well. It was a unique opportunity to blend my engineering background with my passion for business.”

Starting her career as a sales representative and working her way up to a global account executive in charge of North American Base Oil sales, Ellis-Sims demonstrated the skills she developed as a student-athlete at Kansas on her way to building a successful 33-year career at ExxonMobil.

“The focus you had to have just to get everything done, all the things you hear athletes, later in life, say really helped them learn how to balance work, academics and athletics,” Ellis-Sims said. “I learned a lot of great skills like that, which turned out to be beneficial.”

Ellis-Sims’ position required her to travel quite a bit, something she took a liking to and would incorporate into her later life. One of her extended stops was in Memphis, where she obtained a Master’s degree in Finance, Insurance and Real Estate from Memphis State University, currently known as the University of Memphis. Despite her degrees from the two schools, Ellis-Sims makes it clear there was undoubtedly only one she was rooting for in the 2008 men’s basketball national championship game, the Kansas Jayhawks.

Throughout Ellis-Sims’ travels, she has always maintained a connection to Lawrence. Whether through the KU Alumni Association, the School of Engineering Advisory Board, K Club or the Williams Education Fund, Ellis-Sims has regularly found ways to give back to the university she loves so much. She has also spent time on various other boards affiliated with KU dedicated to everything from chemical and petroleum engineering to KU’s diversity on campus. For her efforts in forwarding the university, Ellis-Sims received the highest honor given by the KU Alumni Association, the Fred Ellsworth Medallion, in 2011.

“Coming from my background where neither of my parents went to school, there are so many first-generation students today who we’ve been able to help get some scholarships,” said Ellis-Sims. “It’s been fun to be able to participate and serve on different boards, whether it be the School of Engineering or Endowment, as long as I can be a contributor and help move KU forward.”

Anyone who meets Ellis-Sims would agree that her passion for the University of Kansas is infectious. No one knows that better than her husband, Russ Sims. Through their shared interests of college sports and traveling, Ellis-Sims was able to convert her husband into a die-hard Jayhawk fan. The pair spent the beginning of their marriage in Houston and made many trips over the years to Lawrence to watch football and basketball games, occasionally making the trips on motorcycles.

“We met while we were riding motorcycles,” Ellis-Sims said. “He was always a college sports fanatic, particularly basketball. If I was on my own in Houston, it would have been hard to make it to Lawrence for as many games as I did. The fact that he likes it so much, we went ahead and kind of planned our lives around KU sports. He loves KU and wears the Jayhawk really well.”

Together, Ellis-Sims and her husband have gone on some incredible trips on their journey to support Kansas Athletics. Ellis-Sims counts the 2008 Final Four in San Antonio, the 2008 Orange Bowl in Miami and the 2015 World Games in South Korea among her favorite travels. An avid supporter of all KU teams, Ellis-Sims has been able to show her support for KU’s other teams since her move back to Independence nine years ago and her retirement five years ago. Like a true Jayhawk, she made sure to time her retirement to occur right before the 2012 NCAA Tournament so that she could devote the first month of her golden years to Kansas basketball.

Fans of all of Kansas’ teams have probably seen Ellis-Sims at a Kansas Athletics event. In addition to watching games in Lawrence, Ellis-Sims has also made it a point to travel with as many teams as she can. This past academic year has seen her travel to Stetson University in DeLand, Florida to support the softball team and walk with the men’s golf team in Palm Desert, California.

Ellis-Sims’ passion for Kansas has permeated all facets of campus. From athletics to academics to campus life, Ellis-Sims has affected almost every aspect of the KU experience. The Class of ’79 alum has been thrilled to see the evolution of the university and is excited by the plethora of construction projects on campus. 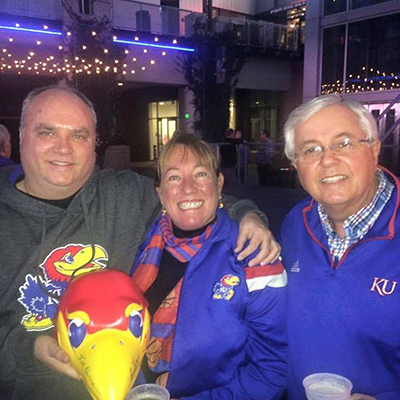 “It’s unbelievable what KU has been able to accomplish under Chancellor (Bernadette) Gray-Little, a lot of it funded by philanthropic gifts that KU Endowment is charged with raising,” Ellis-Sims said. “A lot of people believe the university is heading in the right direction and are willing to give up their money to make that happen. The new business school is phenomenal and we have top-ranked programs in so many places. It’s amazing to see.”

A particular area of focus for Ellis-Sims has been helping both students and student-athletes receive financial aid to attend KU. She knows the value of a degree from the University of Kansas and is determined to help as many people as she can reap the benefits of being a Jayhawk.

“I think KU gave me the life experience, with athletics being a big part of it, to be successful in the world,” explained Ellis-Sims. “I use that every day and that’s what allowed me to accomplish what I have in life. If I can do anything to help future students, that’s behind my motivation to take what KU gave me and pay it forward.”

Just like she did with her first breaths, taken with just enough time for Dr. Saunders to rush to Memorial Stadium, Ellis-Sims’ life has been dedicated to helping people find their way to Lawrence and becoming what she believes to be the best thing on earth, Jayhawks.

Once a Jayhawk, Always a Jayhawk