RCW: Once a Jayhawk, Always a Jayhawk: Maggie Hull-Tietz 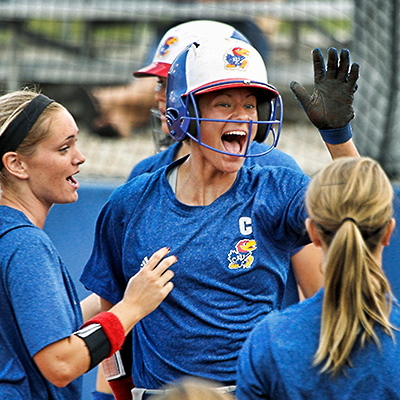 Learning the Rock Chalk Chant is one of many traditions University of Kansas students all look forward to in their early years of college. But for third-generation Jayhawk Maggie Hull-Tietz, learning the chant at a very young age was one of her first memories as a Jayhawk.

“I was definitely raised a Jayhawk through and through,” said Hull-Tietz. “When I was 10, we moved into a house off of University Drive – I literally grew up on campus.”

Hull-Tietz’s grandmother graduated from KU. Her dad has his undergrad and Ph.D.,  from KU, and she is one of four Hull children who graduated from Kansas. One of those siblings being her twin sister, Rosie.

It was a no-brainer as to which college they would attend after graduating from Free State High in Lawrence. But the twins shared a love for something other than the school, they shared a love of the game of softball.

When it came down to the decision-making process of where Hull-Tietz would commit, she remembers comparing every school she looked at to KU. She said it was without a doubt her dream school and she couldn’t imagine her college experience being anywhere else.

Hull-Tietz laughs while reminiscing on her thought process on where to take her athletic career next.

“Wearing the Kansas jersey,” Hull-Tietz said. “That was my favorite thing. Knowing that I had the opportunity to represent the University of Kansas across my chest on that softball field meant everything to me.”

Hull-Tietz earned a laundry list of accolades during her four years on the softball diamond and in the classroom, which are all outlined in her final KUAthletics.com BIO following her senior season.

But it wasn’t until her senior year that she realized she could take her career even further than donning the Crimson and Blue.

“I didn’t learn that I had the opportunity to play professional softball until the week of the National Pro Fastpitch League (NPF) Draft,” said Hull-Tietz. “I was an outfielder from Lawrence, Kansas. Playing for a league like that had just never crossed my mind.”

Hull-Tietz graduated from the William Allen White School of Journalism in May of 2013, double-majoring in news and information and Spanish. Writing had always been a passion of hers and she was so intrigued by the Spanish language that she decided to take on both loads. She does remember, however, that she was kind of at a crossroads on what she wanted to do in that field post-graduation. That was until the NPF Draft.

“When I found out about my opportunity to play professionally, I was also planning a wedding,” said Hull-Tietz. “I thought, ‘We’ll see where this takes me’ and started thinking about the next phase of my life in terms of that.”

That summer was a whirlwind of emotions for Hull-Tietz. She got married, went on her honeymoon and moved to Chicago to play for the Bandits, one of six teams in the NFP league. Since the season was in the summer, she only spent three months there until moving back to Lawrence in September of 2013.

At that point in time, Hull-Tietz had to make a decision on whether or not she would continue to play for the Bandits for another season. By the time she came back to Lawrence, so many opportunities had fallen into her lap that she decided that her first professional season would also be her last.

“When I came home, I was doing some freelance writing and private coaching,” said Hull-Tietz. “Then I was offered an assistant coaching position at Baker University. That was my first step into the other side of college athletics.”

Hull-Tietz took the assistant coaching position and rode it out for a season. She then got the chance to go on staff with the Christian ministry, YoungLife. It was here where she was able to pursue her passion for ministry, as well as discover some of her new desires.

“I was able to learn that I had passions for things like event planning, organization and meeting with people,” said Hull-Tietz. “It’s interesting because when I look at my job now (Director of Operations for Kansas softball), it’s a mix of both indirectly coaching and my writing, event planning and people skills. Those elements are all very much a part of my job today.”

Everything Hull-Tietz found interest in came full circle with her position as the Director of Operations for Kansas softball, which she started in July of 2016. When this particular opportunity came about, it was almost like a hybrid of everything Hull-Tietz had done, and had enjoyed professionally, up to this point in time.

“It’s been so cool how God has provided a position like this for me,” said Hull-Tietz.

Now sitting as the Director of Operations for Kansas softball, Hull-Tietz reflects on her time as a student-athlete for KU just a few years ago. She recalls the time that she spoke at a city council meeting on behalf of the construction of Rock Chalk Park.

“When I played here, we did not have the same facilities,” said Hull-Tietz. “I spoke on how much a facility like this would do for future athletes. I got to help be a part of rebuilding this program and I am forever thankful for that.”

Hull-Tietz hopes to set an example for women athletes to both be thankful for what they now have and to recognize what it took to get them there. Being a Jayhawk has instilled more than just pride for Hull-Tietz, and she hopes that rubs off on all other student-athletes fortunate enough to play at a school like KU.

“When I hear ‘Jayhawk’ there’s so much emotion that comes with it,” said Hull-Tietz while admiring her K Ring. “I wear this as often as I do my wedding ring. When I look at this ring, I see all of the blood, sweat and tears I’ve poured into this school as a softball player, a student and now, as a faculty member.”

To Hull-Tietz, the ring symbolizes how the University of Kansas is a big part of who she is today.

“This is just one of the reasons they can’t get me to leave,” said Hull-Tietz with a laugh. “I’m just so engrained into this University. I take so much pride in the school and my job and being a part of the tradition, the passion – it’s so much more than the game of softball for me.”

To reiterate how Hull-Tietz can’t seem to stay away from the University, in addition to accepting the position as Director of Operations in of the summer of 2016, she has also started her online Master of Business Administration (MBA) through KU.

She admits that her career climb may be different than most in the collegiate athletics world because she doesn’t ever want to leave KU.

“I would love to stay here as long as possible, in whatever role that looks like,” said Hull-Tietz. “I’m excited to see what this educational opportunity will provide, and to see my future progress within KU’s athletic world.”

The love for the University of Kansas has not died down for Hull-Tietz, but rather grown even stronger as the years have passed. From participating in the many traditions in her childhood, to representing the school as a student-athlete, earning her undergraduate degrees, and now being on the other side of athletics, Hull-Tietz emulates the saying, “Once a Jayhawk, Always a Jayhawk.”