RCW: Once a Jayhawk, Always a Jayhawk: Nora Koves 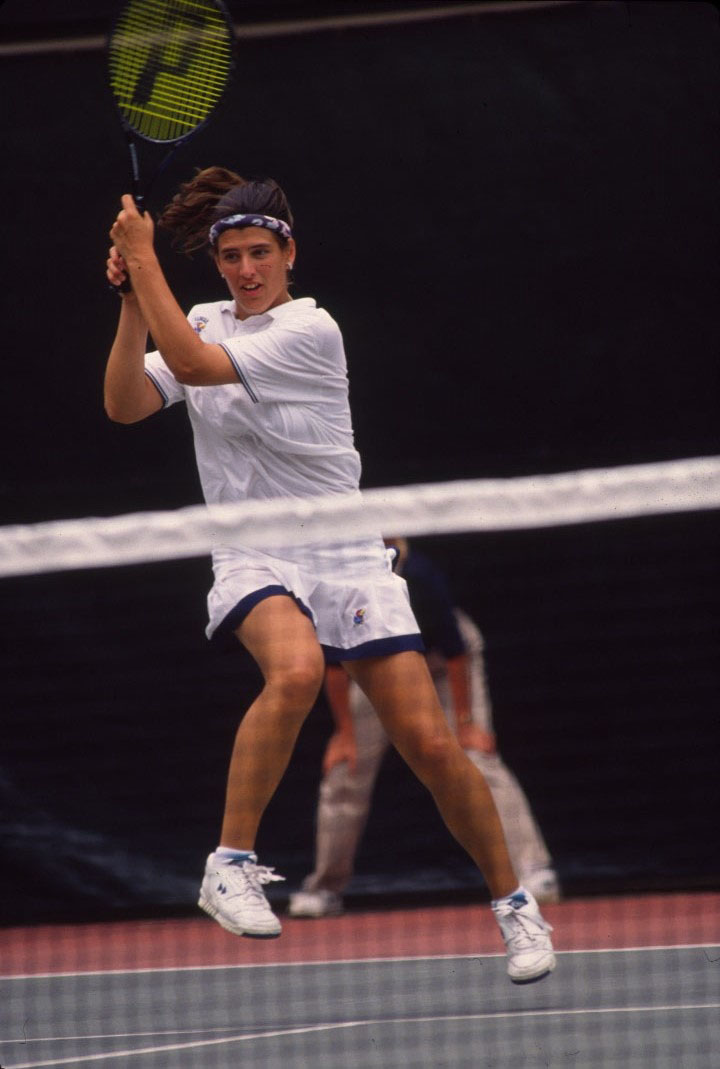 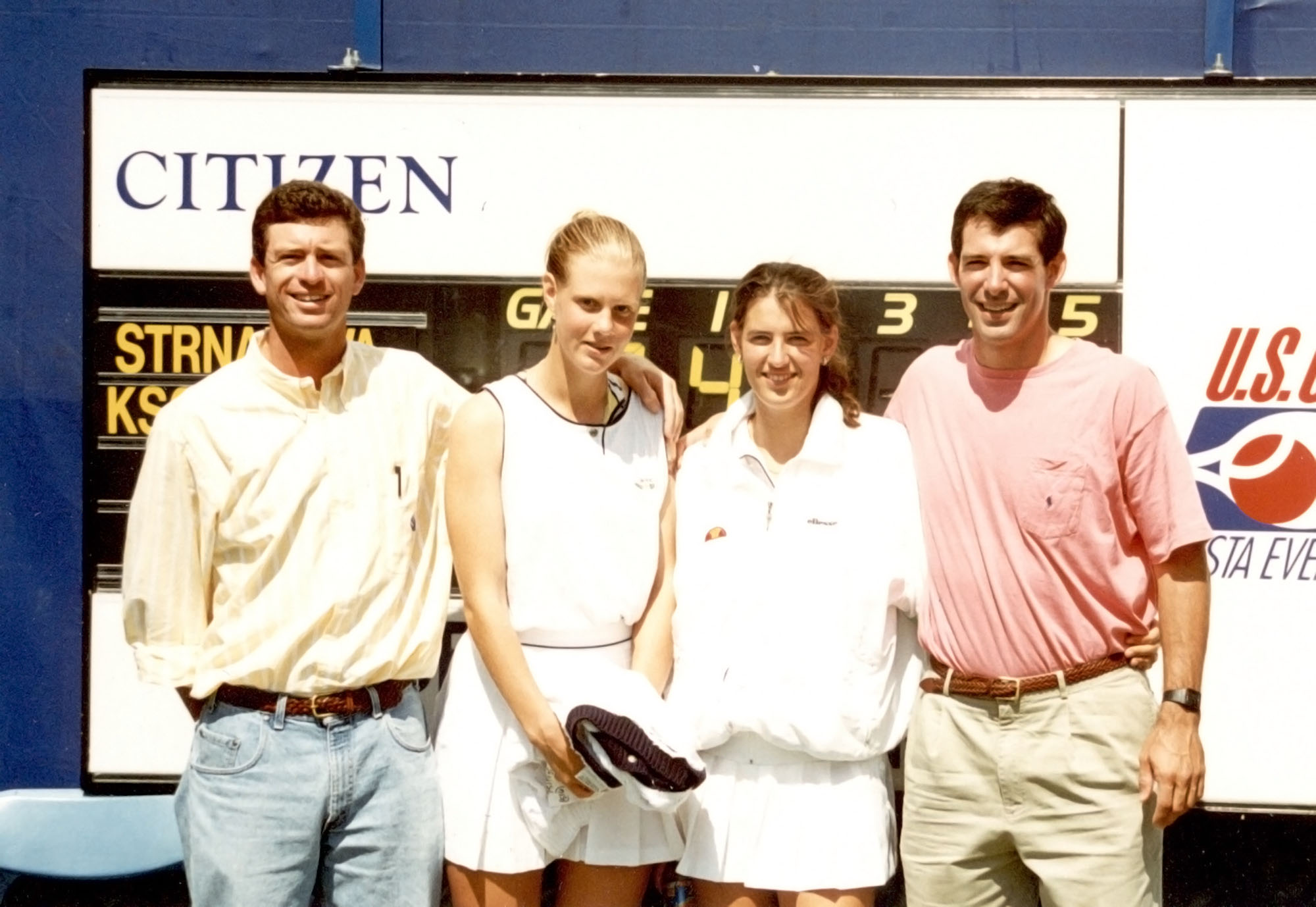 Women’s tennis was not a sport at the University of Kansas until 1975. In 1976, it became an intercollegiate sport. In the 1981-82 season, it became part of the NCAA. However under the NCAA umbrella, KU did not have sustained success in the program until the 1990s, with the arrival of a special class of freshmen.

During the 1991-92 season, the Jayhawks had their best season to date. The Kansas women’s tennis team won the Big Eight Championship for the first time since 1979 and second time in school history, participated in its first NCAA Tournament, and ranked as high as 17th in the nation.

What also happened during the 1991-92 season was the arrival of freshman Nora Koves from Budapest, Hungary, who was about to change the women’s tennis team, and definitely for the better. She won, in both singles and doubles, several championships in Hungary in the U14, U16 and U18 category. She was ready for the world of college sports in the United States.

Her journey to become a Jayhawk was a little bit turbulent. Koves wanted to play tennis and go to college, which is hard to accomplish in Europe. As she had this realization, Koves knew that she wanted to come to the United States to achieve her goals.

Koves’ brother, who played tennis at Ohio State at the time of her recruitment, told various Big Ten Conference coaches about her performance in the Hungarian circuit. Notre Dame’s head coach took interest, but the Fighting Irish had no scholarships to offer at the time.

However, the Kansas coach, Michael Center, was good friends with the Notre Dame coach, who gave Center a good recommendation for Koves.

“Michael Center called me up from the States and I was in Hungary and he just said, ‘Would you like to come to Kansas?’ and I said, ‘Yes’ and that was it,” Koves said. “I had never been to the States before, I didn’t even know where Kansas was. I hung up the phone and went to a map to see where Kansas was.”

On her way to the United States, someone asked Koves during her flight to Kansas City what university she was going to go. She was a little bit confused.

“I’m thinking to myself, ‘Oh my God, there is more than one?’ and I told them, ‘I have no idea, I was told to go to Lawrence,'” Koves said. The other passenger was readily able to tell she was going to be a Jayhawk.

When Koves arrived, she had to deal with a new challenge: how to acclimate herself to American culture. While she was homesick sometimes, and cultural differences were many, she was able to handle herself between the help of her teammates, but most importantly, Coach Center.

“He made sure I felt at home and I could find my way around on campus,” said Koves. “He was taking really good care of me. He really helped me through these difficult times of transition and if I was homesick he would help me balance my European life to my American life.”

Even through there were difficulties, Koves knew she was part of something special.

During her freshman year, Koves was teammates with Eveline Hamers, a four-time All-American and Intercollegiate Tennis Association (ITA) Central Region Player of the Year in 1992. The duo went undefeated in doubles in the Big Eight that season while Koves posted an overall record of 38-5 in singles. Behind Hamers’ experience, she set the stage for Koves to continue to help the program grow during her time as a Jayhawk.

Expectations for Koves were high. She was ranked 26th in the ITA preseason poll in the 1992-93 season. Chuck Merzbacher, the new head coach after Center moved to another position at Kansas, knew that Koves was going to develop even more, both in regards to the team and herself. Prior to that season, he said Koves had a great freshman year that would be vital to lead the team to greater accomplishments. Not only that, but that she was looking like an All-American.

Merzbacher was right in both instances. The success of the Jayhawks kept increasing and Koves was stealing the show. In Koves’ sophomore season, the Jayhawks defended their Big Eight Championship and earned another bid for the NCAA Tournament. Koves was indeed an All-American that year, after a spectacular performance in the NCAA Tournament doubles event, where she and her partner, Rebecca Jensen, placed fifth in the nation. They lost to the Texas duo of Gilchrist and Paynter, 6-3, 6-2. Koves finished her second season undefeated in Big Eight singles-match competition.

Koves’ ceiling was higher than that, though. And her 1993-94 season was going to prove it.

The Jayhawks started the year ranked No. 15 in the country after coming from a phenomenal season the previous year. Before the season started, Merzbacher said he believed Koves would be an All-American in both singles and doubles by the end of the year, and that she was “as dangerous as anyone in the country.”

Merzbacher knew his student-athletes very well because the 1993-94 season was, once again, the Jayhawks’ most successful for the program. First, the team success: first NCAA doubles championship in school history; deep-run in the team event at the NCAA Tournament (making it to the quarterfinals); competing in the National Team Indoors Tournament semifinals; a third- consecutive Big Eight Championship – fourth in the school history; and ranked seventh in the nation.

Following in their footsteps of the previous season, Koves and Jensen found themselves in the NCAA doubles lineup. The duo, who began the year ranked as the No. 2 team in the nation, won the championship, 6-4, 7-5, against Boungnol and Piquemal of Ole Miss.

During her junior season, Koves made it to the round of 16 in singles at the NCAA Tournament, was a member of the Rolex Collegian All-Star Team, was named the Big Eight co-Player of the Year, and, just like Merzbacher predicted, was an All-American in both singles and doubles.

And with that, Koves’ senior season arrived. The 1994-95 season was going to be tougher for the Jayhawks. The team had lost four of its six top players. Koves’ doubles partner, Jensen, left to play professionally. Although talent had been lost, the expectations were still high. Koves was the only senior on the team. On top of that, the Jayhawks had one of the most difficult nonconference schedules in the country. The team was scheduled to play more than 10 top-30 matches.

“Unfortunately, my last year I was alone because out of the top-six players, four graduated and Rebecca Jensen left the school [to play professionally],” Koves said. “It was difficult my last year.”

Prevailing in this complicated situation, the Jayhawks still pulled through to have an impressive season. Kansas won its fourth consecutive, and fifth in school history, Big Eight Championship.

Even without a NCAA appearance, Koves still dazzled the nation. She earned All-America honors once again, for the third-consecutive year, the second most by a KU player, behind only former teammate Hamers.

Koves cherishes all of the years she was able to spend at KU, not only playing tennis, but attending college as well. It gave her the opportunity of enjoying tennis in the setting of a team sport.

“For me it was the best to play for a team,” Koves said. “Even though it (tennis) is an individual sport, you don’t feel alone. People care about how you do, how you play. If you are having difficulties, they help you. For me it was a very good time just to feel that you are part of such a great team. These are the memories that I take with me to this day.”

One thing that she regrets is the timing of her NCAA Championship victory. A huge KU basketball fan, Koves had hoped to be acknowledged in historic Allen Fieldhouse at one of the Jayhawks’ home games. However, because the tennis tournament happened over the summer, that was not possible.

Even with the unfortunate timing, Koves ended her career at Kansas in great shape. She went 125-25 in singles and won 88 doubles matches. This was only the beginning of her career. She went on to win international tournaments and made a name for herself on the international circuit.

Koves is aware that she, along with her teammates and coaches, changed the Kansas tennis program for the better. She accepts this in a humble way. It is not that the team became better because of Koves, but that she helped the team be the best it could be.

“It is really important for me that I did something for the team,” Koves concluded.

With her accomplishments hanging in the rafters at the Jayhawk Tennis Center, Koves will always be remembered as one of the Kansas greats.