RCW: Once a Jayhawk, Always a Jayhawk: Tessa Scott 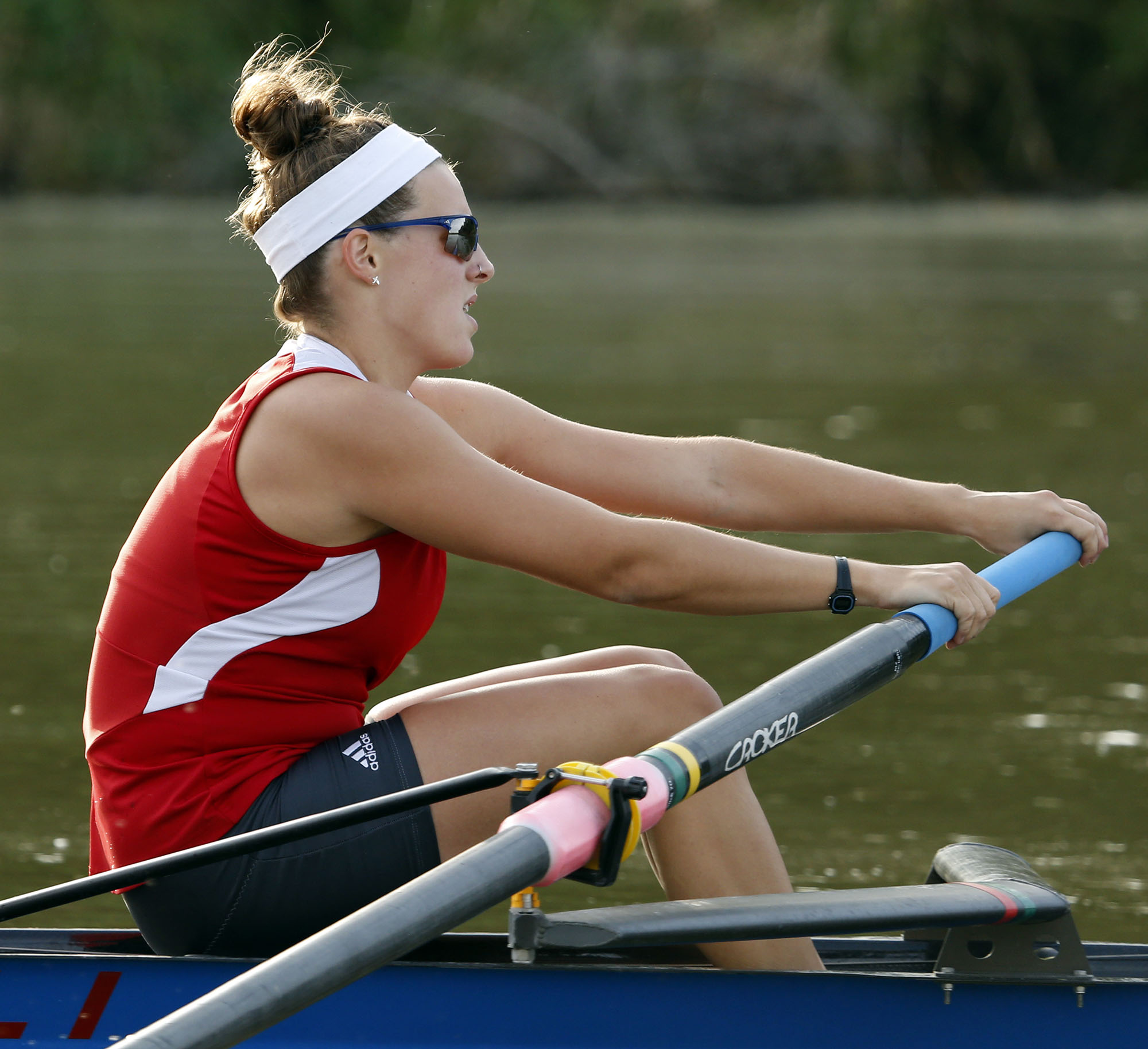 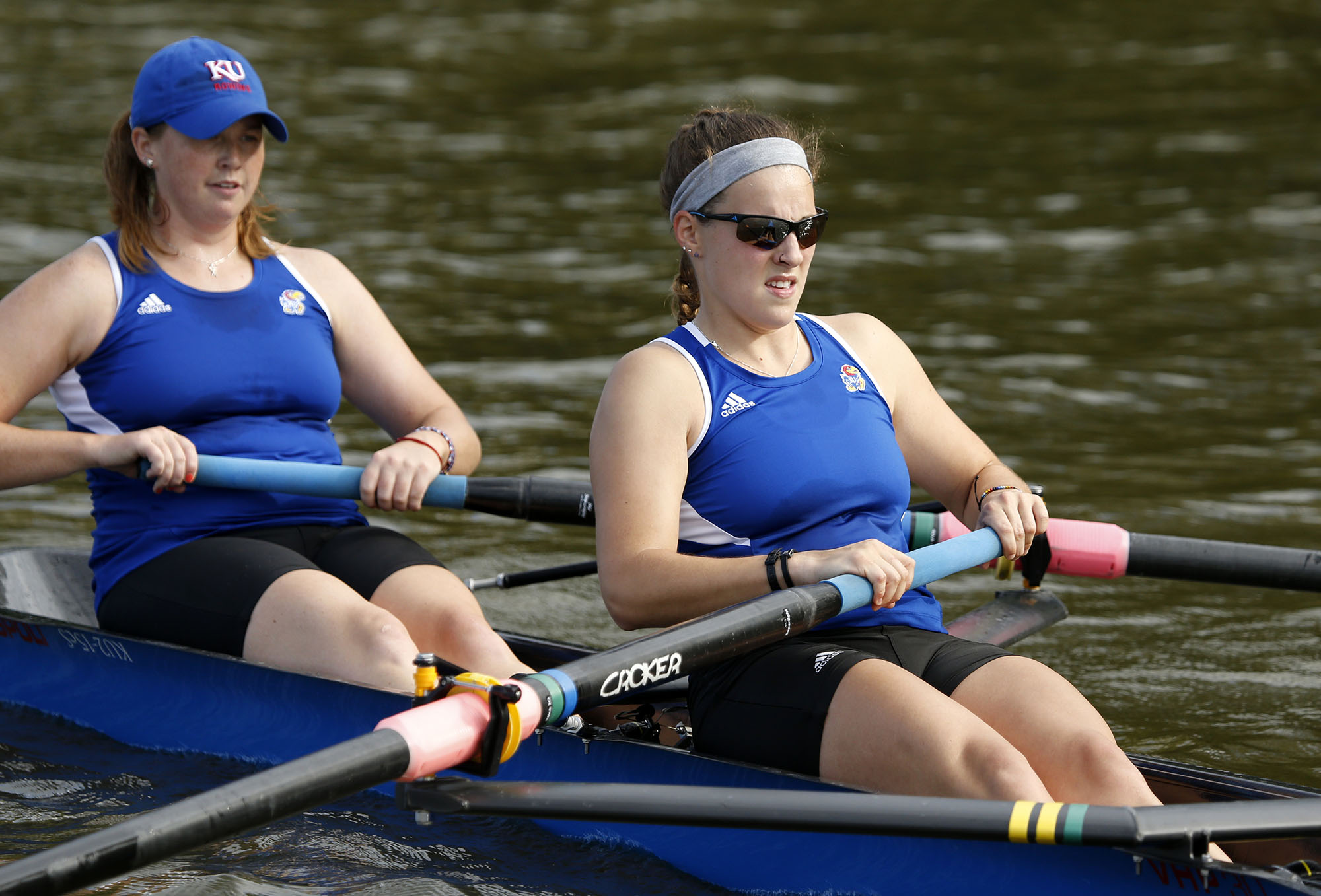 For young athletes aspiring to make it at the Division I level of college athletics, many years of training, practicing and competing is put into their sport. This wasn’t the case for former Kansas rower Tessa Scott and still isn’t the case with the majority of the Jayhawks who make up the Kansas rowing team today.

To many, rowing is an outlet for those who want to continue their athletic careers in a new and challenging way. Picking up an entirely new sport at 18 or 19 years old, let alone excelling at it and competing at the highest level, takes discipline, desire and a hunger that only a few have. The first few months of training are spent learning the brand-new sport, not even coming close to perfecting the technical aspect, but hoping one day to make it into the First Varsity Eight boat.

While competing as a power lifter in high school, Scott wanted to bring her strength to a team setting. Seeing just how strong and powerful the Kansas rowers are, Scott knew she wanted to be a part of that. Not long after Scott arrived on campus for her freshman year, rowing became a part of her identity. Scott realized her love for working hard, putting in hours of work and doing everything she possibly could to ensure success at the end of her rowing career. She knew it would be long, hard and not always fun, but in the end it would be rewarding.

“My rowing career had exciting and joyous heights and frustrating and disappointing lows,” Scott said. “Through it all, I had my teammates fighting with me and celebrating with me, which made every single day worth it.”

While studying Linguistics, being involved in organizations like International Friends, Global Partners, the Student-Athlete Advisory Committee and a tutor for those who couldn’t afford it, Scott’s genuine passion to get involved and to help others enabled her to put her handprint on anything and everything she touched.

“Tessa came in wanting to know about everything she could get involved in and she was so enthusiastic about all of it,” Carrah Trimble, Senior Director of Student-Athlete Development and Leadership for Kansas Athletics, said. “Tessa Scott is the definition of passion. That passion she brought everyday was so contagious.”

Scott worked her way up to the First Varsity Four boat during her sophomore year. Scott, along with three seniors, had an undeniable chemistry that allowed them to compete and see success at the highest level.

“Winning the Big 12 Championship by a fraction of a second was the most amazing end to our season and the seniors’ rowing careers,” Scott said.

Throughout her next two years as a Jayhawk, Scott tirelessly worked and fought for her seat in the First Varsity Eight. The intensity and demand of that boat was like no other she had raced before in her career. It was essential that Scott continued to prove her value and work ethic to the other eight Jayhawks in the boat race after race.

Scott’s work ethic to excel wasn’t just limited to her athletics, but was also applied to every aspect of her life. Her desire to succeed in everything, from academics to community service to leadership, led Scott to be nominated by the Big 12 Conference for the 2016 NCAA Woman of the Year award. The NCAA Woman of the Year award honors graduating female student-athletes who have made a name for themselves in their sport, in the classroom and in the community. Everyone could see Scott was a fierce competitor out on the water, but her nomination allowed others to see how much of an influencer she was and still is today, in her academics, volunteering and her research contributions.

Since graduating two years ago, Scott is continuing her education at the University of California, Berkeley. In her second year of the PhD program in Linguistics, Scott’s main study is on the languages of Swahili and Mam, a Mayan language. She is currently working on documenting the Bantu language, Ndengeleko, which is close to becoming extinct and is only spoken by thousands of people in the Rufiji district of Tanzania. With the help of Scott, the Ndengeleko language is being transcribed and translated so it can be studied and carried on for decades to come. After receiving her PhD, Scott plans to pursue a career in education as a Linguistics professor in hopes of continuing to be challenged and continuing to learn about language.

“I could not think of a better person who will be educating the generations to come,” Trimble said. “There are not enough words to say how highly I speak of her.”

Although this Jayhawk has traveled far and wide, from growing up right outside of Lawrence, studying in Africa and now leaving an impact on the west coast, Scott will never forget her Kansas roots. Being a Jayhawk is more than just the years spent on campus, going far and beyond just being a student. Being a Jayhawk means being a part of a family and being proud of where you come from.

“Being a Jayhawk means being fierce,” Scott said. “People see that ‘Kansas’ on my chest and the Jayhawk on my back and know that I have grit, heart and that I can’t be easily beaten.”