Kansas soccer was selected to another NCAA Tournament field, thanks in part to the contributions of their French defender Aurelie Gagnet. More than four years removed from an introductory Facebook message that brought her to KU, Gagnet’s father and brother recently made the trek to Lawrence to watch one of the most valuable Jayhawks help the team complete a memorable season.

Q: Talk about your senior season and the team cracking the top-25 poll.
A: Yes, it’s really exciting. I think we’ve been playing so well these past two years and it’s paying off. As a senior, I want to go as far as we can. I’m just grateful to have such a good team. I’m very excited and hope we make it to postseason and make it past the first round. I couldn’t have thought of any better way to end my soccer years.

Q: This year’s team has a lot of grit and really battled through tough, close matches. Would you agree and where does that come from?
A: Yes, I think our mental toughness is really incredible. We think that is what has changed compared to previous years. I think it’s like maybe three or four games we were behind score-wise and we came back and tied or even won. The girls are never giving up. We scored the first goal against Baylor, they tied us and everyone was just fighting and fighting and finally we got the win. It’s pretty amazing that everyone is just on the same mission and it shows on the field for sure.

Q: You are a defender for the Jayhawks, has that always been your position?
A: Before I went to KU, I was playing only a little bit at midfield. But yes, I’ve been a good defender for four to five years… I like the fact that my position I can do both. I can defend and I can still attack and try to cross the ball and be dangerous. I really like the mix.

Q: Head coach Mark Francis has eluded that a benefit of international players on a roster is their “business approach” to the sport. Does that fit you?
A: Yes, we all have very competitive mindsets. It’s all about always winning. We don’t just go on the field for the sake of playing soccer, we want to win.

Q: Now that you are in your fourth year at Kansas, what are some of the things you have grown to appreciate about the university and the community?
A: There are many people from all over the world and social backgrounds (on this campus). It was such an eye-opening experience for me getting to know (different) people. I also really like the school spirit. I really feel like a Jayhawk now. I will always be one. KU has such a special place in my heart now. It is going to be hard to leave.

Q: With you Kansas career coming to an end, do you have postgraduate plans?
A: I’m not sure yet. As of now, I’m preparing my graduate school applications for Political Science PHD and masters programs. But I might try and still play soccer if I get a chance to combine my studies and soccer, I will definitely do that. That’s my goal… I’m specializing in international nations and terrorism so there’s a lot of opportunities.

Q: Would you go back to Europe then to play and go to school, or stay in the United States?
A: It is easier to play professional in Europe than it is in the U.S., because you have more teams. But, I would like to stay here so I can go to graduate school and if I have the chance to do both, that would be awesome.

Q: As a political science major with an emphasis on international nations and terrorism, how was it for you being in the United State during the attack this summer in Nice?
A: When it happened, and you’re far away from home, I don’t know how to explain it. It’s strong in your heart because this is your country, places you’ve been, people you may have cared for — naturally, these events triggered my interest. Like studying terrorism, ISIS and these things… I just thought “this is an interesting thing to study” because what happened was awful and there’s just so much more that we don’t know. Reading about it, talking to my professors about it, I had known so many more things, I just thought it was interesting.

Q: How did your recruitment by Coach Francis start to come to KU?
A: He actually sent me a message on Facebook. I first I was a little like, “Is this for real?” I was intrigued, so I replied. Then it started to get more serious and he gave me a call. I was frightened, because my (English) wasn’t great, but it went pretty well. There was also a French golf player (Stan Gautier), who made the communication easier, and also helped me to make my decision.

Q: It sounds like when you first arrived to campus, you didn’t talk very much because you didn’t have a full grasp of the English language. Is that true?
A: Yes, it’s very true. I’m not awful, but I’m not a very confident person to start off. Yeah, it was a gradual process and when I saw that I could be here as a student and that I could be a part of a discussion, I started gaining confidence. It’s like a vicious circle, you know what I mean? It got better, and better, and better and it’s much better today than it was my freshman year.

Q: Between social, education or soccer which was the hardest and easiest to adjust to for you?
A: Definitely the social aspect (was hardest to adjust to), because I’m pretty shy. I think I finally just started being myself a little more; letting go. I think it helped a lot. I would say probably the education component (was the easiest), because I’ve been studying for a while. I’m pretty comfortable with school so that wasn’t as hard as soccer. The game is very different in Europe than in the States, so that was a bigger adjustment I would say. 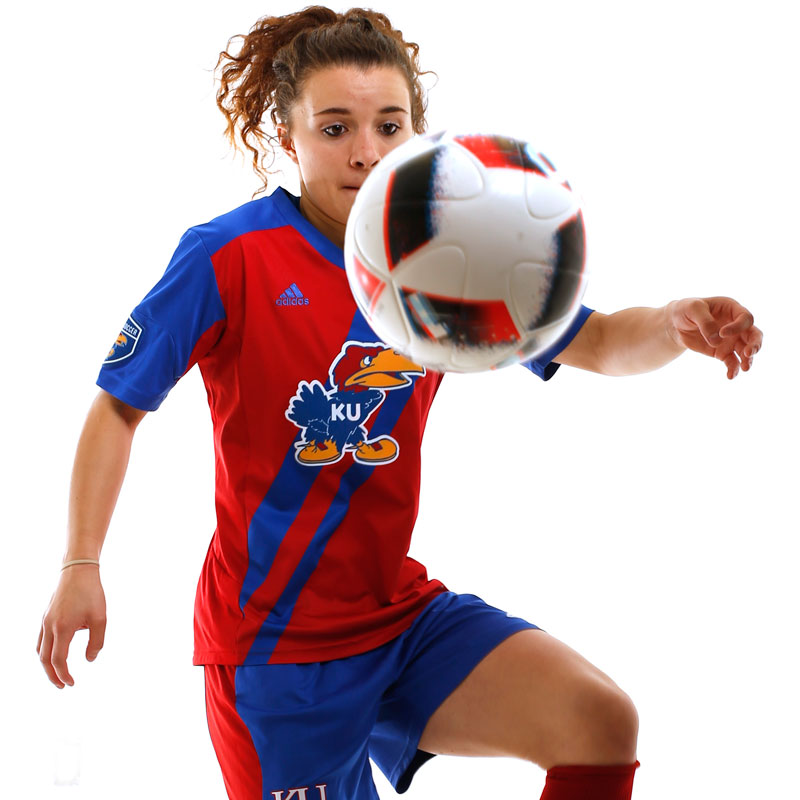 Q: Really? There was an adjustment with playing soccer in the United States?
A: It was pretty tough. First of all, (growing up) I never really thought about going to study (in the United States). I just got recruited through Coach Francis and decided to give it a try. But it was a pretty big adjustment being far from my family. Being around another language and in another country it takes a lot of will power to just – and believing in yourself also – to just keep trying and in the end it just works out, starting to fit in, making friends. It takes time, but you start fitting in.

Q: What was the biggest surprise for you coming to the United States?
A: Probably, this is weird, but everything is bigger here. The roads and the drinks they give you (her hands showing the size of a Big Gulp), and everyone is so much more welcoming. They want to get to know you. In France, people are a little colder. Those are probably the biggest changes.

Q: When you talk to friends and family back in France, what is their reaction about you being at Kansas?
A: I have been asked a lot, “Do you have cowboys there?” because they don’t really know. I think they think it is Texas. I think people think there is nothing here, but they just don’t know what Lawrence and KU are like. I wish they knew, because they would like it for sure.

Q: How many different countries did you travel to as part of the junior national team?
A: I would say around six, which is pretty nice.

Q: So soccer has treated you well?
A: Yes, very good. It has been awesome.

Q: What was that like having the opportunity to represent your country?
A: It was great. You hear the (French national) anthem before the game. Competing for YOUR country instead of just a team or something like that. I feel very grateful for the chance to do that. We went to the World Cup and the European Championship, and I’m just grateful and I will never forget anything about it.

Minutes prior to the interview, Aurélie’s father and brother arrived in Lawrence to be with her for her Senior Day match against Iowa State. It was her father’s (Fredric) second trip to KU and the first for her 18-year-old brother, Alexandre.

Q: It sounds like your father and brother just arrived in Lawrence?
A: Yes, they are going to walk on the field with me for Senior Day.

Q: When was the last time they have seen you play?
A: It has been a while, probably three or four years.  My dad is really excited.

Q: You are probably excited too?
A: Oh yeah (with a big smile). I want to play well.

Q: You lost your mother before you came to Kansas, correct?
A: She passed 10 years ago. It took us time to adjust and grieve, but today she is more of a strength for me. She is in our hearts and she gives us all strength.

Q: Other than family, what do you miss most about not being in France?
A: (Without hesitation) Food. I just miss some French dishes and my grandma’s food is really good too. I would also say being around French-speaking people. Whenever I go back for Christmas and I hear people talking French around me I’m like, “I’m home” and it is just a warm feeling I guess.

Q: If you could pick one meal right now what would it be?
A: I would want rice and tuna. My family on my mom’s side is Creole, so we are from a little island in the Indian Ocean. It is spicy and it is so good.

Q: When you go back home, do you feel like it takes you a little while to get back in the swing of speaking French?
A: Oh yeah, my French gets a little rusty. Usually on the first day I mix English and French because my brain hasn’t completely switched yet.

Q: Then when you return to Kansas, do you see the same thing?
A: Yes, my accent gets really thick and it takes me like a week to get back to normal, I guess.