A freshman from New Town, North Dakota, Avery Hale was raised on a reservation and always idolized Billy Mills. Now, by traversing the cross country trails while donning the Crimson and Blue for the University of Kansas, Hale is following in Mills’ footsteps. After his running days are done, Hale aspires to continue following Mills’ example by helping other young Native American athletes achieve their goals.

Q: You listed on your bio questionnaire that your father was a coach at your high school. How was that growing up with having your coach in your home with you?
A: He became my coach during my senior year in cross country. He’s been in the same position ever since. He had always been my coach, actually. When I would come home (from school), he would ask me how practice went, or during the summer he would ask me if I had ran yet. Had I drank enough water? Stuff like that. He is always telling me to stay mentally tough, so he has always been like a coach to me, even when he wasn’t (officially) my coach. 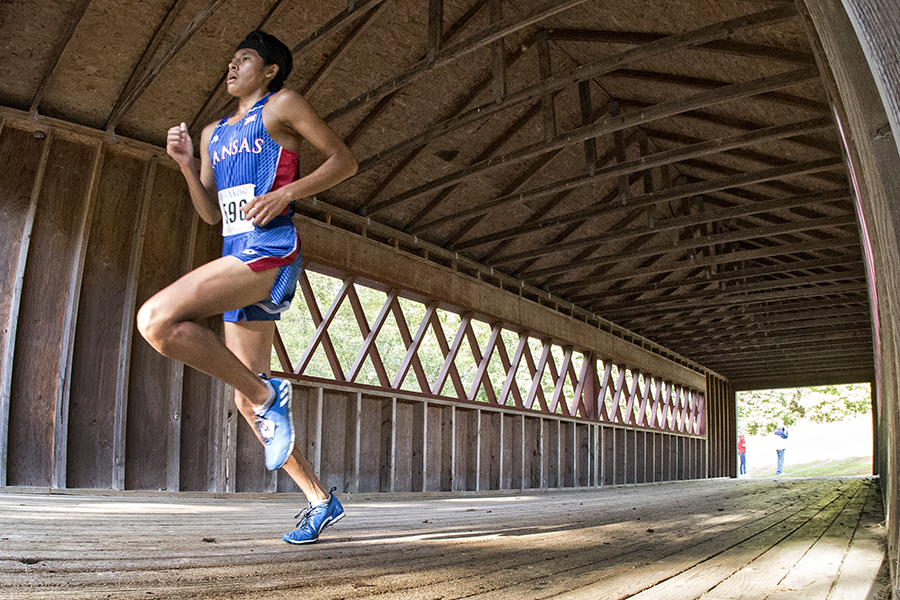 Q: How has that affected your relationship with him?
A: Looking back on it, I really liked it. I like to thank my dad a lot for pushing me to always stay motivated to run. It’s gotten me somewhere.

Q: You grew up in a big family (five siblings), what was that like?
A: Yes, I did. When we were younger there were a lot of us in the house. We had a small house with one bathroom, so that was the tough part about it. I liked having a big family. You always got to hang out with somebody at the house.

Q: Having such a large family, are you all really close?
A: Oh, yeah. (With a smile) Oh, yeah.

Q: Your older sister, Devanee, has been in the U.S. Air Force for four years as a staff sergeant. How has that been for you and your family having someone in your family on duty?
A: My grandpa on my mom’s side was in the Air Force too. I’m not sure for how long, but I think that kind of influenced my sister to go into the Air Force. She has travelled to a lot of places. She’s been in South Korea, Italy and was in Afghanistan for six months.

Q: How was that experience for your family, while she was stationed over in Afghanistan?
A: It was a little scary, worrying about how my sister is going to do every day. Is she okay? You hear about how situations happen over there.

Q: You have a pair of brothers, Chace and Jaiven, who are also avid runners. You are obviously from a running family. When did you know that cross country and track and field was the sport for you?
A: I would say about second grade. There was a running club in our small town and my dad got me in there. I liked it. It was pretty fun.

Q: You grew up in New Town, North Dakota which is located on the Fort Berthold Reservation. What was it like growing up there?
A: It is something unique I guess, but it’s not really different. I don’t know how to put it into words. There are a lot more people around me now (at KU, than where I grew up). I don’t know a lot of people here. At home, you pretty much knew everybody. I guess it’s the same for anyone who is from a small town. On the reservation, it is like family to everybody.

Q: How was that transition for you coming from a class of 28, to a university of 22,000?
A: It was intimidating at first, through the first week of college. I just had to stick it out, because I knew something good was going to come out of it.

Q: Some of the goals you have mentioned for after graduation from KU is to be able to help young Native American athletes to achieve their goals. Can you talk about that?
A: I would like to go back to (New Town) and start out as a coach and coach other runners. Then I would like to start some sort of organization where, with enough money, we can help fund kids to be able to go to college to participate in sport. I just want to get the word out that, “Hey, you guys can do it too.”

Q: You are a member of several indigenous tribes, what is the breakdown on your family?
A: On my dad’s side, he is Mandan and Hidatsa and my mom is Apache and Pueblo.

Q: Were you aware of the strong Native American community in Lawrence with Haskell University in town, before arriving at Kansas?
A: Last year, I tried to see if there were any pow wows going on and I was able to find a couple. But, growing up, I was always around the culture. My little brother danced and we would almost go to pow wows every weekend in the summer.

Q: Now that you are here at KU, have you been able to bring that culture with you?
A: I went to the pow wow that KU held and brought a couple of my friends from my dorm with. They had never really seen anything like that. I wanted them to see what it was like, because I think it is pretty cool. 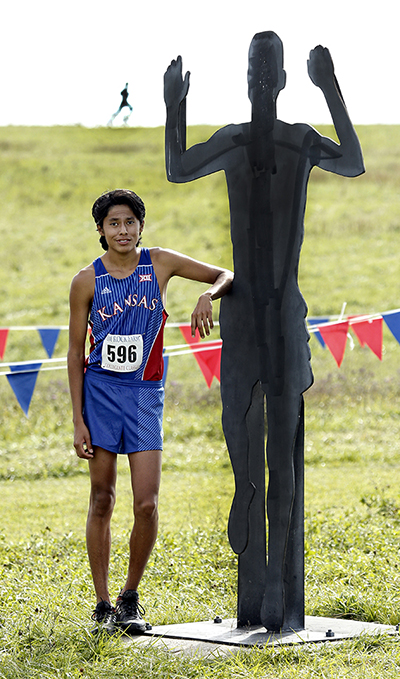 Hale at Billy Mills Silhouette, Rim Rock FarmQ: Isn’t that really one of the great things about college, all these different backgrounds and walks of life coming together to learn and share?
A: Yes, indeed. I’ve had people ask me about what it is like being on the reservation and they are being serious when they ask me, “Do you still live in tepees or do you still have to hunt?” I thought they were joking around, but they were serious. I want them to know how it is and how it has changed.

Q: How did you get involved with Kansas track and field/cross country?
A: I was in school last year, but I didn’t make the team. So I spent the year training and training so I could go to tryouts this year. I let coach (Michael Whittlesey) know that I was still training and I guess a spot opened up. I got the spot.

Q: When you got the news, what was that like for you?
A: I was so happy when I found out. It was like the greatest feeling ever.

Q: Not being a scholarship student-athlete, why did someone from North Dakota decide to come to Kansas?
A: I watched a movie called “Running Brave.” Have you heard about it? With Billy Mills. I watched that when I was a young kid and that movie got me fired up to come run here. I watched it when I was in third or fourth grade. I watched it over 20 times. It’s a good movie. I always had the goal to come to (the University of Kansas).

Q: How did it feel to step foot on campus for the first time, knowing it was a goal for so long?
A: It was crazy. Thinking about it and how I got here. It’s a big school.

Q: That’s awesome. Have you ever had the chance to meet Billy or talk to him?
A: I did, but he probably won’t remember me. There was a race here in Lawrence, I think, junior nationals for cross country, (where he was at). He also came to my reservation too, at a pow wow. That was pretty cool to see him again. I look up to him.

Q: What is it like running out at Rim Rock Farm with the Billy Mills silhouette there?
A: It was my first time running it (back in early September). It’s a tough course.