A freshman middle distance runner on the University of Kansas track & field team, Mitch Grosserode comes from a very talented family out of the state of Nebraska.

All of the Grosserodes attended Pius X High School in Lincoln over the years and track & field was the sport of choice among family members. A 1978 Pius X graduate, matriarch Joann still holds two school records to this day. When pregnant with youngest son Mitch in 1997, Joann’s oldest child, PJ, was 17 years old and broke the state record in the 400-meter dash. As the youngest Grosserode now explains it, “Track has always been what we have done in our family.”

Q: So track runs deep in the family?
A: “I actually played golf, golf was my thing. I played competitive golf my whole life and then in high school (the state of) Nebraska wanted us to do one sport in the spring. So I chose track, but it was a really hard decision.”

Q: What gave track that final edge?
A: “Well, my family, obviously. We had all run track and I knew in college, with track, I would have a better opportunity to be where I am today. Because with golf, there’s only eight guys on the team.”

Q: Do you still play golf?
A: “Yeah, I played in a couple of tournaments during the summer in high school, but I always play for fun.”

Q: What is the track & field history like at Pius X High School?
A: “Coach (George) O’Boyle has been the coach of everybody. He is still coaching, he’s 76 maybe? He’s been there forever. We’ve all gone there.”

Q: Do you ever think about how your family is full of track stars?
A: “Yeah, we’ve talked about it. My mom has the speed, my dad was a basketball player. We got all the speed from my mom.”

Q: Was it competitive within your household?
A: “Yeah, we broke PJ’s 4×4 record — it was 3:21. He held it for 16 years and we broke it by five seconds my freshman year at 3:16. It was nice. He was there, all of my siblings were there throughout high school. PJ and his wife and kids lived five minutes away from us in Lincoln. Tara lives in Lincoln and Danny lives in Omaha.”

Q: Was it tough being so much younger?
A: “I definitely got a lot of experience.”

Q: Did you feel like there were expectation put on you because of your older siblings?
A: “Yeah, being the last child and going to Pius, I wanted to be the best I possibly could, leave a good legacy.”

Q: Did you feel the pressure from Coach O’Boyle?
A: “At times, but he’s a great coach.”

Q: When you broke the record?
A: “Yeah, that was the No. 2 time ever (run) in Nebraska. The team that beat us, we got second to at state, but we beat them at districts. And we would’ve had the fastest time any other year, but it was just that year. After that, I kind of felt like, ‘Yeah, I can do this.'”

Q: So going back to the competition among the Grosserode family …
A: “I can beat them all at golf. When I was in fourth or fifth grade, Nebraska used to open their indoor track, they don’t (do) anymore, but we went and had a race – me, PJ and Danny. PJ was still in pretty good shape, he was maybe 29, 30 and Danny was still in college and I was in fourth or fifth grade. Danny ended up winning. He didn’t run track, but he won.”

Q: Touching on your brother, Matt …
A: “I had just turned six years old. It was August 6, 2003. He played football at Iowa State and that was after his junior year. He actually wasn’t going to play his senior year. He had been hurt, he was done, and he was just going to go to school. He was driving down a one-way street and a lady ran a stop sign, so he swerved to miss her and a big moving truck, like a U-Haul, hit him head on. He died at the hospital.”

Q: How important is that to you?
A: “All of his friends from Iowa State, we still stay in touch. I’ve heard stories. I don’t remember this, but he would take me in to the locker room after wins and they’d throw me around.”

Q: So he wasn’t the running type?
A: “No. He threw the shot put and he made it to state in shot put. But he was a two-time state champ in football and he played fullback at Iowa State.” 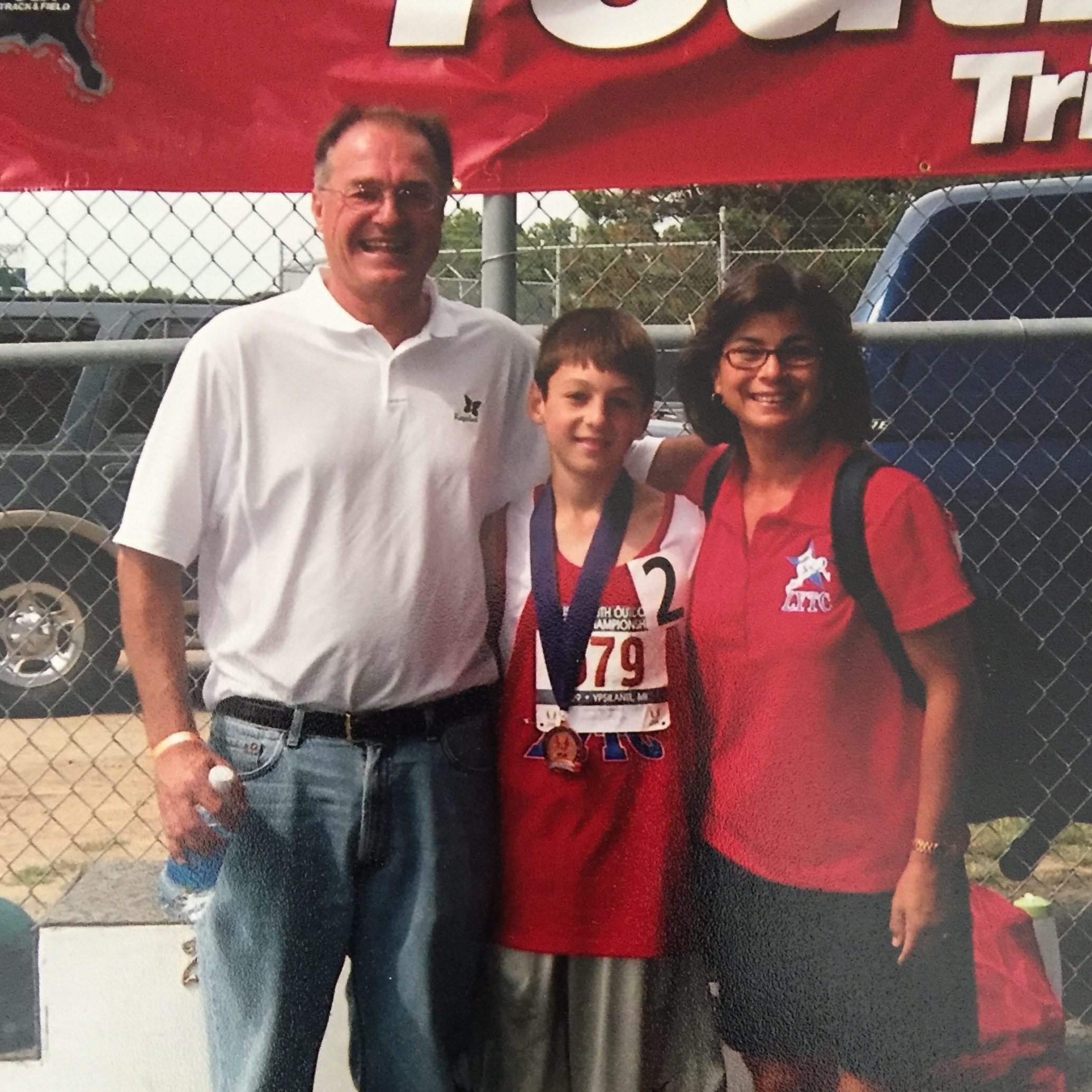 Q: How tough was losing Matt?
A: “My mom always says the toughest loss is a child. I think at that point, my parents could have brought us together (as a family) or brought us further away from each other, but it definitely brought us closer to our faith and everything. We were just a lot closer after that happened. PJ and Matt are only like two years apart, so they were really close. That was really tough for PJ. He lived in California at the time, but he moved back right after.”

Q: Then your dad passed in 2011 …
A: “Tara ran here (Kansas), she came here in 2009, her freshman year. So her sophomore year in 2010, in the middle of December, we were watching football, my mom, dad and I. My dad was a pilot for American (Airlines) and earlier in the year, that July, my mom and I were going to a golf tournament and he called and was like, ‘I can’t pick up my bag’ so my parents knew something wasn’t right. They went to the doctor and were told everything looked fine. Which something wasn’t right. We were watching Sunday Night Football that December and he said, ‘I need to go to the ER.’ My brother came to pick me up from the ER while my parents stayed. The next morning my mom told us he had lesions all over his back, it was at stage IV. They didn’t even know what kind (of cancer) it was because it was everywhere. They ended up saying pancreatic, but there was a tumor in his lung too. He died May 30, so six months (later). When Tara found out, she talked to Coach (Stanley) Redwine and decided to come home. She loved it here but we knew he was going to die and she needed to be home.”

Q: So having an accident baby was a good thing?
A: “Oh for sure. When I decided to come here, we knew it would be tough. She’s doing better now, but the first three months until October, were tough.”

Q: Was it tough for you?
A: “In the beginning, yeah, because we spent so much time together.” 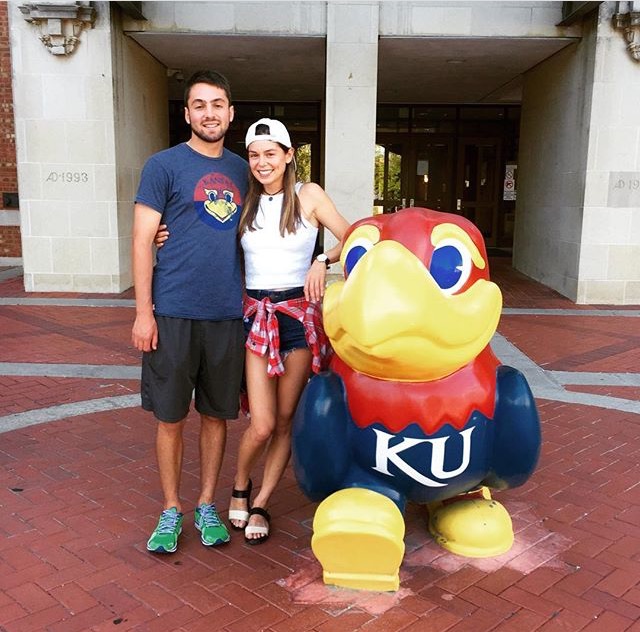 Q: Pius was such an important part of your family, have they given back to you the way you guys gave to them?
A: “Yeah, in the weight room they have Matt’s jersey hung up. At St. Joe’s, where we all went to elementary school, they have a basketball league and they have a plaque with my dad’s name on it because he was the director of it for a while and he played for 25 years. He was the coach of all of our basketball teams growing up.”

Q: How did you chose KU?
A: “When Tara was here, I loved everything about it, the town and the track team. After eighth grade, I came here for camp in the summer and I loved it. I was in Coach Redwine’s group. Then after my freshman year, I couldn’t come because I was hurt. My sophomore year, I came and my junior year also. I loved Coach Redwine and all of the other athletes. There was no other place I’d rather be.”

Q: Did Coach Redwine being there for Tara influence your relationship with him at all?
A: “Yeah, he’s a great guy and coach. I couldn’t imagine having a better coach. I just can’t imagine being anywhere else. KU has more of a sense of family while Nebraska didn’t. It’s a bigger team and just didn’t have the same atmosphere or family feeling.”

Q: Did you ever think you would end up at Nebraska?
A: “PJ definitely wanted me to go there because he loved his whole experience when he ran there.”

Q: Did you ever have any doubts about being here at first?
A: “I always knew I wanted to be here. It’s only a three hour drive (home), it’s not bad. I can go home on weekends. I can go home and my mom can come down. (For) The meets, she comes down in the morning, I run, we go to dinner and she drives back that night.”