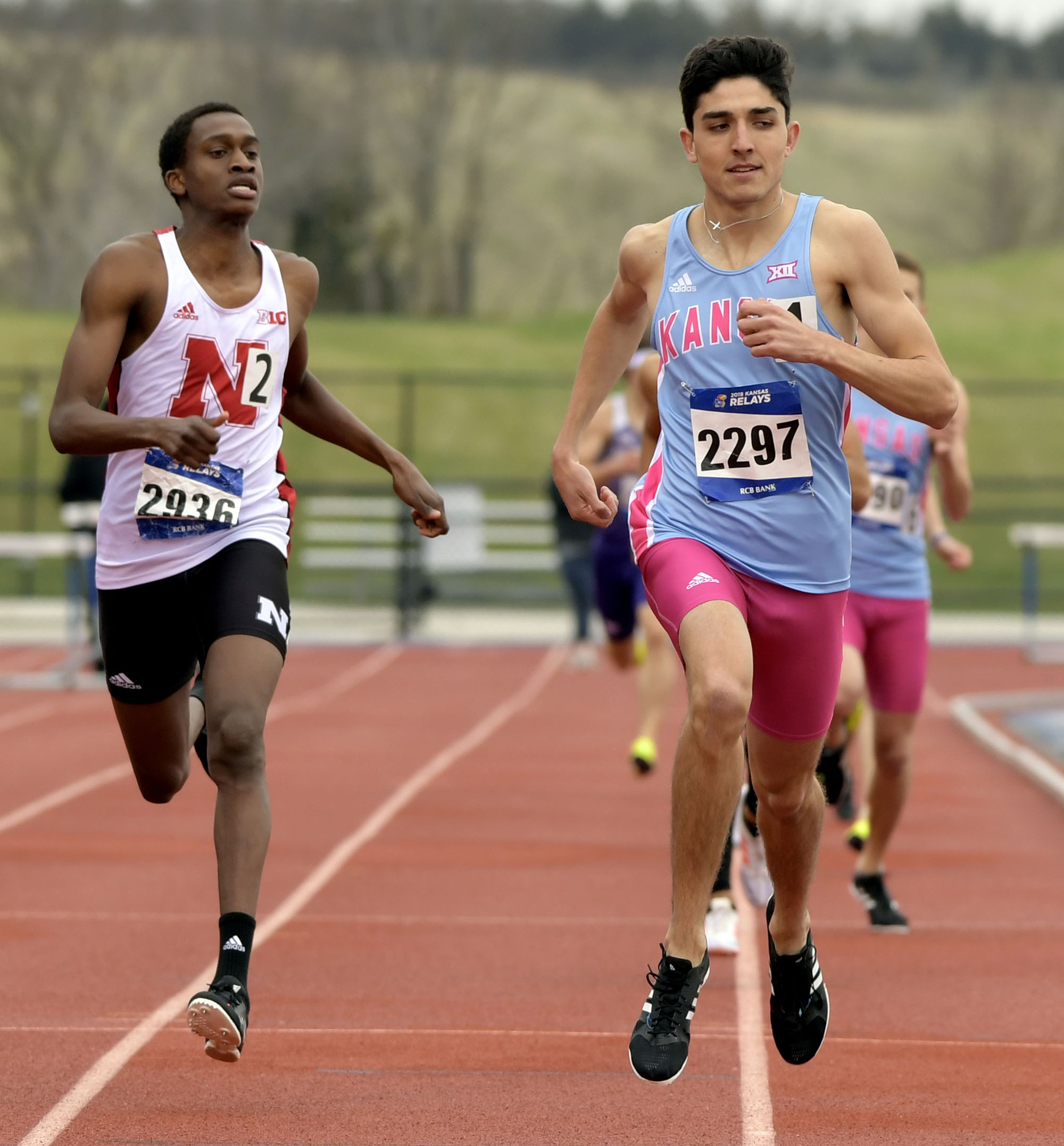 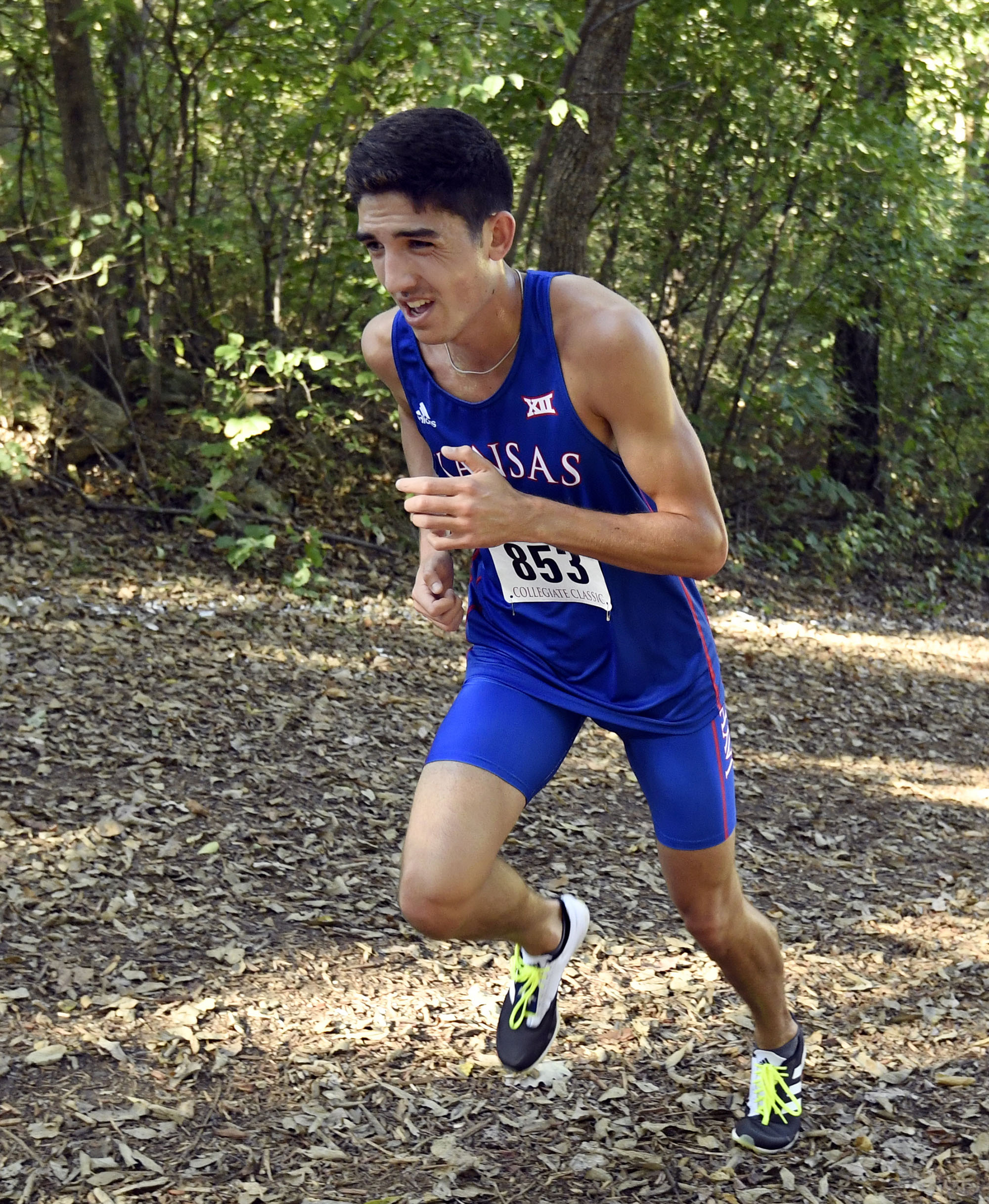 Sophomore cross country and track & field standout Bryce Hoppel did not always picture himself as a collegiate runner. From age four until his sophomore year of high school, soccer was his main sport. Then, the summer before his junior year his coach decided to make it mandatory for the soccer players to run cross country to stay in shape. No one predicted this request would turn into the start of Hoppel’s journey to a successful running career.

In just his second season as a Jayhawk, Hoppel won a Big 12 Indoor Championship in the 800 meters and earned First Team All-America honors. And if all goes according to Hoppel’s plan, these accomplishments are only the beginning.

Q: Soccer was your main sport growing up. Before shifting your focus to running, did you plan on playing soccer at the collegiate level?
A: I did. I never really looked too far ahead, but I always dreamed of being a collegiate soccer player and hopefully finding somewhere to play. I didn’t really plan it out, but then I found out I was better at track.

Q: When did you make the transition from soccer to track?
A: [My] Sophomore year [of high school] was my last year playing soccer. So, I wasn’t really thinking about college all that much yet, but going into my junior year – that summer – one of my cross country coaches said I should come try to run summer track. That summer was when I ran the 1,500 [meters] and was like, “Whoa. I’m good at this.”

Q: So, was that when you made the decision to focus on track specifically?
A: Yeah. I was kind of in the process that sophomore year and I tried out for cross country. I found a really good group of friends there and I just loved the team aspect and everything about cross country and track. I think my teammates were what really helped me make the transition easily.

Q: You were raised in an athletic family. What sports were/are they involved in?
A: Definitely. My parents just kind of put all three of us [kids] in everything pretty much. I remember playing baseball, soccer, football and basketball; I did it all. I loved baseball a lot, too. My sisters, they also played it all. It turned out that all three of us [siblings] kind of went our separate ways. I ended up in track somehow, basketball was Kelsey’s main thing, and Megan ended up with soccer. Megan was actually supposed to play collegiate soccer, but she decided she didn’t want to. Kelsey found her way in basketball and won a Division II National Championship [at Lubbock Christian University]. Our parents just kind of left it up to us to find what we loved the most.

Q: Were your parents involved collegiate athletics or as kids?
A: Not collegiately, but my dad’s favorite sport to play was football. I wasn’t too big of a fan of playing football, but he has a love just for sports in general. Then my mom was really big into softball. So, it turns out that all five of us each kind of had a different sport.

Q: Your dad is the General Manager for the Midland RockHounds baseball team. How long has he been doing that, and did his job influence your baseball aspirations at all?
A: Yeah, it was really tough. Going into seventh grade I had to make another decision between baseball and soccer. Again, I think just the people – all my friends were mainly in soccer – so I kind of moved toward that. But my dad has been in baseball for over 35 years, so that’s something he’s been doing a long time. I grew up around baseball and it was a tough decision [to stop playing]. We all grew up at the ballpark and it was a really cool experience.

Q: What’s the thing that you enjoy most about track and cross country?
A: I think the thing at first was that my high school team was a really close group of guys. Just that team aspect – traveling with your team, hanging out with your team – that’s definitely the most fun part about it. Some people think of it as an individual sport, but really there’s such a huge family in track. There are so many of us [on the team] and it’s a really fun time. I’m just thankful for the friendships with the coaches and teammates I’ve made through it. So, that’s my favorite thing.

Q: Going from cross country where you’re running longer distances to track where you’re running as a mid-distance guy, is that a tough transition or does it help you?
A: So, I got into cross country because my soccer coach told me to do it to help me get in shape for soccer. And honestly, I hated it at first. It’s a really long, long way to run. I’m not sure how I got accustomed to that. But now, I see it as a way to build my strength for track. I love it now, even though it’s really far, everything we do in that builds toward something greater. Coach Whit [assistant coach Michael Whittlesey] really does a good job of training us no matter what we’re doing.

Q: What made you pick KU?
A: I think it’s another “people” thing. I went to Alabama and I was blown away by all the facilities, the campus and just everything about it. Then I came to Kansas like a week later and I think it was really just the guys on the team and Coach Whit. I was like, “Wow. I want to be a part of that.” I mean, of course we have great facilities and everything here, too, but I think that was really the [family] aspect that drew me here.

Q: A lot of Texans love their home state. Being from Texas, are you that way? If so, was it tough for you to leave to come to Kansas for college?
A: It’s actually kind of funny because when I chose Kansas everyone was like, “What?! Kansas? Why are you going to Kansas?” I had to explain to everyone in my high school why I was going to Kansas. I mean I love the state of Texas, but I always just kind of thought of it [the college hunt] as finding where I’d be happiest. It didn’t really matter where it was, I just asked myself, “If I was there, would I be happy?”

Q: How do you balance the rigorous coursework in the mechanical engineering program with your demanding athletic schedule?
A: I’m on the verge of switching majors, but just in general I think being an athlete and a student is a really tough thing to do. But if you really just put your time and effort toward what you know is important, it all comes together. There have been tough times here and there, but we have such a great staff to help us through it, so I’ve never had too much of a problem.

Q: If you switch, what’s the next major?
A: I was thinking about sport management, kind of like my dad.

Q: So far, you’ve had a pretty successful sophomore year – Indoor Big 12 Champion in the 800 meters and First Team All-American. What does it feel like to be able to achieve those in just your second season as a Jayhawk?
A: I always dreamed of being at that point, but I never thought it would come so soon. It definitely makes me aware of what I’m capable of doing, but at the same time it makes me hungry for more and makes me want to work for that “next thing.” Hopefully I’ll be a national champion someday. But it really still hasn’t hit me yet. I still feel like just another guy on the team. But it’s incredible how much Coach Whit and how much this team has helped me improve.

Q: What’s your favorite memory as a Jayhawk so far?
A: I don’t want to be too cliché, but those basketball games have been a lot of fun.

Q: Is there a specific game you recall?
A: I think it was the West Virginia game last year. [Sophomore pole vaulter] Chase [Pennewell] and I were being honored on the court for academics. For some reason we didn’t stay for the game, but we went back and watched it all on TV together. I don’t know why I liked it so much, but that was a crazy game even though we didn’t get to be there [in Allen Fieldhouse]. It was still like one of the coolest experiences of just being a part of KU athletics.

Q: Has competing in the Division I realm been what you expected so far?
A: Yeah, I think so. I always looked at it as I wanted to be competing against the best guys and competing at the highest level, so I wouldn’t have been happy with going anywhere other than Division I, but I think it’s really humbling to get to compete against the nation’s best. I really thought that it would be hard to get back to the top after being kind of [at] the top in high school. That kind of scared me at first, but now it’s just kind of like I’m like part of that group.

Q: What advice would you give to runners who aspire to achieve success at the collegiate level like you have?
A: I would say never let the training and the rigors of college get you down. You just have to have faith in your coach and your team to pull you through it. Just go along with it. Don’t think on it or dwell on things too much, just go with the flow and trust the process.

Q: What are some accomplishments you hope to have before you graduate, both on and off the track?
A: Off the track, definitely get good grades, stay on the honor roll and dean’s list, get a degree – that’s what I’m here for first and foremost. But athletically, I mean a national championship is always on the mind. Not only maybe getting an individual one, but a team one I feel like is like so much cooler of a goal. I want multiple national titles if I can do it and that’s just really the goal – to try to be the best. Then, hopefully even afterward continue a pro career if I get to that level.

Q: If it could all go exactly the way you want, what’s your plan from here?
A: I think the plan would be, hopefully get that national title and then just keep it going. I want to get as much out of track as I can and even two years would be great, but I really just want to get the most out of the experience and the sport and just try to go as far as I can.

Q: And then take over the RockHounds?
A: That would be awesome.