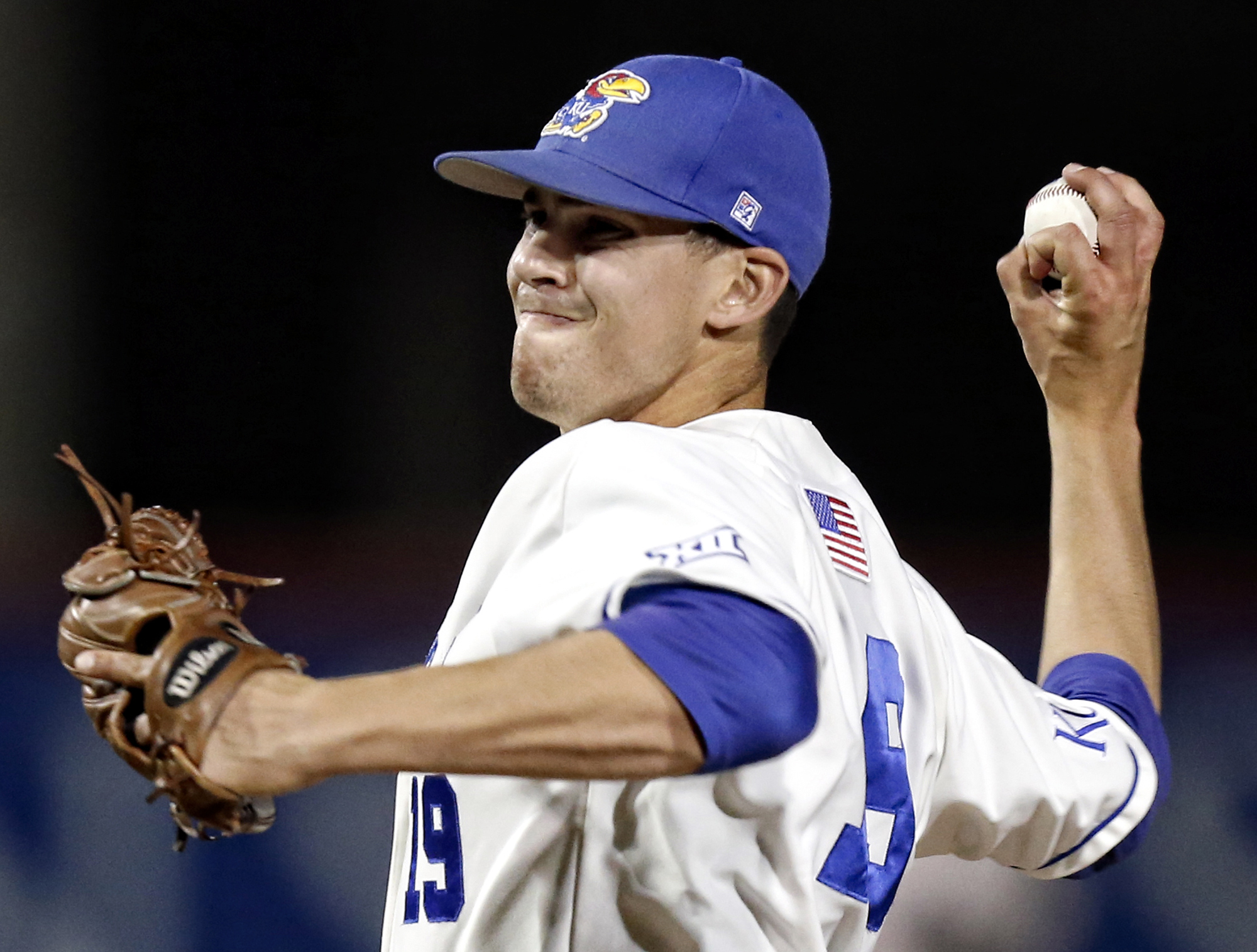 “One Team” is a phrase embraced by student-athletes at The University of Kansas. It represents the notion that while there are many different sports and individuals with different backgrounds, at the end of the day everyone is on the same team – the Jayhawk team.

This year, senior Casey Douglas, a right-handed pitcher from California on the KU baseball team, is serving as the president of the Student-Athlete Advisory Committee (SAAC). The role of SAAC is to create camaraderie among the different Kansas athletic teams. Douglas wanted to emphasize his passion for the #OneTeam concept, so he organized a SAAC kickoff party last month for student-athletes and staff members to attend. At the party, SAAC released the first-ever #OneTeam schedule. Each of KU’s 18 varsity sports has one game on the schedule designated to encourage attendance from other student-athletes.

Q:  For people who may be unfamiliar with it, can you explain what #OneTeam means?
A:  The #OneTeam initiative was started by the athletic administration, and that initiative was to show how diverse we are as student-athletes. We have members who are from across the country and around the world. We want to show the importance of that and how it makes us such a unique student-athlete body. So, we wanted to embody that and make it into one Jayhawk community by calling it “one team.”

Q:  When did you first hear about #OneTeam?
A:  I first heard about it three years ago, my freshman year. Then this year we, as the Student-Athlete Advisory Committee, wanted to revamp it because we realize how important it is and we wanted to bring it back.

Q:  Does every school have a SAAC?
A:  Yes, each school in the NCAA has a SAAC. In the Big 12, every school has two Big 12 reps, so they communicate directly with the conference.

Q:  Can you give an example of something you worked with either the Big 12 or NCAA on?
A:  This year was the time demand changes that we had coming from the NCAA. We were able to work with the Big 12 to survey student-athletes about their opinions on these different formulas for what changes we should make. We were able to help give our opinion to the NCAA, which ultimately helped formulate what our time demand situation is right now.

Q:  How did you get involved with SAAC?
A:  I got involved my freshman year when I went to a meeting with a senior at the time. I just thought it was cool how you could see what’s going on behind the scenes in student athletics. I also really wanted to get involved in the community, so that’s what sparked me to join and now I’ve been on [the committee] all four years.

Q:  Can you tell me about the revamp with the kickoff party that you organized?
A:  We, the five members on the executive board, got together and wanted to revamp #OneTeam. We decided to have this kickoff party to explain what the #OneTeam goal is, which again is to show how diverse we are and come together as one Jayhawk student-athlete community. Then we also wanted to start the #OneTeam games.

Q:  What are the #OneTeam games?
A:  There’s a schedule out and each team has one designated game on the schedule. That game is for the whole student-athlete body to go to and to show support for the team competing. In college athletics you can be isolated to (within) your team a lot. We thought it was important to get together outside of your sport commitment and go support fellow Jayhawks because it is really important that we do stay together, so we created the #OneTeam event to showcase that. It’s going to be fun because it’s a time for us to go support each other and we’ll have activities before the game, like a tailgate or some sort of small event to promote it.

Q:  Being from out-of-state, did the #OneTeam concept help you transition to Kansas?
A:  Yes, it definitely did. Coming from out-of-state I didn’t know anybody. For me, that really helped make me so passionate about what this is because we have so many athletes who aren’t from this state or aren’t even from this country. Here, we’re all about family, so to be able to form a community-type feeling within student athletics is really important.

Q:  So the camaraderie helped once you got here, but what made you decide to come to Kansas in the first place?
A:  I was looking at schools primarily on the West Coast, where I’m from. Before I got a call from Kansas, I never even noticed Kansas on a map. Then when I came to KU, I just saw how it has a college-town feel and family atmosphere. Plus, with the facilities and the coaching staff we have, I couldn’t say no. I wanted to get out of my comfort zone and try something new. It was the greatest opportunity I’ve ever received and honestly the greatest decision I’ve ever made.

Q:  How did you get into baseball?
A:  I started playing baseball as soon as I could hold a ball. I played all sports growing up, every sport I could. But baseball was really what I became passionate about. During high school I also played basketball and football, so I didn’t start playing only baseball until college.

Q:  Outside of baseball and the SAAC, what are your other hobbies?
A:  I’m really into music; I play the drums. And I’m a huge dog lover.