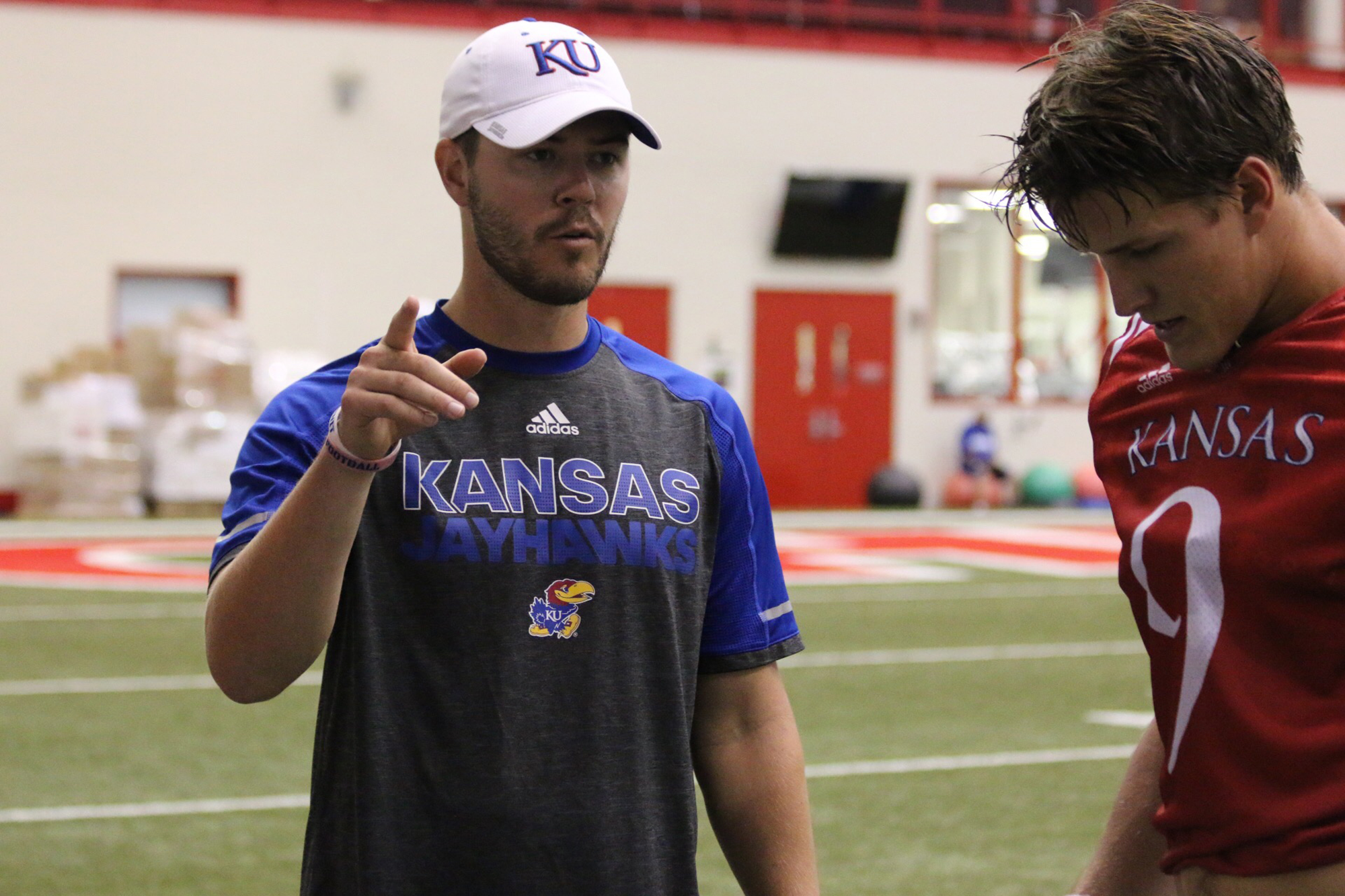 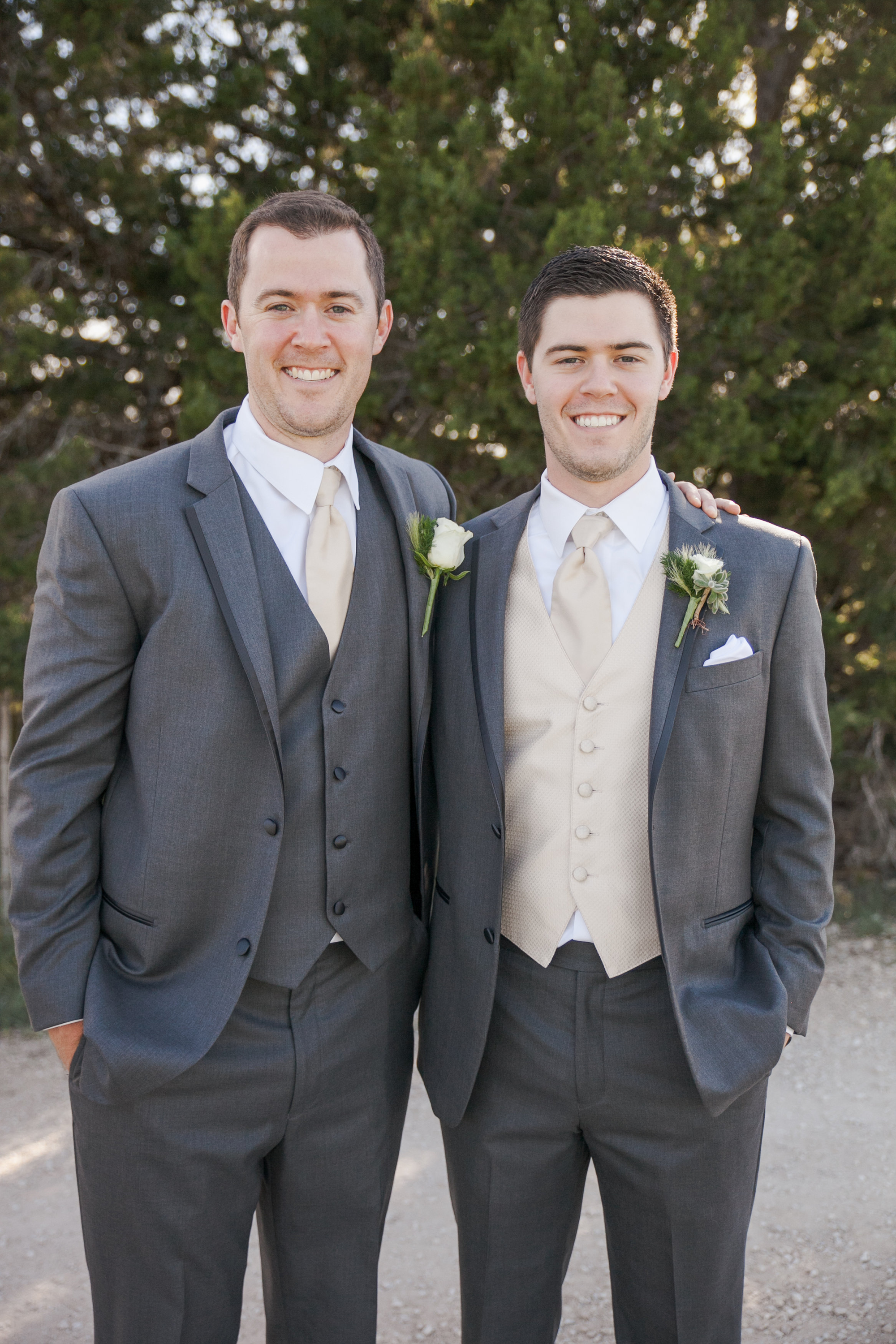 Growing up in the community of West Texas, University of Kansas quarterbacks coach Garrett Riley had two choices: sports or agriculture. With a father and grandfather who each played quarterback at Muleshoe High School, and an older brother who was in the midst of carrying on that family legacy, Riley saw football as his only option.

Q: Who made you want to play football? Was that what you did in your West Texas town?
In a small West Texas town like Muleshoe, it’s just sports in general. You’ve got that and you’ve got agriculture. Lincoln (Riley, head football coach of the Oklahoma Sooners and Garrett’s brother) is six years older than I am so when I was just a kid, he was in junior high and high school, really getting into sports. My granddad and dad both played at Muleshoe High School, where we both played too, and they were all quarterbacks, so you kind of wanted to follow up and keep that whole family legacy going. Lincoln went to and walked on at (Texas) Tech and starting student coaching, so when I went and walked on there also, I kind of got to see, through him, what the coaching side of it was.

Q: From your own perspective, what similarities do you and Lincoln have?
(We are both) Pretty calm and collected guys. I like to think that both of us know how to get amped up when we need to and can have that urgency and that energy for your players when you know that they need it. I also think he’s good at relating to the guys and I like to think I do a decent job of it as well. But the first thing that pops into my head is just being humble, small-town guys. That’s what we were and how we grew up. That really hasn’t left either of us and even now, being in the position that he’s in, he’s just being the same guy and he hasn’t really changed much. That has a lot to do with our parents and the kind of community we grew up in.

Q: With you being the younger brother, have you always had competition between you and Lincoln? Especially when it comes to football and now, being in the same conference?
Not as much now, but certainly as we grew up together. It was the typical brotherly competition in everything we did: playing video games, playing ball in the backyard and hunting. I mean anything, you name it, that’s where our competition was and was present. Right now, we’re at different points in our careers; certainly, we’ll be competitive with each other one day out of the year when we play each other, but other than that, we really don’t talk about football all that much.

Q: What was the first thing that went through your head when you found out Lincoln was replacing Bob Stoops as the head coach at Oklahoma?
We were at a summer camp in Georgia and Coach (Zach) Yenser comes up to me and shows me on his Apple watch. He came and showed me the deal and I just thought it was some made up thing, some story that was going around at the time, and I was shocked. But then it went on more and more, people started blowing me up and it was sounding like it was real. Deep down I was a bit shocked, but I was fired up for him because I knew that he would be ready. There was no doubt in my mind that he would be ready, so as it grew that it was actually a true thing, it was pretty neat to see.

Q: Does seeing Lincoln succeed as a head coach make you want to become a head coach?
Absolutely, yes. More and more in college football right now, just seeing the young guys who are successful as coordinators and now as head coaches (makes me want to achieve the same). There are several in our own conference. That adds motivation to young coaches, and I’ve always aspired to move up in the college coaching ranks. I know when the time comes, it’ll be awesome and I’ll be patient and excited where I’m at. But yes, it’s definitely motivating and cool to see a lot of young people do well with the bigger roles here in college football.

Q: Do you feel like you’re a better coach beside him, on the same team, or now that you are rivals in the Big 12?
It was just a different point in my career. I was a very young coach just kind of starting out in the business when I was with him. I certainly learned a lot working by him and working with that staff in East Carolina. Since I’ve been in the business about five years now, I’ve just grown since then, so I hope I’m a better coach now than I was then or something’s wrong. I learned a lot from those guys early on and was fortunate enough to be around so many successful people early on in my career.

Q: You’re facing off against your brother this weekend, with both of you in in your new coaching roles at your respective schools. How does it feel? What are you doing to prepare for Saturday’s game?
Honestly, nothing. Nothing out of the norm. For us, we’re such (a) routine specimen as coaches, you kind of just go week-to-week and don’t really look ahead to things like that. It’ll be cool for about 10 seconds when I see him out at midfield but after that, it’s just kind of another game. He’d be the same way and probably say the same thing. We’re just kind of creatures of habit in that way.

Q: People don’t understand the hours, the commitment, or the time, that coaches put in. How great is it to have someone so close to you who 100 percent “gets” it?
It’s awesome. Early on, not as much now, but getting into the business it definitely provided a resource to go to about anything that maybe you’d be too shy to bring up to someone else. I kind of had him to lean on early on in my career. I started out at a Division III school so learning how to move up and move on from there (was important). To be honest, now it’s certainly good to have him and still have that guy to lean on, but you kind of just want to go on your own path a little and figure things out on your own too, just because you want to be yourself and not always mimicking someone else. He’s been great though, (he) definitely helped me out early on.

Q: The week leading up to the game, when your team will face off against your older brother’s team on the football field, is it at all awkward? Is it hard for your parents? How have your parents handled this new situation?
I’m sure it’s harder for them. It’s not a big deal to us. Like I said, it’ll be cool for about 10 seconds but after that, it’s just another game. We don’t really talk a lot during the season just because we are so busy and when you’re home, you just want to be with your family and not talk about football. They’ve (the Riley family) embraced it though, and they’re fortunate enough to come almost every weekend to one of our games. It’ll be interesting to see who’s wearing which shirt when they come. They’ll probably have on a Kansas shirt and an Oklahoma hat or vice versa. They’ll split it, which is understandable. They’ve been great though, they’ve definitely seen a lot of ballgames in their time and they just keep going.