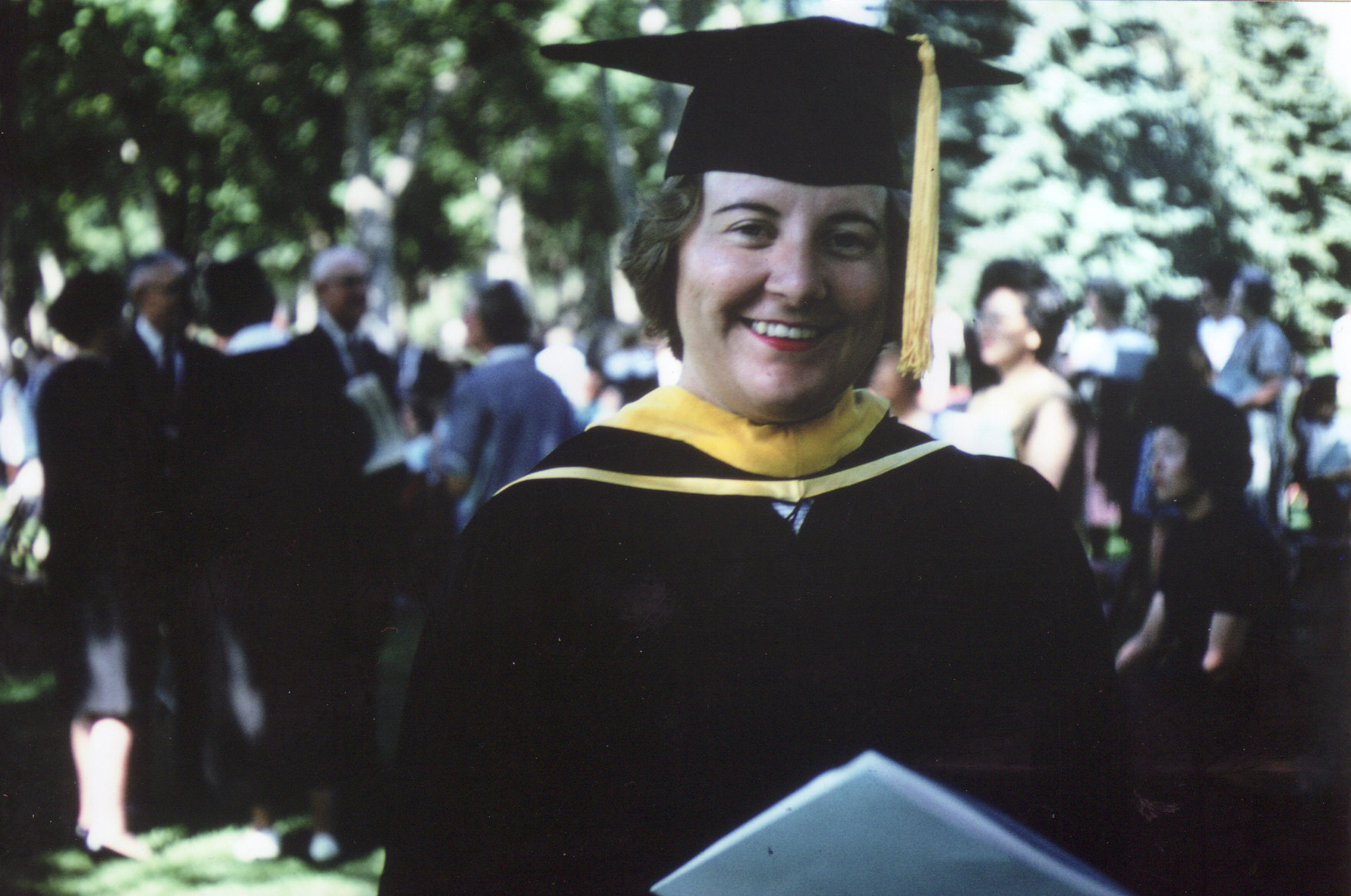 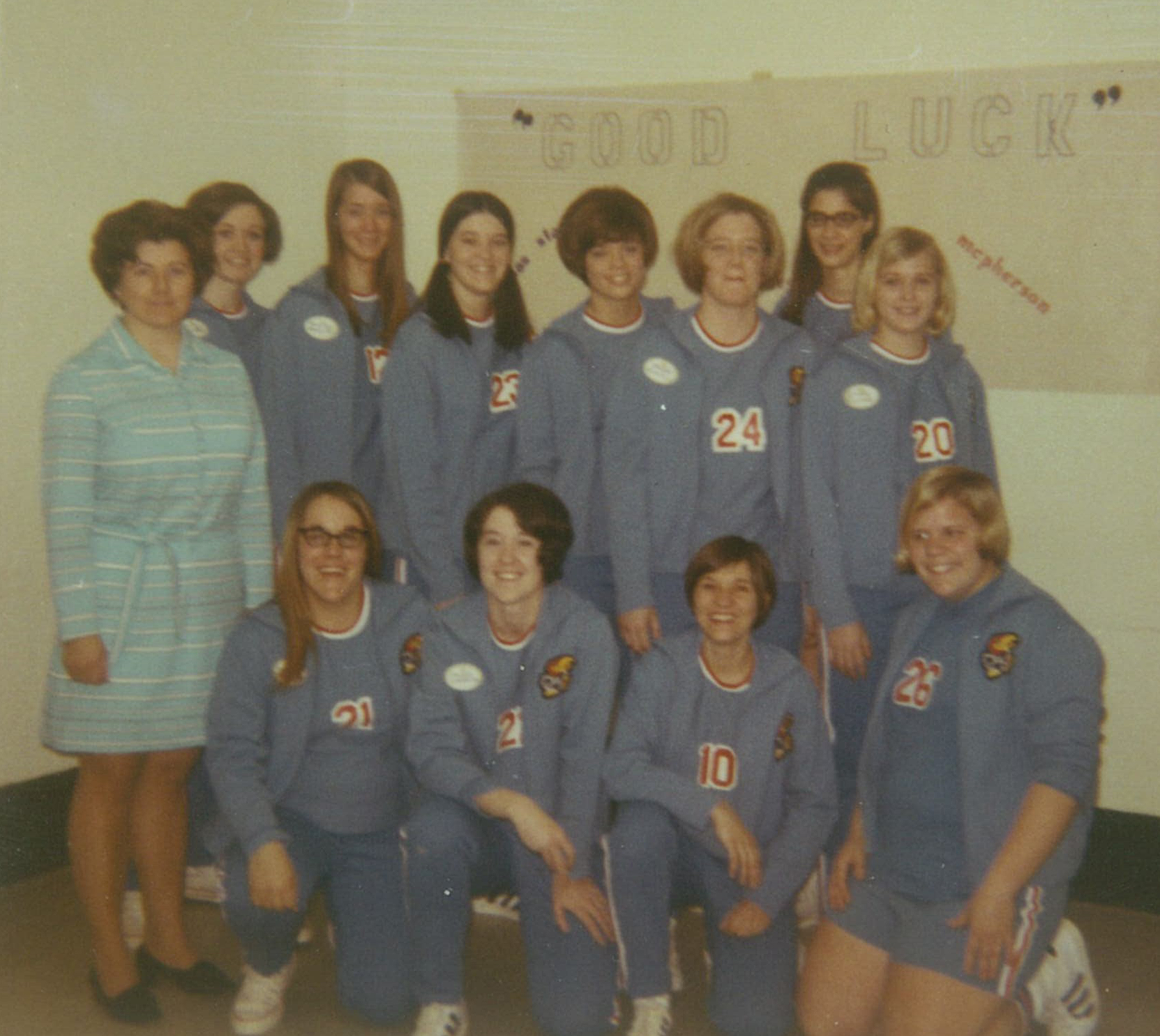 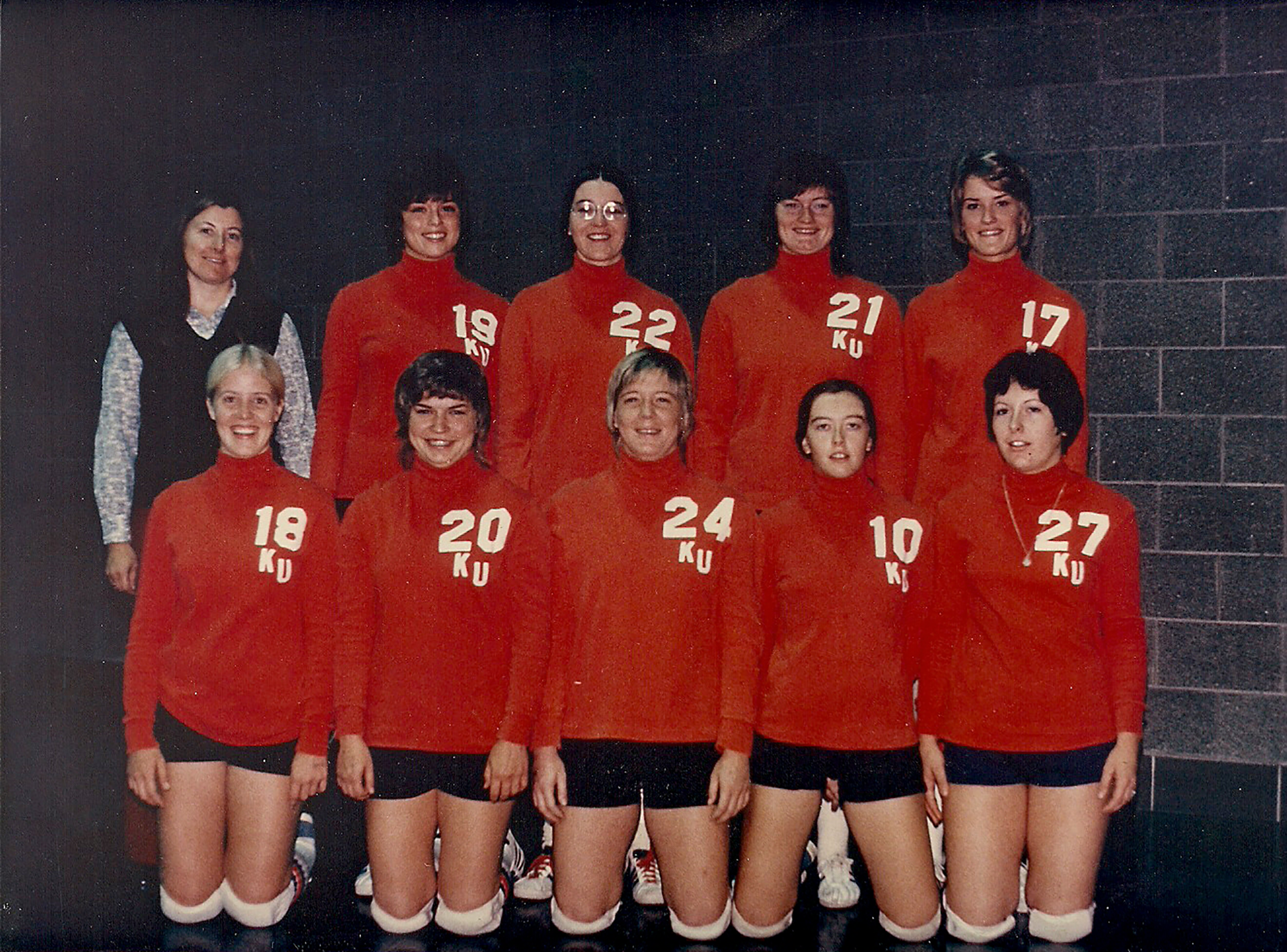 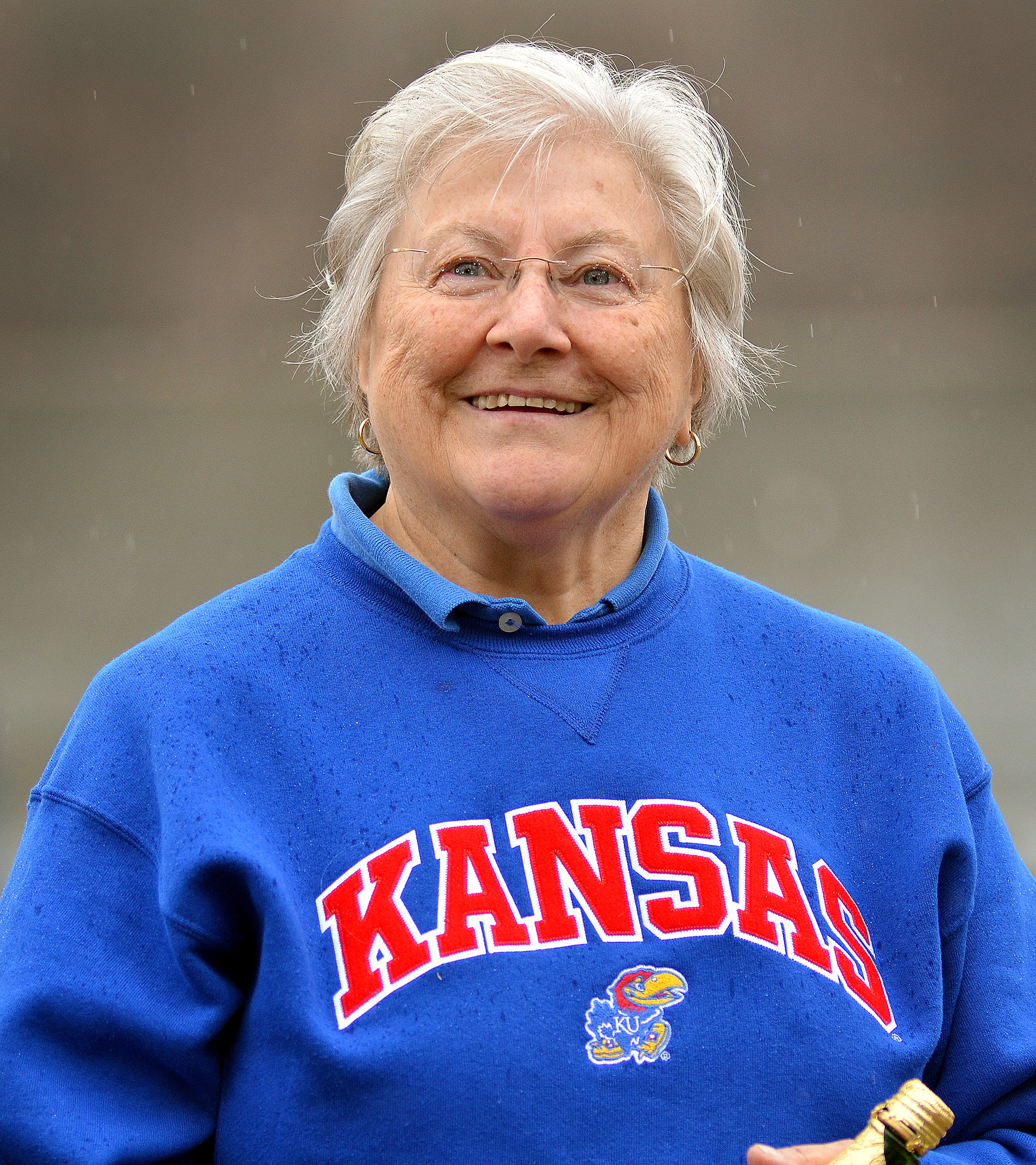 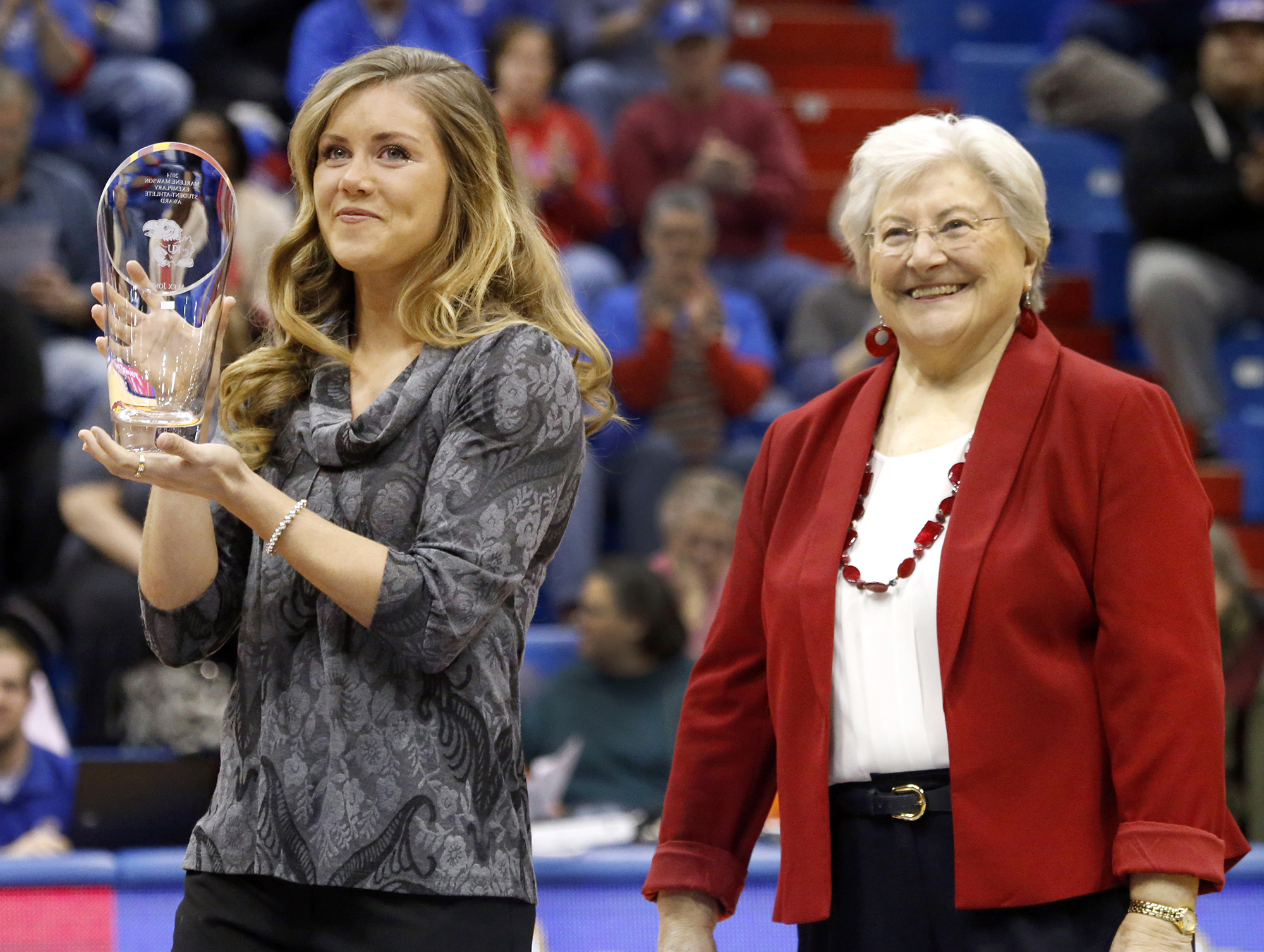 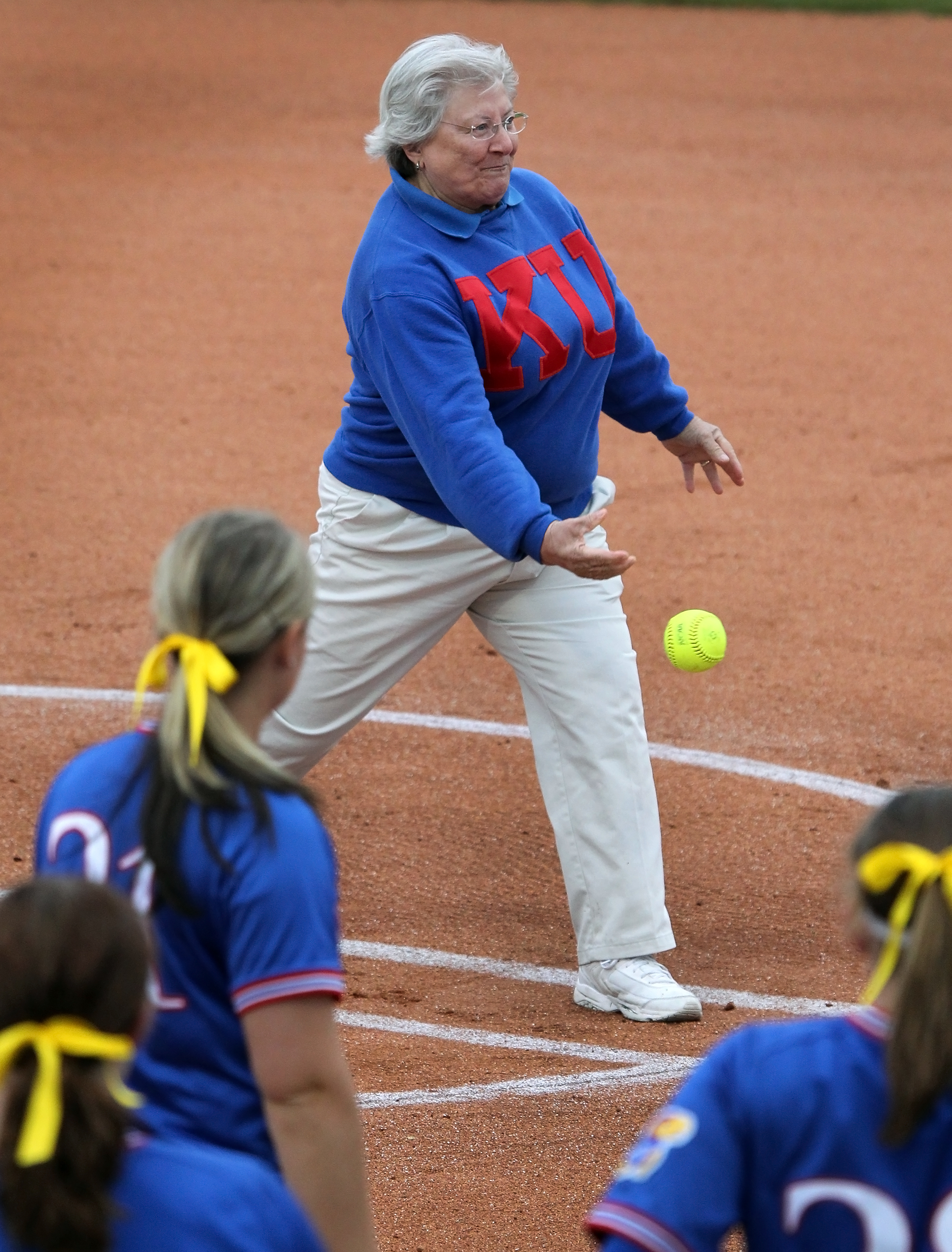 Q: You recently wrote an initial draft for your book titled, “Marlene’s Mission: Launching Women’s Athletics at the University of Kansas.” Where did that inspiration come from?
A: The reason I began writing this book is because of Candace Dunback, who is the Senior Director of K Club and Traditions at KU. She heard me speak on many occasions and asked if I’d written any of the stories down that I’ve told. Since I hadn’t, I decided to write the stories down and I realized the stories needed some context. Since I put in the context, I realized I had more than a simple story and that turned into 12 chapters.

Q: How did you get involved with speaking at KU?
A: Most of my experience has come from people who know my background and were interested in me sharing that with other people. I have addressed several sports management classes, graduate classes, and so forth over the years. As far as speaking at a public forum, the Welcome Club of Lawrence asked me to be a program speaker for them. I was very surprised because the only standing ovation and applause from that was usually some kind of theater or entertainment. When I was done speaking there, I received a standing ovation and I was overwhelmed thinking to myself, “I just told you my story.” When I taught at KU, the Kiwanis was a men’s service club. The department chair would take all of the men faculty out every Thursday afternoon but the women didn’t get to go. This was pre-Title IX, of course, but I don’t think it would have mattered because Title IX wouldn’t have covered that. It’s kind of a networking thing when it comes to speaking because people pass things on to other people, and so forth.

Q: You’re seen as a very influential and inspirational figure to a lot of people, so I’m wondering did you have your own “Marlene Mawson” growing up?
A: No, I didn’t. In terms of having a role model in women’s athletics, there weren’t any. My male physical education teacher in high school was the coach of every team because my high school was rather small. There were only 100 kids in high school, so there weren’t enough boys in high school to even field a football team. I grew up thinking girls could play the same sports as boys because we had an indoor sport in basketball, and an outdoor sport in softball. So I only had a coach who was a male, and he coached all the boys and girls’ teams. We all went on the same bus, and we didn’t know there was any discrimination until I went to college, where I learned they didn’t do this for girls after you got out of high school.

Q: What drives your competitive spirit?
A: I grew up as a twin. My twin was not competitive at all, and we were competitive with our sisters since I had seven siblings, who were all girls. My father always impressed on us that nobody was better than us, and that we could be the best we could be and that he expected that of us. It started with our older sister, he insisted that we would all go to college because funding for college is a better investment for us than him leaving us money. We all graduated from college, and my older sister was 20 years older than me, she went to school when women didn’t really go to school. My incentive and competitive spirit in sports and life is to always be striving to be the best that I can be. It may not be perfect, but I’m going to be as perfect as I can be.

Q: How far did your women’s budget of $2,000 go?
A: First of all, it sounds like just a penny now. You could buy a meal at a restaurant for $2.50, so you have to squeeze it into the time. We used it for uniforms, travel and entry fees into postseason tournaments. That’s basically what it covered and we borrowed equipment from the physical education department. Most of our expenses were turned in on travel allotment budgets, but we did have an initial expenditure for uniforms, which allowed us to purchase one set of uniforms for team members. Basketball, volleyball and softball were the only sports that used uniforms.

Q: Did you get the sense in 1972 that Title IX would be a groundbreaking moment?
A: I knew something big was happening. Across the country in 1972, there were workshops for the office of civil rights to explain the compliance rules to people who realized they would need to make major changes. Those major changes came in physical education and athletics as well as music. Generally, high schools and colleges had to be in compliance but it wasn’t until 1978 that this happened. So even though Title IX became law in 1972, the compliance regulations were written in 1973 so there were still five years where nobody had to be in compliance. There were basically gradual increments of compliance during those five years and in 1978 most universities weren’t in compliance.  The women’s athletic director at K-State was the first to launch a lawsuit on her own university for not being in compliance. Fifty more colleges filed suit in that same month, July 1978. From there, the office of civil rights changed the compliance rules and said, “Well, I guess you don’t have to be in compliance this date. As long as you’re showing progress towards compliance, we won’t charge you with sending federal funds to your university.” It took almost decade for the law to be enforced for Title IX.

Q: What kind of bond was there between coach/student in the 1960s?
A: Well, you coached your own team. We didn’t have coaching meetings because we taught all day together. If there was a bond, it was a matter of being a part of a physical education department and the extra duty was the athletics part. When you took your team some place, you didn’t have room for more coaches to come along. You used to get compensation for the number of vehicles you could crowd your team into so you didn’t have an athletic trainer or equipment person to come along. There’s more people helping now than there are on the team. So, I was basically doing all of it.

Q: Who was your greatest male supporter at KU over the years?
A: Probably Henry Shenk. He was the department chair who hired me and the department chair of physical education. He agreed to put $2,000 into women’s athletics and whatever I asked him, he was willing to provide as long as there were budgeted funds for it. He took out funds from his own departmental budget to help me. There were men who didn’t oppose you up front, but they didn’t help either. As long as you weren’t in their way, go ahead and do it. When I started this program on campus, there were two gyms in Robinson and one court in Allen Fieldhouse and that was it on campus. The men and women’s intramural programs, as well as women’s athletics, had to use those Robinson courts. We’re talking about two courts and that’s why there was some confrontation when men used to be on the court when it was our time to practice. Sometimes I had to say, “Hey, your time’s up.”

Q: Would you say there was any outright discrimination toward you?
A: I wouldn’t say discrimination, it’s more of confrontation. More of, “We wanted to practice here, why is there gymnastics equipment on the floor?” So if I ever had confrontation, it was usually with Bob Lockwood, who is my great friend now. We were friends then and he was my colleague who taught in the same department as me. He needed the Robinson space and I needed the space, so that’s all it was.

Q: Can you describe the feeling of being inducted into the Hall of Fame in 2009 and walking across James Naismith Court?
A: The first time it was rather overwhelming to me was when they inducted me into the KU Hall of Fame. I was standing out there and realizing that this happened a long time ago, but it’s just now becoming important. I’m thinking that when I did what I did, it wasn’t with the idea that I would be standing here. It was with the idea that women athletes would be on this court, not with the idea that it would be me. I guess that sums up how I felt. The first time I really was acknowledged was in 2008 when they started the Marlene Mawson Exemplary Student-Athlete Award and it showed me it’s all about the athlete.

Q: Do you consider yourself a pioneer in sports?
A: I don’t know if I thought about it that way back then, but then KU gave me the Emily Taylor Pioneer of the Year. So that’s when I first thought about that word, “Pioneer.”

Q: What do you think your role will be now in this modern age of collegiate sports and women’s athletics?
A: I think that maybe what you said earlier about a mentor is that if anything, I want to be an example or a (role) model for young women. I think of all the KU athletes who are greater in fame than me like Joan Wells, who went on to Lawrence High School and won 17 state championships in volleyball. She was one of the players who played when I coached and I always put her in the serving position because she was a steady, competitive person. She had a great influence as a captain on the team. At one time, I had three students I had in grad school who were coaching at the Division I level. People look at me as a mentor, but I look at them as the pros who went on after college.

Q: Do you go to a lot of KU sports during the school year?
A: Oh, I go to everything (laughs). I go to volleyball, basketball, soccer and softball. I try to sit up high enough in the stands so they don’t hear me coaching.

Q: Is that the coach in you who brings you back to these games?
A: Well, when you know the game and the strategies they’re using, you follow the players not even based on their numbers, but on the way they move. It’s the way you see the game as a coach and to get well-acquainted with them. It’s how you feel it, and you miss it when it’s not there.

Q: What are your thoughts on Rock Chalk Park?
A: I watched the construction up there, and I was really glad this was happening. When it got to the point when they were laying the turf down, I had the opportunity to walk up the ramp where you can see both the soccer and softball fields. It just took my breath away. It was thrilling to see that these two terrific facilities were built just for women. It wasn’t a hand me down or share with somebody else. They were for our KU teams. I think back to softball –we played on the field where the sand volleyball courts are now. The field hockey field was where the computer science building was. None of the fields were leveled, so there was a slope going end to end. Think of trying to hit a baseball along the ground where the field was turf but not planted. It was a clumpy field. So I’m walking up the ramp (at RCP) thinking, “Wow, can you even believe it? Could you even have imagined this could be?” It was just thrilling.