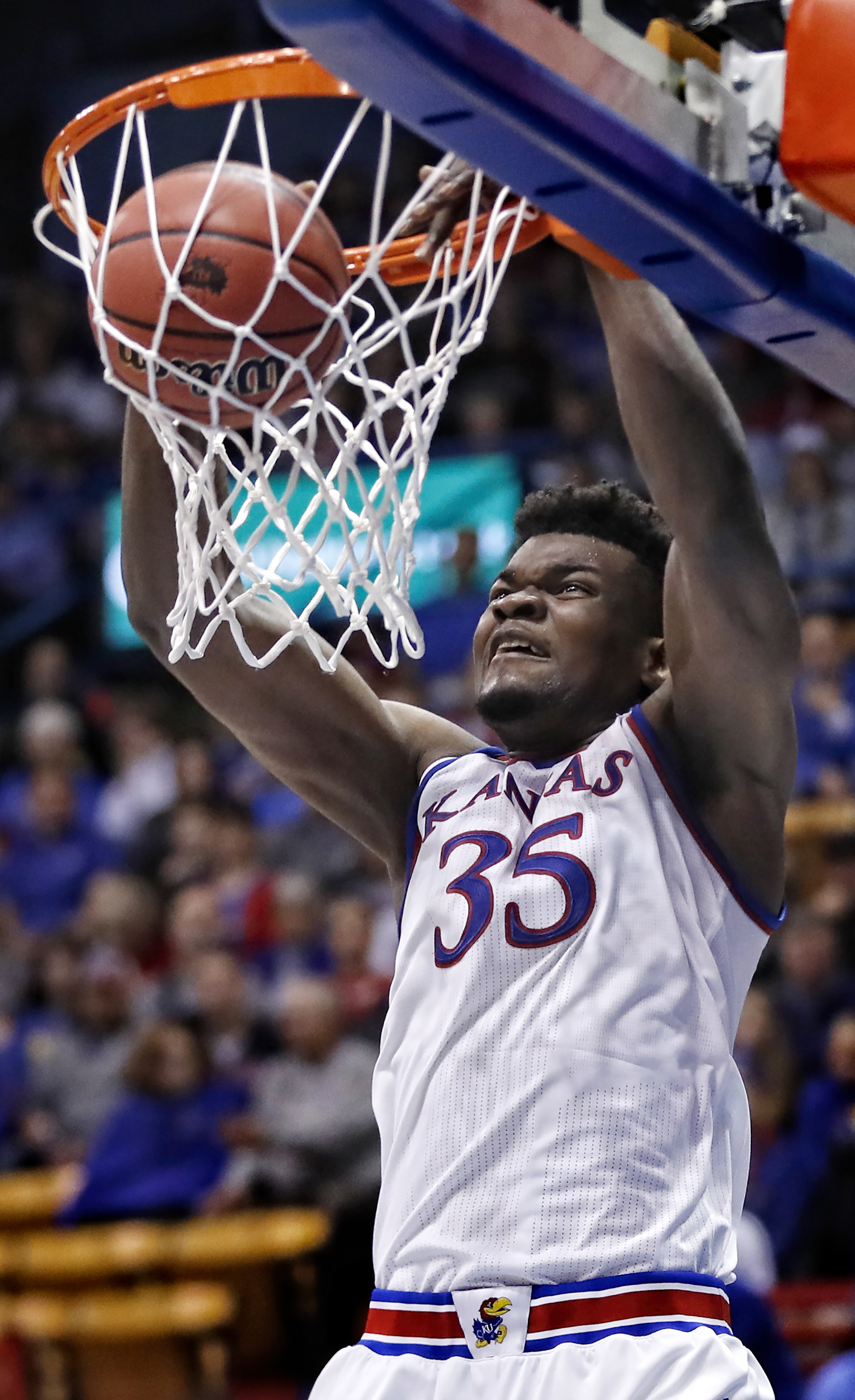 Kansas sophomore center, Udoka Azubuike, is a native of Delta, Nigeria. Prior to high school, the 7-footer made the move from his home country to the United States, which was a big one.  However, the adjustment has been manageable for KU’s big man as the years have passed. After picking up the game of basketball in the ninth grade while living in Florida, Azubuike quickly made a name for himself on the court. Not only were the teams he played on at Potter’s House Christian Academy (Jacksonville, Fla.) successful with Azubuike as a member, but he was flourishing individually as well. After averaging big numbers for Potter’s House all four years of his high school career, he was selected for and played in some of the most lucrative all-star games for prep players who are aiming to play at the Division I level.

After showing people around the nation what he could do on the hardwood, Azubuike was named a McDonald’s All-American, the 40th to come to the University of Kansas to continue his basketball career at the collegiate level, under head coach Bill Self and his staff.

In his freshman season donning the Crimson and Blue for Kansas, Azubuike started in six of the 11 games he played in before suffering a season-ending wrist injury on Dec. 21, 2016. At the time of his injury, KU’s No. 35 had started six-straight games and led the Jayhawks with 18 blocked shots. In his (shortened) freshman season at KU, he ended up with averages of 12.9 minutes, 5.0 points, 4.4 rebounds, 1.6 blocks, and a 62.9 field goal percentage.

After having to sit out most of his freshman campaign due to his injury, Azubuike worked hard in the offseason so that he could come back bigger, better and stronger than ever in 2017-18. Only 15 games into the season, he’s certainly made himself a household name in the frontcourt for Kansas, putting up big numbers in all areas of his game. KU’s big man is currently averaging 14.9 points per game, pulling down a team-best 7.9 rebounds per game, is second among Jayhawks with 20 blocked shots on the season and is shooting an astounding 76.5 percent from the field (104-of-136). His shooting percentage not only leads the Jayhawks, but the Big 12 Conference as well. In addition, he sits second among all players in NCAA Division I men’s basketball at this point in the 2017-18 season. And it seems as though this is where Azubuike’s collegiate basketball career has only just begun to take off.

Q: How would you describe the culture adjustment from Nigeria to the United States?
It’s pretty different. Nigeria is pretty diverse, especially with languages. In the United States, pretty much everybody speaks only one language, which is English, most of the time. So that definitely makes it different. The culture, the way of life, the way they live over there ([in Nigeria] is also different).

Q: Has it been easy for you to adjust?
In the beginning, I kind of found it difficult to adjust, but now I’ve gotten used to it. The more I’m here, the more I get used to the differences.

Q: What are the biggest differences country to country?
Language, like I said before, is a major part of it. Religion is big too because everyone has their own religions and their own beliefs. All the different kinds of foods and then all the different seasons of the weather are also some big ones. Those were probably the biggest changes between Nigeria and the United States.

Q: What were the biggest transitions for you from high school to college?
Time management is a big part of it. In high school, everything is pretty much set for you during the day. But in college, you have things at certain times but you have to do a lot on your own; like waking up, you don’t have anyone doing that for you anymore. In high school, you have your parents around; but here you don’t, so you have to adjust to the settings and use your time wisely.

Q: Although you’re just in your sophomore year at KU, what do you envision leaving as your legacy here, as a true center under Bill Self?
I want to leave my mark as a winner because everybody that comes to KU wins, so I want to do the same. I also want to be remembered as competitive and for doing my part. I also want to be known for being a good person, on and off the court.