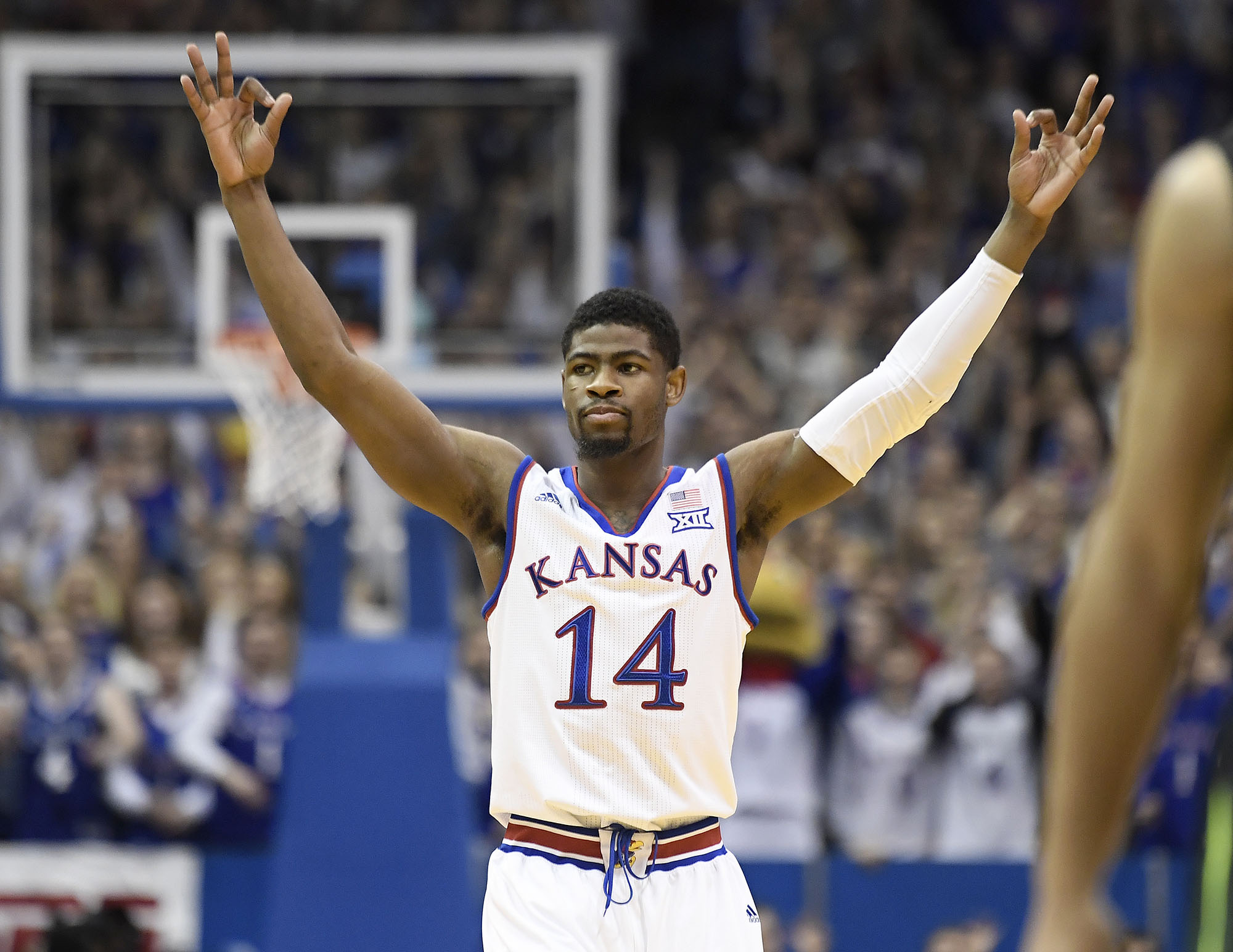 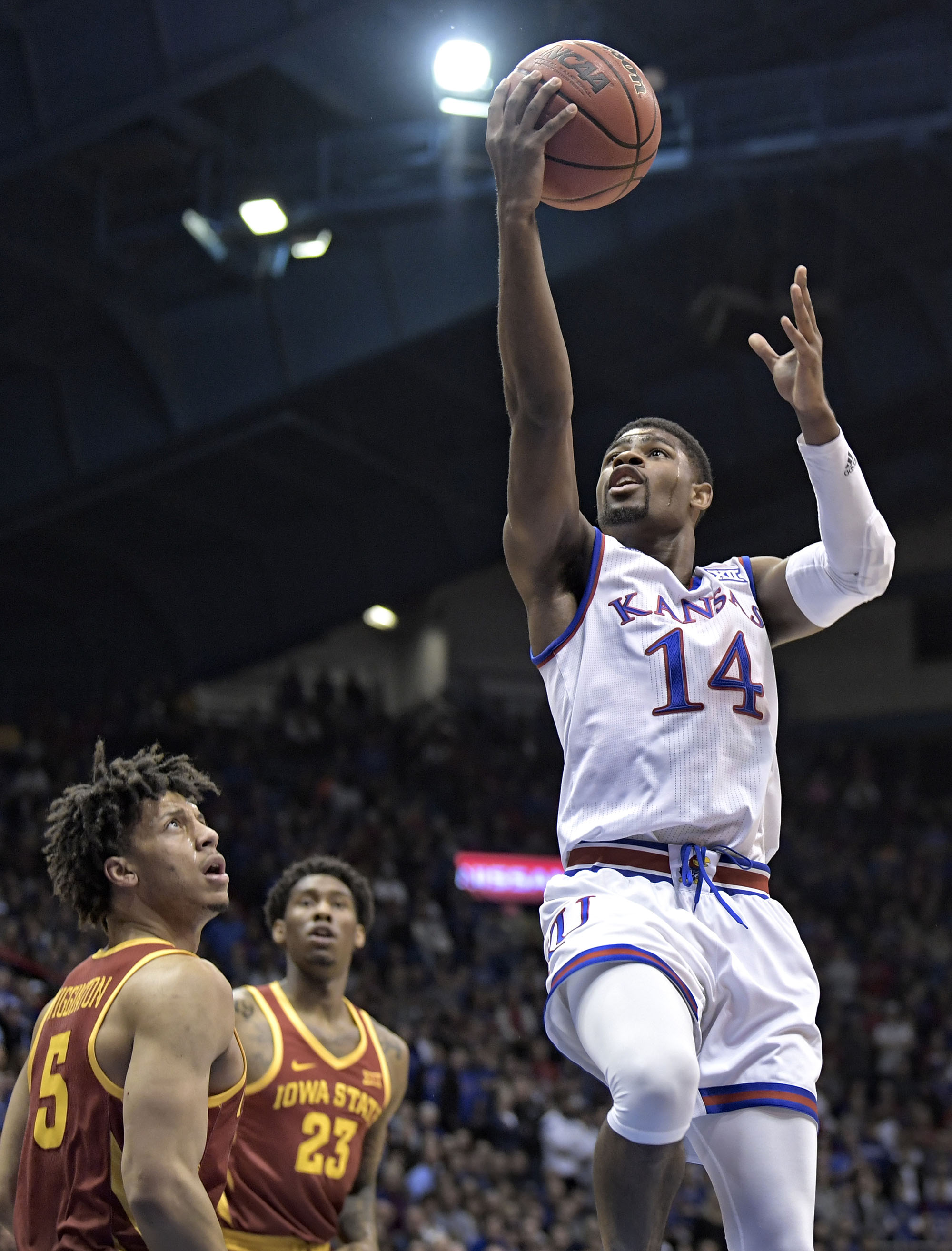 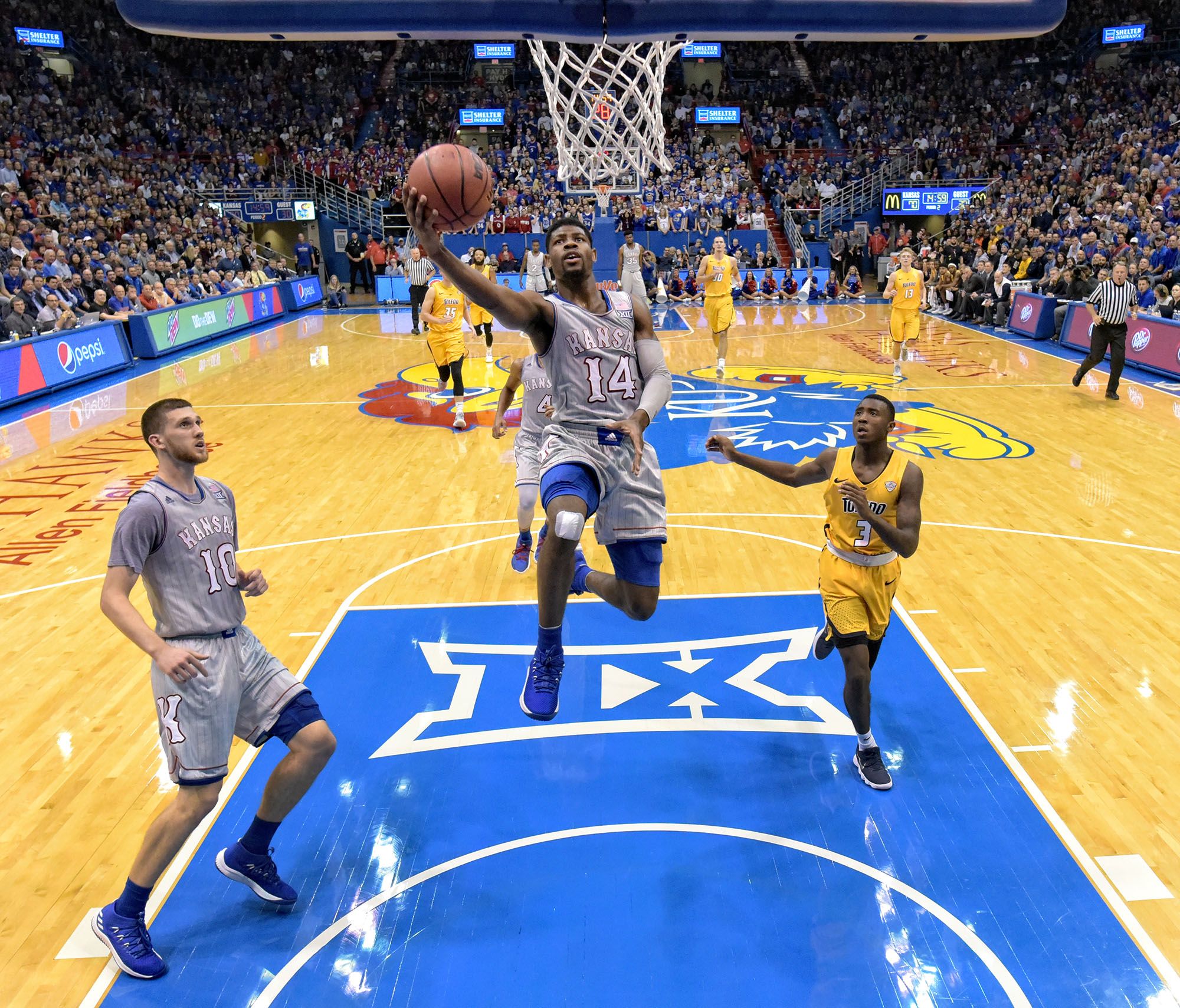 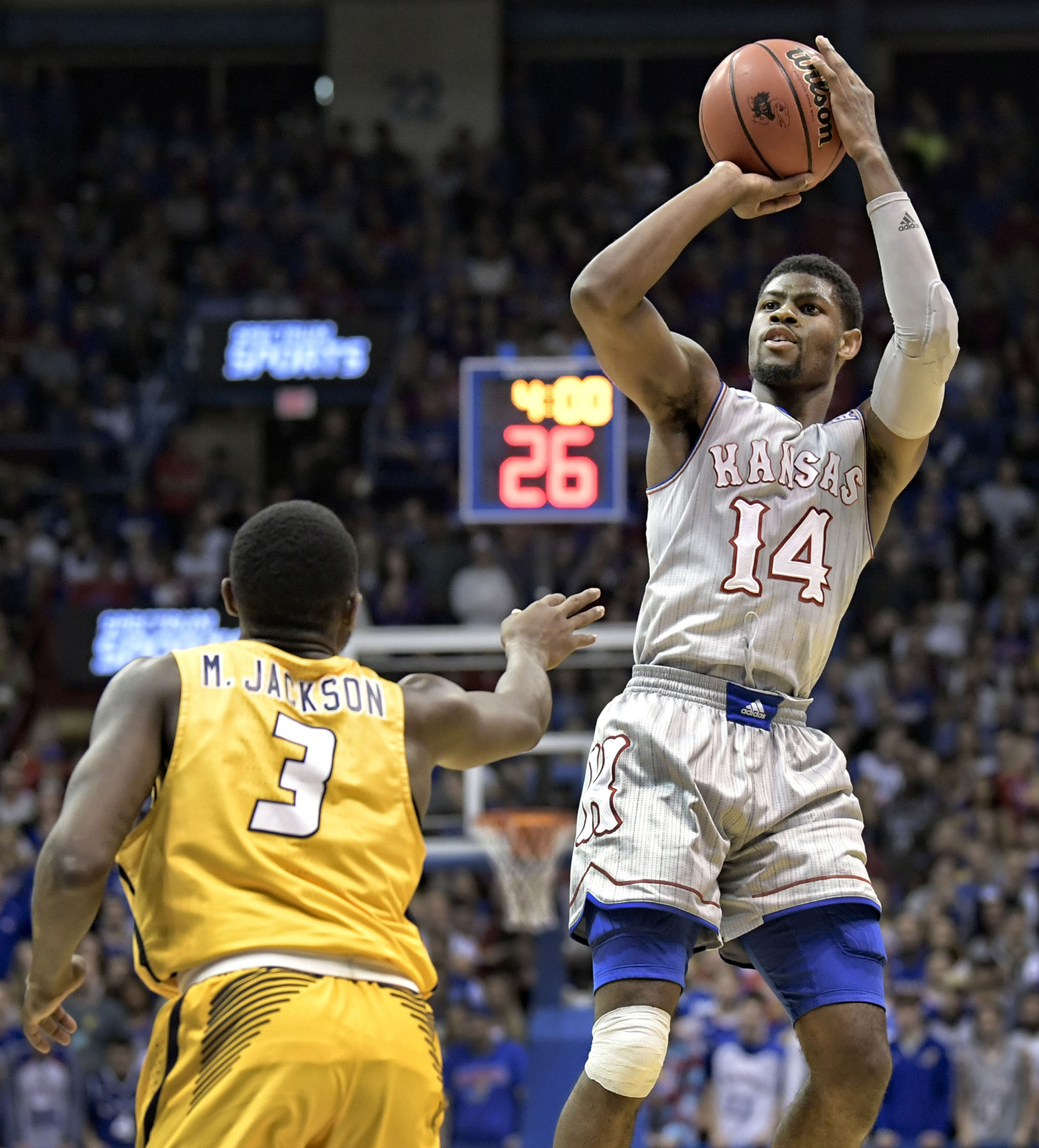 Malik Newman has already gone through a long journey in his brief collegiate career. Newman was one of the most highly recruited players out of high school in 2014-15, ranked No. 10 by ESPN. One of the biggest aspects that made him such a highly sought after player was his experience with USA Basketball. With two years as part of the FIBA American U16  U17 teams, Newman helped win two gold medals, claiming MVP honors both years. The Team USA experience had a huge impact on Newman’s development and his preparations for Division I basketball.

“Being around so many talented guys, you have to learn how to run a team that is so highly talented,” Newman said. “It helped me when I came to college because all of us were highly recruited, all of us were high Division I prospects, so I kind of already knew what to expect.”

“(It was) A small portion of it, not really a whole lot,” said Newman. “I did look into it and the legacy he had. I did look at it as if I did go there it would be cool to carry his legacy on. It was not the main decision.”

Growing up in Shreveport, Louisiana, the transition to Starkville, Mississippi, was not easy. The transition from being in a large city to going to a small town without his family and friends was unique for Newman.

“It was very different,” said Newman of Starkville. “Shreveport was much bigger, there were more things to do, I had many family and friends there. When I got to Starkville it felt like it was just me and my teammates. It was a small town, so it was a big difference.”

Having the luxury of having someone as close to, and as knowledgeable about playing basketball at Mississippi State,  Newman had his father to help guide him,

“‘Go out there and play my hardest each and every night,'” Newman recalls his father telling him. “‘Take advantage of the situation and each opportunity and go have fun.'”

In his freshman season at Mississippi State, Newman appeared in all 29 games with starts in 21 of those contests. He finished the season averaging 11.3 points per game and scored in double figures in 16 games. Despite scoring the 10th-most points in Mississippi State history for a freshman, Newman still felt uncomfortable in Starkville, and ultimately decided to transfer.

“I was just not comfortable in the situation,” said Newman. “I felt like (compared to) the situation I was in, I could have been in a better situation.”

Newman chose the University of Kansas over all of the other schools which recruited him after he decided to transfer following his freshman season. Newman had an interest in the rich history and tradition of Kansas basketball, and the coaching staff helped use both elements to recruit Newman.

“I think the winning tradition and the history of Kansas basketball helped Malik decide to pick Kansas,” said assistant coach Jerrance Howard. “He always was comfortable and had a good relationship with Coach (Bill) Self when he was in high school. I thought when things did not go right at Mississippi State, he knew he wanted to be here.”

Another aspect which stuck out to Newman in his decision of picking Kansas was how Self developed guards.

“The history of the program,” said Newman. “I think he (Self) was doing a wonderful job with the way he played his guards, the guys he had coming back with Devonte’ Graham and Svi (Sviatoslav Mykhailiuk), and Coach Howard. Coach Howard, he did a great job when I told him I wanted to leave (Mississippi State) of re-recruiting me, making me feel wanted again.”

Freedom and development of guard play by Self, along with the rest of the Kansas coaching staff, has a huge impact when recruiting the top guards in the nation year-by-year.

“Freedom, it is a lot of freedom to just let them play with an open mind,” said Howard. “Also, knowing that he was going to sit out that he could get better and compete against two of the best guards in the country in Devonte’ and Frank (Mason III). I think that is what sticks out and attracted him (to KU), is the freedom Coach Self gives the guards.”

Sitting out during his transfer year was a learning experience for Newman. Practicing with the team in 2016-17, Newman learned what Self looked for in his guard play, especially when it came to being a leader.

“I learned more about the guard position, and how Coach Self wanted things to be done,” said Newman. “Learning how to be more of a leader vocally on the court, not just talking but actually doing it. Everything else was improving skill-wise to become a better player.”

The Kansas basketball team has gone through more ups and downs during 2017-18 than in previous seasons, and like the rest of the team, Newman has gone through his own personal peaks and valleys throughout the year. One key component in Newman’s improvement this season has been his giving more energy and effort when it comes to defense.

“Well, I think he has from an effort and energy standpoint and guarding,” said Howard on Newman’s development this season. “Just the little things; he has been a natural scorer all his life. Here, he has learned how to guard. He is a good rebounder, always has been. (It’s) Just those little things as far as competing on the defensive end. I think that is definitely where he has improved the most.”

A large factor of the improvement in Newman’s season has been his assist numbers being up and turnovers being down.

“I think he is playing a lot better (now) than he did earlier in the Big 12 season, without question,” said Self. “We were really laboring and struggling in a couple of spots. I think he has played really well. I am proud of him. I do think his ball handling has gotten better, it maybe correlates to scoring a little more, but I think he is becoming more of a complete player.”

Making sure he is getting his teammates involved has helped Newman and the rest of the team get through the struggles of the season, including losing three games in Allen Fieldhouse. Newman’s main focus has been to help the team succeed. Newman has been a vital piece for Kansas this year helping win the Big 12 Conference regular-season title

“Stay aggressive, to keep making plays for myself and my teammates,” said Newman of how he believes he has helped the team so far this season, leading into postseason play. “I think everything else will take care of itself. It has been up and down, but I think we have been doing a great job of getting through it. We have to keep growing as a team.”

And the team has progressed as the season moves along, having finished regular-season play with a 24-7 record. In addition, the Jayhawks went 13-5 in Big 12 Conference action, claiming their 14th-straight league title outright and they enter this week’s Phillips 66 Big 12 Men’s Basketball Conference Championship as the No. 1 seed. As the team has advanced together, Newman’s individual continued improvement, due to his high energy and effort, has shown as he was named the Big 12 Newcomer of the Year on March 4, as voted on by the league’s head coaches.

“To me, Malik can have that Malik personality and have energy,” said Howard. “Everybody knows he can score and shoot the basketball, but doing the little things like guarding and rebounding and getting the hustle plays, deflections, (are) just the little things that will only show up in the box score.”

Continuing to improve as the season moves along through playing with high energy could set up the possibility for Newman to go to the National Basketball Association (NBA).

In 2016, Newman tested the draft without an agent before coming to Kansas. This practice has been a common choice for players all over the country, including at Kansas. Most recently, senior guard Sviatoslav Mykhailiuk decided to test the draft before choosing to come back to Kansas for this, his senior season. For Newman, his whole focus has been on finishing the Jayhawks’ season out strong before he even thinks about the possibility of turning professional.

“Honestly, I have not even been thinking about what is going to happen after the season,” said Newman. “Right now, I have been focused on this season and trying to take it game after game, not trying to think too far ahead.”

Newman went on to mention the areas of his game that he believes he would need to improve before he would try to enter the NBA draft.

“My on-ball point guard skills and my athleticism; those are the two main things,” he said. An additional piece to help Newman and his draft stock will be to perform well in the Big 12 and NCAA tournaments.

As Newman becomes more and more comfortable in the Kansas system, the level of his game will continue to rise. And that bodes well for the Jayhawks as they head into the most important month of the college basketball season, March.